Living with fire in the Pyrocene

Fire has played a pivotal role in almost all landscapes across Australia for millions of years. The continent of Australia is a cultural and natural landscape: it has been shaped by First Nations peoples for many hundreds of generations. Colonisation disrupted this long management and now settler society is trying to understand how fire should be used in the landscape to manage it for biodiversity, asset protection, and human safety. 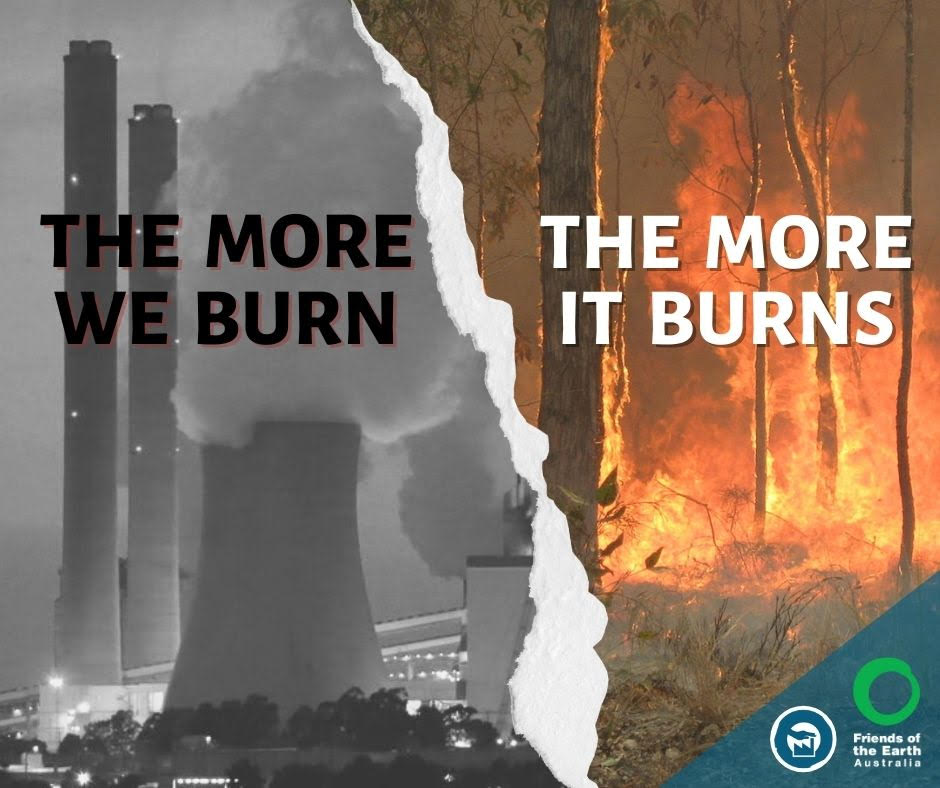 One key tool used to manage fire risk is fuel reduction (or hazard reduction) burning. While often presented as a panacea for fires, it requires a complex and nuanced application to be safe and effective. But many vocal proponents of fuel reduction burning see it as a blunt instrument that can - and should be - applied across all forested landscapes frequently. As we know, the natural world is a complex place. When using a tool with such large implications as fire, we need an equally complex approach rather than a blanket ‘we must burn the bush’ mantra.

As we head into the warmer months, we will explore some of the issues at play as we, as a society, grapple with how to respond to and manage fire in a time of climate change.

There is no doubt that climate change is driving more intense fire seasons. The world has warmed as a result of human activity and now all fire events occur in a warmer environment. This is well documented, and climate change is leading to longer fire seasons, with more frequent dry lightning storms in some areas. We have known this for years. Back in 2008 the Garnaut Climate Change Review's final report, said that predictions "suggest that fire seasons will start earlier, end slightly later, and generally be more intense” and that "this effect increases over time, but should be directly observable by 2020."

More recently, the Emergency Leaders for Climate Action noted that:

‘Australia’s Black Summer fires over 2019 and 2020 were unprecedented in scale and levels of destruction. Fuelled by climate change, the hottest and driest year ever recorded resulted in fires that burned through land two-and-a-half times the size of Tasmania (more than 17 million hectares), killed more than a billion animals, and affected nearly 80 percent of Australians. This included the tragic loss of over 450 lives from the fires and smoke, more than 3,000 homes were destroyed, and thousands of other buildings. While unprecedented, this tragedy was not unforeseen, nor unexpected.’

The influence of climate change has also been acknowledged in recent investigations into the 2019/20 fires. For instance: 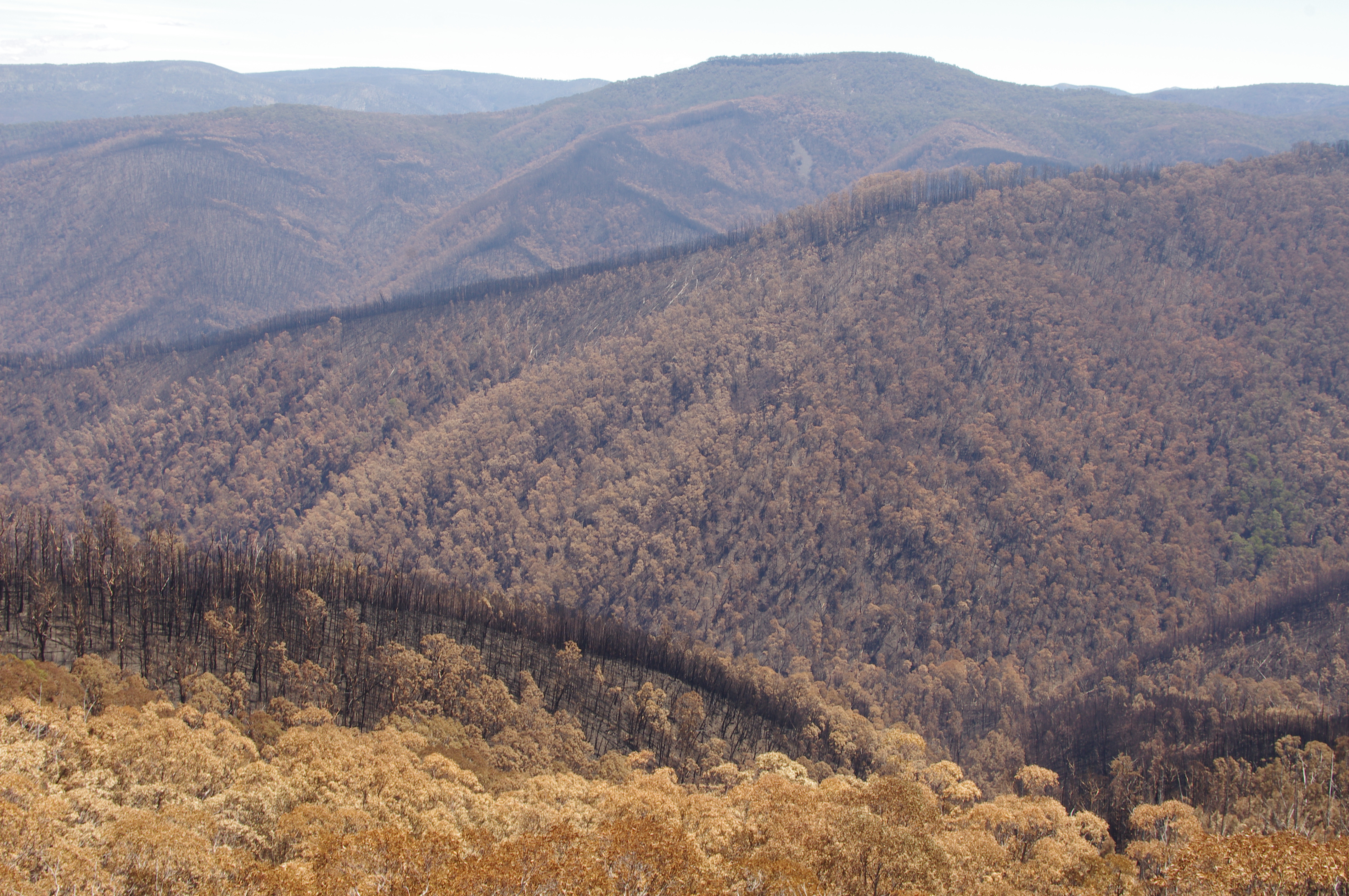 The Bushfire Royal Commission was explicitly asked to look at mitigation options, but not drivers of global heating. In spite of this, it found that further warming of the Australian climate over the next 20 years “appears to be inevitable,” it said, meaning that catastrophic bushfire conditions will become more common and traditional bushfire protection models and firefighting techniques will be “less effective”.

The NSW Bushfire Inquiry found that “climate change as a result of increased greenhouse gas emissions clearly played a role in the conditions that led up to the fires and in the unrelenting conditions that supported the fires to spread” and “The season showed us what damage megafires can do and how dangerous they can be for communities and firefighters. And it is clear that we should expect fire seasons like 2019-20, or potentially worse, to happen again.

And in Victoria, the Inspector-General for Emergency Management was charged with investigating Victoria’s preparedness for the fire season, and response to fires clearly identified climate change as being an issue of significance. The IGEM report noted that:

'The past is no longer a reliable guide to the influence of climate and weather upon bushfires into the future. Climate change is influencing the patterns of natural hazards globally. In Australia, increases in temperature and changes in rainfall patterns are contributing to an increase in extreme fire weather across much of the country. In south-east Australia there have been long-term decreases in rainfall. The bushfire season in the 21st century begins earlier and ends later.'

We are pleased to see that, since the 2019/20 fire season there is much more coverage in the mainstream media that makes the links between climate change and worsening fire seasons, including coverage of the terrible northern hemisphere fire season in the northern hemisphere during 2021. However, climate deniers are unable to accept this particular reality, and are trying to deflect the public debate into a ‘blame’ frame which lets the fossil fuel companies and their backers in government off the hook. It also plays on people’s natural fear of wildfire to try and wedge the community away from environmental voices into a right wing world view that sees the solution to bad fires as primarily being fuel reduction burning.

Bushfires and the culture wars

Once bushfires are raging, the ‘it’s the greenies’ fault because they stopped us from doing fuel reduction burns’ line will be wheeled out by many voices and amplified on social media and the Murdoch press.

Another favourite angle pushed by conservative media is that the fires are the fault of arsonists. While arson is a serious problem, it is only responsible for a small proportion of wild fires. Focusing on the threat of arson leads to break down of community cohesion and so is inherently destructive. It is also patently untrue to claim that arson is a major cause of fires in Australia.

Others will claim we should increase logging of native forests or allow cattle grazing on public lands. These demands usually come from people or organisations with a vested interest in seeing such an outcome, and don't stand up to scrutiny.

It’s worth preparing yourself for these arguments. Here is our perspective on fires, arson and fuel reduction.

Check here for some notes and links about the connection between climate change and fire risk.

The Victorian Traditional Owners Cultural Fire Strategy outlines six core principles  that underpin cultural burning practises in the state. We would encourage the state government to continue to develop cultural burning programs with traditional owner groups. Groups that are already engaged in Cultural Burning programs, such as the Dja Dja Wurrung in Central Victoria, could be resourced to share knowledge with other traditional owner groups.

What should we do?

How do we respond to longer, more intense fire seasons?

Of course, we need to act decisively to reduce Australia’s contribution to climate change. Without co-ordinated global action to radically reduce emissions, we will face ever worse fire seasons. 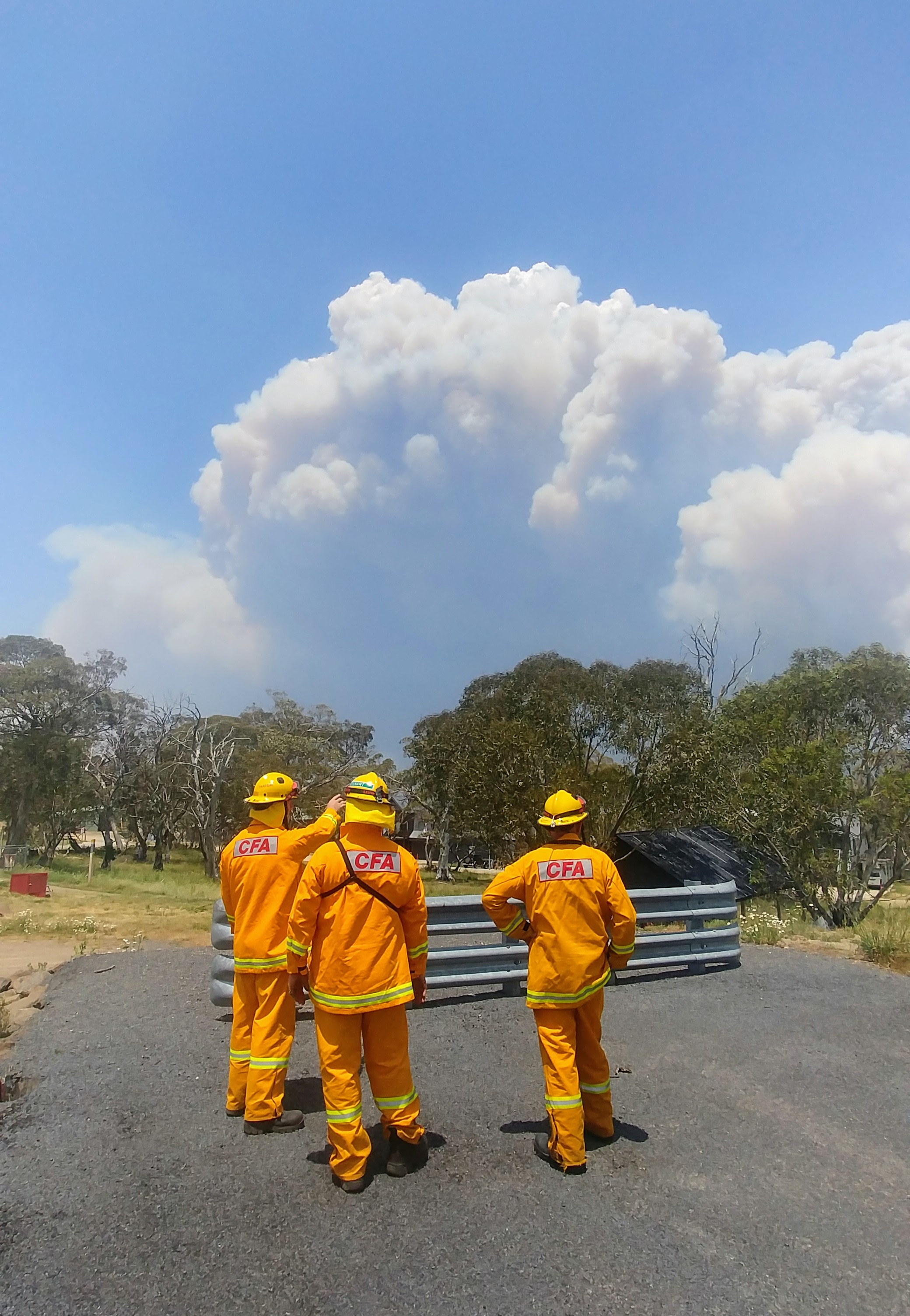 But even with meaningful climate action, we are locked into many decades of climate change. It is clear that we need additional resources to fight the fires that will come in future seasons. Here are some of our ideas:

Here is a list of proposals from Friends of the Earth Melbourne. These are specific proposals for Victoria.

The Victorian government already funds a large firefighting force through Forest Fire Management Victoria, or FFMV. This includes crews who have special training and are tasked with working in remote areas like our national parks. The government has increased funding for firefighting efforts. However, it is essential that we commit to creating additional remote area crews.

We should be opening up volunteer opportunities for people based in large cities to get involved in firefighting efforts.

The federal government should establish a national remote area firefighting force which can be deployed as needed across Tasmania and mainland states when World Heritage and National Parks are at risk. This was recommended by a Senate inquiry after the devastating fires in Tasmania of 2016.

With fire seasons getting longer and more intense, we will need more planes and helicopters to fight fire. At present, most of these are leased, either within Australia or from overseas. Details here.

The recent Bushfire Royal Commission report recommends the creation of a national aerial firefighting fleet, which can then be allocated to the states "according to greatest national need". As fire seasons get longer in both the northern and southern hemispheres, it is essential that we build a publicly owned air fleet of Large Air Tankers (LATs) and Type 1 helicopters. At present we only own one LAT - the remainder are leased internationally.

Please sign our letter to the PM urging him to establish a national, publicly owned fleet.

Our report An Icon at Risk (available here) highlights the threats to a range of fire sensitive communities, including peatlands, Snow Gums and Alpine Ash. The report calls on the state government to:

You can add your voice to this call via this letter to the Environment Minister.

Over June and July 2020, Emergency Leaders for Climate Action (ELCA) hosted Australia’s first virtual bushfire and climate change summit to coordinate a national response to the Australian climate and bushfire crises. The 2020 National Bushfire and Climate Summit brought together hundreds of participants from across the country, and the world, to share their experiences, and to formulate recommendations to address the worsening risk of devastating bushfires fuelled by climate change. The Australian Bushfire and Climate Plan is the culmination of that effort.

The Australian Bushfire and Climate Plan provides a broad plan and practical ideas for governments, fire and land management agencies and communities to help us mitigate and adapt to worsening fire conditions.

The plan’s 165 recommendations include many measures that can be implemented right now, to ensure communities are better protected. They cover response to fire, readiness for fire, and recovery and resilience.

We will be sharing a series of stories through summer, looking at land management, firefighting, community resilience, and much more. Newer material is towards the end of this section.

Gondwana lost. Tasmania's tragedy touches us all. A response to the devastating fires of 2016. Wild magazine. 2016 (Link).

A volunteer fire fighting force for Victoria. Both NSW and Tasmania have volunteer teams who work with career firefighters to stop fires in remote areas like national parks. We think it's time Victoria set up a team. Details here.

Living in the Pyrocene. Podcast of Dirt Radio (3CR community radio program). Friends of the Earth campaign coordinator Cam Walker and Megan Williams talk about the increasing intensity and frequency of fires at home and overseas. What might come from the bushfire royal commission and what needs to be done mitigate and adapt in this changing world. OCT 2020. (Link).

A statement with Bushfire Survivors for Climate Action, to mark the release of the final report of the Royal Commission into the fires. OCT 2020. (Link).

A continent that burns. And a world that’s getting hotter. Welcome to the Pyrocene. Arena magazine, OCT 2020. (Link).

An Icon at Risk: new and emerging threats to the Victorian High Country. This report from Friends of the Earth has a strong focus on the threat posed to alpine and sub alpine environments by climate-driven fire seasons. July 2021. (Link).

Getting ready for the next Big One. A look at what the 2021 fire season in the northern hemisphere means for firefighting efforts in Australia. August 2021. (Link).

Climate change and the rise of the Megafire. looking at recent CSIRO research, which shows that climate change has driven a ‘significant increase’ in Australia’s forest fire activity over the last three decades. DEC 2021. (Link).

The National Council for Fire and Emergency Services releases a 'season outlook' in spring each year (this report was produced by Bushfire and Natural Hazards CRC for many years).

The Spring 2021 Outlook says: 'Below normal fire potential is predicted across the ACT, New South Wales and Victoria as a result of vegetation recovering from the 2019–20 bushfire season'. The report can be found here. 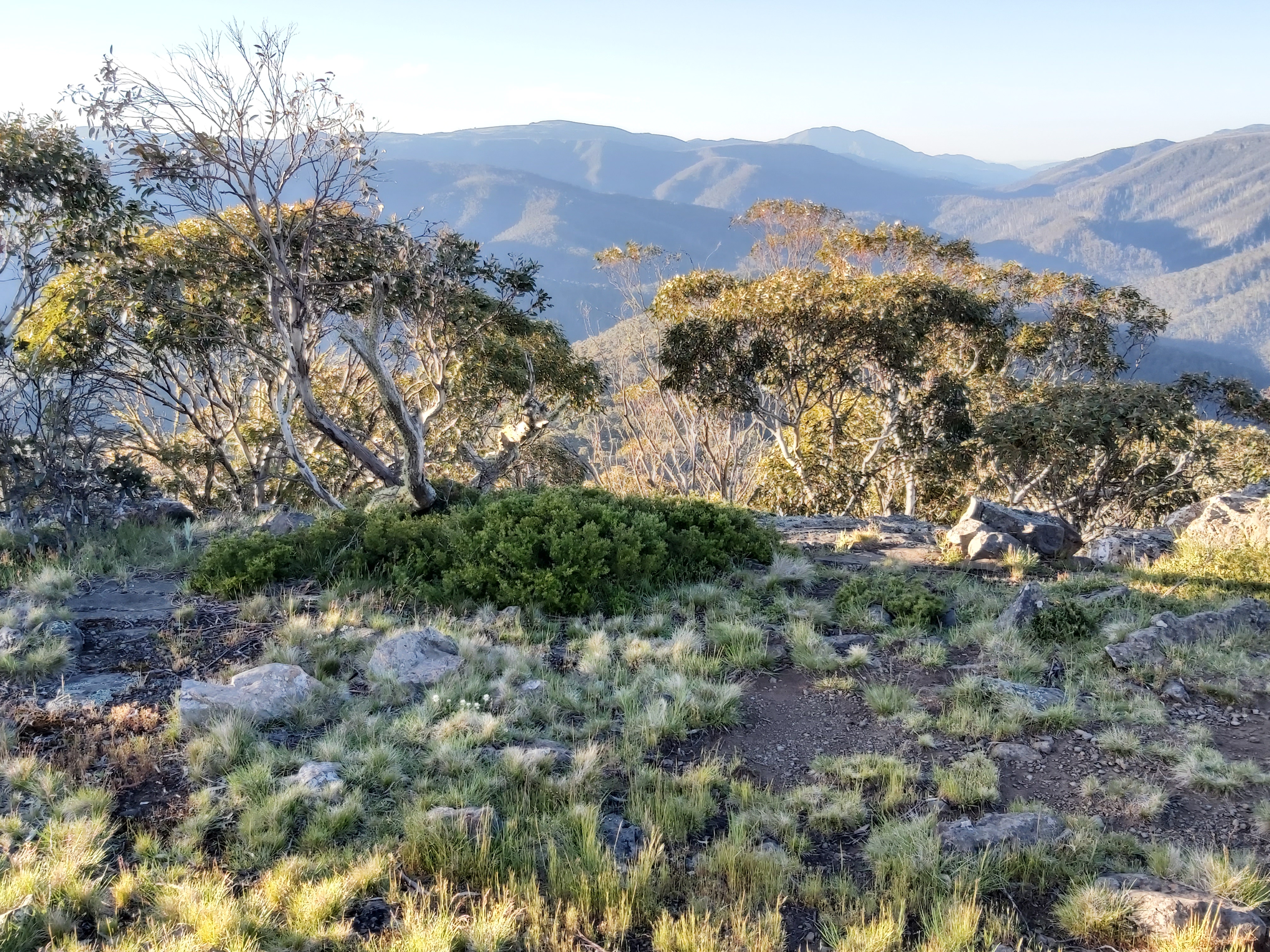