Victoria: A state that works for people, climate, environment, and economy 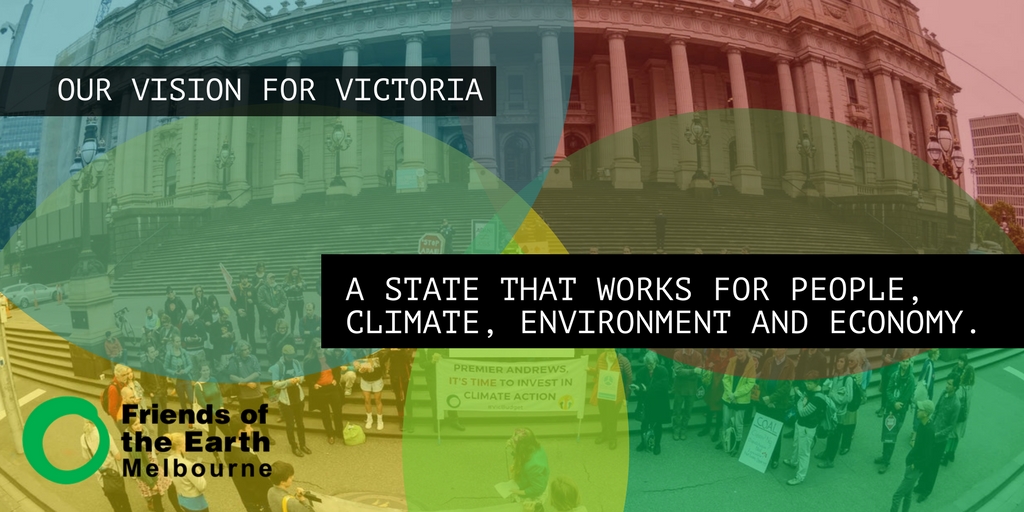 Friends of the Earth understands that good environmental decision making and policy should be based on social justice principles. The solutions we propose will build sustainability, reduce resource consumption and the creation of greenhouse pollution, create new – and good – jobs in new and emerging sectors, and increase social cohesion and equity.

“We are in a race against time to stabilise the climate. The impacts on peoples’ lives, livelihoods and prosperity, if we fail to act now, will be calamitous.  We can lose the battle on climate change, with horrendous consequences for all working people and their communities or we can act now to secure a stable climate with decent work for all, prosperity, and development”.

“Far too often the interests of workers and environmentalists have been pitched against each other, when fundamentally we share the need for a livable planet and societies based on environmental, social and economic justice.”

We offer the following proposals to all political parties. If enacted they would provide significant protections to the natural environment while helping to set our state on a more sustainable footing, with an economy which is ready for the inevitable changes that are already locked in through previous greenhouse pollution.

Friends of the Earth campaigners recently did a series of interview on our Dirt Radio show on 3CR. You can listen to Part 1 (Climate and Energy Justice, and Sustainable Cities) here and Part 2 (Carbon Capture and Storage and Forests) here. 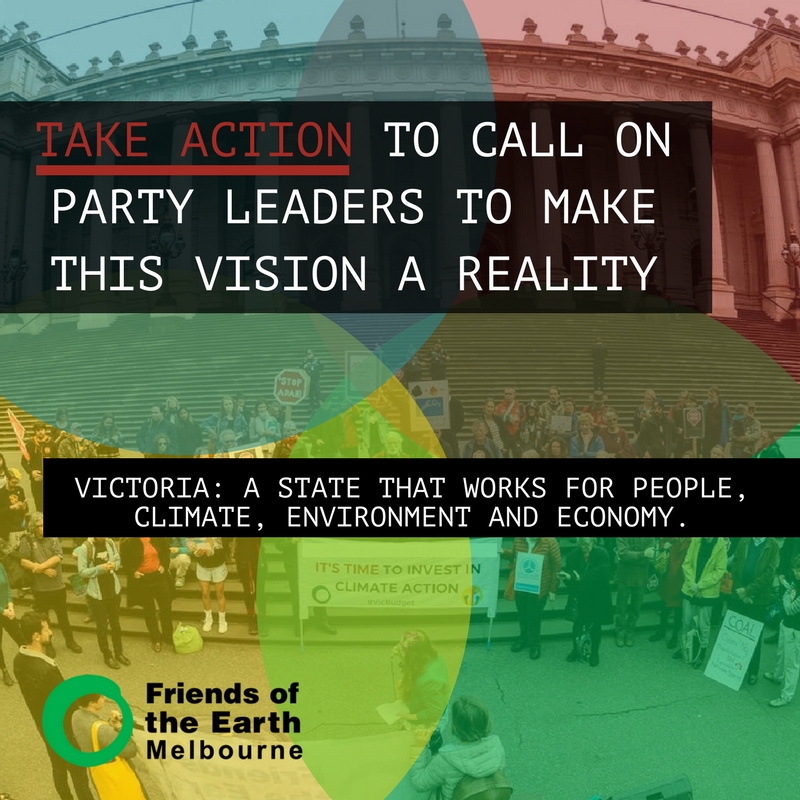 The state election provides an opportunity for all parties to announce ambitious new policies and funding that will see the state act decisively on climate change, and boost the development of renewable energy and energy efficiency measures.

It is essential that the Victorian Government continues its leadership role in opposing the federal Coalition’s ‘war on renewables’. The Victorian Coalition must adopt an energy policy that is based on climate science.

With the rebuild of the Climate Change Act, the safe passage of the Victorian Renewable Energy Target (VRET) through parliament and the start of auctions process for renewable energy, it essential that the state government – regardless of who is in power - continue to implement an ambitious climate change agenda.

As the problems with aging coal fired power stations demonstrate - the existing power supply in our state is not fit to task in a state with a growing population in a time of climate change. Apart from embracing renewable energy, Victoria should become a leader in energy storage. 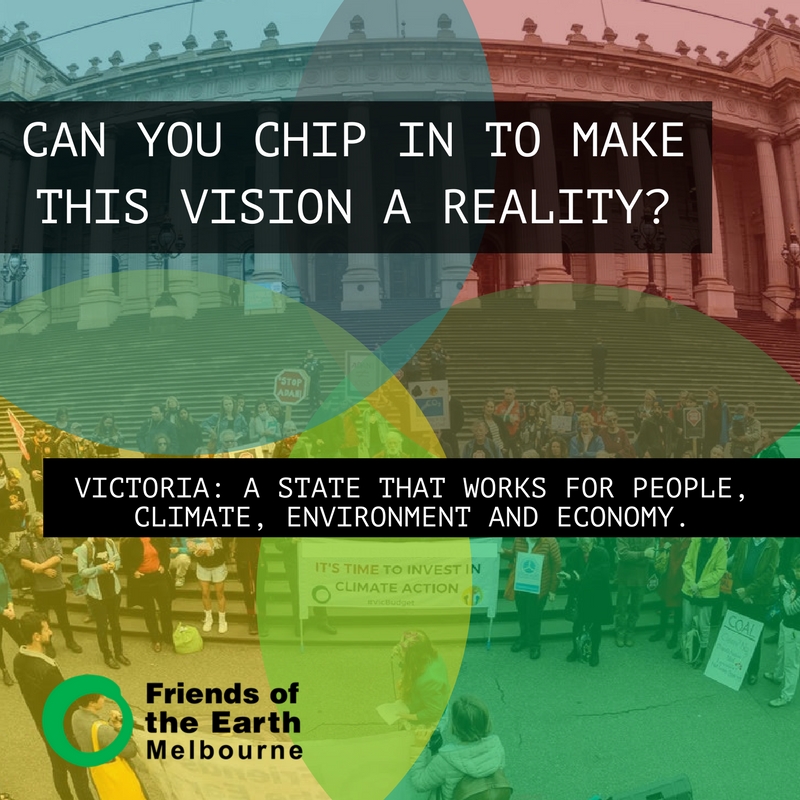 Melbourne keeps growing and is becoming ever more congested and crowded. If we want to keep our ‘liveable city’ tag we need to keep improving public transport and services, especially in fringe areas, while ensuring there is sensible and sensitive infill and increased density along key public transport lines.

It is also essential that we create breathing space for the ever growing population of Melbourne.

Parties should declare a package of new parks which will future proof the development of Melbourne through completing the reserve system around the city, ensuring current and future populations have access to clean air, recreational opportunities, and wild nature. Elements of this package are drawn from the VNPA proposals for the 2018 election and include:

These all provide opportunities for a range of recreational activities, room for some job creation (eg long distance walking trails, bike paths, park management, construction of infrastructure, fire and weed management, etc) and would help to increase social equality – most communities in Melbourne will benefit from this combined package in terms of access to new parks and open space.

After power stations, cities (including transport) are the largest contributors to the state’s greenhouse pollution. We need to re design Melbourne and regional centres to be smarter, less dependent on cars, with much better public transport. There will be environmental, economic and health and social benefits of such a transition. Budget allocations by the state government need to help drive the required transition.

Our detailed vision for a truly sustainable transport system for Melbourne is available here.

The Victorian economy continues to undergo profound change, shown by the recent final closure of the domestic car manufacturing industry. The state government has shown a willingness to intervene to protect jobs through initiatives like creating the Latrobe Valley Authority and investing in the Heyfield saw mill. But many thousands of Victorian people work in industries that are already in transition, and who must be supported through active government intervention. The closure of the Hazelwood power station because of a decision taken by the French owner highlights the need for a plan to ensure an orderly transition away from the state’s current reliance on coal to one reliant on renewables and storage.

Equally a plan is required to modernise the state’s logging industry if it is to survive the reality of a rapidly declining resource in the state forests.  The current forestry model is not sustainable and simply attempting to prop it up for a few more years by increasing access to native forests is not a viable option. 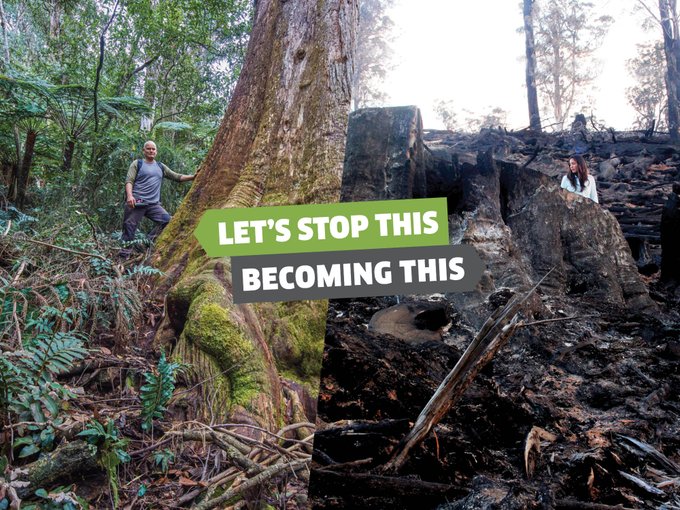 Support our vision for protecting forests - the Great Forest National Park, the Emerald Link in East Gippsland, and a transition plan for the native forest industry >> SIGN ON HERE

2/ Can you chip in with a donation to help us keep up the pressure? >> CONTRIBUTE HERE

3/ GET INVOLVED>> Contact [email protected] to find out how you can get involved with shaping our vision and making it a reality!

4/ COME ALONG TO OUR EVENTS

Check our EVENTS PAGE for details on events.

Matthew Guy comes to the party on renewable energy jobs, yet commitment to Vic Renewables Target is the real test. Release here (29/8/18)