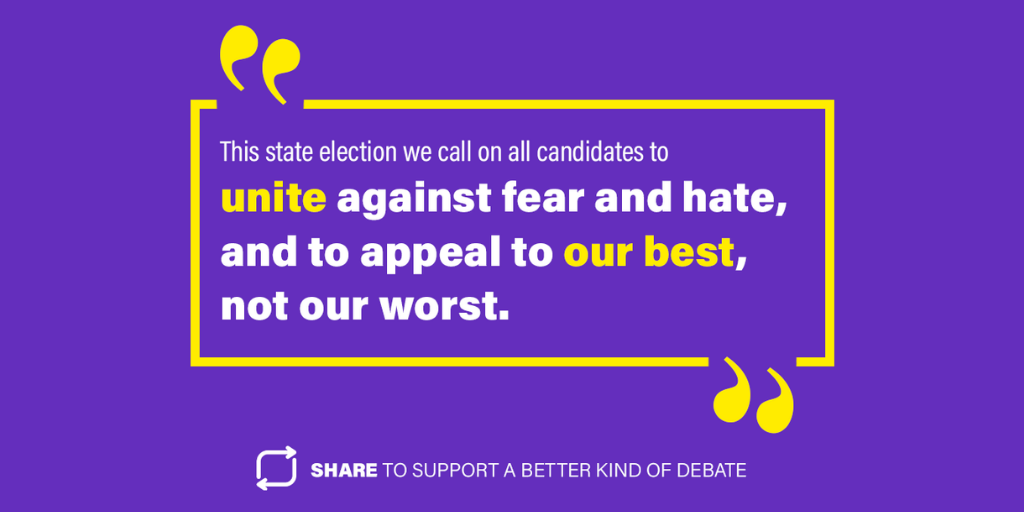 As state election writs are issued today, ten leading cross-sector organisations unite in demanding that candidates and political parties do not divide Victorian communities with hate and fear this state election.

The open letter, calls on all sides of government to put an end to dirty politics and targeted fear campaigns, and to compete in this election based on a vision of a safe and equal future for all members of the Victorian community.

CEO of Welcome to Australia, Aleem Ali said:
“Appealing to our worst is the lowest form of politics. Victorians are welcoming, generous and pride themselves on being good neighbours. I hope to witness an election campaign that promotes a better and more inclusive future for all.”

CEO of the Asylum Seeker Resource Centre, Kon Karapanagiotidis said:
“We must restore our proud history of multiculturalism, where people from migrant and refugee backgrounds arrived from around the world and worked to build a richer life and society for all of us. Now more than ever, Victorians are demanding leadership and integrity from our political leaders, especially for people seeking asylum.”

National Director of Democracy in Colour, Tim Lo Surdo said:
“While Victoria is safer than it has been in a decade, some politicians have created a racist ‘law and order’ agenda in a desperate attempt to weaponise our differences. And while they think we’re distracted, they cut funding to our schools and hospitals, and give tax cuts to their big business mates. This election, we call on all candidates to ditch the politics of fear playbook, and work together to build a Victoria that values everybody, no matter what we look like or where we come from.”

Director of Policy at the Refugee Council of Australia, Joyce Chia said:
“Victoria has a long and proud history of welcoming and including migrants and refugees from all over the world. Victoria has drawn strength from its diversity, from uniting rather than dividing. We look forward to an election campaign that builds on this bipartisan tradition of strong support for all the communities that make up Victoria.”

CEO of Jesuit Social Services, Julie Edwards said:
“Elections are a time to ask what kind of society we want, and to name our own vision. We call on our political leaders to deliver policies that provide effective responses to vulnerable Victorians. Particularly, we want to see our criminal justice systems focused on preventing crime from occurring, holding people to account for their actions while supporting them to address their problems and giving people access to positive pathways to turn their lives around. Every human being deserves a second chance and we want to see a Victoria focused on inclusion, not division.”

CEO of Environment Victoria, Mark Wakeham said:
“Public trust that politicians will act in the public interest has deteriorated as a direct result of fear mongering by some of our elected representatives. As Victorians go to the ballot boxes we call on all candidates not to use hate and fear to advance their short-term political agendas and instead act in the public interest of all Victorians.”

Secretary of the Victorian Trades Hall Council, Luke Hilakari, said:
“Every Victorian deserves to share in the success of our great state – no matter what kind of work they do or the colour of their skin. Working people know when conservative politicians start whipping up hate and fear against migrants, it’s cover as they try to cut our wages or cut funding to our hospitals, public schools and community services. But we won’t be divided, together we are unbreakable.”

CEO of the Tenants Victoria, Mark O’Brien said:
“Elections are a chance for Victorians from all backgrounds to have a say about how we want to run our state. No one should be shut out from that conversation. This election, we call on all parties to focus on uniting our state rather than denigrating any particular section of our community.”

Campaigns co-ordinator of Friends of the Earth, Cam Walker said:
“Victorians are rightly proud of our progressive, diverse and inclusive society. Political campaigns that seek to provoke fear or division work against the very spirit of our state. We urge all candidates and parties to focus on delivering positive policy agendas, not dog whistle campaigns that are aimed at stirring up community fear.”

CEO of the Australian Conservation Foundation, Kelly O’Shanassy said:
“Too often election campaigns bring out the worst in our politics. Scaremongering, scapegoating and personal attacks are becoming the norm. We call on all candidates running in the upcoming election to pledge to a contest of ideas for a better future for Victoria. We need that contest now, more than ever, as our state faces huge challenges like stopping climate damage and creating a renewable future.”

STATEMENT — A JOINT STANCE AGAINST FEAR AND DIVISION THIS STATE ELECTION

Elections are a time when we come together to decide what we value about our towns, regions and communities. We elect a government to address the major social, economic and environmental issues of our time and plan for our shared future.

When politicians use fear to advance their agendas they threaten people’s safety and divide our communities.

Victorians call on all candidates in November’s state election not to use fear and hate to advance their agendas.

This year politicians have run fear campaigns about renewable energy, crime, and safe injecting rooms. More recently, our political leaders have actively sought to dehumanise African Australians and pit members of our community against each other.

Victorians call for an end to dirty politics and small-target fear campaigns.

Together, we call on political candidates to give voters the chance to make fair and informed decisions about the future of our State this election.

Political leaders are judged by their words and their actions. Scapegoating based on race undermines our strong multicultural society. We seek political leaders who will represent all Victorians.

This state election we call on all candidates to unite against fear and hate, and to appeal to our best, not our worst.

We call on candidates to set out a vision that will deliver a safe, harmonious future for all Victorians.

The following organisations pledge to stand up against fear mongering, racism and discrimination.