45 YEARS OF ACTING UP! FRIENDS OF THE EARTH FOREST CAMPAIGNS

Friends of the Earth podcast history series made in collaboration with 3CR 855 AM community radio show Acting Up!
Monday 2.00pm-2.30pm.  Ratbags, peaceniks and agents of change, resistance radio that explores the movements that made us.

45 Years of Acting Up! Walking tall amongst giants audio episode 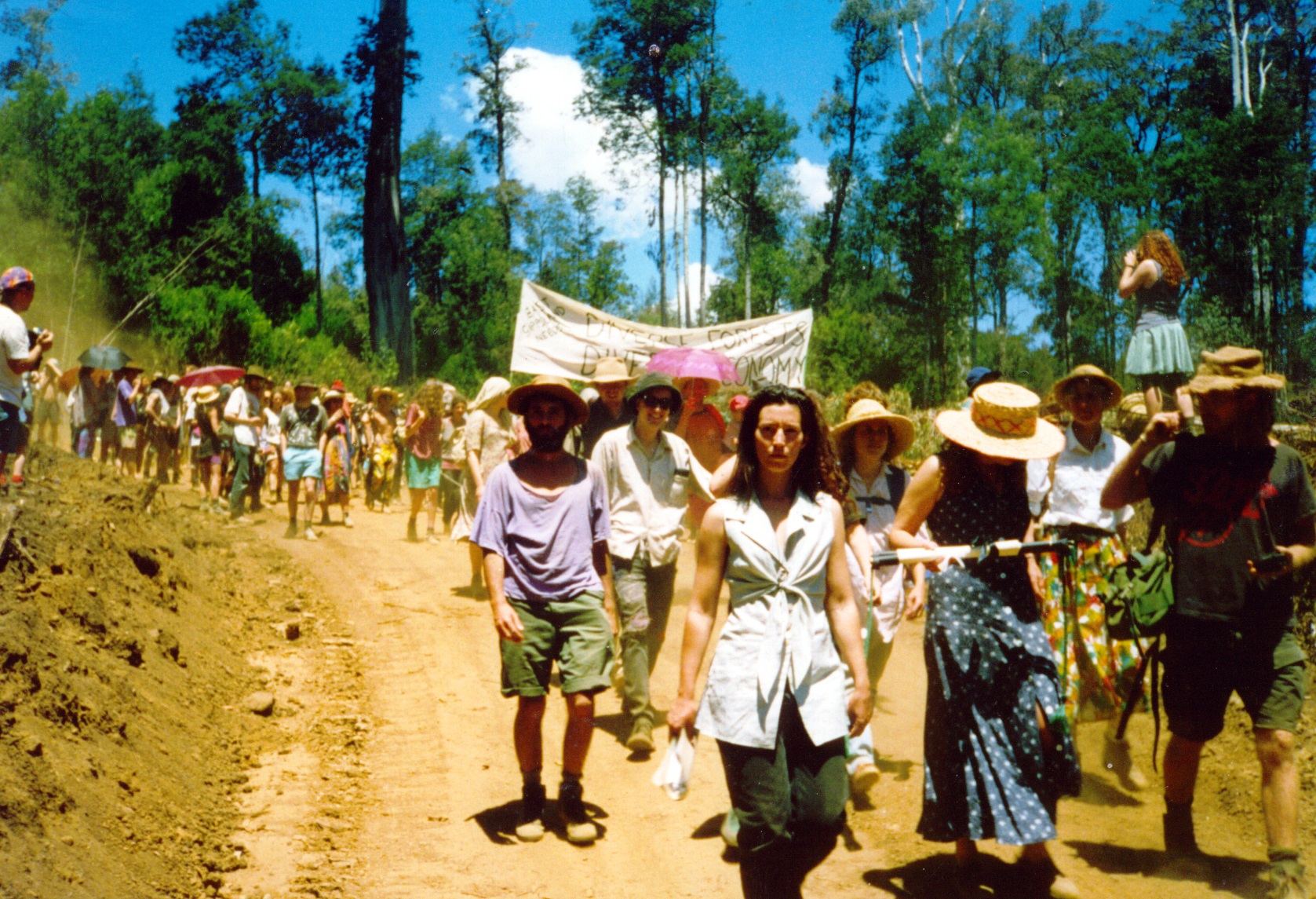 Since the 1990s, Friends of the Earth’s forest campaigns flourished, collaborating with Indigenous communities to protect land and water rights, saving old growth forests from logging, and challenging plantation practices.  Friends of the Earth helped to break down “greenies versus loggers” dynamics, establish the Forest Stewardship Council, and support greater co-operation with trade unions to launch the Earthworker alliance.  Keep reading to find out about our affiliates and partners, and discover how you can help protect Australia’s native forests, expand our national parks and help locate sites for the koalas of the Strzelecki Ranges.

1983 FOE campaigns on the die-back of native forests on New England tablelands, NSW.

1992 The East Gippsland Forest Network (EGFN) merges with FOE Melbourne. The EGFN had grown from the Melbourne Rainforest Action Group in the late 1980s. The creation of the FOE Melbourne Forest Network and the energy of a new generation of activists result in more than five years of intense campaigning to protect Victoria's forests using telephone tree communication.

1996 OREN achieves the first prosecution for a breach of a logging permit on private land in Victoria. With the support of the Environmental Defenders Office, FOE Melbourne takes a case to the Victorian Civil and Administrative Tribunal, targeting a timber company with links to a minister in the Kennett State government, exposing the scale of logging on private land across Victoria. Over 60 direct actions take place state wide to save forests.  Dandenong water catchment pollution effecting 7 towns is taken to VCAT and is the first win of its kind for FOE Melbourne and supporters.

1997 For five years, FOE and affiliate local activists blockade illegal logging of old growth forest in the Goolengook valley in the far eastern corner of Victoria.  Protesters climb and sit-in heritage river trees and many are arrested.

1998 Following on from FOE Indigenous Solidarity Conferences, many delegates travel to the Barmah forest to attend an Indigenous-only strategy session hosted by the Yorta Yorta community.  FOE joins with the Electrical Trades Union, the Australian Nursing Federation and other representatives to launch the Earthworker Alliance, a forum to foster greater co-operation between green groups and trade unions.

2000 FOE devotes more attention to the ecological and social impacts of the establishment of plantations, including the use of herbicides, impacts on ground water and other negative environmental outcomes.

2002 The Dharnya Alliance, a collaboration between the Yorta Yorta Nation and green and social justice organisations, is formed. FOE organises the first 'Barmah summit' and acts as secretariat for the alliance.  Over-loggoing of Goolengook forest is exposed and 2,000 hectares are saved allowing regrowth.

2003-2004 FOE exposes arsenic use in plantation forests and win restrictions.

2006 FOE activist Anthony Amis has spent a decade working to draw attention to disastrous logging regimes on private land.  Anthony continues to monitor forestry operations on the estate of the Victorian Plantation Corporation, which was privatised and sold by the Kennett government in 1998 to Hancock,  US-based insurance company.

2018 FOE Melbourne highlights the Victorian Government’s “fuzzy map” as an excuse for VicForests to log outside of its allocated area, and challenges logging over the past five years as unlawful.

2019 Giant billboards on trailers and bikes travel key marginal electorates with a message to voters ‘WOODCHIPPING VICTORIA’S FORESTS.  IT’S LABOR’S CHOICE’.
In November, Goongerah Environment Centre and Friends of the Earth welcome the Victorian government’s announcement to protect 96,000 hectares of forests in eastern Victoria, and the complete and immediate protection of 90,000 hectares of old growth forest by 2030.  The release of the Greater Glider Action Statement exempts another 96,000 hectares of forest across Victoria from logging.  The government also announce a 30-year plan to support the timber sector as it transitions out of native forests, and allocates $120 million to industry to support the transition.  FOE Melbourne and GECO continue to lobby and campaign to phase out old growth forest logging, protect forest habitats and ecosystems, support a just transition to sustainably managed plantations and non-timber sources of fibre, and create a Great Forest National Park, before 2030.

Find out about Earthworker Co-operative