This is the fourth blog in a short series focusing on 15 FoI requests to Victorian water authorities during 2020/21. The other blogs included: PFAS in Drinking Water, PFAS and Groundwater Pollution and PFAS in Effluent Pollution from Waste Water Treatment Plants.

Recycled water is residential water and industrial trade waste that has been “treated” and disinfected at a waste water treatment plant. Current water treatment technology can successfully remove almost all of the pathogens from waste water, but is much less successful at removing chemicals such as PFAS.

Rather than releasing all of the treated water back into the environment, recycled water which has been treated to a standard approved by the EPA and Department of Health (in Class A Recycled Water), is allowed to be used for a variety of applications. It is also a financial resource utilised by the water company.

Class A Recycled Water can be used for uses such as clothes washing, garden irrigation, food crop consumption and firefighting. Class C Recycled Water is used mainly for irrigation and discharge to the environment. In terms of PFAS risks to agriculture from recycled water, irrigation of milk pasture crops and green vegetables have recently been found to pose the highest risk in Australia, with root vegetables regarded as a moderate risk.

Recent studies in China have shown PFAS in crops as varied as spinach, tomatoes, lettuce, cabbage, strawberries and corn. PFAS has been absorbed by the roots from PFAS tainted soil and even through their leaves via the atmosphere. 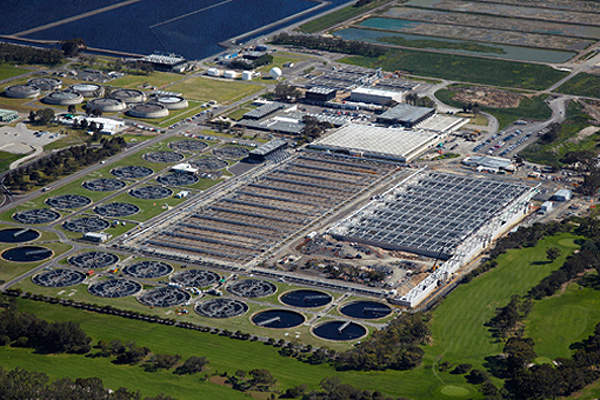 Recycled water is often portrayed as being good for the environment as it means that less potable water is required for uses that recycled water can be used for. This saves a valuable resource particularly in times of climate change where droughts are predicted to last longer. Many communities in Australia are already confronting the stark fact that they are running out of water. Friends of the Earth does not oppose the use of recycled water, but the recycled water needs to have much better treatment options that remove chemicals such as PFAS as well as microbiological pathogens. 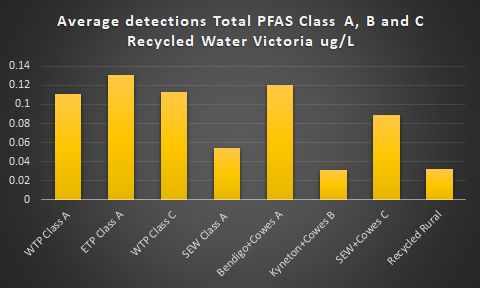 Average Total PFAS detections in recycled water 2015-20, showing higher levels for Melbourne Water's Western Treatment Plant and Eastern Treatment Plant, in comparison to the rest of the state. SEW refers to South East Water. Bendigo + Cowes refers only to 2 samples with the Bendigo sample taken from effluent pipeline. Recycled Rural is recycled water whose class was not specified.

Most of the recycled water testing for PFAS was conducted by Melbourne Water at the Western and Eastern Water Treatment plants in 2019. 71 PFAS test regimes (test regimes varied from 2-35 individual chemicals) were conducted over May-June 2019 at the Western Treatment Plant and 38 at the Eastern Treatment Plant. The most extensive testing however was conducted by South East Water with 46 test regimes over 2015-20. South East Water also tested for a wider range of PFAS chemicals than Melbourne Water, giving a much more comprehensive indication of the types of PFAS chemicals found in recycled water over a longer period of time.

Across Victoria between 2015-20 196 testing regimes were implemented for PFAS chemicals in recycled water. 55.6% of these were conducted by Melbourne Water, with 23.4% conducted by South East Water.

Across Victoria over 1800 individual PFAS tests were implemented. PFAS chemicals were found in 35.3% of all individual samples and 83.2% of all test regimes. 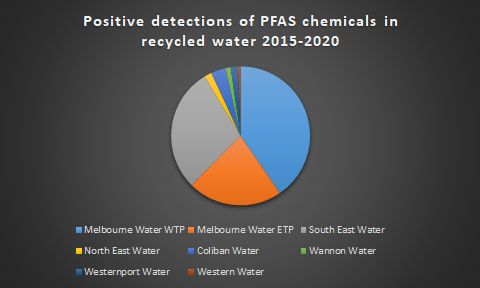 Positive detections of individual PFAS chemicals were dominated by Melbourne Water and South East Water. 79% of all recycled water tests were carried out by these authorities. 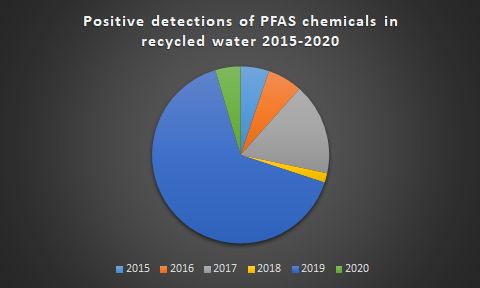 Detections were dominant in 2019 because almost all of Melbourne Water’s testing occurred during May – June of 2019. 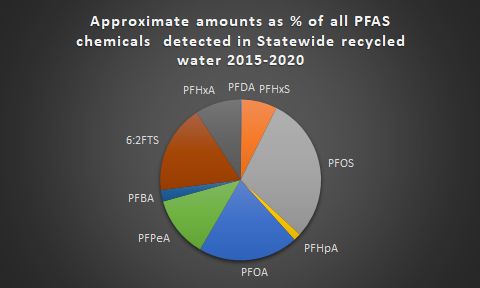 This graph shows that 9 different PFAS chemicals were detected in recycled water from Victorian WWTP's with PFOS and PFOA dominating detections of long chain PFAS and PFPeA and 6:2 FTS (all detections from Melbourne Water) dominating for short chain PFAS. 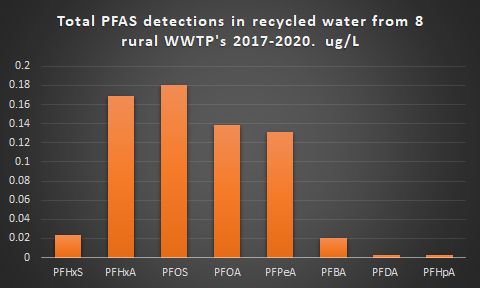 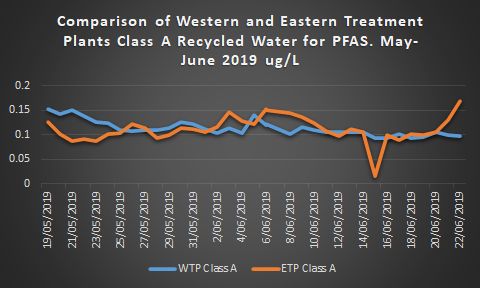 The above graph compares the PFAS levels of Class A Recycled Water from Melbourne Water’s Western And Eastern Treatment Plants. Class A Recycled Water needs to be approved by the EPA and endorsed by the Department of Health. Class A water is designated for high-exposure uses, including: residential developments (for example, 'dual pipe' systems for toilets and garden use), irrigation where access is public and unrestricted and irrigation of edible crops intended for raw or unprocessed consumption. 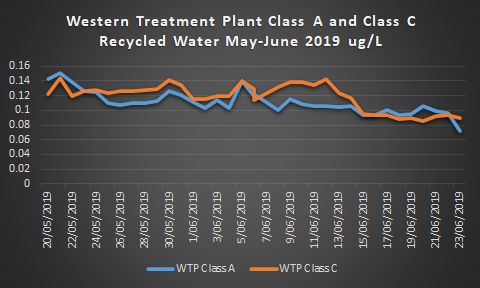 This graph is also telling as it reveals that there is only a slight reduction in PFAS levels in both Class A and Class C recycled water supplied from the Western Water Treatment Plant. 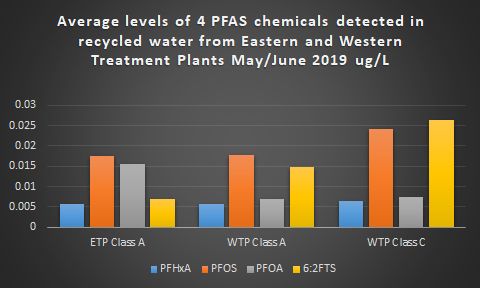 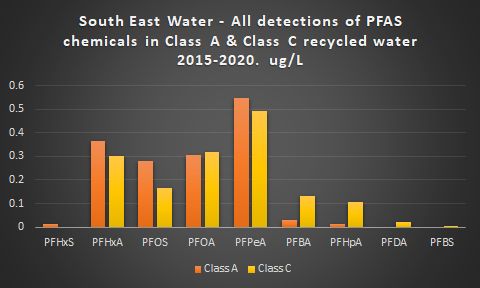 Testing in South East Water’s WWTP’s have been dominated by the short-chain PFAS chemical, PFPeA. PFPeA was not tested for by Melbourne Water at their WWTP’s. 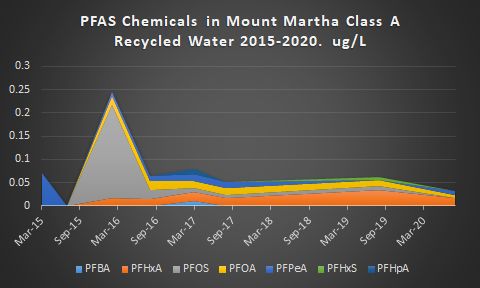 Mount Martha WWTP data shows a spike in detections of PFOS in 2016 with levels reducing substantially after this date. 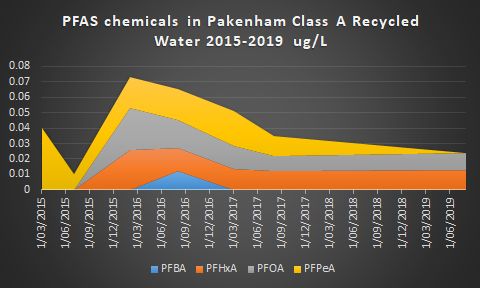 The water industry is well aware of the issue of PFAS contamination of recycled water. There have been recent attempts to set trigger points for 3 PFAS chemicals (PFOA, PFOS and PFHxS) in recycled water. Generally speaking, the data included in the Freedom of Information Requests reveal that the chemical of most concern in relation to these trigger points is PFOS. 43 PFOS detections would have breached the proposed trigger points, with the highest being 0.2ug/L detected at Mount Martha WWTP in 2016. This detection would have been 11 times higher than the proposed trigger points. Using the trigger points it has been determined that the irrigation of milk pasture crops and green vegetables posed the highest risks from PFAS, followed by root vegetables which were considered a moderate risk.

The appears to be very little work in Victoria concerning monitoring for PFAS residues in food that could be impacted by recycled water. It is unclear if Agriculture Victoria are actively testing for PFAS contamination of food crops irrigated with recycled water. Agriculture Victoria do undertake surveys for pesticide residues, but these surveys appear not to include PFAS. It is also unclear if organic growers are testing for PFAS residues on crops that may be irrigated by PFAS tainted water.

The 27th Australian Total Diet Survey sampled 112 different foods and beverages including bottled and tap water for PFAS chemicals. PFOS was the only congener detected in five of the 112 foods sampled. 22 of 1136 samples found detectable levels of PFOS. The highest concentrations were found in mammalian offal. No detections were found in milk and dairy products, fruit, vegetables, bread, infant food or drinking water. The primary concerns appear to relate to sites and adjoining areas where there has been a historical use of fire-fighting foams which contained PFAS. No mention is made in the ATDS of crops grown with recycled water or PFAS contaminated surface or groundwater. 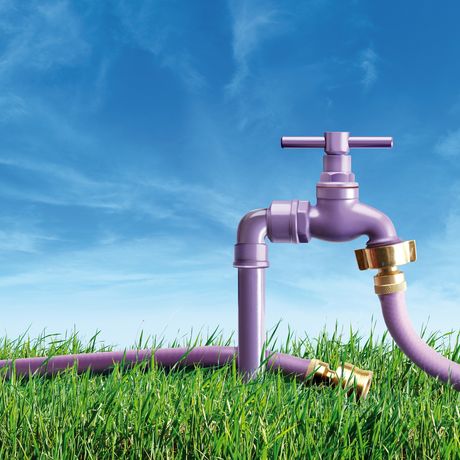 The use of PFAS tainted water could also cause problems on the land where the water is used. PFAS is bioaccumulative and soils will most likely retain the PFAS for many many years. Vegetables have also been shown to uptake PFAS chemicals through their roots and leaves. Consumers of recycled water need to know that their paddocks or home gardens could exposed to PFAS chemicals that are unlikely to breakdown in the near future and could be absorbed by the plants growing in those paddocks and gardens. Have users of purple hose recycled water schemes for instance been made aware that the water they are using could contain PFAS?

These blogs take time and resources to research and write. Donations to keep this work coming, can be made here. Mention that you'd like the donation to go to toxics.