During 2020-2021, Friends of the Earth conducted 15 Freedom of Information Requests (FoI) to Victorian water authorities concerning detections of PFAS in drinking water, water treatment plants, biosolids, recycled water and waste water effluent. This blog relates only to information supplied regarding drinking water. Future blogs will discuss the other issues.

Three FoI requests were sent and received back by late 2020 from Melbourne Water, Yarra Valley Water and Gippsland Water. The other FoI’s, sent off in 2021, were received by late November 2021.

PFAS (per- and polyfluoroalkyl substances), have been used in a myriad of applications including fire fighting foams, wet weather gear (such as gortex), scotchguard, non-stick cookware, hydraulic oil and food wrappers. They repel oil and water and are ubiquitous in the environment. Due to their persistence PFAS chemicals have been dubbed “forever chemicals”. PFAS have been linked to a number of health problems including cancer, liver damage, decreased fertility and increased risk of asthma and thyroid disease. 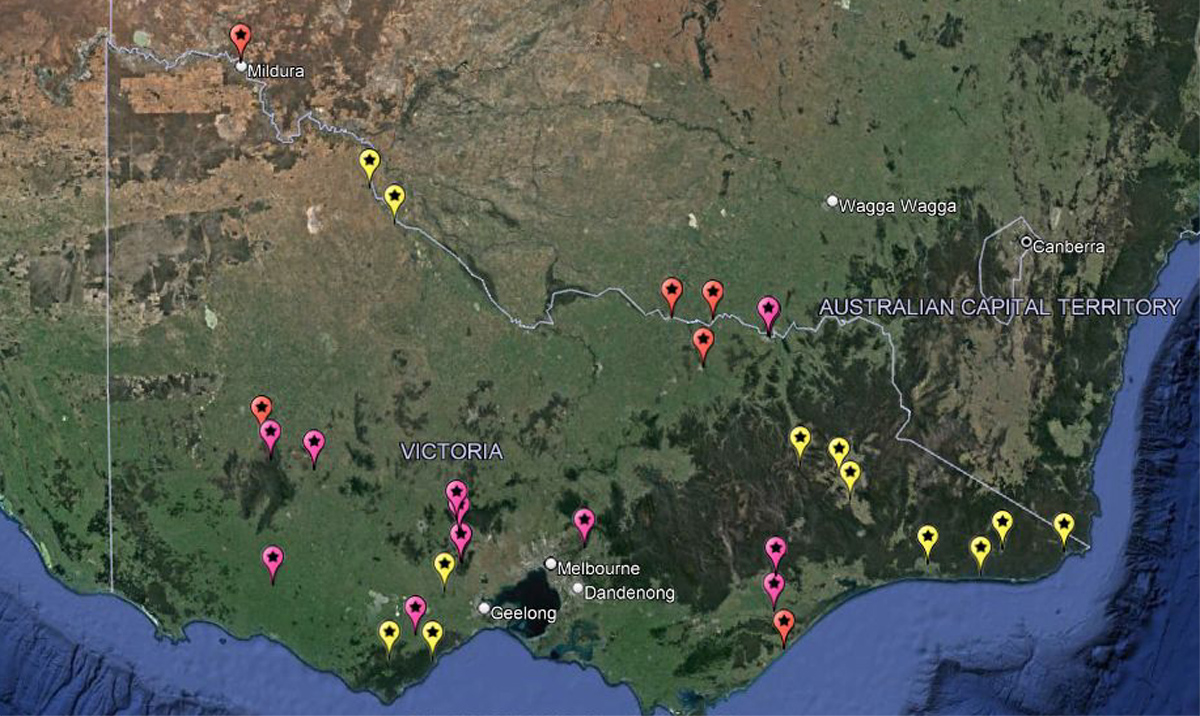 In terms of drinking water, an Australian study published in 2011 took samples of drinking water, including Victoria from a number of locations including Footscray, Parkdale, Riddells Creek, with the highest levels detected at 0.00121µg/L*. These levels were much lower than those detected by water authorities in the FoI data supplied to FoE. (*1 µg/L (one part per billion) is the equivalent of one drop in an Olympic size swimming pool).

Wider scale PFAS testing started at Wangaratta, the northern Grampians, Penshurst and Caramut (in south western Victoria) in 2015. As the PFAS issue became more pronounced due to media reports of contamination occurring near army bases and fire fighting facilities, testing widened in 2016 to Sale and also South Gippsland. Frequent testing started to occur near Wodonga in 2017, Briagolong and Seaspray (Gippsland) early in 2017. 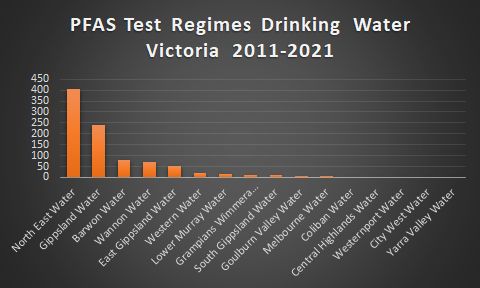 The FoI data reveals that most PFAS testing in drinking water in Victoria has been conducted by North East Water, largely due to concerns of toxic runoff from Bandiana Army base into Wodonga Creek, the source of drinking water for Wodonga. North East Water also focused testing on the Murray River at Waygunyah, Lake Mulwala (the drinking water supply for Yarrawonga) and the Ovens River and bores at Wangaratta. Each testing regime can include tests for a suite of up to 28 different PFAS chemicals (4700 different PFAS chemicals have been discovered, meaning 99.4% of PFAS chemicals are not tested for at all in Victoria). 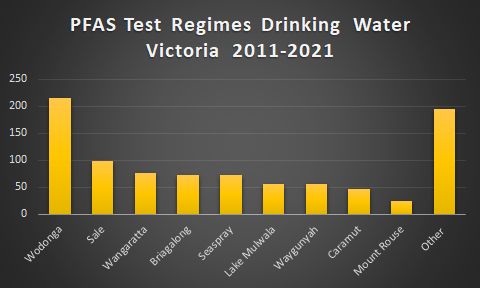 Between 2011-21 (but primarily 2015-20), PFAS chemicals were detected by water authorities 80 times, at approximately 39 different locations. However, it would appear that 7 positive samples from East Gippsland Water and a couple from Barwon Water are likely to be erroneous possibly due to a sampling or a lab contamination issue.

95% (18) of detections from 5 locations (?) from Lower Murray Water are also highly questionable, in that the data provided made it impossible to determine the location accuracy. A phone call with Lower Murray Water also revealed that they had similar problems interpreting the data that they had received from the contracted lab. Given these discrepancies approximately 50 of the 80 Victorian samples can be relied on as being “accurate”. Contamination of PFAS samples is easily made if the correct procedures are not followed. 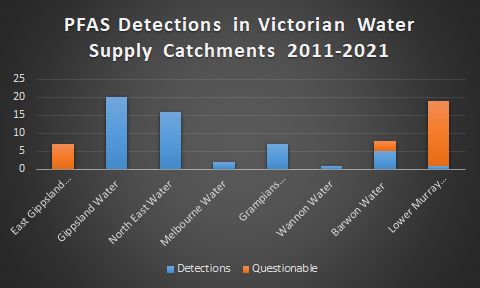 Taking out the questionable location data, 24 different locations are likely, reducing even further (to 17) if one takes into account samples from inlets to water treatment plants, reticulated samples and different groundwater bore samples from a same area. About 20% of all positive samples came from reticulated supplies, meaning the rest, 80% were from untreated sources of raw water.

Reticulated detections are a concern as they imply that PFAS is getting through water treatment plants. Positive detections in the reticulated supplies occurred at Sale (4), Seaspray (4), Briagolong (1) and Mildura (1). Levels of PFBA were detected at Seaspray as high as 0.08 µg/L and 0.04 µg/L, Sale 0.03 µg/L and 6:FTS at Mildura of 0.037 µg/L. Highest levels of PFOS were recorded at Sale 0.004 µg/L (5.7% of ADWG). 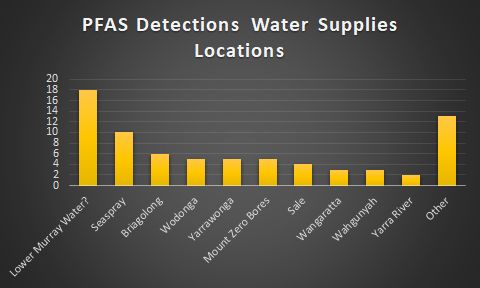 In terms of interpreting the data in terms of potential health impacts, the Australian Drinking Water Guidelines (ADWG), published by the National Health and Medical Research Council only have guidelines for three PFAS chemicals, PFOS, PFHxS and PFOA. 55% of all PFAS detections in Victorian drinking water supplies have no guideline levels under the ADWG.  This includes a detection of 0.1µg/L for N-MeFOSA in Mount Zero groundwater and relatively high detections of 6:2 FTS, PFPeA, PFBA and PFHxA. 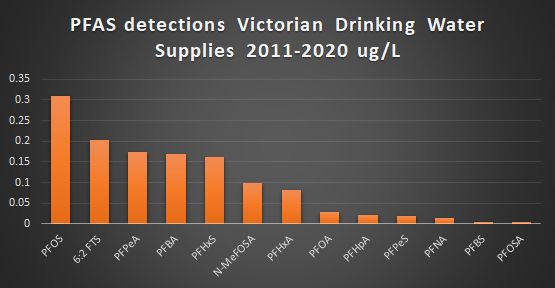 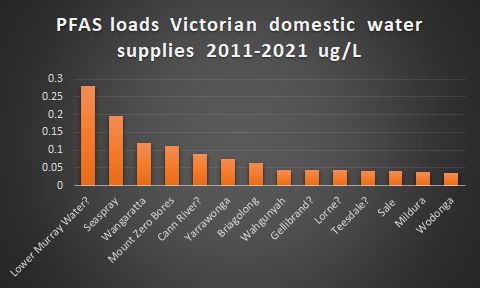 In terms of breaches to the ADWG, two samples came in above the ADWG, but one was from a questionable source. The samples were one PFOS sample from Cann River pump station 15/1/18 0.09µg/L and one PFHxS sample from the Ovens River offtake Wangaratta 6/3/18 also at 0.09 µg/L. It is highly likely that the Cann River sample was erroneous, possibly due to contamination during sampling. No information concerning the Cann River incident was publicly announced (or any other of the East Gippsland detections) by East Gippsland Water. The Wangaratta detection is regarded as the highest PFOS level recorded in a water supply in Victoria. (In terms of national detections of PFAS in drinking water, the Wangaratta sample would come in behind higher samples from Oakey (Qld), Williamtown (NSW), Katherine (NT), Ayr (Qld) and Esperance (WA)).

Guideline levels however vary between international jurisdictions. For instance, the PFOS drinking water guideline in New York State is 0.01µg/L seven times lower than the Australian guideline. If this guideline was accepted in Victoria, 5 PFOS detections at Lake Mulwala, Wahgunyah, Gellibrand, Wodonga and Great Western would have been in breach of the ADWG. Similarly, PFHxS guidelines in New Hampshire are set at 0.018µg/L meaning detections at Seaspray and Briagolong would have breached this guideline.

Another complicating factor is that ANZECC guidelines don’t necessarily apply to reservoirs, dams or water infrastructure, but even so, a PFOS detection in the Ovens River at Wangaratta of 0.09µg/L would be almost 400 times higher than the 99% ANZECC ecological trigger level for a high quality waterway. PFOS detected at Lake Mulwala at 15µg/L would represent a level 65 times higher than the 99% ecological trigger level. PFOS levels at Merrimans Creek in Gippsland, the Murray River at Waygunyah and a couple of PFOS readings in Wodonga Creek would also breach 99% trigger levels. All PFOS detections however, would be well under the 95%, 90% and 80% trigger levels. 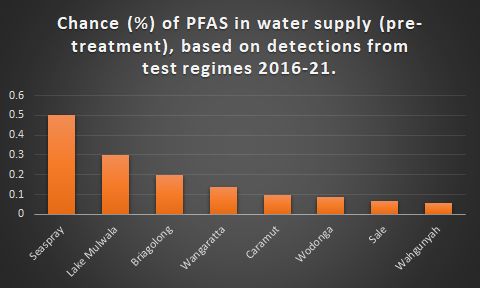 The chances of getting a PFAS detection in a water sample are slim. For instance 99.5% of all individual PFAS samples taken at Seaspray came in negative, with 0.5% of samples positive, however this would imply that Seaspray is more at risk of PFAS contamination in their drinking water supply that any other community in Victoria. Interestingly the source of the PFAS at Seaspray may be from Coal Seam Gas drilling that occurred 500m upstream of the Seaspray drinking water supply. CSG has been known use PFAS chemicals and Gippsland Water acknowledged that CSG was a risk to drinking water supplies at Seaspray in 2015.

Over the next couple of weeks, FoE will be producing some more blogs regarding the data that has been obtained from the FoI requests. Our next blog will pertain to releases to the environment of PFAS chemicals from waste water treatment plants. Most of this information has been uploaded onto the Australian PFAS map. Contact [email protected] for more information.