Groundwater pollution occurs, when pollutants that have been released to the ground make their way through to groundwater. Wastewater treatment plants have been shown to cause adverse impacts to the surrounding environment and groundwater. Leakage from unlined or partially lined dams and settlement ponds, leaching from biosolids storage areas, use of treated effluent and release of partially treatment effluent can all contribute to pollution in groundwater below the site.

PFAS chemicals make their way into water treatment plants, through use of PFAS in household products (including cleaning, washing and toilet use), industrial waste disposed of in sewers, and landfills (which may also be connected to the sewer system). Once they make their way into WWTP’s, PFAS chemicals can accumulate in biosolids and may only be partially removed during waste water treatment. 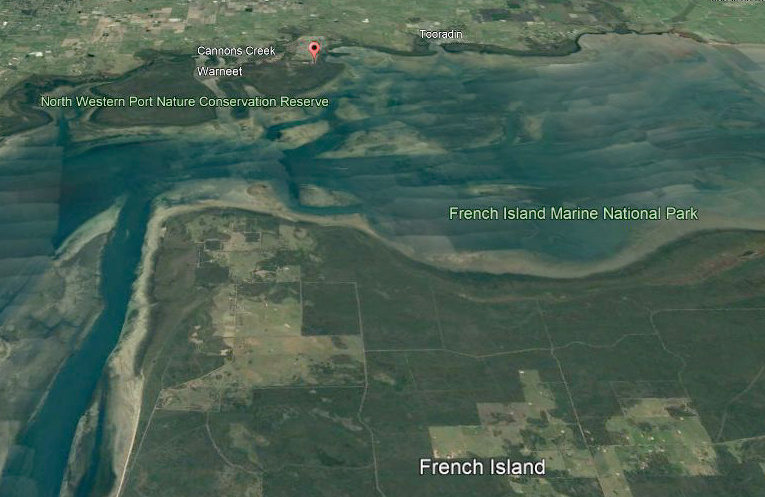 Blind Bight Waste Water Treatment Plant (red pin) recorded highest PFAS levels, but 87% of Victorian Water Authorities aren’t testing for PFAS in groundwater. At one bore underlying Blind Bight, a PFOS detection came in at 739 times higher than National Ecological Guidelines levels. The WWTP is in close proximity to the North Western Port Nature Conservation Reserve and RAMSAR listed wetlands. No information could be found determining if PFAS is entering Westernport Bay from the treatment plant.

In terms of groundwater pollution from water treatment plants, the only positive PFAS detections provided via the FOI process pertain to groundwater monitoring of 4 Recycled Water Plants managed by Western Water (now Greater Western Water after a merger with City West Water) and 5 managed by South East Water. The extent of groundwater contamination from waste water treatment plants elsewhere in the state remains unknown as the 13 other water authorities have not tested for it and no other groundwater data was forthcoming via the FOI process. 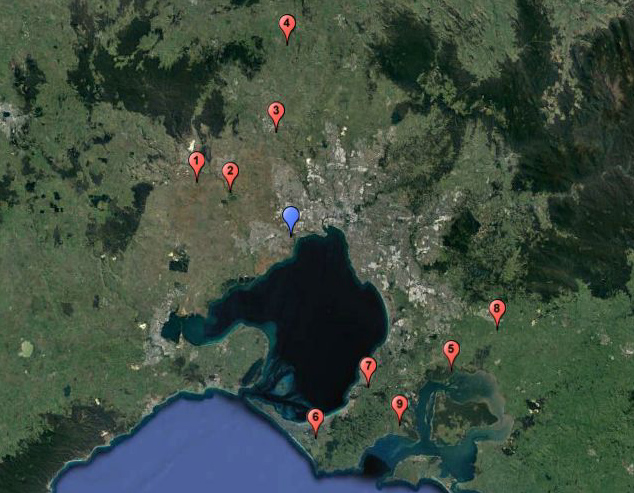 From the FoI data, it would appear that testing for PFAS in groundwater at WWTP’s started in 2016 by South East Water at several locations. These included: Blind Bight, Boneo and Koo Wee Rup. Testing was later expanded to Lang Lang, Longwarrry, Mount Martha, Pakenham, Bald Hill Farm (Pakenham) and Somers. Western Water (now known as Great Western Water) started testing for PFAS in groundwater Bacchus Marsh RWP in 2017, Sunbury and Melton in 2018, Woodend, Romsey, Riddells Creek and Gisborne in 2020. 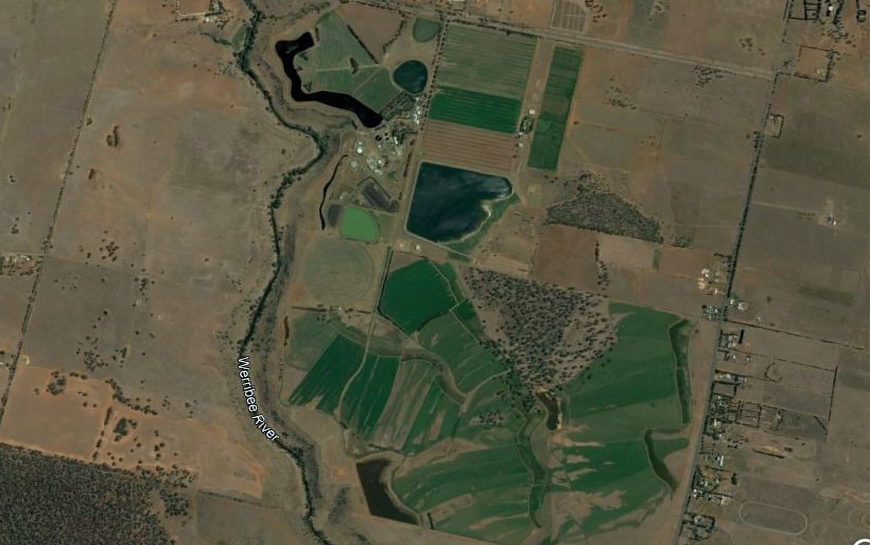 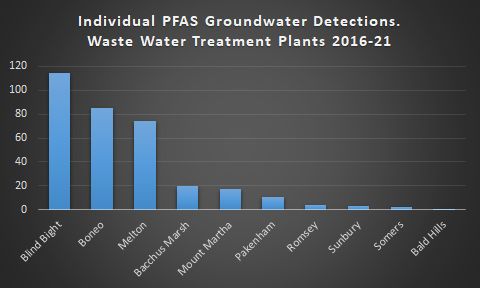 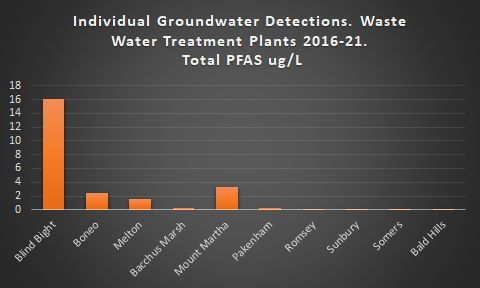 Graph showing how much PFAS has been detected between 2016-21. Blind Bight stands out. 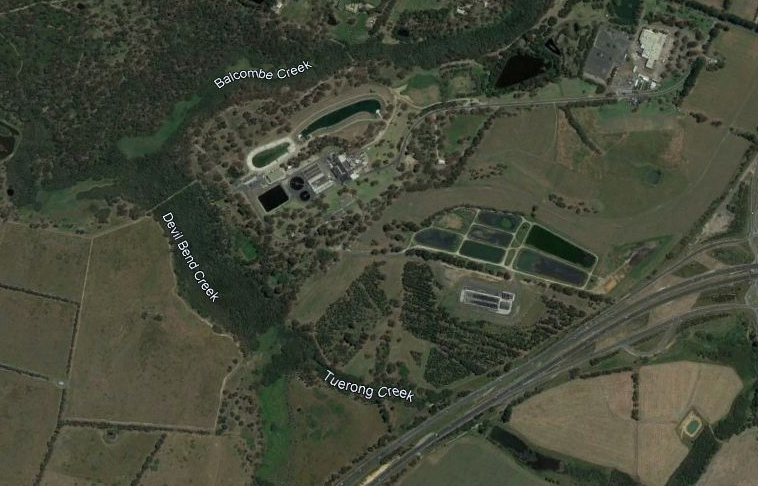 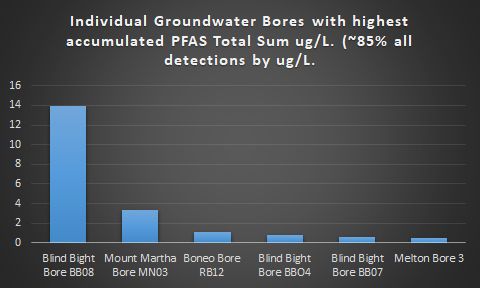 South East Water’s Blind Bight WWTP saw a big increase in PFAS detected in ground water underlying waste water treatment plant over a 5 year period. Most of the PFAS detected at Blind Bight has been detected in one Bore BB08. The FoI provided no information about the exact location or depth of the bores. No information either about how far the PFAS plume/contamination is extending. 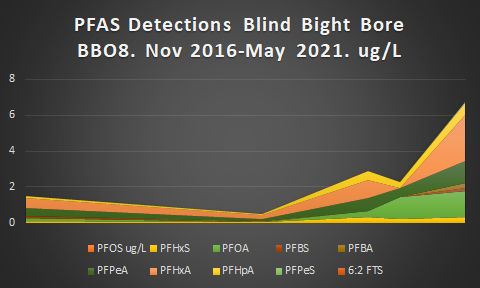 Across all WWTP’s there were 47 instances where the PFOS 99% Trigger level was breached. The average PFOS level detected at eight WWTP’s where PFOS was detected was 0.031µg/L or close to 135 times above the 99% Trigger level. One detection breached the 95% trigger level. 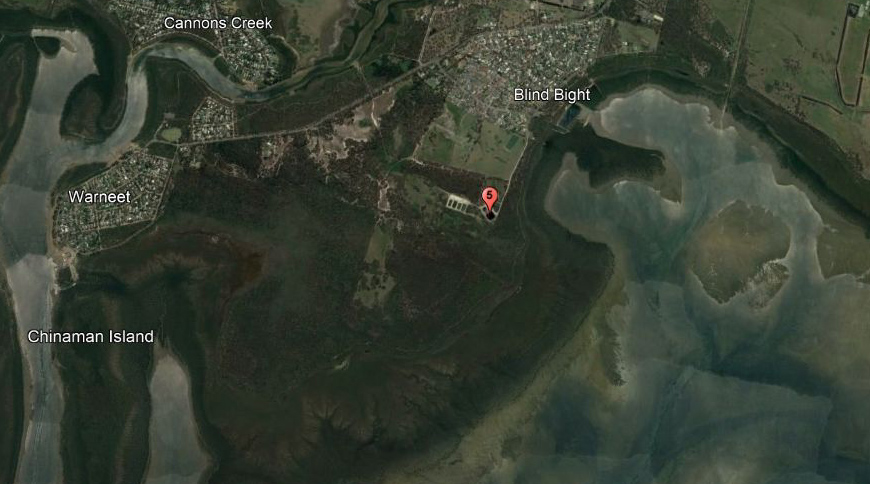 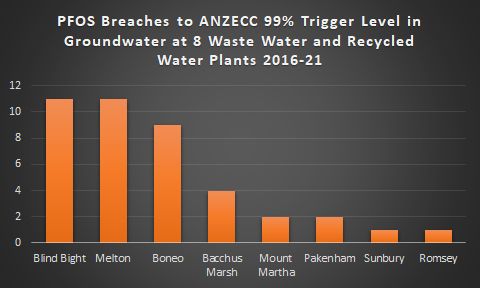 Blind Bight WWTP and Melton RWP recorded the most detections of PFOS above ANZECC 99% Trigger level. 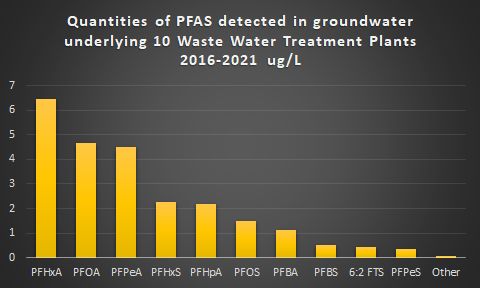 Only PFOS and PFOA have trigger levels under the ANZECC Guidelines. 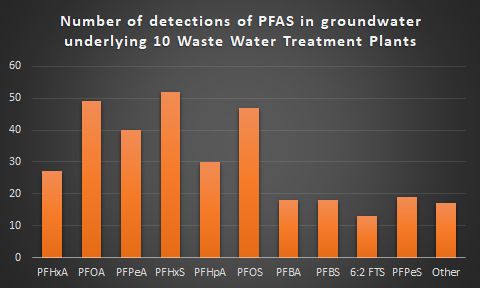 PFHxS, PFOA and PFOS were the most commonly detected PFAS chemicals.

The next blog in this series will focus on PFAS contamination from waste water effluent across Victoria.