45 YEARS OF ACTING UP! FRIENDS OF THE EARTH FEMINIST & QUEER HISTORY

45 years of Acting Up!  Friends of the Earth Queer & Feminist History audio episode 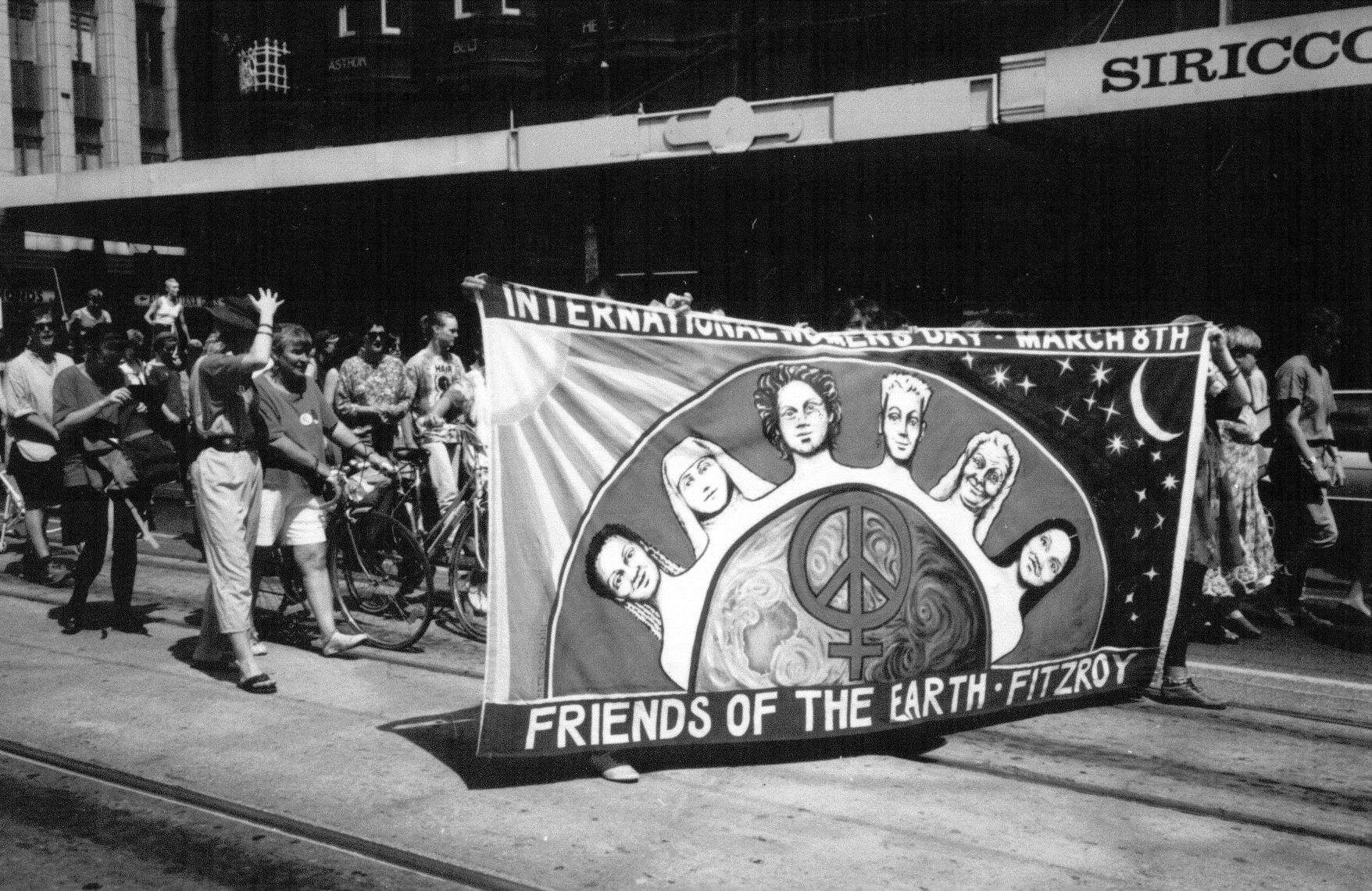 1972 The first Friends of the Earth group in Australia is formed in Adelaide, one of a number of organisations that grow out of a group called Social Action.

1973 Friends of the Earth Melbourne is established out of growing public awareness of ecology, Indigenous land rights, and the women's and gay liberation movements.  FOE forms a radical grassroots environmental action-based collective, with a non-hierarchical structure, standing for social and environmental justice.

1974 Friends of the Earth Australia is founded at a meeting on French Island in Westernport Bay, Victoria, the site of a proposed nuclear reactor. FOE Australia identifies itself as a radical ecology group recognising the need to move to sustainable and equitable social systems to protect the environment long term.

1975 FOE Melbourne’s first Food Co-operative and a bookshop is established as a community space selling feminist, lesbian and queer texts and protest merch.

1978 A women's edition of FOE’s national magazine, Chain Reaction, is published including articles on sexism in the environment movement, women at work, feminism, sexism and the nuclear industry.  A letter to Chain Reaction notes that FOE Sydney and Melbourne are mostly male but, "joyfully non-oppressive".

1982 Chain Reaction magazine publishes debates on internal matters of the environment movement, including feminism and Socialism.  In a series of articles in Chain Reaction, women write that, "the environment movement over the last 10 years has continually failed to examine sexism within its internal structures". Denise Chevalier writes on behalf of FOE Collingwood stating, "we, the women at Friends of the Earth, have fought hard for what we have achieved. We have far more women than men working with us. The women are now at the fore in the decision making in all our campaigns".

FOE evolves into a diverse and vibrant network of groups working at the local, regional, national and international level.  There are 20 local groups and FOE Australia adopts a new constitution marking a shift in the way FOE operates towards local activity and greater strategic engagement with other social movements.

1983 FOE's emphasis on social justice was not appreciated by everyone. "I am dismayed at the shift in Chain Reaction from environmental towards social/political issues such as feminism and homosexuality", wrote one reader.  There is broad agreement that social justice issues remain at the core to FOE’s work.

1986 Chain Reaction forms a new collective including Eileen Goodfield, Fran Callaghan, and Clare Henderson.  During the late 1980s, against the backdrop of the cold war and nuclear proliferation, peace and disarmament are the focus of FOE campaigns.

1990 FOE’s first Radioactive Exposure Tour in South Australia educates people about the social and environmental impacts of the nuclear industry.

2003 FOE nominates the Kungkas for the prestigious Goldman Environmental Award, commonly referred to as the 'green Nobel prize'.  The senior Aboriginal women from northern South Australia win the major international environment prize for their efforts to stop radioactive waste dumping on their traditional lands.

2014 Beth Cameron, co-ordinator of FOE Melbourne’s Food Co-op celebrates 25 years of working for the organisation, and is acknowledged at the Yarra Sustainability Awards.

2019 Friends of the Earth international commits to work for gender justice throughout our federation and to dismantle patriarchy in our societies.  FOE recognises grassroots, anti-capitalist feminism as a key theoretical concept and political tool in the fight for women's autonomy, equality between women and men, and between people and nature.