The urgent need for a Victorian Climate Change Action Fund

With alarming melting of the polar icecaps underway, back-to-back bleaching of the Great Barrier Reef, and Australia seeing a longer and more intense bushfire season, we have no time to waste when it comes to action on climate change.

Yet Australia's emissions are rising and funding for climate change initiatives has been slashed on the Federal Coalition government's watch. The policy failure leaves communities exposed to intensifying heatwaves, bushfires, droughts, and extreme weather.

It's time for Premier Daniel Andrews to push back on the Turnbull government and show leadership on climate change.

But there's a problem... Demand for the climate grant scheme dramatically outstripped what was available.

While the government received over 240 applications the $4.3 million scheme could only support 24 projects. Nine out of ten projects missed out on crucial support.

When we're facing a climate change emergency it's not good enough that positive solutions are missing out on start-up funding.

This is why Friends of the Earth are calling on the Andrews government to ramp things up by committing to establish a Victorian Climate Change Action Fund of at least $100 million before the election.

Since 2014, the Andrews government has strengthened the Victorian Climate Change Act, legislated a permanent ban on unconventional gasfields, extended the moratorium on onshore gasfields, and legislated ambitious Victorian Renewable Energy Targets. These actions contribute towards emissions reductions at the state level.

Strategic investment is now needed to ensure Victoria can meet its Emissions Reduction Targets and enhance its capacity to adapt to climate change impacts.

Efforts to cut emissions and adapt to climate change impacts vary greatly between communities, sectors of the economy (i.e the stationary energy sector, transport, industrial processes, land use, etc.), and across regions. For some sectors, such as stationary energy, what is required to cut emissions is well understood and mainstream. Yet other sectors, such as industrial processes and agriculture, will be required to pilot new technologies, systems, materials, and processes to eliminate greenhouse gas emissions.

The same variation occurs with adaptation and resilience to climate change impacts. For some communities it will be responding to rising sea levels while others must cope with heightened bushfire risk.

While there is no one-size-fits-all solution to the challenges of climate change mitigation and adaptation, all communities, sectors, and regions would benefit from state government investment in innovative responses. 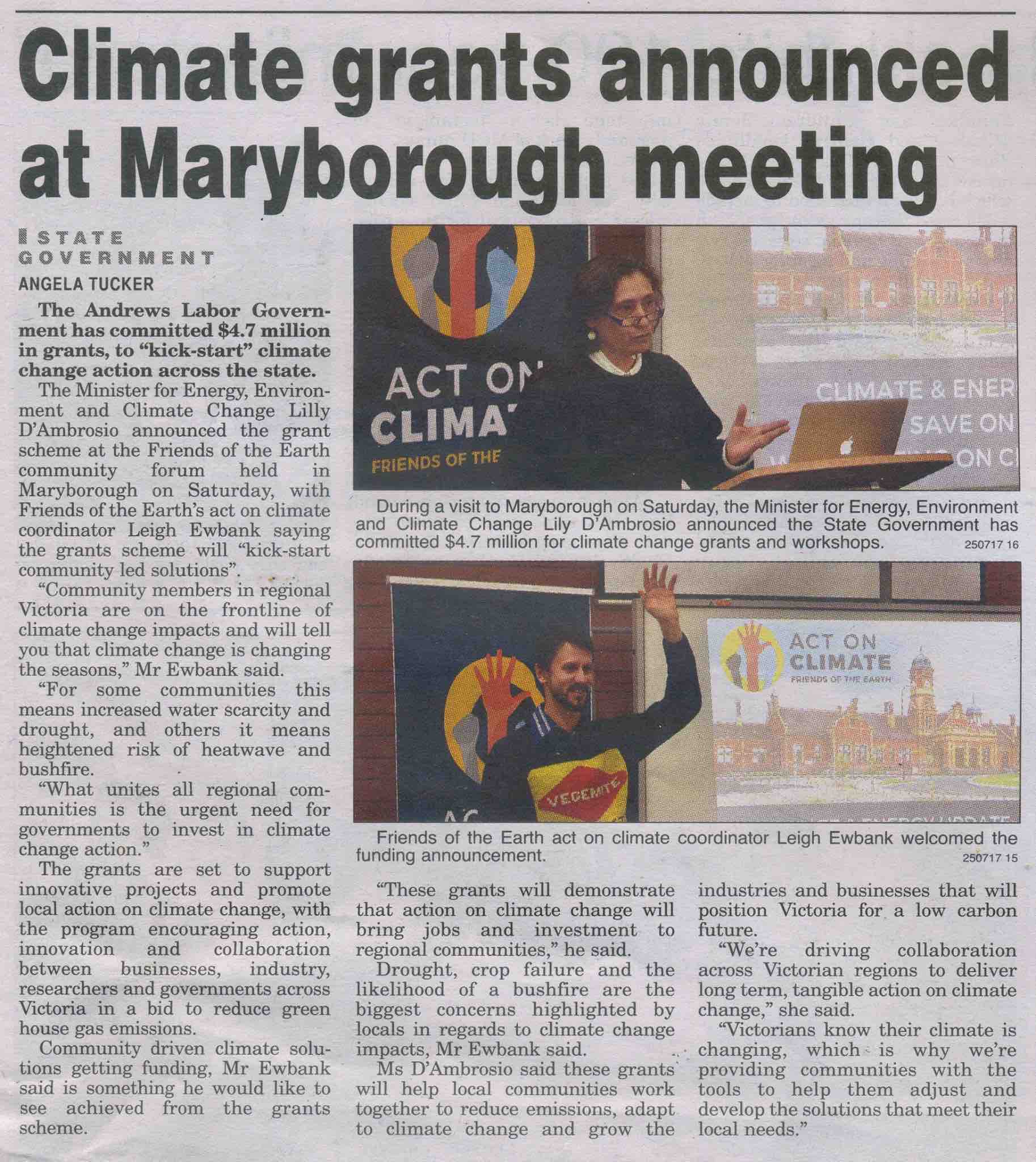 The Victorian government has already shown a keen understanding of the issues and shown leadership on this front through the Virtual Centre for Climate Change Innovation.

The VCCIP grant scheme unearthed strong demand for state government investment in climate change projects. The scheme received more than 240 applications. The VCCIP grant scheme is dramatically oversubscribed. The 240+ applications represent a request up to $72 million yet the $4.3 million scheme could only support 24 projects. (The community of Tarnagulla was one of the lucky applicants).

Friends of the Earth will be engaging with all political parties, community groups, and other stakeholders to build strong backing for a Victorian Climate Change Action Fund in the lead up to the November election.