Say No To Coal-To-Hydrogen In Victoria

Hydrogen is currently considered the next ‘big thing’ in green energy and storage. However, while hydrogen can be made simply using water and renewable energy, it can also be made using fossil fuels. There are currently attempts by fossil fuel proponents, including the Federal government, to co-opt this green energy opportunity to provide a lifeline for ailing coal and gas.

However, right now there is a chance to take action. 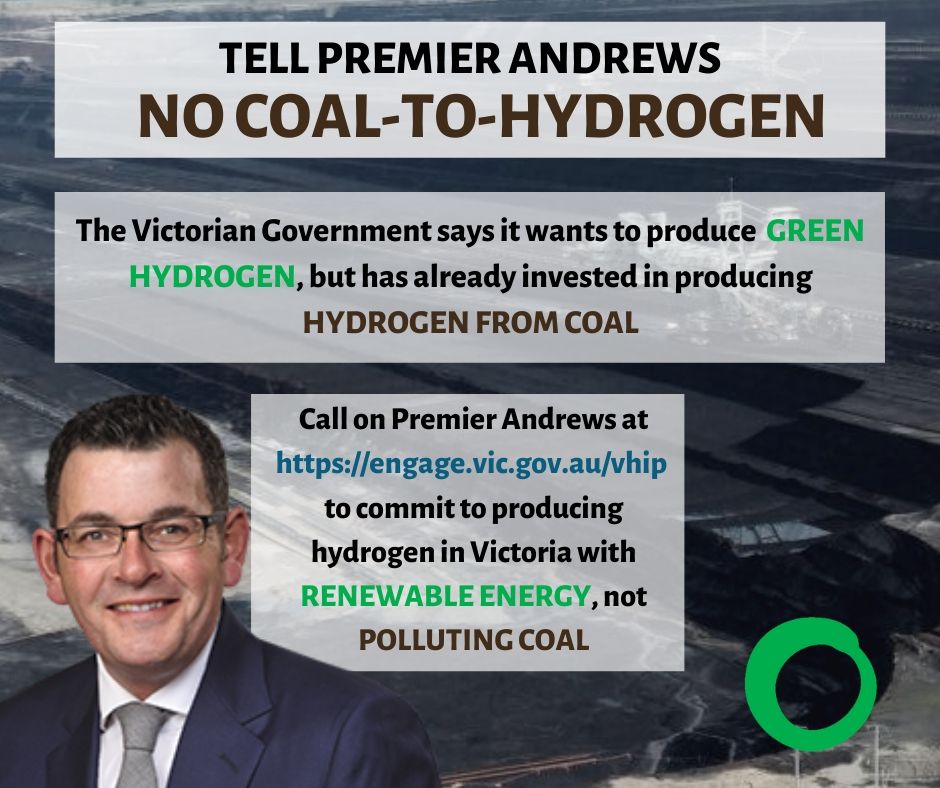 Until the 5th of February, the Victorian government is asking for community submissions regarding the Victorian Hydrogen Investment Program. Whilst this program focuses on green hydrogen (aka hydrogen produced with renewable energy) it is being done alongside the 'Hydrogen Energy Supply Chain', which will use brown coal to produce hydrogen.

With no reliable and safe way to deal with the resulting emissions from the coal-to-hydrogen process, this is out of line with climate action. We are currently living through a climate crisis. Extreme droughts, worsening bushfire seasons, and sea level rise are affecting communities across Australia right now.

If Victoria is to develop a hydrogen industry that doesn't fuel the climate crisis or expose communities to the risks of living near open cut coal mines, it must be done with 100% renewable energy.

You can download the government's discussion paper and make a submission here.

Energy Justice Victoria has identified five issues that could form the basis of a submission:

1. CLIMATE - The climate crisis is already impacting communities across Australia and the livability of regions across the world. We need to act rapidly to reduce our emissions in order to avoid catastrophic climate breakdown. This means no new fossil fuels. The proposal to capture and store the coal waste from the coal-to-hydrogen process is unrealistic and not backed by evidence. The only option for hydrogen production that is compatible with a safe climate is renewable energy.

2. COMMUNITY - Victorian communities are already being impacted by the climate crisis, as well as the negative health and environmental impacts of fossil fuel use (such as black lung disease and polluted water). Additionally, communities where the fossil fuel industry serves as a local employer deserve certainty and support during the necessary transition to cleaner energy sources. Funds being diverted to fossil hydrogen and waste-carbon injection are draining resources that could be used to help those impacted communities transition and diversify. This is particularly the case for those in the Latrobe Valley, an area with significant energy industry expertise and a fount of exciting renewable viability projects that could be further channelled toward renewable energy production and research (Question 4).

3. WATER - Producing hydrogen with fossil fuels or renewable energy requires water. This could be a potential problem with the increase of droughts in a climate-impacted Australia. However, this is where the flexibility of renewable energy is useful. Renewably powered electrolysers (the machines that produce hydrogen from water using electricity) can be located in areas with plentiful water. Burgeoning research into electrolysis using saltwater could also be further emphasised to meet water challenges. Fossil fuels, being static, inevitably compete with the communities around them. Australia has a long history of fossil fuel companies over-consuming water, and running communities, farmland, and the environment around them into the ground because of it.

5. WASTE-CARBON INJECTION - Hydrogen production using fossil fuels is reliant on functioning waste-carbon injection, or carbon-capture and storage technology. However, this technology is highly expensive and, despite massive amounts of public funding over the past decade, has failed to become reliable or commercially viable. It is also been plagued by faults, cost blow-outs and other setbacks. Relying on this technology has two great risks for Victoria. Fossil based hydrogen projects could be continuously delayed due to the non-functioning technology, and put Victoria’s hydrogen industry at a disadvantage to other states. Alternately, projects may go ahead using this unreliable technology, and expose communities and the climate to environmental and health risks if the injection sites or pipes leak CO2.

Also, don’t feel as though you have to cover every question, or even every issue.

Submissions close on the 5th of February, so make sure you get yours written and submitted before then.

With our federal government pushing for new fossil fuel projects to create hydrogen, Premier Daniel Andrews needs to step up and show leadership by supporting a 100% renewable energy future for Victoria’s hydrogen industry.

You can write your submission right now through this link!