Kranky the Koala joined by members of Friends of the Earth Melbourne journeyed up to Tocumwal to host a workshop at Strawberry Fields festival on the Dungala/Murray River amongst the river red gums on Yorta Yorta country. Each weekend Yorta Yorta elders welcomed everyone on the festival grounds to their country as Shane Charles invited us to “tickle our spirit” which was followed by a smoking ceremony and performance. Did you know that Friends of the Earth played an active role with the Yorta Yorta people in the years leading up to the 2010 announcement which saw the establishment of the River Red Gum Forest? This was a historical campaign moment as it marked “​​the first time in Victoria, [where] Aboriginal traditional owners attained co-management of new national parks…”

This year's Friends of the Earth festival workshop was centred around the Strzelecki koalas and why ‘Koalas are Kranky about Climate Change’. With a drying and heating climate and with increasing prevalence of intensifying weather events as demonstrated through recent bushfires and freak storms; this unpredictable climate is significantly impacting koala distribution and habitat. The Strzelecki Koala Map plays a pivotal role in recording our citizen-science activities led by scat-surveys and community sightings. Earlier this year, an intern of SKAT released a report with recommendations on ‘Climate Change and the Strzelecki Koala’. Please get in touch if you would like to consider an internship with SKAT or Friends of the Earth Melbourne. 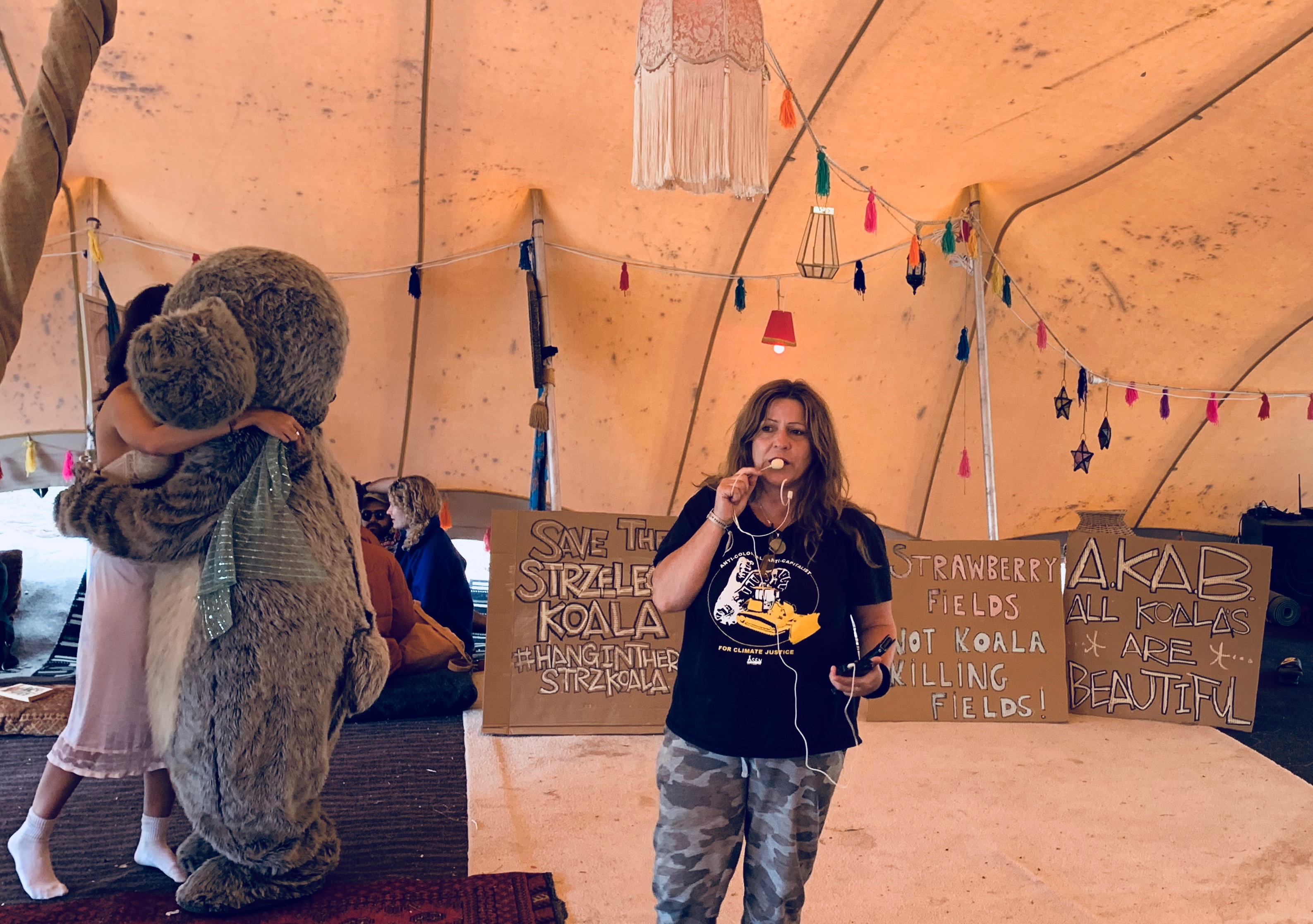 Sam Castro speaking of her personal experience as an activist whilst Kranky is caught sending out koala love and cuddles during the workshop.

Along with climate change, there are an array of threats harming the future and health of the Strzelecki koalas, including disease, logging, habitat fragmentation, car strikes and dog attacks. Yet time and time again in Victoria, we see the Victorian government favour the logging industry over safeguarding our endangered and voiceless wildlife and habitat. Our 'forest' collective are calling for an end to native growth logging. Not only that but we see a series of missed opportunities when it comes to climate action amongst our current federal government, however our 'act on climate' collective won't stop applying pressure on a state and federal level until we see climate justice for all. At Friends of the Earth, we believe in broader system change as many key social and environmental issues and injustices are intertwined, which is why we say "smash the patriarchy, not the forest" and demand "system change, not climate change". We encourage everyone to embrace ‘action as the antidote to fear’, so start mobilising yourself amongst a Friends of the Earth collective to resist current, failing systems so that we can make meaningful, transformative change.

Have you ever been asked if you are most like a eagle, dolphin, wombat, kangaroo? At Friends of the Earth we often carry out a ‘healthy ecosystem' check-in as a way to demonstrate qualities and characteristics symbolic of these four key animal archetypes. Do you like to hit the streets to rally or call on your local MP expressing your concerns? Then you like to get your hop on like a kangaroo. Do you like to burrow in deep to detail in reports, research papers, legislation? Then you are likely to represent a wombat. Activism can take the shape of various animals or roles and it's important that amongst our grass-roots collectives we need people with diverse attitudes and skill sets to compliment a healthy ecosystem.

Once we established everyones inner activism animal and wrapped up the workshop, Kranky was keen to hit the dance floor, busting some groovy moves. Kranky met with many people and was keen to share the story behind the importance of the Strzelecki koala and why Friends of the Earth are determined to secure their long-term protection as the only koalas in Victoria believed to carry genetic diversity. Click on Kranky the koala below to check out our latest film-feature. 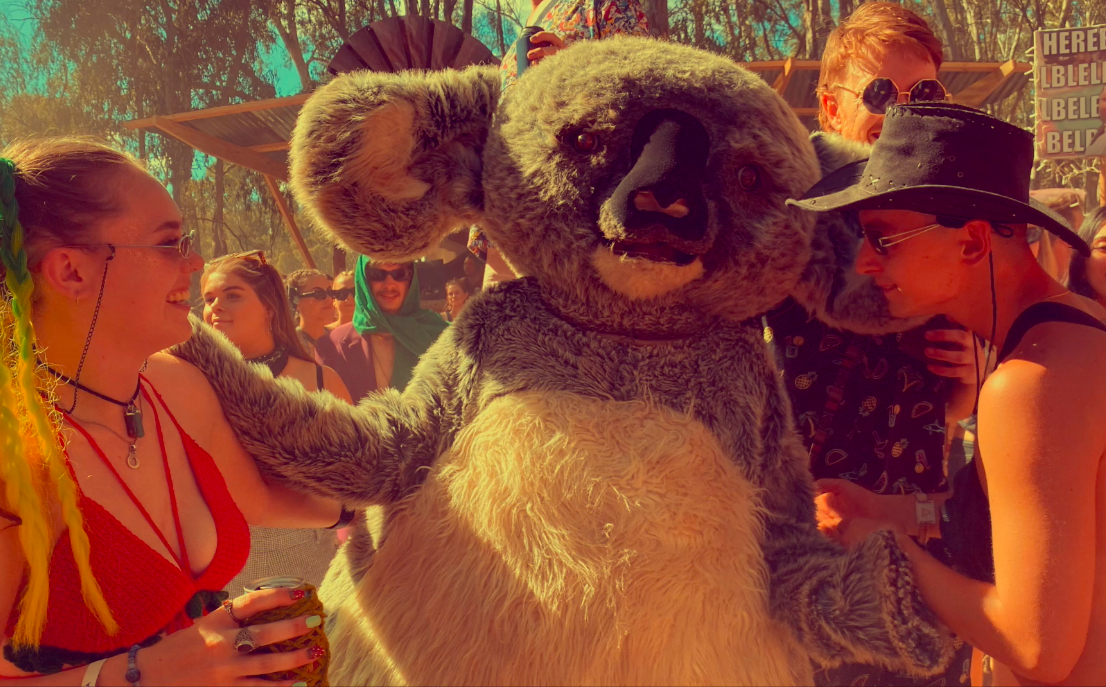 Kranky getting amongst the festival go-er's. Click on Kranky to watch our latest film.

On the final morning of the festival, a tired and hazed festival go-er whilst waiting in line for his morning coffee confessed that he had imagined a giant, fluffy koala dancing behind the DJ yesterday. How bizarre, right…? Imagine if he could now see Kranky’s video!

The SKAT team has recently nominated the Strzelecki koala to be recognised as threatened and listed on the EPBC act, to show your support for their protection, sign our petition to demonstrate community support. If you would like to learn how else to get involved, attend a monthly SKAT meeting, or check out a volunteer induction session to get organised and stand up for what you believe in amongst a community of like-minded and passionate individuals.

To make a financial donation to help sustain and support the Strzelecki Koala Action Team (SKAT) through a once-off donation or as a monthly paying member - with exceptional perks contributions are welcome here.