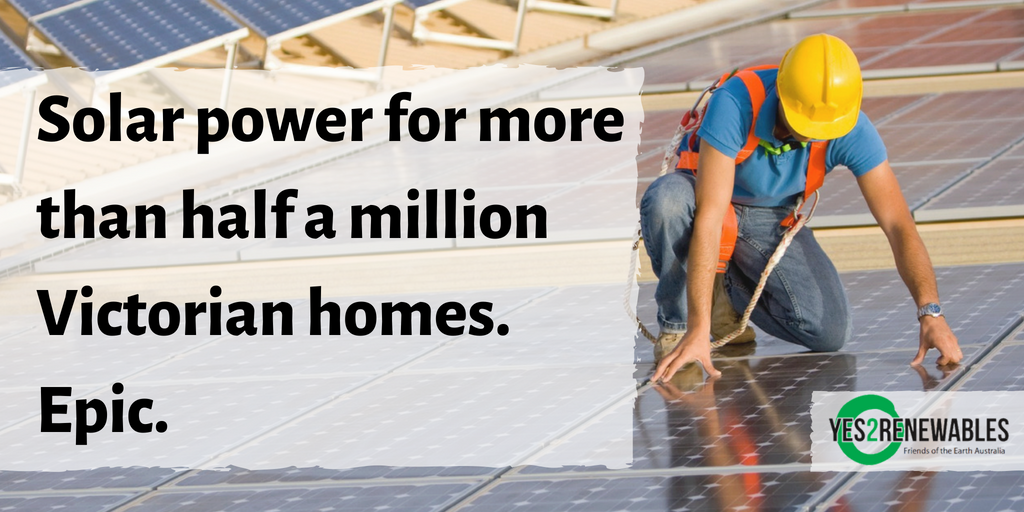 Victoria's Daniel Andrews government has made a dramatic announcement that it will roll out cheap solar power to more than half a million homes if re-elected, committing to a $1.2 billion plan that would offer rebates and no-interest loans so households can install rooftop solar.

Environment group Friends of the Earth commend Premier Andrews for the announcement, and call on opposition leader Matthew Guy to match the Premier's ambition on renewable energy.

The plan is expected to create 5,500 jobs, save Victorians $500 million a year on electricity costs, cut greenhouse gas emissions by almost four million tonnes and contribute to Victoria's renewable energy target of 5,400 megawatts by 2025.

With Victorians facing the toughest bushfire season in a decade this summer, the need to act on climate and rein in greenhouse gas emissions across all sectors of the economy is more urgent than ever.

The Andrews government's announcement comes as the ailing Turnbull government fail to come to agreement over the absurdly complicated 'National Energy Guarantee', which puts thousands of renewable energy jobs at risk and fails the climate test.

The solar program would be delivered by a new agency 'Solar Victoria', which Friends of the Earth believe could also help lead the rollout of renewable energy to low-income households and renters, as well as public institutions including schools, hospitals and the train network.

While the Andrews government continue to outline ambitious plans to rollout renewable energy, the Matthew Guy opposition have pledged to scrap the Victorian Renewable Energy Target but failed to release a policy that will grow renewable energy and reduce emissions.

“It's time for the Guy opposition to match the Andrews government's ambition on renewable energy – pretending we can leave it to the market is simply not good enough when fossil fuels pollute the atmosphere and people are struggling with energy bills” said Pat Simons.

“If Matthew Guy wants to lead the state, where is his plan to create more than 10,000 renewable energy jobs, cut greenhouse gas emissions and give more than half a million households access to cheap solar power?” asked Simons.

You can read more about the program here at the Solar Victoria website.