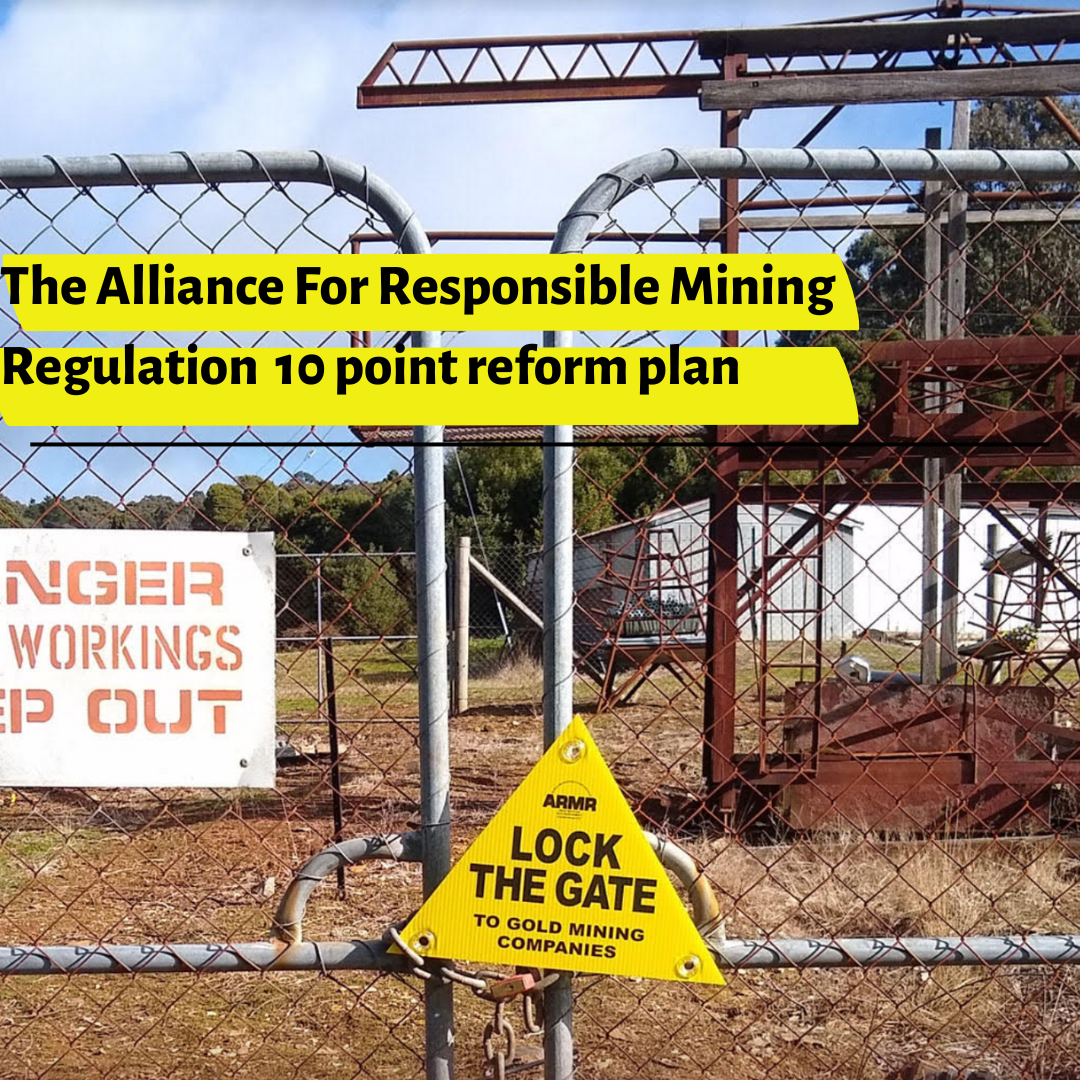 As Victoria continues to experience a boom in minerals exploration and development, it is essential that we learn from past impacts. While mining helped build the state’s economy in the 19th century, the current boom threatens regional communities and farmland, and will use increasingly scarce surface and groundwater. All proposals must be carefully scrutinised and managed to avoid reckless and short-sighted approvals so that this and future generations of Victorians are not exposed to even more social, economic, and environmental harm.

In 2021, a range of local groups concerned about the impacts of mining started to meet to share skills, strategy and knowledge. Over time, this informal network developed into the Alliance For Responsible Mining Regulation (ARMR). ARMR calls for an overhaul of mining regulations that must result in better outcomes for the community and environment.

Now, with a state election in less than 4 weeks, ARMR has launched a blueprint for reform of the laws around mining in Victoria.

Victoria’s Andrews government has today announced a visionary plan to reach 95% Renewables by 2035, end the state’s reliance on coal generation, and establish a publicly owned corporation that will see the public hold a controlling stake in new renewable energy projects.

“This is a breakthrough moment for Victoria’s plans to transform the energy system to act on the climate crisis, that will accelerate the rollout of renewables and put it in public hands,” said Pat Simons, Friends of the Earth’s renewable energy spokesperson.

Friends of the Earth welcomes the Andrews government’s announcement it will power all public sector infrastructure with renewable energy after announcing contracts for six new solar farms and four grid-scale batteries.

Friends of the Earth welcomes the Andrews government’s announcement to legislate a Victorian Energy Storage Target if returned to power at the November state election.

Victoria’s latest greenhouse gas performance data, released today, shows that the Andrews government has overachieved its Emissions Reduction Target of 20% by 2020 by 10 percent.

Victoria’s remaining ageing and polluting coal-fired power stations will shut down up to 15 years earlier than previously predicted, according to a new report from Energy and Resource Insights (ERI) commissioned by Queensland Conservation Council, Environment Victoria and Friends of the Earth.

International oilfield services company Schlumberger are teaming up with TGS, providers of energy data, to propose 3D seismic blasting over a 7.7 million hectare area in the Southern Ocean. If approved, this will be the largest seismic exploration project ever undertaken.

Friends of the Earth (FoE) welcome the Victorian Greens’ proposal to shut down Victoria’s remaining coal fired power stations by the end of the decade.

Localisation and community resilience in a time of transition.

The Andrews government has received support from the Liberal and National parties to enact  changes to the Sustainable Forests (Timber) Act 2004 which could see peaceful protesters fined up to $21,000, or face 12 months in jail.

From the Errinundra Plateau to the Otways and the Cobboboonee forest in western Victoria, peaceful protests have been used for decades to protect important areas of forest and biodiversity. After catastrophic bushfires and an escalating climate and biodiversity crisis, the right to protest has never been more important.