Unions and Community Groups Unite Against The TPP 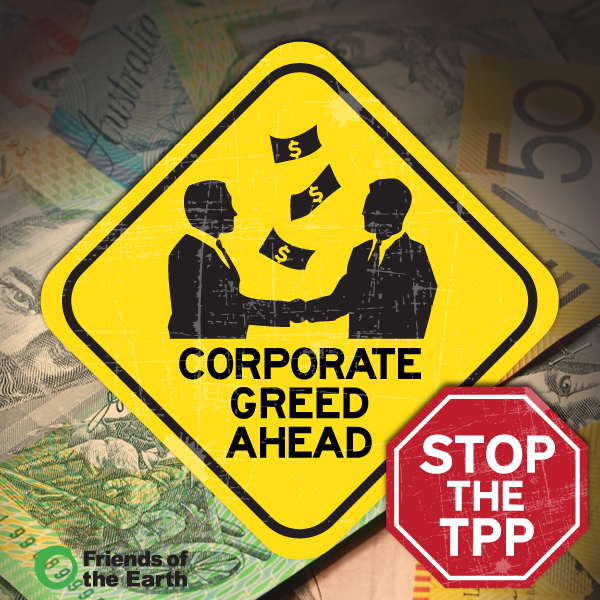 Friends of the Earth was proud to help organise yesterday's Unions and Communities TPP Roundtable, hosted by the Maritime Union of Australia (MUA) at the Australian Council of Trade Unions (ACTU) National Congress 2015.

The Roundtable included doctors, nurses, farmers, unionists, academics, lawyers, environmental groups, community groups and faith groups who have been campaigning around the TPP since 2010.

Friends of the Earth was proud to help organise yesterday's Unions and Communities TPP Roundtable, hosted by the Maritime Union of Australia (MUA) at the Australian Council of Trade Unions (ACTU) National Congress 2015. The Roundtable included doctors, nurses, farmers, unionists, academics, lawyers, environmental groups, community groups and faith groups who have been campaigning around the TPP since 2010. As the secret TPP negotiations move to their final phase, we are reaching a point of emergency and fast running out of time to prevent the passing of this Trojan Horse corporate deal. The time has come for us to join forces and make it clear to Trade Minister Robb and the Prime Minister that the community does not endorse the Government trading away our democracy to multinational corporations.

Today the full plenary of the ACTU Congress reinforced the position of the Roundtable by unanimously passing a motion on behalf of their 2.4 million members, calling the Australian Government to release the TPP text or withdraw Australia from the secret negotiations.

Many of the organisations represented at yesterday's Roundtable, as well as others who were unable to send a representative, have signed on to a joint statement calling on the government to release the TPP text for public scrutiny, independent legal assessment and parliamentary debate, stating:

“One of the foundation stones of any healthy democracy is the right to participate in the democratic process and to be clearly informed about the choices our Government intends to make on our behalf. We cannot in good faith stand by and allow these negotiations to proceed in secret, with 600 US corporations assisting in drafting the TPP text, that potentially has far reaching impact on people’s lives and the environment, while our elected representatives and key community stakeholders are locked out of the process.”

The joint statement further went on to say that:

“As representatives of union members and the broader community, we call on the Australian Government to act in a transparent and democratic way and in the best interests of the people rather than corporations. We believe we need trade policy that engages and works with unions and community groups to uphold human rights, workers rights and protects the environment. Australia needs a democratic and more importantly a transparent process for negotiating and signing trade agreements.  Trade Agreements need to be subject to parliamentary scrutiny and inclusive of the community to allow for meaningful input, acting truly in the interests of the Australian people not big business.”

The Roundtable concluded with unanimous support for the joint statement, and strong commitment from those attending to work together to ensure the Government releases the text prior to signing the agreement. MUA Branch Secretary Kevin Bracken reminded attendees that “there is no end to this trade deal. This is a corporate takeover of our democracy.”

Greens Senator Peter Whish-Wilson stated that the ISDS clause “represents a clear threat to the sovereignty of our nation, simply in order to satisfy powerful corporate interests and their deregulation agendas.”

Friends of the Earth TPP Spokesperson Samantha Castro concluded, “We are stronger when we work together and we cannot allow multinational corporations to erode our sovereignty and bypass our legal systems for the sake of profit and at the expense of our environment, health and future.”

Urge your organisation or community group to sign on to the joint statement.

To get involved in the campaign, head to the Economic Justice Collective page.

Contact your local MP and call on them to release the text for public scrutiny – find their contact details.

Donate to Friends of the Earth, to help us to continue our campaign.