Since the Victorian Labor Government announced an onshore Gas Ban we’ve been hearing a lot of hot air from the industry about gas shortages and threatened price rises. But what’s really behind the industry hype and what are the facts on gas prices and availability?

Despite evidence to the contrary Andrew Smith, chairman of Shell Australia, has continued the line of hyperbole expressed in early August prior to the Victorian decision and the COAG Energy Council meeting. He argued that recent electricity price spikes in South Australia dramatically pointed to the need to expand gas exploration …”without additional gas production spikes in energy prices will continue to hurt consumers and manufacturers,” but it has been found that the price hike was largely the product of gas being linked to the export market resulting in the “very high wholesale gas prices right across the country.”

Further expansion of gasfields will not change this as domestic gas prices are tied to export prices and there is no move to protect domestic consumers. Fossil fuel lobbyists have known this at least since onshore gas expansion was investigated in 2012, but continue to use price rises as an argument for rolling out gasfields.

Another argument for expanding gas fields has been a link of price rises to an alleged scarcity of gas. This is manifestly untrue for Victoria, where the gas reserves in the Bass Strait have been projected to be sufficient for domestic supply for at least thirty years. In Eastern Australia they have been projected to last “indefinitely”. Both of these estimations came from industry sources.

In the much-touted recent COAG gas market reforms all states except Victoria agreed to expand onshore gas extraction to push down prices and, according to Josh Frydenberg, the council “recognised the growing importance of gas as a transition fuel as we move to incorporate more renewables into the system” . But there is no need to expand gasfields due to shortages. Nor is gas an appropriate bridge or “transition fuel”, due to the frequency of fugitive emissions in the processes of extraction, transportation, storage and use. According to the Union of Concerned Scientists, gas has been found to be at least as potent a greenhouse gas producer as coal. A Cornell University paper termed natural gas “a Bridge to Nowhere”. There is no justification for gasfields on the basis of shortages. It is really a case of scientific facts versus the hype of the fossil fuel industry.

Arguments against the gas scarcity scare campaign can be found in the University of Melbourne Energy Institute report, Switching off gas – An examination of declining gas demand in Eastern Australia, 26 August 2015.
Authored by Tim Forcey, the report shows that gas usage in Eastern Australia peaked in 2012, and will continue to decline, and price rises are linked to exports and increased costs of onshore gas. In fact householders can save a great deal by switching from gas heating to reverse cycle air conditioning and from gas hot water to hot water heat pumps.

So what is the real reason for all of the hot air about gas prices and scarcity? The inability of fossil fuel producers to see past digging up the Carboniferous, or perhaps the idea that talking up inflated power prices will reduce the uptake of renewables. It seems that their reluctance to embrace the new technologies of renewable energy is pushing them into further and further distances from the truth, while contradicting even their own experts.

Gasfields won’t push down gas prices because there is no shortage of gas, just a shortage of honesty. 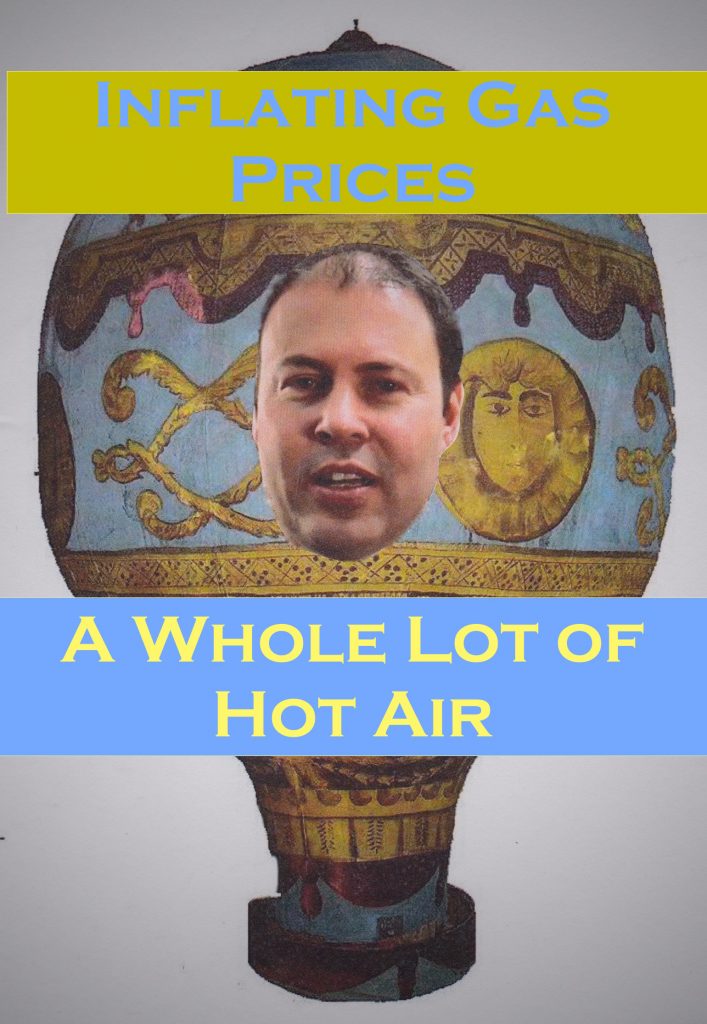