This issue of our poster newsletter addressed these false solutions to the climate crisis and includes stories from FoE campaigners and collectives through an anticapitalist, anticolonial lens.

From ‘natural gas', to burning native forests for biomass energy, unjust developments in the renewables boom (eg; copper mining, lithium, private electric vehicles), 'green' hydrogen, or spruiking nuclear as a ‘green’ solution to the planet's energy needs... This issue will celebrate the resilient communities resisting extractive industries and highlight the interconnectedness of environmental and social justice.

You can pick up a free copy the Summer Issue of our poster newsletter at the Friends of the Earth Food Co-op, or download a digital copy here.

You can also sign up as a member of Friends of the Earth to have a copy of the poster newsletter and our national Chain Reaction Magazine sent you you three times a year!

Thanks to Blair Crisdale for this issues 'Greenwashing Machine' artwork

The nuclear industry, with the help of the Murdoch media, has been staging an aggressive pro-nuclear campaign, presenting nuclear power as a ‘green’ solution to combat climate change. If you take into account the whole process to produce nuclear power, including the mining and transport of uranium, the energy intensive enrichment process, shipping overseas and return of nuclear waste to process it for storage and the running of facilities to guard and monitor the waste for hundreds of thousands of years to come, the level of CO2 produced is substantial. Not to mention the immense use of water in nuclear power production. Nuclear power is far from green.

There is more to climate justice than emissions reduction

Meaningful action on climate change needs climate justice. This means centering the voices of First Nations, marginalised and front-line communities that are already facing the brunt of the impacts of climate change. The entire nuclear chain has a huge impact on First Nations communities. They are the ones severely affected by uranium mines on their country, as well as the targeted destination for the unsafe nuclear waste dumps. After the horrifying nuclear weapons testing in the 1950’s on Aboriginal land, we need to listen to their calls for an end to this industry,  and keep uranium in the ground.

Uncle Kevin Buzzacott  is an Arabunna elder who has initiated and led numerous campaigns against uranium mining at the BHP Billiton owned Olympic Dam mine in South Australia for their environmental contamination, dismissal of Indigenous land ownership and the exploitation of water from the Great Artesian Basin. Talking about the impacts of uranium mining on his country, at our recent Nuclear: No Climate Solution forum, he said:

“We knew what would happen, if you dig up the land, we knew the outcome, that’s why we left it alone. We lived the old ways. Looking after the old country is first. You’ve got to put that country first before you, because we need that, not only that it got here from 40.000 year plus, but we need that for the next little ones, for our little ones, and we need the sacred sites and all our beautiful places out there, so that we can educate our little ones about all the bush tucker, bush medicine and that kind of stuff that will fix you up, it’s been proven for over 40,000 years “

The nuclear industry increases the risk of devastating climate impacts

Of the 10 nations to have produced nuclear weapons, five did so under cover of a supposedly peaceful nuclear power program. Even a limited nuclear war (if there is such a thing) could cause catastrophic climate change by lifting vast amounts of soot into the stratosphere. Burning fossil fuels is the surest way to cause catastrophic climate change; nuclear warfare is the quickest way.

Nuclear power plants are vulnerable to threats which are being exacerbated by climate change. These include dwindling and warming water sources, sea-level rise, storm damage, drought, and jelly-fish swarms. Nuclear engineer David Lochbaum states: "I've heard many nuclear proponents say that nuclear power is part of the solution to global warming. It needs to be reversed: You need to solve global warming for nuclear plants to survive."

It's game over for nuclear power!

Nuclear has priced itself out of the market over the past decade, while the cost of renewables continues to drop.  In 2020, 256 gigawatts of new renewable energy capacity were installed around the world (that's four times greater than Australia's total capacity) compared to just 0.4 gigawatts of nuclear power. Renewables have climbed to 29% of global electricity generation while nuclear has fallen to 10%.

Tasmania is leading the way, with 100% renewables thanks largely to its hydro resources. South Australia gets 62% of its electricity from cheap wind and solar and is on track to get to 100% net renewables by 2030. 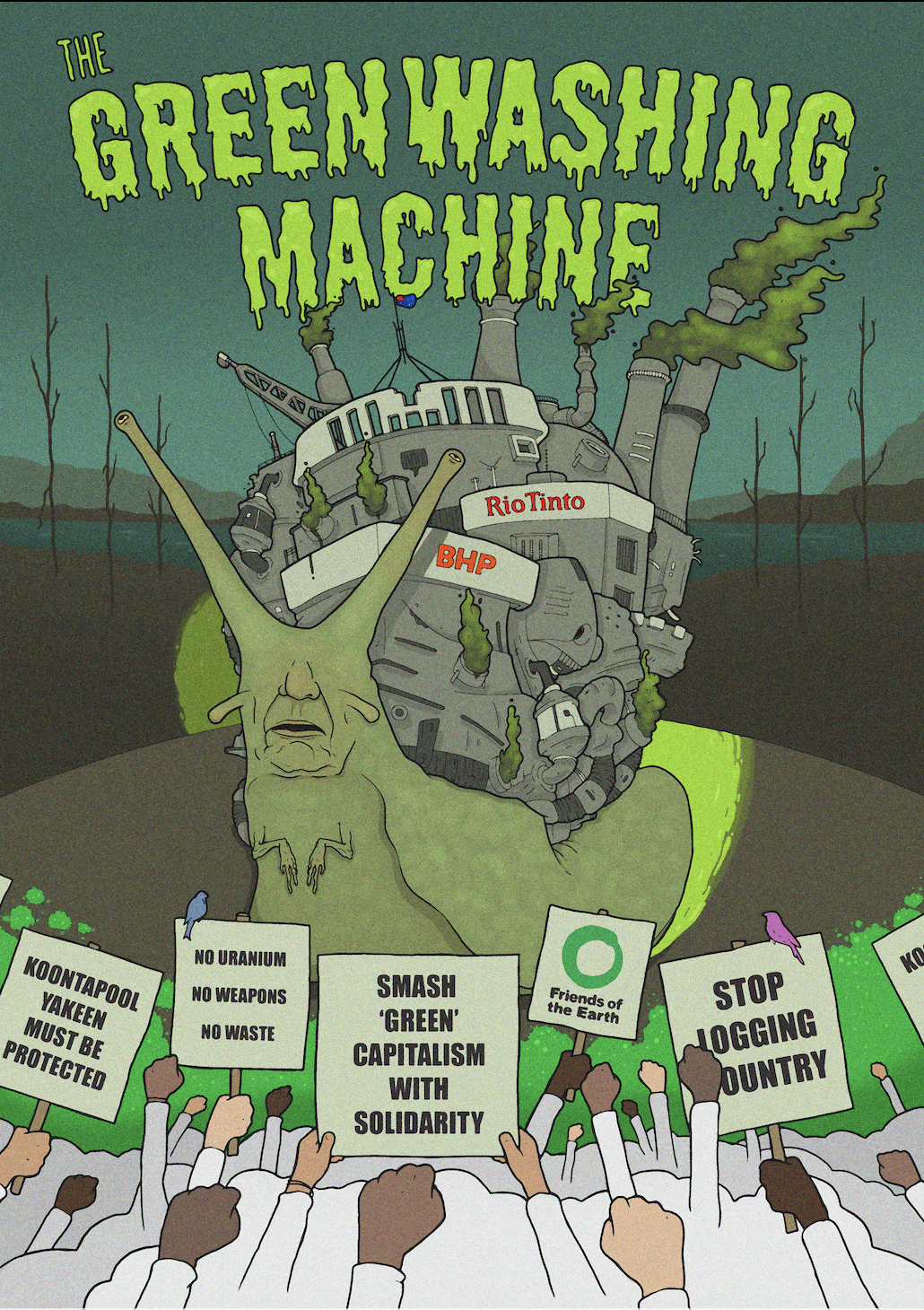 By Yaraan Bundle and Jemila Rushton

Every year Koontapool (Southern Right Whales) return to their birthing grounds along the coastlines of South West Victoria.  Travelling up from the colder Southern and Antarctic waters, they use the southern coast, waters and songlines to navigate their journeys to and through Gunditjmara Sea Country to feed and birth. These families of Baleen cetaceans, sonar/song speaking navigating mammals, are Gunditjmara Ancestors.

The Southern Right Whale birthing area covers all the Sea Country east of the Hopkins River in Warrnambool, all the way along the coast to another coastal sacred site located at Johanna Beach in the southern Otways - Gadubanud Meerreeng - Country of the King Parrot Speaking People, not far east of Cape Otway.

These Koontapool Woorrkngan Yakeen -  Whale Birthing Dreaming Sites, located in specific bays east of the Hopkins River, and back east along the coast - are known resting and feeding sites for the mother Southern Right Whales. Safe havens for mothers and babies. These places on Country are directly related to Gunditjmara Neeyn (midwives). Right across Gunditjmara country we have many species that travel to our region to birth their young, this is also one reason why Gunditjmara is a Matrilineal Nation. The safe bays are also  rich important food and tool source areas for the Gunditjmara women whose creation dreaming, lore responsibilities and kinship to totem, belong to that specific part of Country.

Exploration, seismic blasting and existing gas infrastructure along the south west coastline is already impacting Sea Country, and contributing to climate change. All the while this so-called ‘natural gas’ is still falsely promoted as a ‘green solution’ to the climate crisis by the same corporations responsible for the mess we are in.  For governments and mining companies to take fossil fuels like gas and repackage them as ‘green’ ignores both the immediate environmental risks of gas mining and extraction to Country as well as the irreversible damage of methane and CO2 emissions on the world around us.

We know that oceans and marine life are on the frontline of this ‘gas fired’ recovery. We want to see more people come together in support of the protection of these sacred places and critically endangered species. It is time for everyone to stand up in protection of sacred Country alongside First Nations custodians. We must build movements where First Nations ways of honouring responsibilities to Country can be supported at levels of conservation, protection and education to bring back old ways of doing, being and living in harmony with the land and waters.

We have big plans for the year ahead. To stay up to date with how you can stand with Gunditjmara communities against new offshore gas developments, find the Southern Ocean Protection Embassy Collective on Facebook, and watch this space for a call to action!

On this episode we’re talking about the emergence of green capitalism. What happens when companies begin to embrace those sustainable practices in their supply chains etc. But try to do it without challenging the neoliberal economic system we’re in. Which is damaging to workers rights, damaging to our publicly owned systems, and ultimately damaging to the environment because it continues to privilege profit over people and the protection of our ecosystems.

Director of the United Workers Union, Caterina Cinanni, joins Friends of the Earth Act on Climate Coordinator, Anna Langford, to talk through what green capitalism is, and how we can smash it through solidarity.

Dirt Radio is hosted by Friends of the volunteers and activists. The show airs every Tuesday morning at 9:30am on 3CR 885AM. You can listen to this episode and more at melbournefoe.org.au/listen