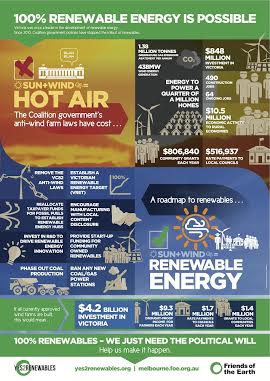 Victoria used to be one of the leaders in Australia when it came to renewable energy and action on climate change.

This has all been lost over the past four years as the Coalition has gutted almost all aspects of the state’s climate action plans, including the Climate Change Bill and renewable energy target. They put in place the most restrictive anti-wind laws in the world, bringing the development of this industry to a grinding halt.

As a result, Victoria has become a laggard on climate action. We have also lost jobs, investment and opportunity, as renewable energy projects move interstate.

But we can turn this around. We can transition to an economy that relies 100% on renewable energy, one that is based on efficient and sensible use of energy, and based on proximity and access, one that enshrines fairness and sustainability into its very core. The technology is available and commercially viable. The only thing that is lacking is political will.

In the final days of the state election, let’s remind the Political Parties that they need to show vision and leadership on the environment and climate change.

Please sign and share our petition calling for a Victorian renewable energy target (a VRET) and new guidelines for wind farms.

Check where your local MP or candidate stands on the key issues of coal, renewables and gas.

Write to the papers, demanding the Parties address climate and environment in their election promises.

You can download a High Res, printable version of the roadmap here. 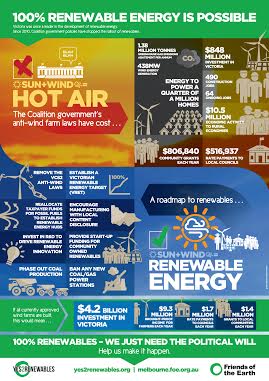