This is the fifth PFAS related blog in a short focusing on 15 FoI requests to Victorian water authorities during 2020/21. The other blogs included: Drinking Water, Groundwater pollution, Effluent pollution and Recycled Water from Waste Water Treatment Plants.

It would appear that PFAS contaminated biosolids, sourced from numerous waste water treatment plants, are being spread throughout Victoria, across a variety of landuses. It is highly likely that similar applications of PFAS laden biosolids will be occurring across Australia. 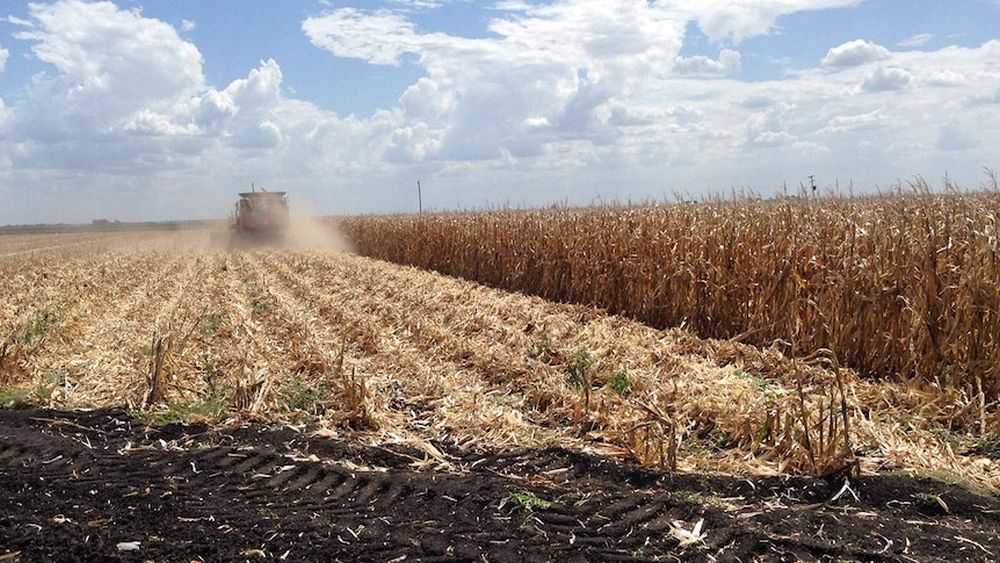 Australia produces almost 400,000 dry tonnes of biosolids per year. Of this amount, ~70% is applied to agricultural land, one quarter is used in landscaping and land rehabilitation and the remaining 5-6% is landfilled, stockpiled or discharged to the ocean.

Biosolids are marketed as being rich in nutrients and similar to soils.  Most biosolids applied to agricultural land are applied to vineyards, pastures, cereal crops and olive plantations. Few users of the biosolids however, would be aware of the PFAS contamination issue and the bioaccumulative nature of PFAS chemicals.

Biosolids are often mixed with organic waste to create compost. In order to dilute the PFAS content of high quality biosolids, they are mixed with uncontaminated soil. Biosolids can also be used in resource recovery where they are burnt with the captured gas used for electricity generation and whilst the remaining ash (biochar) is sometimes reused.

Biosolids are regulated in Victoria through the Environment Protection Authority and are classified by two factors, concentration of contaminants and level of treatment. The EPA in Victoria has proposed a PFAS level for impacted soil (not biosolids) of 0.004mg/kg for the sum of PFOS, PFHxS and PFOA. Queensland have also developed more extensive guidelines, ranging over a larger number of PFAS chemicals than in Victoria. Soil guidelines under the PFAS National Environment Management Plan (NEPM), suggest 0.009mg/kg for PFOS/PFHxS and 0.1mg/kg for PFOA for human health screening for residential gardens with significantly higher levels for public open space, and industrial/commercial sites. 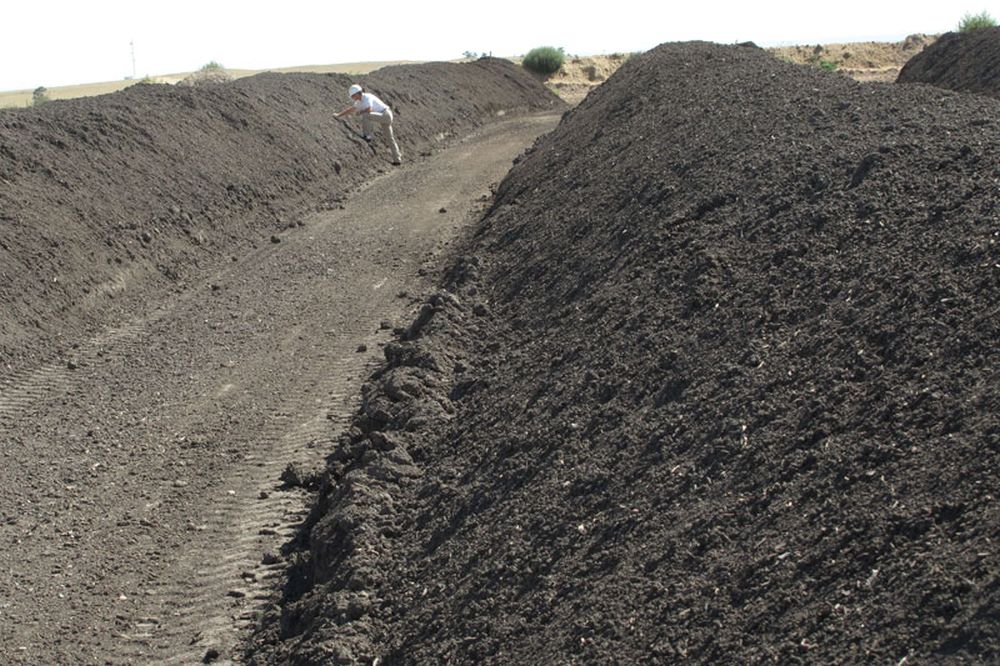 Long chain PFAS phased out, but not short chain

Long chain PFAS have been shown to be long lasting and bioaccumulative. PFOS and PFHxS for example have a half life in the human body of approximately 5 years, whereas short chain PFAS, such as PFBA have a half life of several days. Because of the long term problems associated with long chain PFAS some have been added to the United Nation’s Stockholm Convention’s list of Persistent Organic Pollutants. Long chain PFAS chemicals have been phased out of manufacturing for some time.

What are some of the sources of different types of PFAS?

Recent studies have also highlight that short chain PFAS may be more absorbed by vegetable crops than long chain PFAS.

In terms of the Victorian EPA's combined sum guideline of 0.004mg/kg, 85% of Victorian WWTP’s* breached the sum of PFOS, PFHxS and PFOA guideline at some time or other. Almost every biosolid sample tested positive for PFAS.

The FoI results revealed that 520 different test regimes for PFAS in biosolids occurred in Victoria over the past few years. Approximately 70 sample regimes came in under the EPA Interim Position Statement on PFAS. Meaning that 86% of samples breached 0.004mg/kg guideline, meaning that the vast majority of biosolids in Victoria exceeded EPA Guideline levels and would require some form of “dilution” to make them EPA guideline compliant. It also means that users of biosolids need to understand that the application of biosolids on farms etc will also mean that a bioaccumulative toxin is also being applied to land where the biosolids are being used. 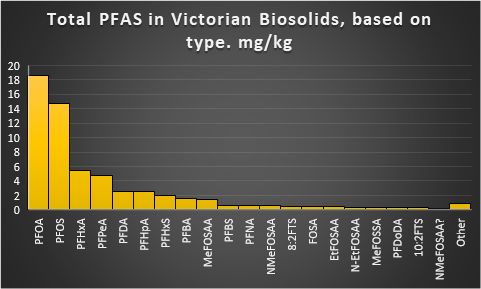 ~57% of PFAS detected in Victorian biosolids were the long chain PFOA and PFOS. The exact make up of PFAS chemicals varied between waste water treatment plants. 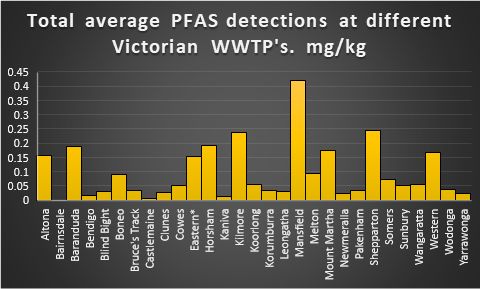 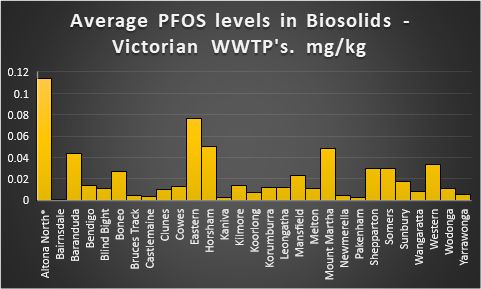 *The Altona North detection came from one sample only. PFOS levels at recorded at Eastern Treatment Plant were probably highest, however data sets provided by Melbourne Water were difficult to interpret accurately. 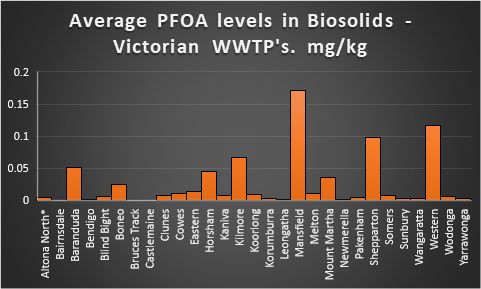 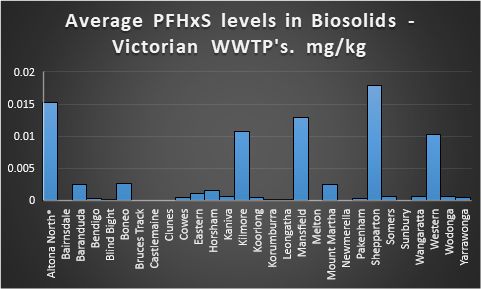 *The Altona North detection came from one sample only, with highest average levels recorded at Shepparton, Mansfield, Kilmore and Western Treatment Plants. Note though that PFHxS levels were generally 10 times lower than PFOS and PFOA.

The highest levels were PFOA found in a Western Treatment Plant biosolid sample taken in 2016. 550 times over the 0.004mg/kg EPA Guideline level.

Biosolids can also be processed outside of the areas that they were created. For example South Gippsland Water can stockpile hundreds of dry tonnes of biosolids at Leongatha but also have transferred biosolids to Pinegro Composting Facility at Bacchus Marsh and Gippsland Water’s Soil and Organic and Recycling Facility at Dutson Downs. Friends of the Earth has also learnt that biosolids from Altona North in Melbourne are also ending up at Dutson Downs. Strangely, no information on biosolids was supplied to Friends of the Earth from Gippsland Water during the FoI process.

Gippsland Water recycle 100% of their 19,690 tonnes of biosolids, plus an additional 6,300 tonnes from external water corporations and turn it into compost at the Gippsland Regional Organics Facility. These biosolids are then combined with 72,000 tonnes of green waste from Melbourne and surrounds to produce a compost which is then tested to Australian Standard (AS4454)* and sent to farms throughout Victoria.

(*PFAS is a real concern to all stakeholders and some GO streams are at risk of herbicide contamination, but these chemicals are not tested for as part of AS4454 or as a requirement in the organics processing guidelines. see Review of Regulations and Standards for Recycled Organics in Australia. Final Report for Department of Agriculture, Water and the Environment June 2021.)

Westernport Water produce 500 tonnes of biosolids per year including use in food crops consumed raw including lettuces, strawberries and carrots. Some water authorities, such as Grampians Wimmera Mallee Water allow customers to take and use biosolids for free, after they have been stockpiled for 3 years. Biosolids from Lower Murray Water's Koorlong WWTP are applied to two local farms. 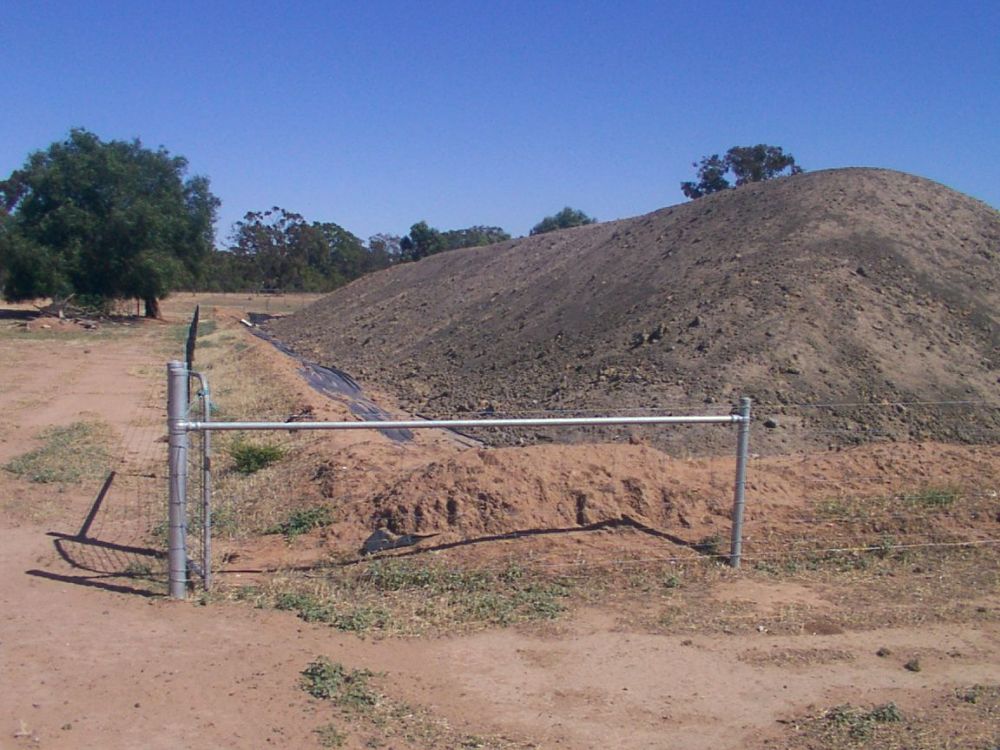 Grampians Wimmera Mallee Water Biosolids stockpile at Charlton. Members of the public can take loads of biosolids for free, after the biosolids have been stockpiled for 3 years.  Image: GWMWater

Melbourne Water provide biosolids that are used on 30,000ha of farmland per year. Landowners have to reapply for permission to use the biosolids every 5 years and guidelines set by the EPA have to be met. Melbourne Water have also been investigating the use of biosolids in bricks, cement and energy and have used hundreds of thousands of tonnes of biosolids to rehabilitate an old landfill in Clarke Road Springvale South. 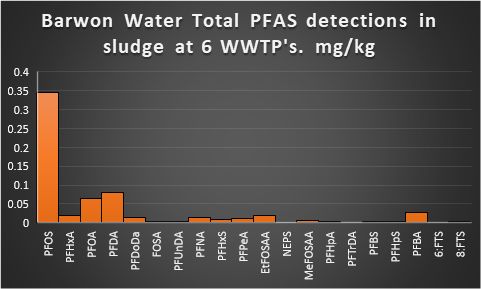 PFOS dominates PFAS detections Barwon Water sludge across 6 of their WWTP's. According to FoI information supplied by Barwon Water. "WRP sludge that is not applied to land. It is supplied to a third party, in combination with all other WRP sludge, for further processing into a dried biosolid".

60,000 tonnes of Barwon Water's biosolids instead of being sent to the Western Treatment plant are now being sent to Australia's largest thermal drying biosolids facility operated by Trility. Pellitised biosolids are then sent to over 30 broad acre cropping and pasture farms across Central and Western Victoria. Greater Western Water's Melton Recycled Water Plant is converting biosolids to biochar again to be used on a number of farms. South East Water is also uses pyrolysis, where high temperatures are used to destroy pathogens and bioplastics in biosolids. Does pyrolysis remove PFAS and does the process create PAH's, Poly Aromatic Hydrocarbons?

PFAS detections in biosolids in liquid form were also tested at eleven waste water plants. These measurements were probably carried out prior to the solidification process. Levels of PFBA, largely detected at Melton were surprising. Melton WWTP also detected high levels of PFBS as a biosolid in solid form. PFBA is a breakdown product of other PFAS used in stain-resistant fabrics, paper, food packaging and carpets. It was also used for the manufacturing of photographic film. PFBS has been used as a surfactant in industrial processes and in water-resistant or stain resistant coatings on consumer products such as fabrics, carpets and paper. How are these ending up at Melton? 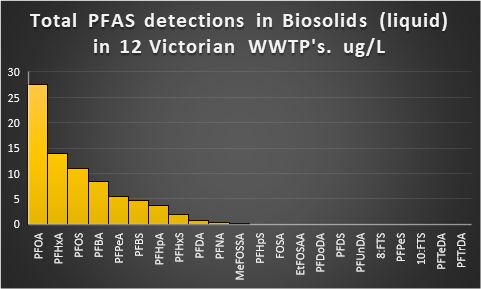 The PFAS issue is the toxic issue of our time. Only 5 years ago, few people had even heard of it. The worrying aspect is that PFAS chemicals have been manufactured since the 1940's. Yet almost 80 years later we are now only starting to come to terms with the legacy of these dangerous chemicals. The fact that PFAS chemicals are entering the domestic sewerage system means that the source of the chemical in many instances will be people. What is truly concerning though, is that the highest PFAS concentrations will be in people's homes. "Once again, Government's are starting to act only when the horse has well and truly bolted."

If you would like to donate to Friends of the Earth, acknowledge that the donation should be directed towards toxics.