The critically-important COP26 climate summit is just less than a month away and Prime Minister Scott Morrison is in the hot seat.

Pressure from global leaders and the climate movement has shifted the debate from 'net-zero' by 2050 to what cuts must be delivered this decade.

Will the PM listen to the community and take a strong target to the summit?... Or will he stick with the weak target set by Tony Abbott over half-a-decade ago?... We'll soon find out. 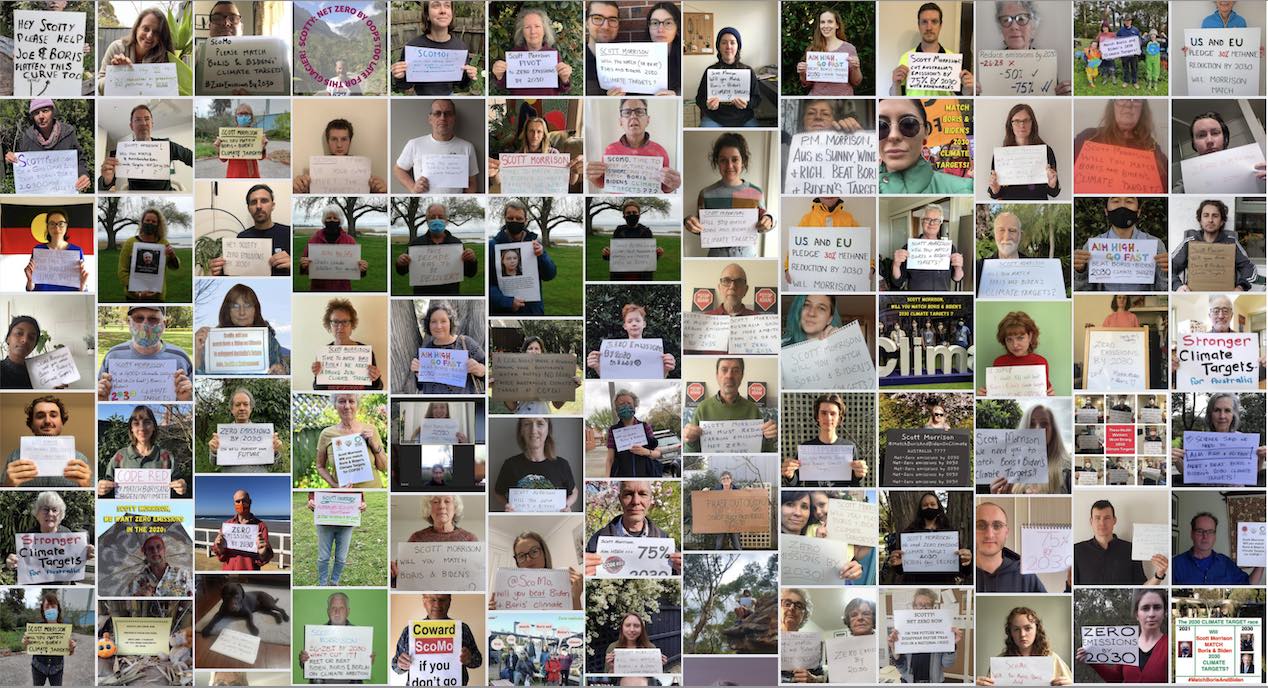 One Friday 1 October, hundreds of community members from across the country took to social media to demand Scott Morrison match the United States and United Kingdom's 2030 climate targets for COP26.

After months of online actions, social media, and lobbying, the Australian Financial Review conceded last week that the Prime Minister can no longer "detour around" a 2030 target.

Meanwhile, The Age reports that 'moderate Liberal' MPs have argued that "Australia should lift its emissions reduction target to bring it in line with key allies like the United Kingdom and United States."

Our successful Day of Action has cemented the 2030 target as the key litmus test for the government right on the cusp of its decision. And it has established the US and UK's level of ambition as a benchmark and stepping stone towards deeper, science-based targets.

Click here to take a look at the Day of Action photo gallery (and here for the Facebook gallery). 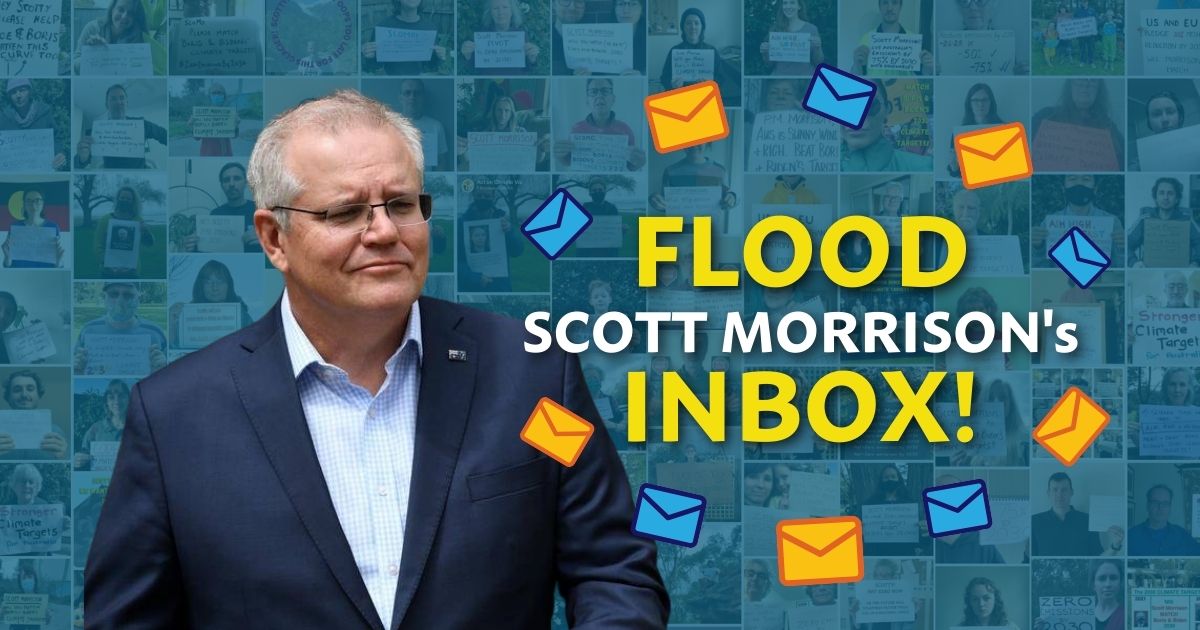 The window to influence the government's decision on Australia's 2030 climate target is closing, so the community must raise its voice one final time.

We took to social media to demand Scott Morrison match Boris and Biden's climate targets. Now it's time to take that message to the Prime Minister's inbox.

Friends of the Earth has whipped up a tool that allows you to email the Prime Minister in less than a minute.

ACT NOW if you want to see Australia increase its 2030 climate target! 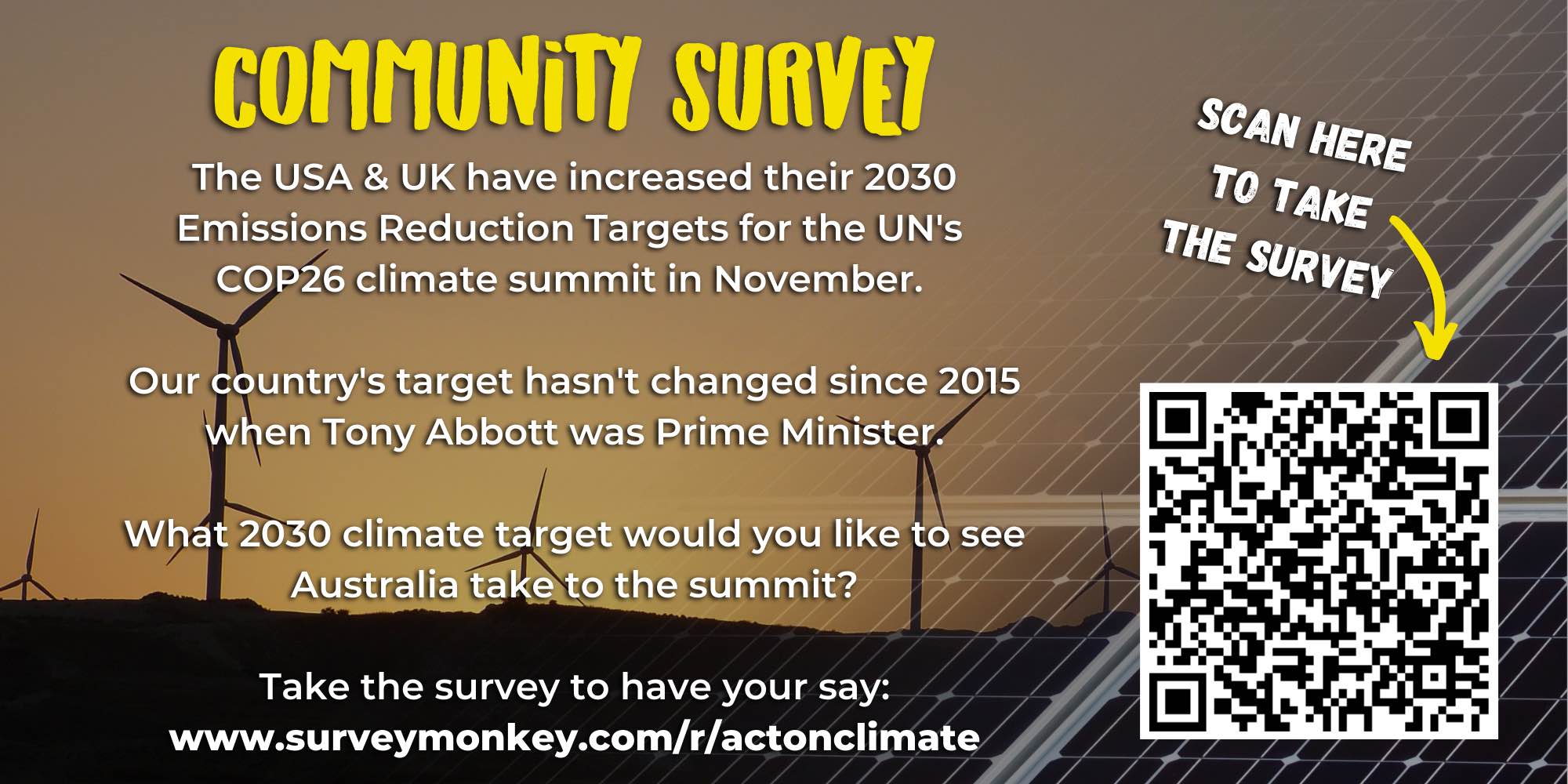 Act on Climate, Lighter Footprints, and other local allies have joined forces to rollout a community survey on climate policy in the inner eastern and south-eastern suburbs of Melbourne.

Committed volunteers are now distributing over 30,000 flyers to encourage participation so we can gauge the community's views on climate impacts, solutions, and importantly, what level of ambition they'd like to see Australia take to the COP26 summit.

We'll be presenting the survey findings to Liberal government MPs such as Treasurer Josh Frydenberg, Katie Allen, and Gladys Liu, and other decision makers ahead of COP26. We want to ensure they make an informed decision on the emissions cuts Australia will deliver this decade.

If you live in the inner eastern or south-eastern suburbs, please have your say on Australia's 2030 climate target. 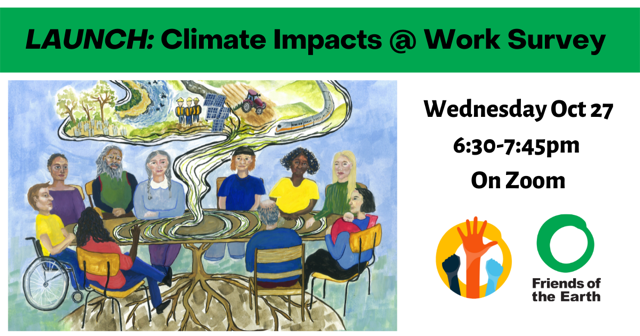 Tackling the climate crisis in a socially just way means putting workers right at the core of solutions.

With workers in a diversity of sectors already on the frontlines of climate impacts in Victoria, there is important work to be done to bring a broader sphere of workers into the conversation about the response.

Join Friends of the Earth, Victorian Trades Hall, and union members on Wednesday 27 October for the launch of the Climate Impacts at Work survey project.

Friends of the Earth is collaborating with several unions to kick off a major surveying effort of rank-and-file members—from hospo workers, to train drivers, and office workers. The survey will investigate climate impacts in the workplace and the solutions workers want to see from governments.

Come along to hear from speakers from the union movement and Friends of the Earth about how you can get involved, how the project will work, and why climate change is core union business! 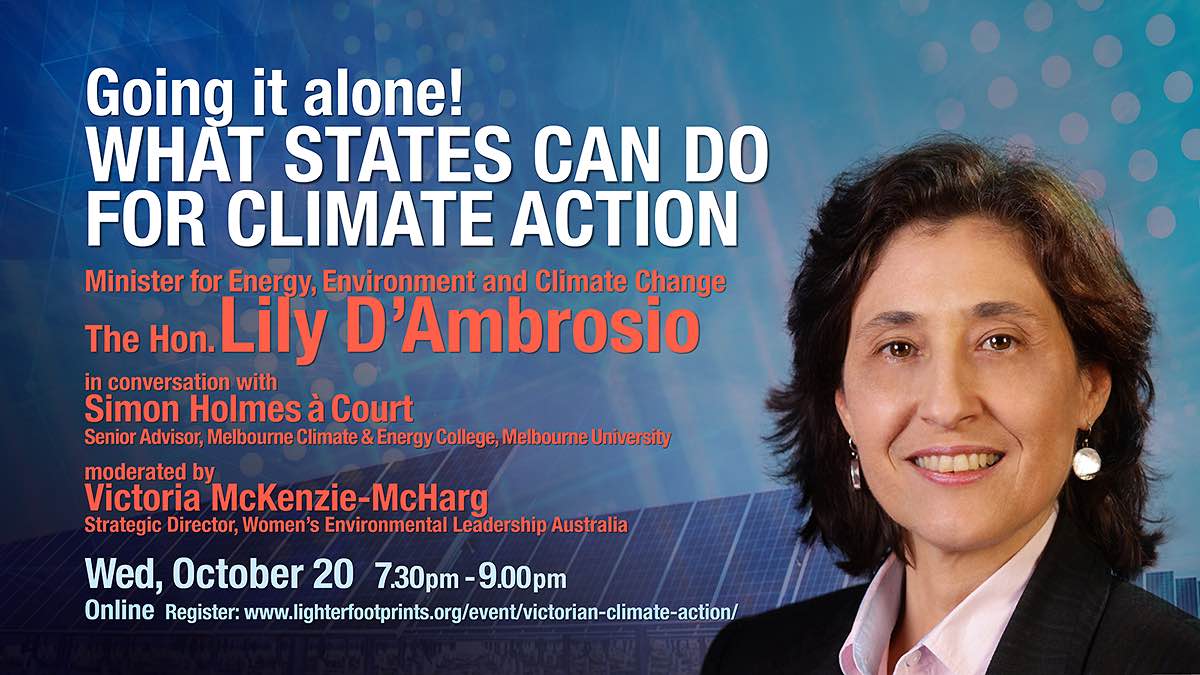 While the Federal government's approach to the climate crisis has been underwhelming, positive signs of progress can be seen at the state and territory level.

The Victorian government has committed to halve the state's emissions this decade. Its Victorian Renewable Energy Target has created thousands of jobs and is the reason for record-high solar and wind in the electricity grid.

Lighter Footprints will present an online event featuring Victorian Minister for Climate & Energy Lily D'Ambrosio on Wednesday 20 October. The Minister will join energy expert Simon Holmes à Court and Victoria McKenzie-McHarg in conversation. It's an event not to be missed.

Register for this exciting online event. 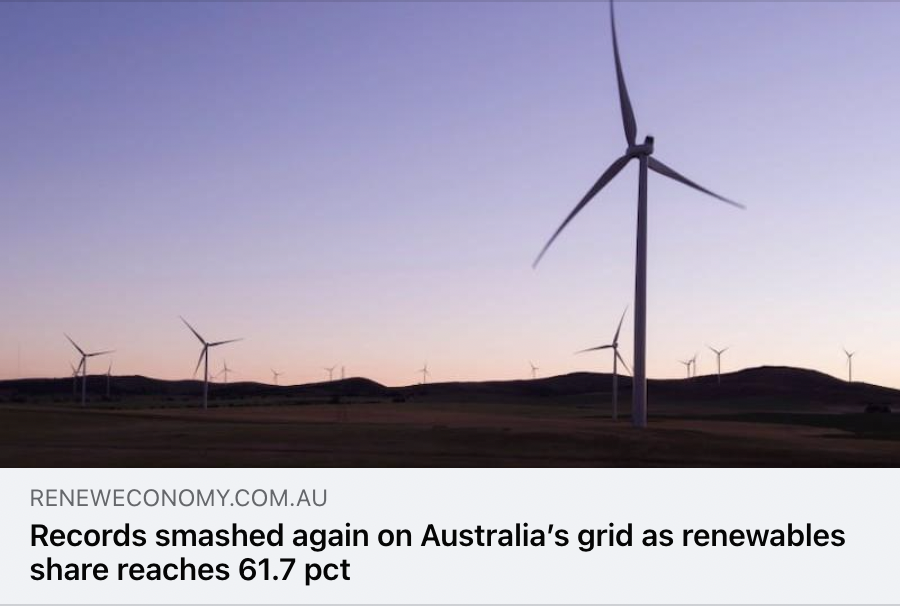 "Victoria wants to reassure investors in wind and solar farms and storage such as giant batteries that it will not adopt any mechanism within the (National Electricity Market) that undermines the state’s ambition to cut carbon emissions,” Minister D’Ambrosio told The Age.

"At 1.15pm on Friday... the share of renewables on Australia’s main grid, the National Electricity Market, hit a record 61.7 percent," reported RenewEconomy, "just four days after setting a new peak of 60.1 per cent."

Hats off to all the community members campaigning for ambitious climate and energy policies... It's working! 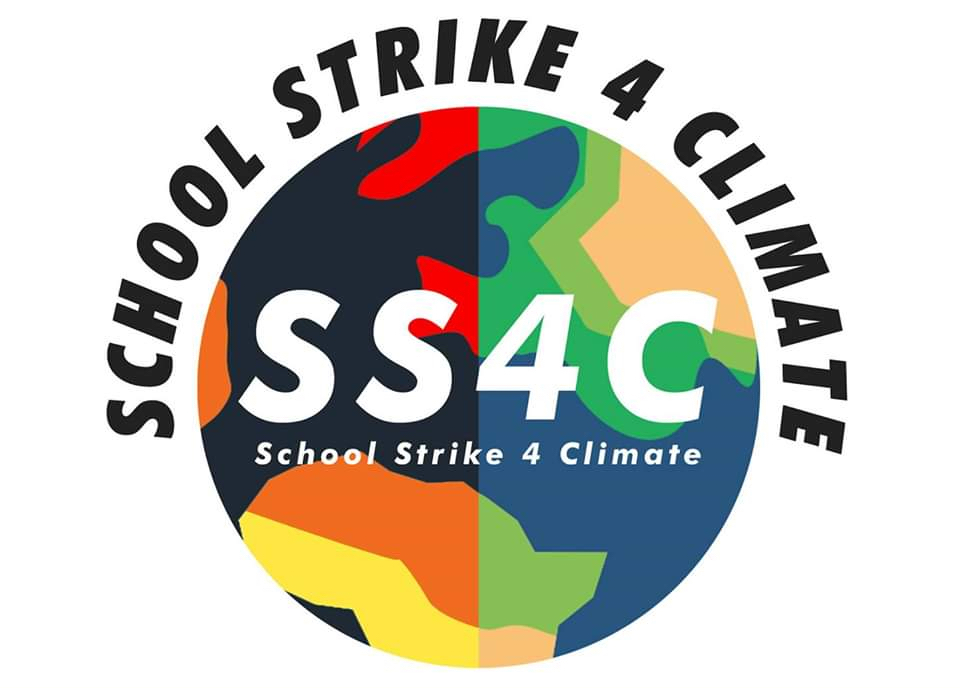 The Climate Justice event calendar is taking shape over the next two months. We'd love to see you at the following:

And remember, you're always welcome to join us for our weekly Act on Climate meetings. We're holding online meetings via Zoom in 2021, so please register for the link in our events section.

That's all from us for now. See you on the campaign trail.