What a year it has been! 2018 is shaping up as a HUGE year with the Victorian State Election due. Can you help us get get ready for the election and help us show that #VicLovesForests with a donation today?

We congratulate Lidia and look forward to working with her, and we call on Premier Andrews and cabinet Ministers to make declaration of the Great Forest National Park a priority in the coming months.

Polling commissioned by FoE and other groups revealing that more than 81% of Northcote voters support the creation of the GFNP and for more than 1 in 5 voters the protection of forests is their most important issue, as reported in The Guardian.

You can take action and email the Premier and Cabinet calling for the creation of the Great Forest National Park, the protection of East Gippsland's Emerald Link and fair and just transition for workers. Take action now. 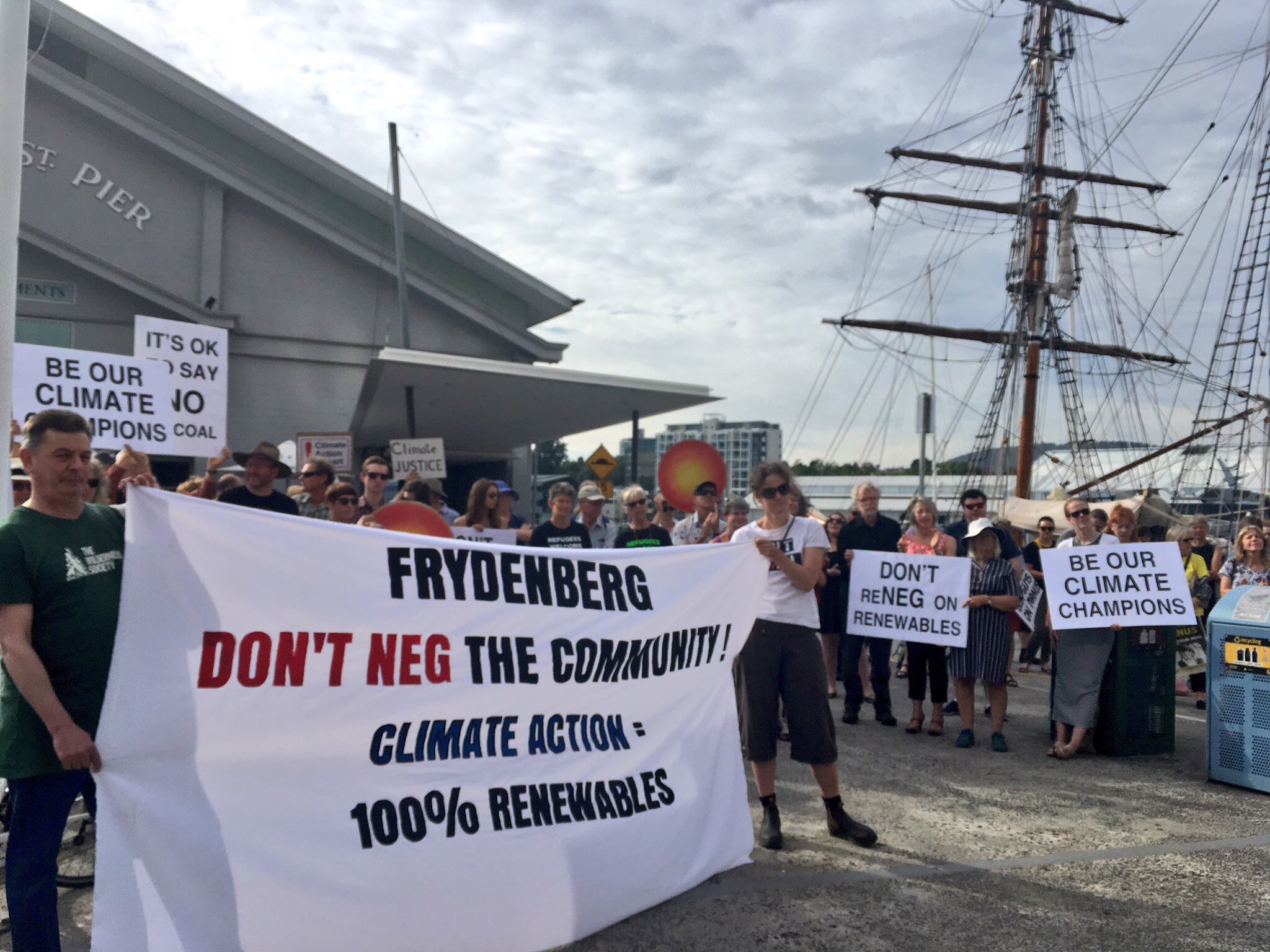 More than 50 community members rallied in Hobart on Friday the 24th of November outside the COAG energy council meeting, calling on state enegy ministers to reject Turnbull's latest energy thought bubble the "National Energy Guarantee" or NEG.
The snap rally organised by Yes 2 Renewables, AYCC Tasmania and Climate Action Hobart pointed out the Turnbull government's anti-renewables stance, hostility to climate action and failure to consult the community on energy and climate policy.
The community wants to see a commitment to ambitious action on climate change, not backward policy that would cripple renewables and lock in subsidies for coal and gas.
If you want to get involved with the Yes 2 Renewables campaign, contact Pat Simons at [email protected]

Victoria: A state that works for people, climate, environment, and economy

In 12 months time Victorians will head to the polls. With community concern about climate change on the rise, it's an issue that all political parties must must address in detail.

The solutions Friends of the Earth propose will build sustainability, reduce resource consumption and the creation of greenhouse pollution, create new – and good – jobs in new and emerging sectors, and increase social cohesion and equity. To find out more, support our work, and get involved, please check here.

'Honk if you hate tolls' heats up!

With the potential approval of Transurban's Westgate Tunnel tollroad, Sustainable Cities has ramped up pressure with a series of actions across Melbourne. Getting out and hearing from the community we got dozens of honks in opposition of toll roads. The community concerns haven't been addressed, and so now is the time to make sure the Minister stands with the community and not Transurban.

Make sure you've emailed the Planning Minister Richard Wynne to show your opposition to the plan: http://www.melbournefoe.org.au/say_no_to_westgate

The last four weeks have been massive for forests!

Logging was halted in old growth forest in Kuark, East Gippsland through a legal injunction and following more than 6800 people emailing the Environment Minister. You can read The Guardian coverage of the Kuark forest here and The Age coverage of the Supreme Court case here.

FoE Melbourne made protection of native forests a major issue of the Northcote by-election and a Federal court case was launched by Environmental Justice Australia to stop the logging of threatened wildlife habitat in the Central Highlands.

If you're interested in joining the Forest Collective contact Sarah Day [email protected]
Weekly meetings are held Thursday's at 6pm at Friends of the Earth, Smith Street.

A milestone for Victoria's efforts to tackle climate change

November 1st was a milestone for Victoria’s efforts to tackle climate change and a big week for Friends of the Earth’s push for a climate budget.

On Wednesday November 1, over one hundred community members gathered on the steps of Parliament House to celebrate the commencement of the strengthened Climate Change Act and call for more action. And on Thursday November 2, we kicked off the conversation about ‘what next’ for climate policy, making the case for a climate budget in the Parliament with an event featuring Minister Lily D’Ambrosio.

You can support the push for a climate budget by making a tax-deductable donation today.

Weekly Act on Climate meetings are held Mondays 6pm at Friends of the Earth, Smith Street Collingwood. If you're keen to get involved contact [email protected]

Give a gift that supports FoE this festive season

The end of the year is fast approaching! If you're struggling to find the perfect gift for all the activists in your life, we've got you covered. We've updated our online shop with fresh FoE Melbourne Merchandise, as well as heaps of T-shirts, hoodies and more from our Quit Coal and Nuclear-Free campaigns and our Forest Affiliates Goongerah Environment Centre (GECO).

Jump online to the FoE shop and get all the ethically sourced and locally made gifts for your friends and family, and also know that you are supporting the FoE family to keep fighting for social and environmental justice in 2018.
We will post Australia-wide! Please contact [email protected] for any further merchandise enquiries.


A Day of Action on Climate

On the 1st November, Friends of the Earth Melbourne took over the city with a Day of Action on Climate. At the final of three actions, Quit Coal in collaboration of other groups rallied outside the International Mining and Resource Conference (IMARC) while Adani Australia’s general manager Muthuraj Guruswam promoted the Carmichael coal mine to conference-goers inside.

The protest aimed to highlight the impacts the mine will have on climate, water and reef far beyond Queensland’s borders. But most importantly a display of solidarity and support for the Wangan and Jagalingou people whose land rights will be infringed upon if it proceeds.

In October, Friends of the Earth's Pesticide Free Waterways campaign conducted a project researching pesticide detections in Victorian domestic water supplies over the past decade.


The final analysis revealed a total of 619 pesticide detections had been recorded by Victorian water authorities over the ten year period. Only one, a detection of the banned insecticide, Monocrotophos in December 2011, breached the Australian Drinking Water Guidelines. Of concern was the detection of pesticides through taps in the south east of Melbourne in 2014 and 2016. A copy of the report can be found here.


For more information on the on the Pesticide Free Waterways campaign contact Anthony Amis, [email protected] 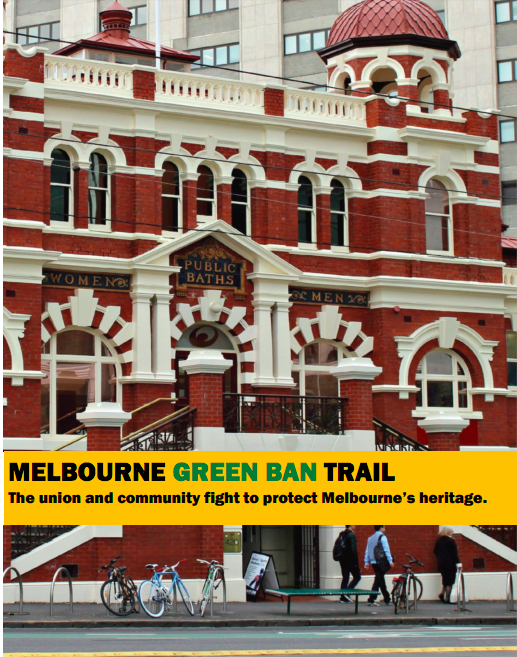 Trades Hall will be conducting the second instalment of what we hope will be a regular weekly Green Bans Trail. Organisers, Delegates and Activists from unions and other community organisations are welcome to attend.
For $10 per person comrades will visit and learn some of the history around the most significant Green Bans placed and held by the Builders Labourers Federation and other construction unions, through the 1970's in Melbourne.

Join us for our End of Year Party as we celebrate another epic year of campaigning and ring in the holiday season.

In early 2018 Ceres Global has 2 local journeys planned connecting with alternative, sustainable, and indigenous heritage, and our incredible natural environment.

In March the legendary ecologist, bushman and historian Don Butcher will be joining us to travel into the far west of Victoria on a journey connecting to ancient landscapes and the stories within them.

Later in 2018 (dates to be announced) we will again be joined by Don to spend 5 days in the forests and mountains around the Melbourne vicinity learning the story of our water.