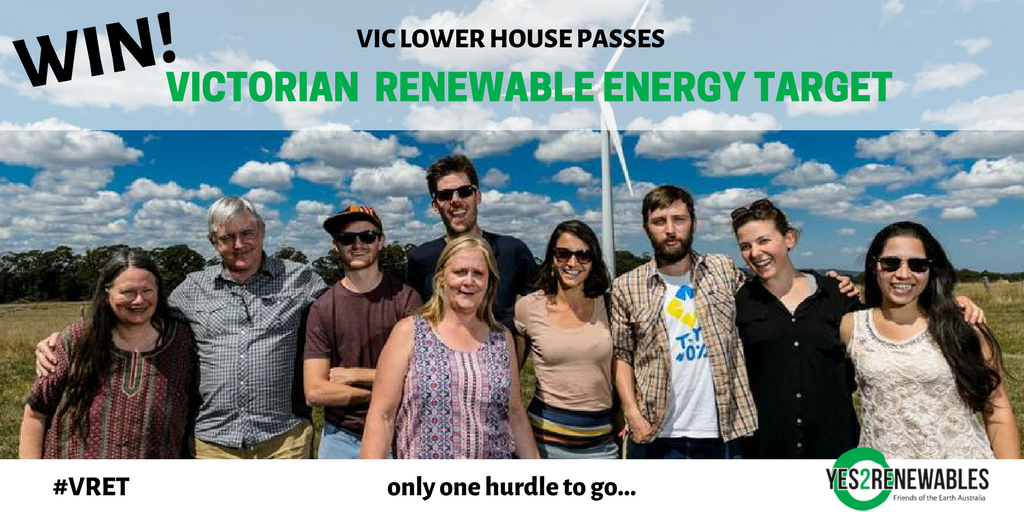 Friends of the Earth have welcomed the passage of the Renewable Energy Jobs & Investment Bill 2017 in the Victorian Parliament, saying the result brings Victoria a step closer to jobs, cheaper power, and action on climate change.

"This outcome is a big win for the community, the labour movement, business, and everyone hungry for action on climate change."

Legislation to enshrine Victorian Renewable Energy Targets of 25 percent by 2020 and 40 percent by 2025 into law won majority support in the legislative assembly. The scheme is expected to:

The Andrews government's bill passed the lower house with the support of Victorian Greens MPs Ellen Sandell and Sam Hibbins.

The Matthew Guy opposition stuck to its pledge to vote against the VRET despite strong support for renewables among Liberal party voters.

Donate now to advertise the benefits of the VRET, and how Opposition MPs voted in key seats to keep them honest

"In 2017, it's unacceptable for politicians to vote against policies to tackle climate change," said Leigh Ewbank, Friends of the Earth's climate change spokesperson.

"With deadly hurricanes in the Atlantic, unprecedented bleaching of the Great Barrier Reef, and parts of Victoria experiencing a record dry June, now's not the time to be blocking action on climate change."

The Renewable Energy Jobs & Investment Bill 2017 will now go the the legislative council for the final tick of approval.

Fiona Patten and James Purcell, Members of the Legislative Council who supported the passage of the Victorian Climate Change Act 2017 earlier this year, are expected to back the Victorian Renewable Energy Target in an upper house vote.

Friends of the Earth will be tracking the passage of the legislation closely.