Get on Track: People with disabilities demand an end to discriminatory public transport 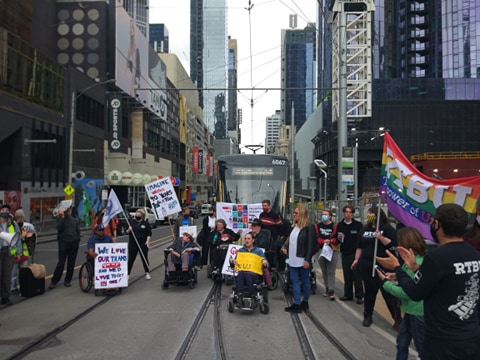 At 12 noon on Thursday 4 March the coalition of campaigners took to the streets from the State Library to call out for a public transport system that works for everyone.

Trams are an iconic part of Melbourne life and a symbol of our world-class city, but a recent report handed down by the Victorian Auditor General found that despite targets set for full accessibility by 2022, only 15% of services are accessible.

At the current rate of progress, the Melbourne tram system will not be fully accessible until 2066.

Despite efforts demanding action over the past 40 years, commuters are still waiting for action and investment to upgrade tram stops and purchase long overdue low floor trams.

The Disability Resources Centre has teamed up with the Rail Tram & Bus Union and Friends of the Earth to tighten the screws and demand urgent action.

Almost 20 per cent of Victorians have a disability. Seventy-one per cent of people with disabilities say that they don’t take public transport because of barriers to physical access.

However, the demographics impacted by inaccessible public transport are diverse and constitute over three million people: wheelchair users, people with mobility impairments, energy management conditions, temporary disabilities, those with situational impairments such as families travelling with prams, and many of our elders.

“Members of our community have been waiting to catch a tram for several decades. When 85% of services exclude people who require level access, it renders the whole network unavailable for them. Almost 20 years after the introduction of DSAPT we expect tram stop upgrades to be a higher priority for our state government.”

“The RTBU has continued to raise these issues and demand immediate targeted investment. Victoria’s aging tram fleet should have been replaced and expanded many years ago, but these setbacks must come to an end. As our organisations come together, we invite all Victorians to demand better – united we won’t be silenced.”

“We’re calling on the Andrews government to commit to a tram network that works for all Victorians. Ensuring everyone has access to sustainable public transport will be a key milestone in the fight for climate justice.”