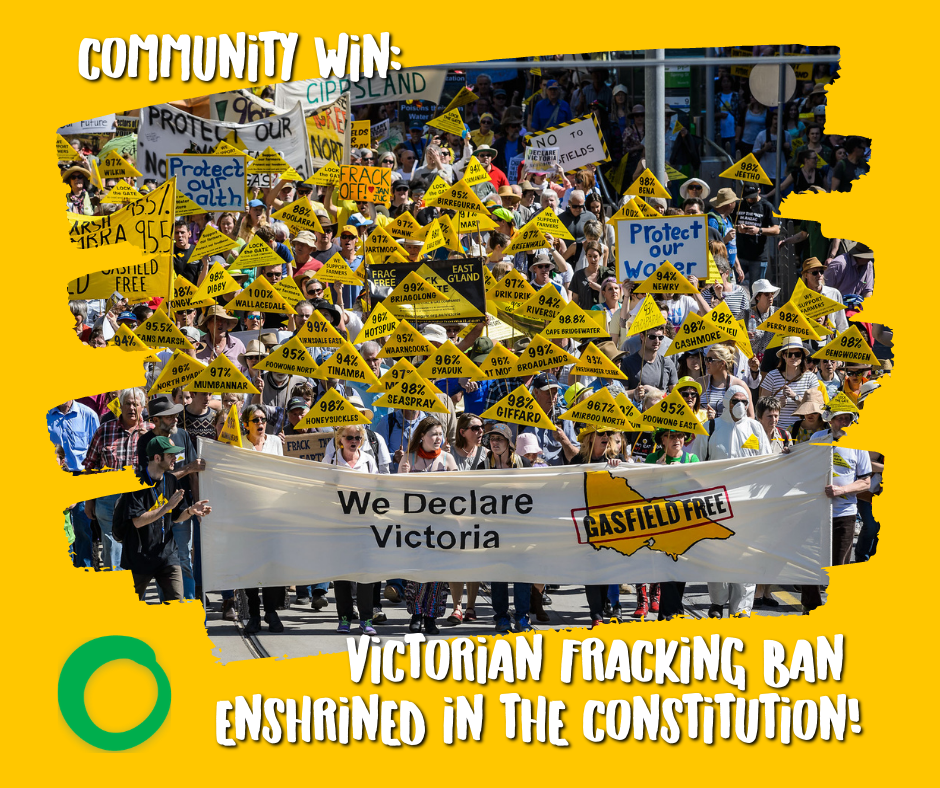 Testament to the strength of the community campaign to protect Victoria from fracking and unconventional gas, today the Andrews government’s bill to enshrine existing legislated bans on fracking and coal seam gas drilling into Victoria’s Constitution passed the upper house.

Friends of the Earth campaigned from 2011 until 2016 to help win the ban on fracking and unconventional gas drilling.

Friends of the Earth is delighted to see the ban enshrined in the state’s constitution and says the outcome is an acknowledgment of the powerful community campaign against gas:

“This was a campaign that was driven – and won – by regional communities. It is a reminder that strategic and determined community campaigning gets results,” said Cam Walker.

“This is the first permanent ban on fracking in the country and has provided inspiration to countless people around Australia and the world. It has protected our land and water, farms and landscapes, and stopped greenhouse gases from being released into the atmosphere.”

During the campaign, 75 regional communities declared themselves coal and gasfield free. Some 26 local councils expressed concerns about drilling. Tens of thousands of people across the state built political power that couldn’t be ignored in the leadup to the 2014 state election.

Following an inquiry process that saw an unprecedented number of submissions from the community, the Andrews ALP government committed to implementing a permanent ban on fracking. Today’s legislation is the final step in implementing this commitment.

For a summary of the campaign, please check here.

The Constitution Amendment (Fracking Ban) Bill 2020, which passed the Victorian Upper House today (4 March, 2021), fulfils the Andrew government’s 2018 election commitment to “enshrine our legislated ban on fracking in the Constitution of Victoria”.

Friends of the Earth say there’s still work to do when it comes to tackling the climate crisis and protecting Victoria’s farmland, beaches, and marine environments from new oil and gas development:

“And in recent times the government has ramped up its rhetoric that gas is a ‘transition’ fuel as we move towards a low carbon future.”

Please check here for further details on getting involved in these campaigns.