Farmland Not Gaslands is an empowering, short documentary that looks at the growing community movement against invasive unconventional gas projects planned for Gippsland and Western Victoria.

The inspiring stories of these rural communities and what they must fight to protect. The brave, united stance being taken by communities across the state as people from all walks of life stand together to fight to protect our water, our food security, farmland, human health and the environment.

It will be launched in Melbourne on Thursday Sept 11 and in Sale on Saturday September 13.

We are proud to announce the launch of this film as part of the Environmental Film Festival in Melbourne. There is also a premiere in Sale in Gippsland.

Melbourne. Thursday Sept 11 at the Kino.

You can book tickets for the Melbourne premiere here.

You can watch the Trailer here.

Vast areas of Victoria are covered in approved exploration licences for coal, coal seam gas, tight gas and shale gas. Over 350,000 hectares in Gippsland which covers some of the most productive farmland in the state, a thriving tourism industry and boosts an international image of being clean & green.

The other main concentration of approved licences in our state lay in Western Victoria, threatening our beautiful world renowned coastlines, a growing food producing industry and a crucial tourism sector that employs thousands. These licences cover an area of over a million hectares and stretch from the western suburbs of Geelong to the border of South Australia.

About the Seaspray farmers & locals featured in the film

Trevor & Di Flint are mixed farmers in Seaspray. Trevor’s family have been in the area for 170 years. He is a passionate man who loves his farm, his family and his community.

Tracey is a Beef Farmer in Seaspray and neighbours to Trevor & Di. Tracey has carried on the tradition of farming after her father passed away, and lives on the farm with her young daughter.

Julie & David Boulton are Seaspray Dairy Farmers. Like most farmers in Seaspray, they are hard working and committed farmers, concerned about the future of their farm should gas mining go ahead in their area.

Kirra lives with her parents Julie & David on their dairy farm and grew up in Seaspray. She is also a local primary school teacher and is concerned about the welfare of the children she teaches should the proposed gas wells get the green light.

About the other people featured in the film

Cam Walker is Friends of the Earth (FoE) Australia’s campaigns coordinator and has been active on environment and climate justice issues for more than 20 years. Cam is currently working with communities on the issue of onshore unconventional gas and new coal proposals.

Annie Kia currently works for Lock The Gate to empower communities threatened by invasive gasfields and coal expansion. Annie worked with others in NSW’s Northern Rivers to develop the Gasfield Free Community strategy. The initiative has been utilised and developed by community groups around Australia and the UK. Annie Kia has a strong belief in the power of communities to determine their futures through grassroots participation.

Drew Hutton is a veteran environmental campaigner, academic, author and past political candidate. He is a spokesperson for Friends of the Earth and the president & founder of Lock the Gate Alliance.

“My story is of an ordinary Australian who loves this country, doesn’t want to see it ripped up for short tern gain for a few, and is prepared to stand up to those bullies who want to force us into that future. Fortunately, I’m not alone”

“When our leaders fail us, then ordinary people have got to become heroes”.

John Fenton is a farmer from Pavillion Wyoming who has been living with pollution of ground water and air pollution, land use and other effects of the gas industry.  John and his wife Catherine have 24 gas wells on their farm.

In 2010 the EPA warned Pavillion residents not to drink the water and use a fan when bathing or washing clothes to avoid the risk of explosion, after it found the water contaminated with dangerous chemicals and methane caused by fracking for gas.

The gas company, EnCana, now trucks in drinking water for local farmers even though they refuse to admit liability. Some residents eat from paper plates because they cannot wash dishes without contamination, and they must open their windows when they have a shower.  The water flowing out of the bores and taps smells like diesel and can be lit if contained in a jar. Several people in the district have developed neuropathy or other health ailments.  Animals in the area have also become sick.

Pennie Brown, has worked on some of Australia’s highest rating TV Drama’s including Winners & Losers and City Homicide and is currently working as the Associate Producer on Wentworth.

In 2013 Pennie produced Gippsland is Precious, a documentary on Coal Seam Gas mining in Victoria, gaining national media attention on channel 10's The Project and ABC radio. Pennie’s follow up anti CSG documentary is called Farmland Not Gaslands. Pennie’s parents and extended family lives in Gippsland, so this issue strikes a personal chord with her.

AFI award winning actress, Nadine Garner, has worked extensively in film, theatre and TV (both in Australia and the UK). Nadine has appeared in hit TV series such as The Doctor Blake Mysteries, City Homicide, It’s a Date and The Secret Life of Us. Films have included Metal Skin, Mull, Razzle Dazzle, The Wedding Party and The Book of Revelation. A wife and mother, it was Nadine’s social and environmental conscience that lead her to be part of this project.

Dani Capron is both a theatre and film music composer from Gippsland. Being an active community member, and working in the social/welfare industry, issues facing health and sustainability are important to him; particularly when they're in his own backyard.

Savva Tsekmes is a motion graphics designer located in Melbourne Victoria. His creative focus is drawn to three particular areas; 3D animation/modelling, post-production and motion graphics. Using his creativity and talents he would like to see positive change in the world, moving away from fossil fuel and towards renewable energies is among one of his hopes for a more sustainable future. 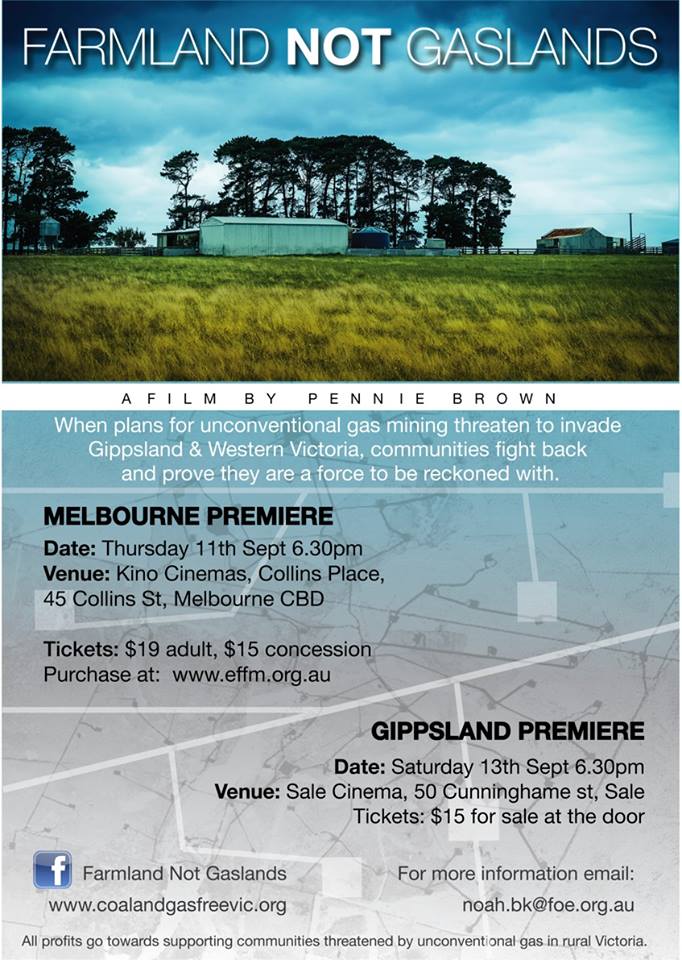