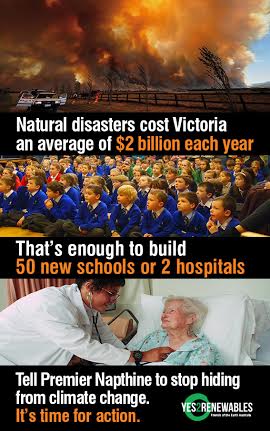 A research report released today by environment group Friends of the Earth shows that the financial cost to governments and the community in Victoria from natural disasters was $19.937 billion dollars over a ten year period from 2003 to 2013.

The report Natural Disasters and a Warming Climate; Understanding the Cumulative Financial Impacts on Victoria is a compilation of loss statistics from weather related Victorian disaster events – fires, floods, storms and heatwaves. The figures of $6,762.87 million in public costs and $13,174.2 million in insured costs are based on estimates of loss cost rather than true cost. Disaster cost estimates in Australia are largely drawn from insurance data or insurance data with some augmentation; they are therefore a limited proxy for true costs.

“Climate change science clearly tells us that, without concerted global action to reduce emissions, Victoria will face hotter summers and extended heatwaves, more erratic rainfall patterns, and longer bushfire seasons” said Friends of the Earth campaigns co-ordinator Cam Walker. “We note the Climate Council statement that all extreme weather events are now being influenced by climate change because they are occurring in a climate system that is hotter and moister than it was 50 years ago".

“It is clear that there are already considerable economic impacts of climate change that are being felt across the state. These costs are directly competing with other demands, such as education and health budgets. What this report seeks to highlight is the fact that the government is ‘flying blind’ when it comes to tracking the economic and social costs of natural disasters on our state. There is no single tally of the costs of extreme weather events, and so it is up to the media to report each event as they occur. A forward thinking state government would compile the full costs, making them public on an annual basis, and task the Premier’s office with co-ordinating the state-wide response to tackling climate change and advancing the state’s climate adaptation plans.”

“As Victoria suffered under the recent heat wave, limitations in the ‘surge capacity’ of our medical system were apparent. Health professionals have called on the government to urgently review how the state manages heatwave response. While bushfires have caused the greatest financial impact on Victoria over the past decade, heatwaves have been the largely unacknowledged killer in our state. According to a Monash University study, more than 200 people died as a result of the 2009 heat wave”.

“Our state government has walked away from meaningful action to reduce greenhouse pollution, including dismantling the emission reductions target in the Victorian Climate Change Act. It has retreated to a position where it has opted for an adaptation response rather than a serious mitigation strategy, and it’s Adaptation Plan has been criticised as being insufficient to task.”

“What this report highlights is the fact that natural disasters are a major drain on public and private funds, with total known costs over 10 years of natural disaster events in Victoria being:

See below for a full breakdown of costs.

“Unless our government stops hiding from climate science, and joins the global efforts to reduce greenhouse gas emissions, it will be condemning Victorians to an ever greater cost burden from extreme weather events.”

The report was written by RMIT student Tom Delbridge.