In attendance at the event was the Mayor and Deputy Mayor of Wyndham, multiple councillors and 11 candidates of this year's state election. But the ALP was nowhere to be seen...

On Wednesday October 12th, Our Sustainable Cities collective teamed up with local Wyndham activists from Point Cook Action Group to host a community forum highlighting the communities concerns surrounding the broken bus network in the West. 40-50 people ventured out into the rainy weather to join the important discussion, and hear what the candidates plan to do to transform buses in the West if they are elected this year.

You can watch the livestream here, or keep reading for a summary of the night and some excellent photos (Credit: David Mullins Photography)

Our first speaker of the night was Cr Peter Maynard, Mayor of Wyndham City Council and former bus driver! He spoke of the huge population growth that Wyndham is experiencing, from a population of 48,000 when he first moved there a few decades ago, to now over 315,000! The area is expected to be home to more than 500,000 people by 2040!
Cr Maynard publicly advocated for the Better Buses campaign saying that Wyndham's buses needed more frequency, longer hours and regular network reviews to match growth rates. More than 60% of Wyndham's workers leave the area for work, and buses aren't adequate to get people there. This means clogged roads and poor access to jobs for those who are unable to drive. 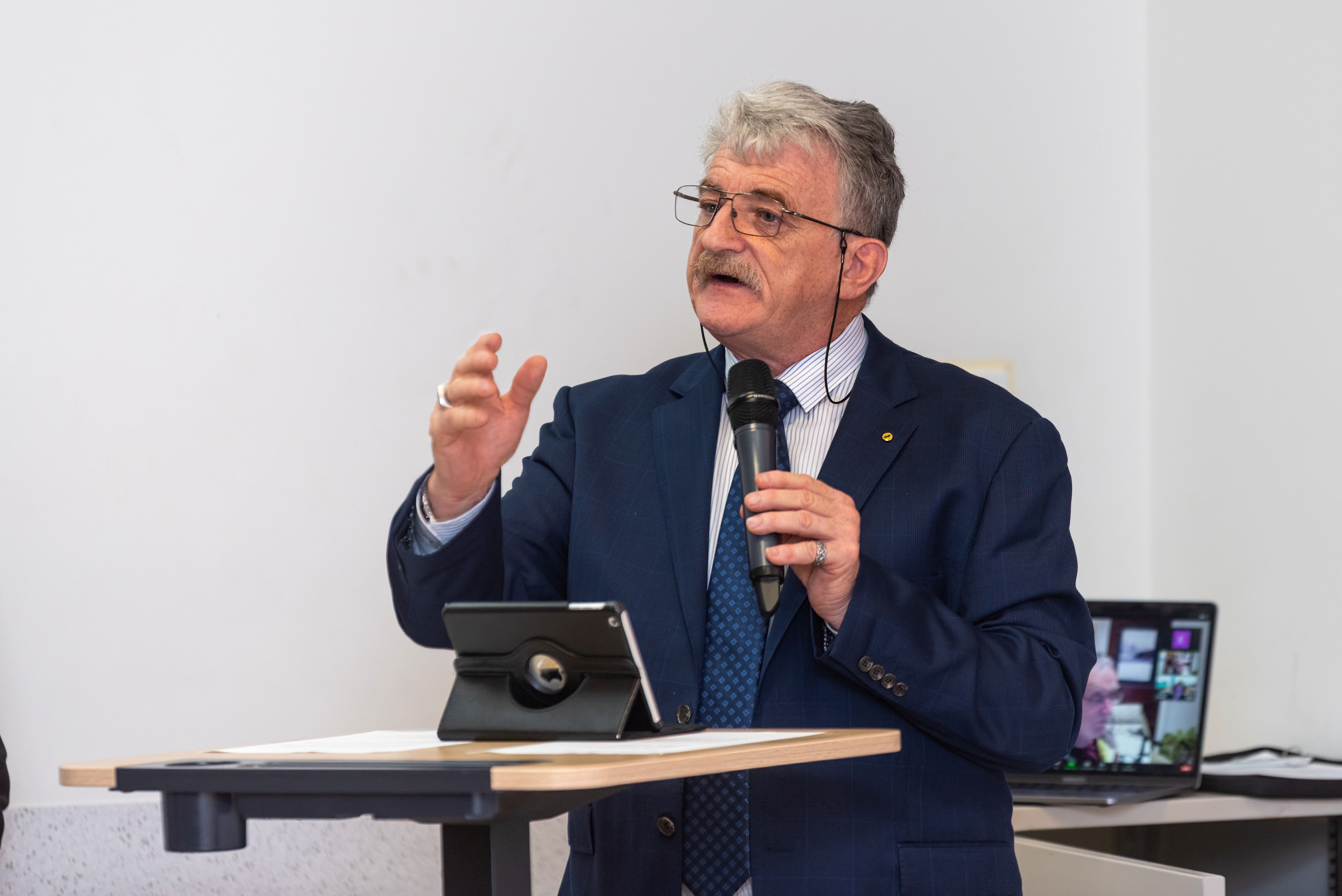 Next up we heard from Senthill Sundaram from Point Cook Action Group and Wynbus. He explained the need for flexible minibus shuttle services as part of the solution to addressing transport accessibility. Wynbus ran a successful trial earlier this year that allowed elderly residents, folks living with a disability and others to get around the community, filling the gap left by the State government. Point Cook Action Group have been campaigning to improve Wyndham's bus network for a long time now and are hoping to finally see some improvement! 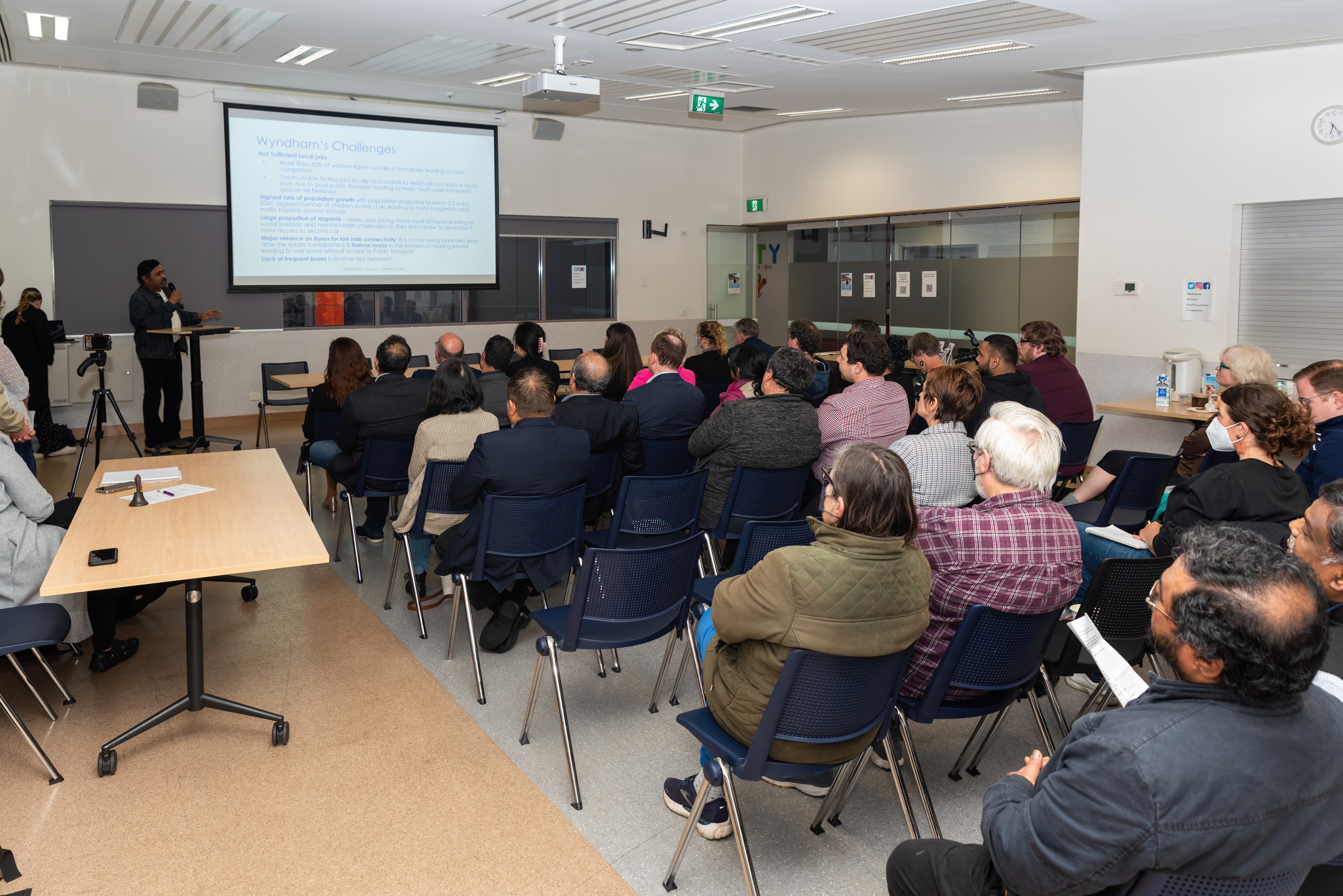 Our third speaker joined us via zoom. Dr. John Stone from the University of Melbourne who co-wrote the 'Better Buses for Melbourne's West' research paper alongside Iain Lawrie, said that is it heartbreaking that lack of access to public transport cuts people in the West off from the rest of the city. However there is an easy solution that could be applied in the next term of government - it's about using our existing buses and drivers more effectively! His research shows that if we transform the network to a clean grid it would allow for 10 minute frequencies, all day, every day. John also stated the we need electric buses both for the environment in reducing fossil fuel consumption, but as a way to change people's attitudes towards buses, to show that we can have something new and useful. It is a simple message, and politicians need to know that this is something that the community wants! 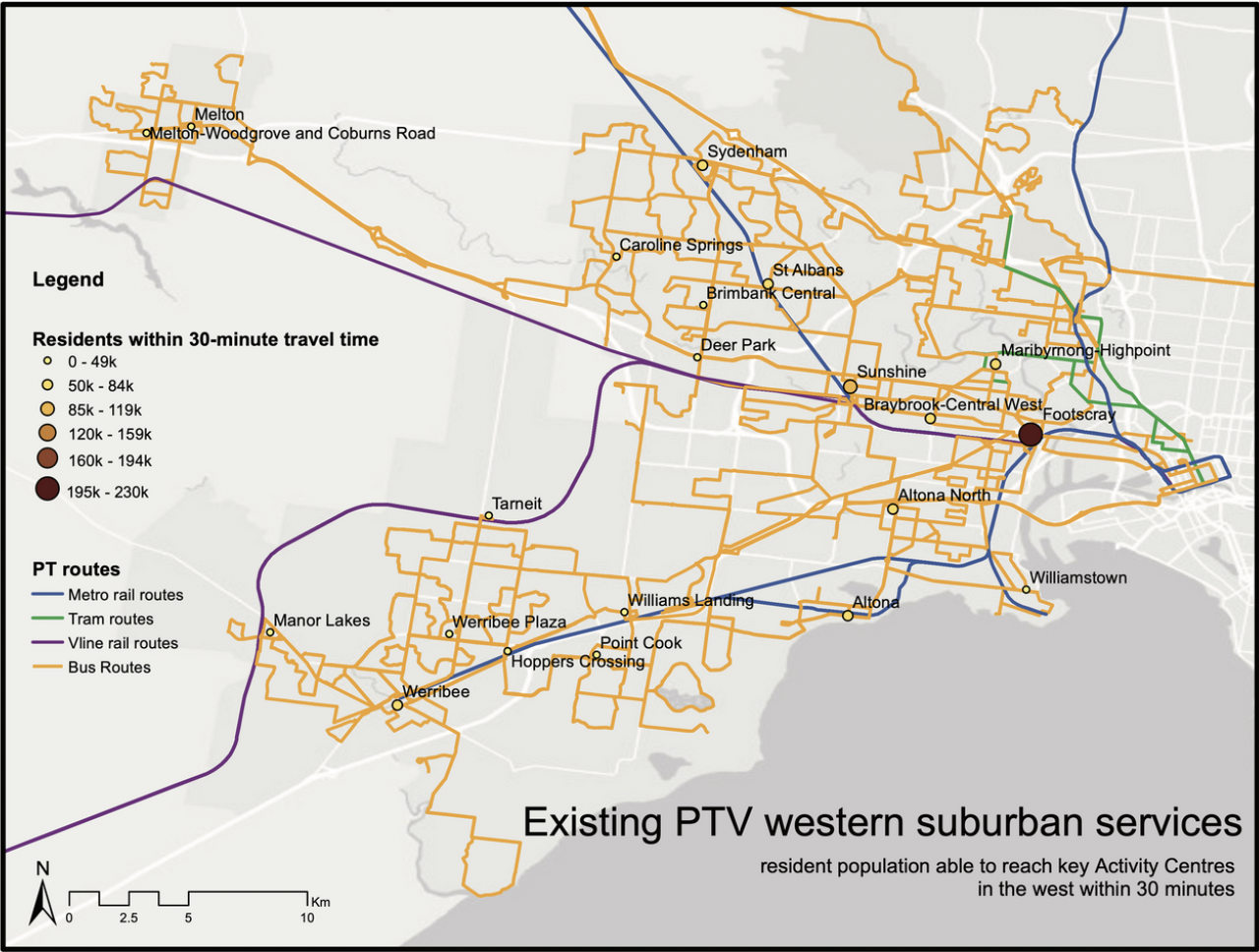 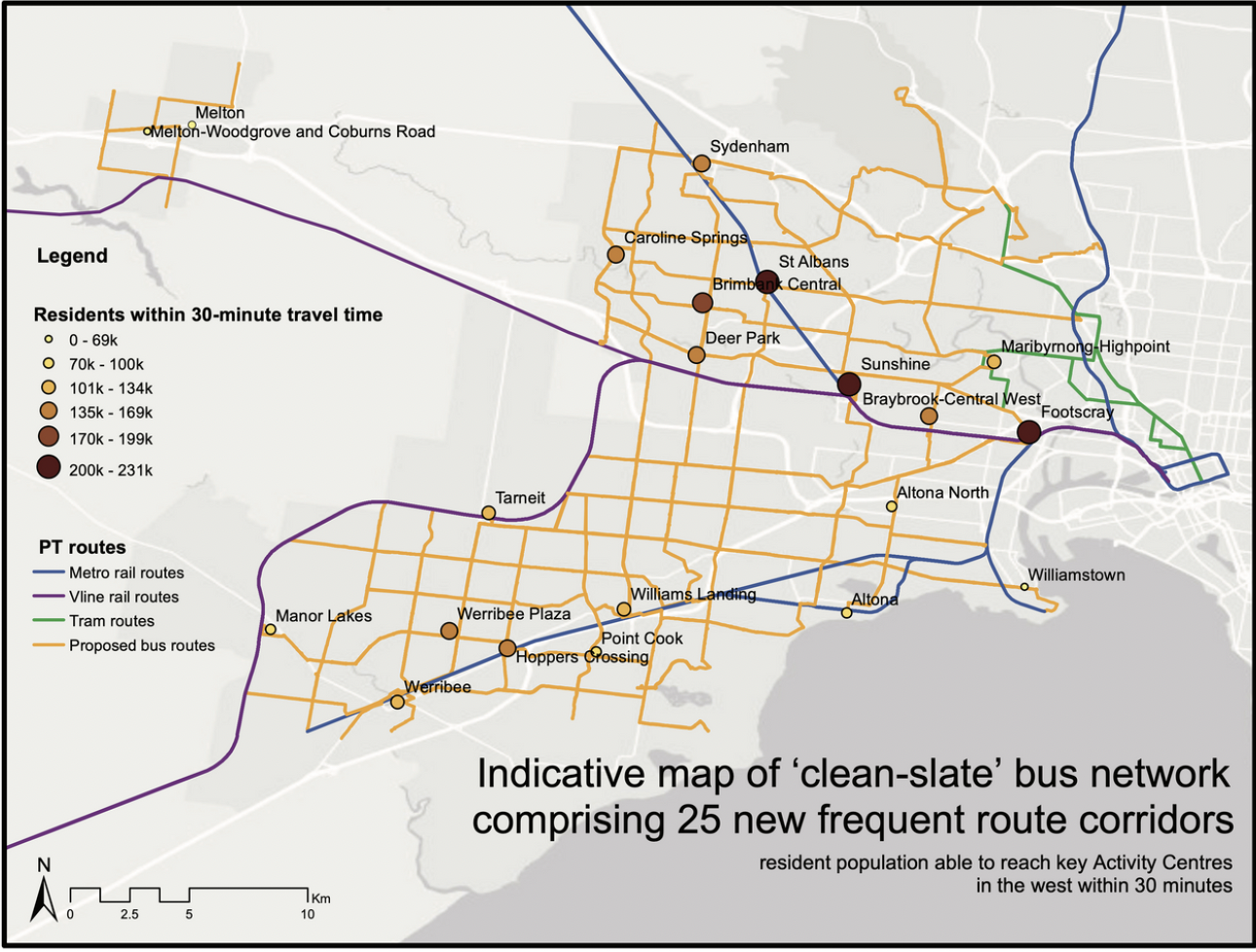 Our next speaker of the night was Tricia Malowney, Chief accessibility advocate to the Department of Transport, who also joined us via zoom. Tricia highlighted that we need people with disability in the room, as part of the decision making process, as the saying goes "Nothing about us without us." Tricia is an advocate and wants to hear people's stories so she can make sure that their voices are heard. 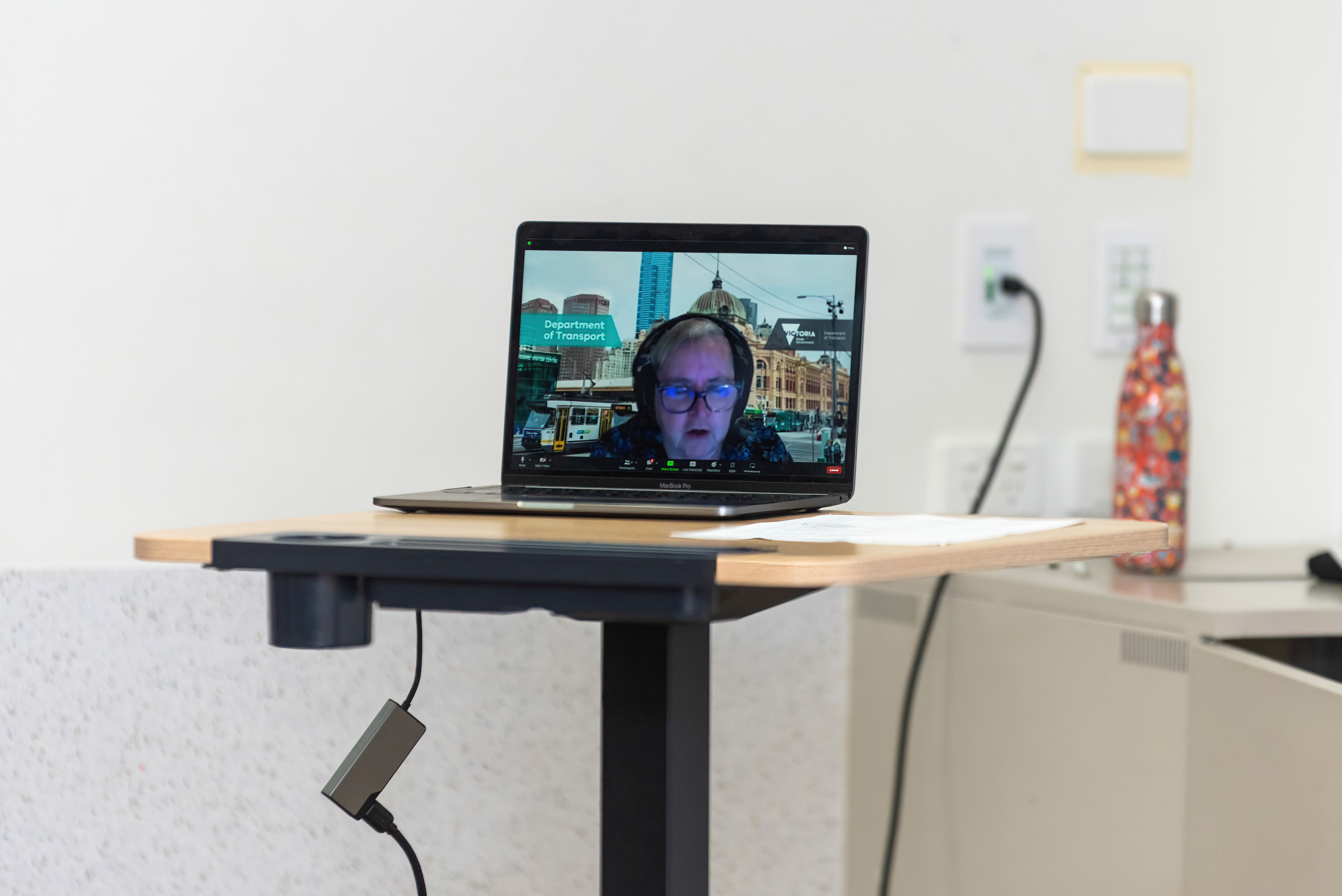 Our final speaker from the community perspective was Iqbal Hossain, High-school teacher and member of the Victorian Bangladeshi Community Foundation who lives in Hoppers Crossing. He told us how although there is a bus stop right outside his doorstep, the route is so indirect that it takes twice as long to get places as it does to drive, so he and his family normally have to drive to the station and park there, where carparks are full by 7am. As a teacher, Iqbal has heard stories from students who have lost their jobs or been late to school due to buses being unreliable! A friend of his recently had to pay $40 for an Uber across town because the gap between buses was so big. This is not sustainable for communities who are already struggling with the rising cost of living. 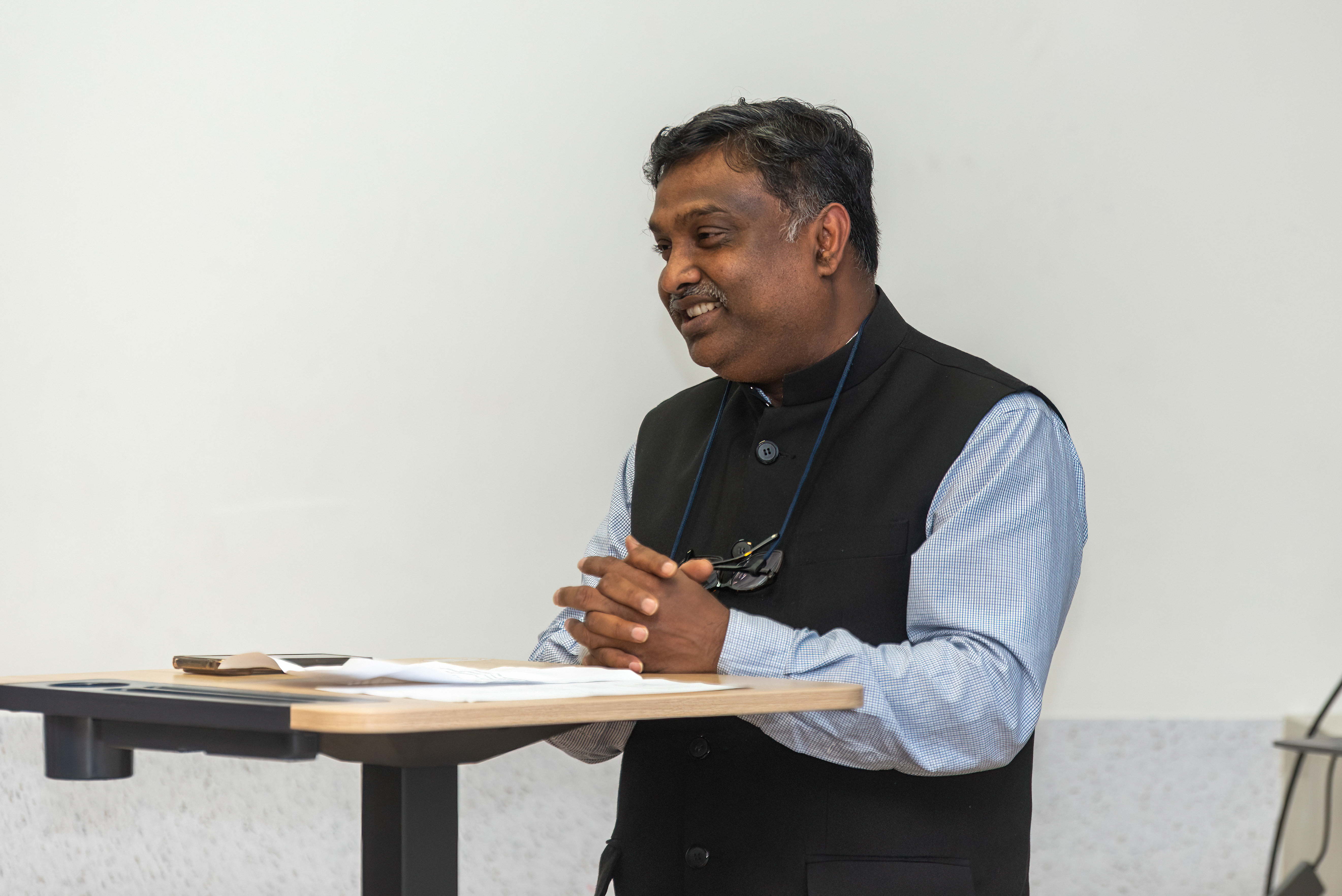 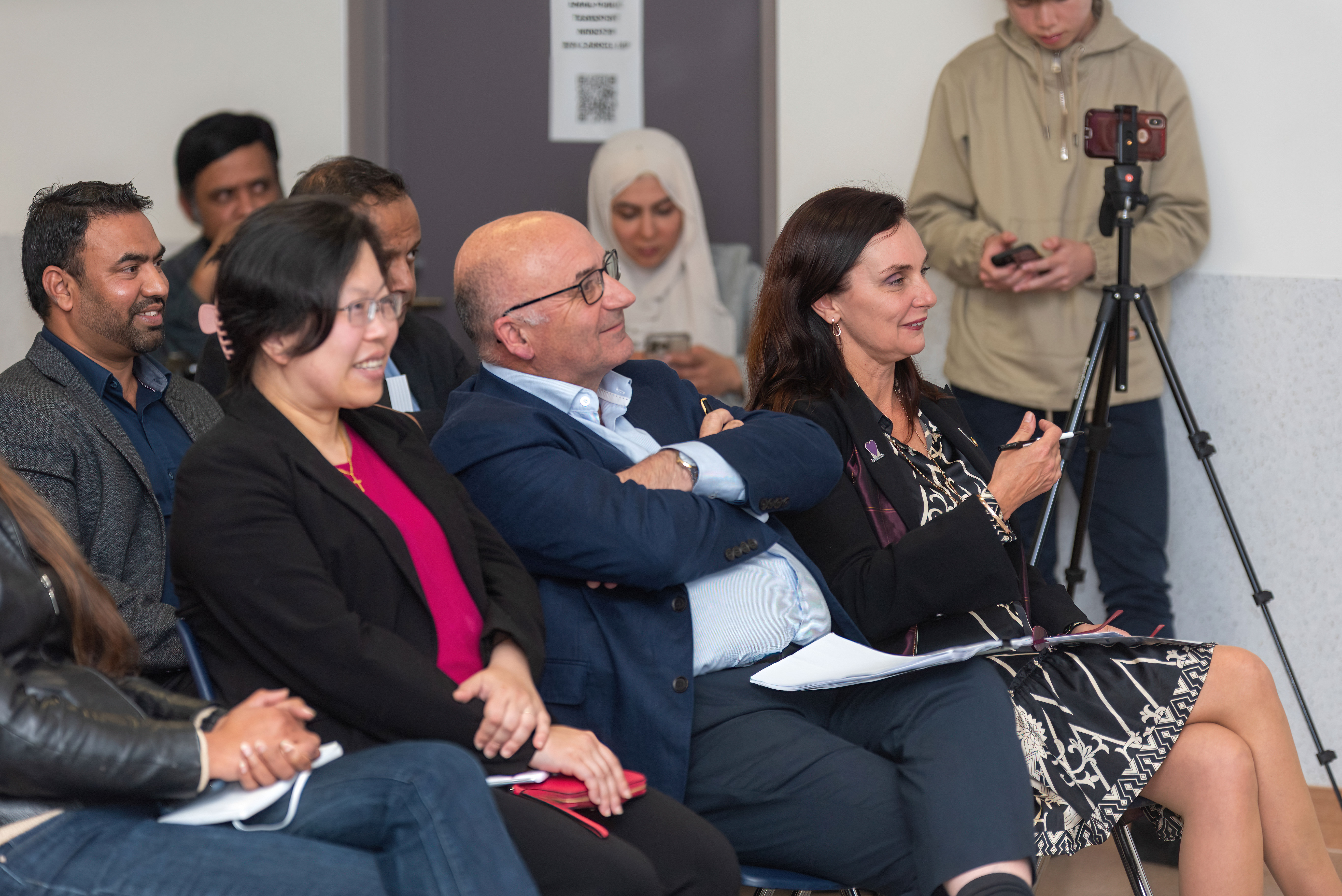 For the second half of the night we had a panel of 8 candidates (yep, huge panel!) who were given 5 minutes to provide an overview of their policy priorities, and then respond to questions from the audience.

Preet Singh, Liberal candidate for Tarneit went first as he had to leave early to attend another event. He said he sees parents having to drive their kids everywhere because there is no bus. He has seen people waiting for the bus in the wind, rain and harsh sun, completely unprotected. He doesn't expect a train station to be built tomorrow, whereas buses can be rolled out quickly! At the moment buses are infrequent and there are are some estates with no bus service at all. Mr Singh said that the Liberal party wants the community to use public transport, and that they shouldn't need 2-3 cars per household, and that the Liberal's $2 a day PT plan will help activate this.

One audience member questioned whether the Liberal party would commit to increasing routes from every 20 minutes to every 10, but he said that although he would like this, the Liberals would not be able to commit. 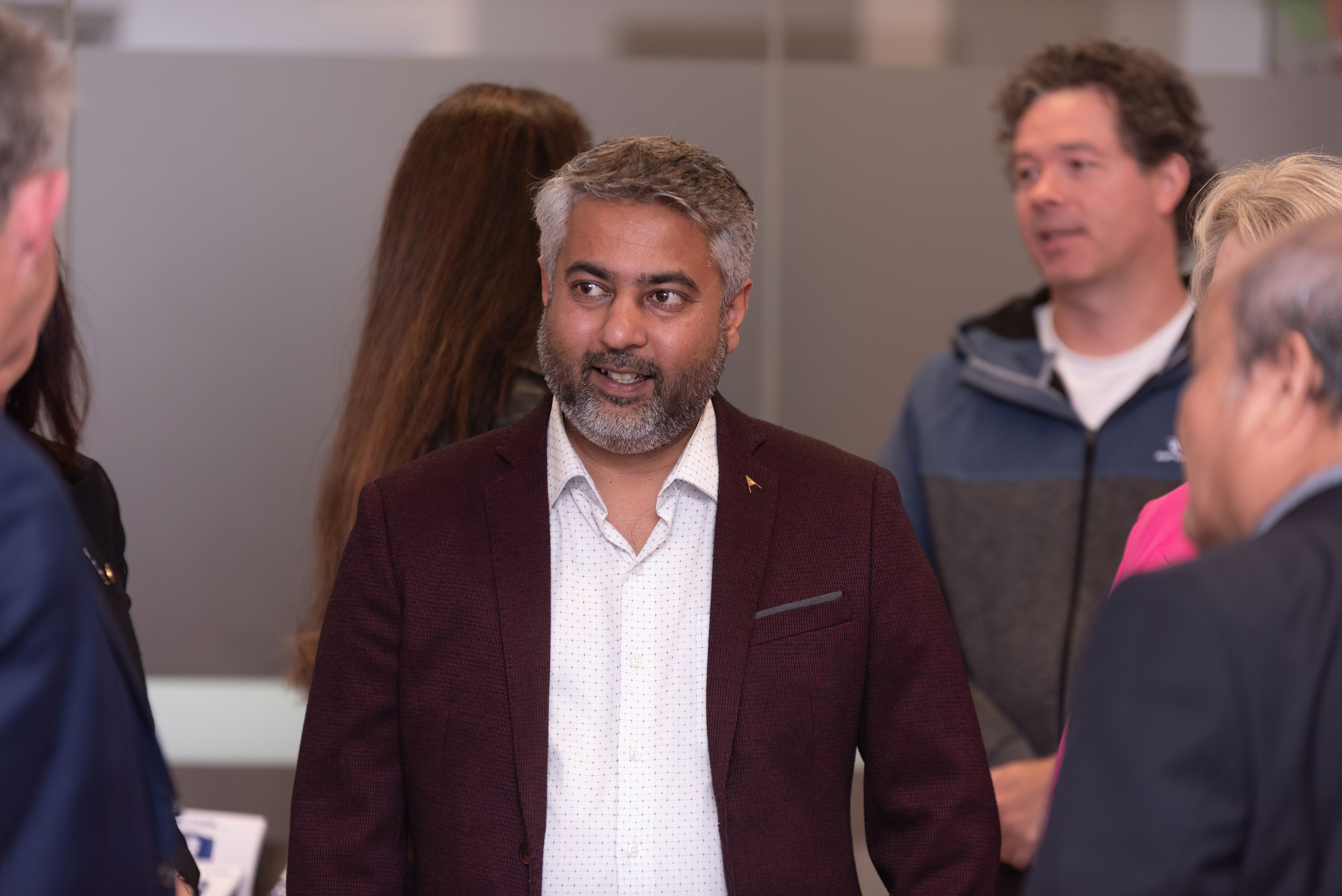 Independent Candidates for Point Cook Shwetali Sawant and Dr. Joe Garra, and Independent candidate for Tarneit Aijaz Moinuddin all support the Better Buses campaign as well, and would like to see increased frequencies and better connection to other form of public transport.
Dr. Garra said that after driving you are grumpy and stressed, and thinks that if we had better buses that have reliable service it would allow people to relax more, benefiting both mental and physical health for bus users. 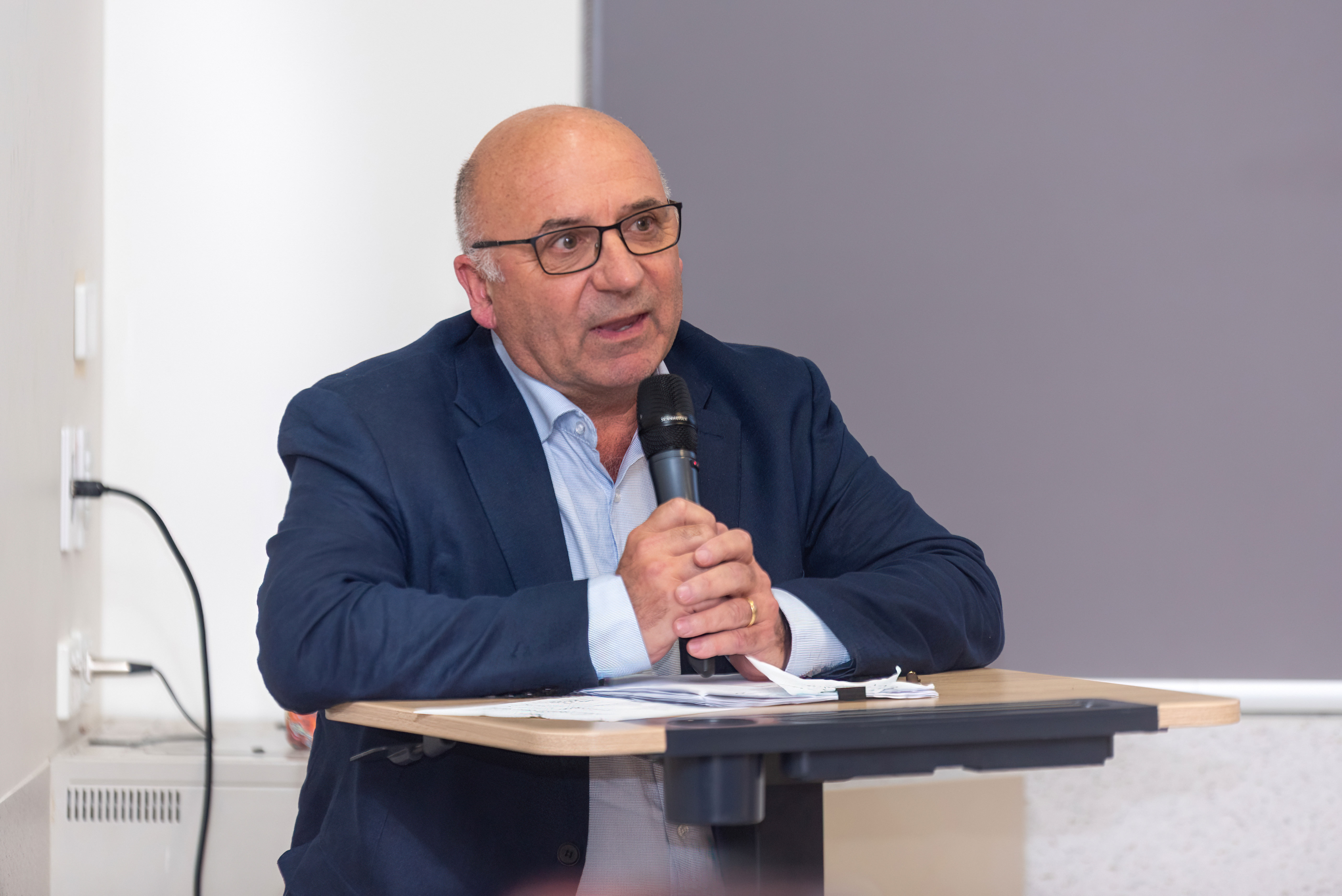 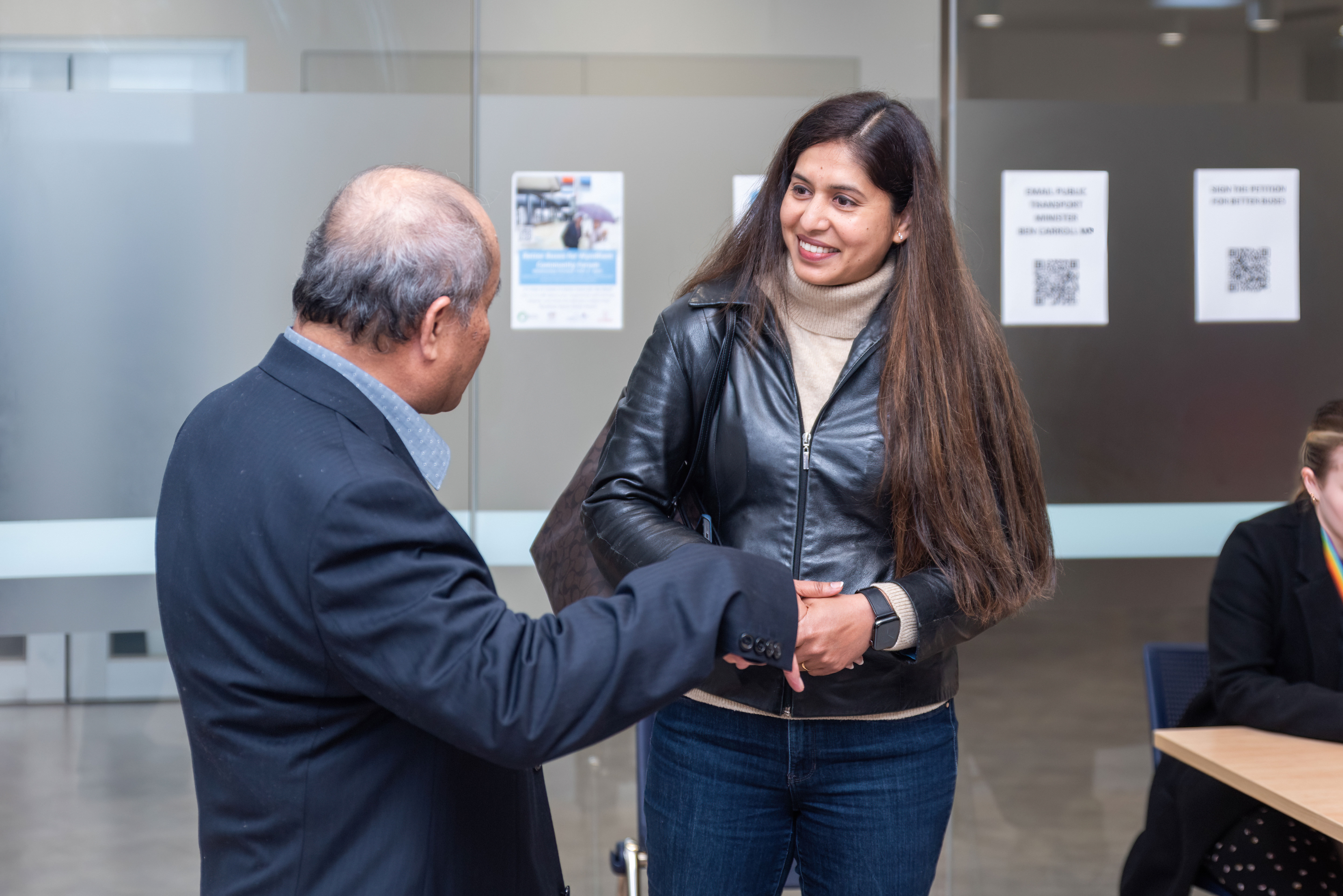 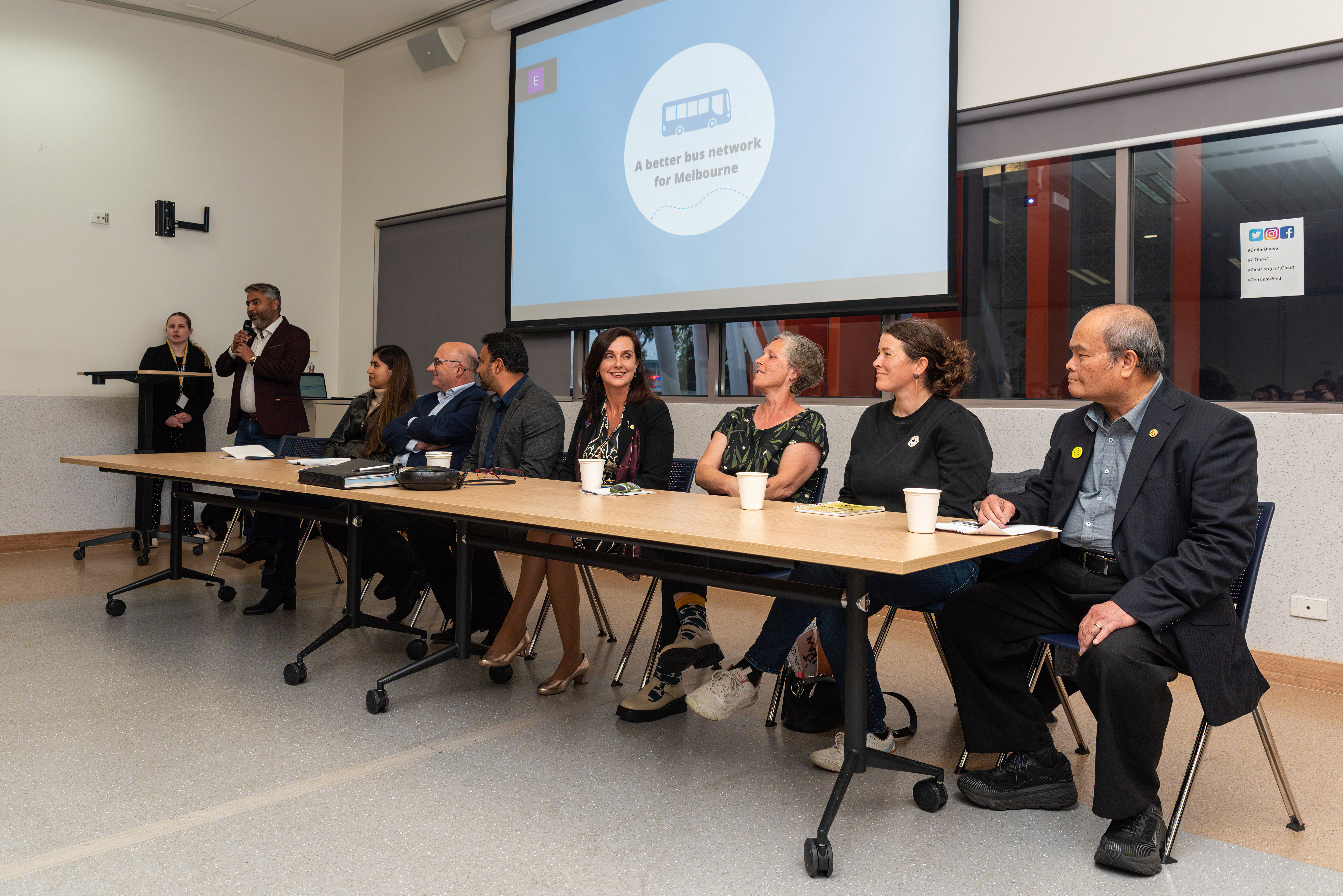 Up next was Greens candidate for Western Metropolitan Bernadette Thomas, who highlighted the Greens plan to provide thousands of new buses powered by renewable energy, and thanked Tricia Malowney for emphasising the need for accessible PT. If good PT is provided, more people in the West will use it! Ms Thomas is highly supportive of Better Buses, and believes this is the logical answer to solving the PT problems in the West. 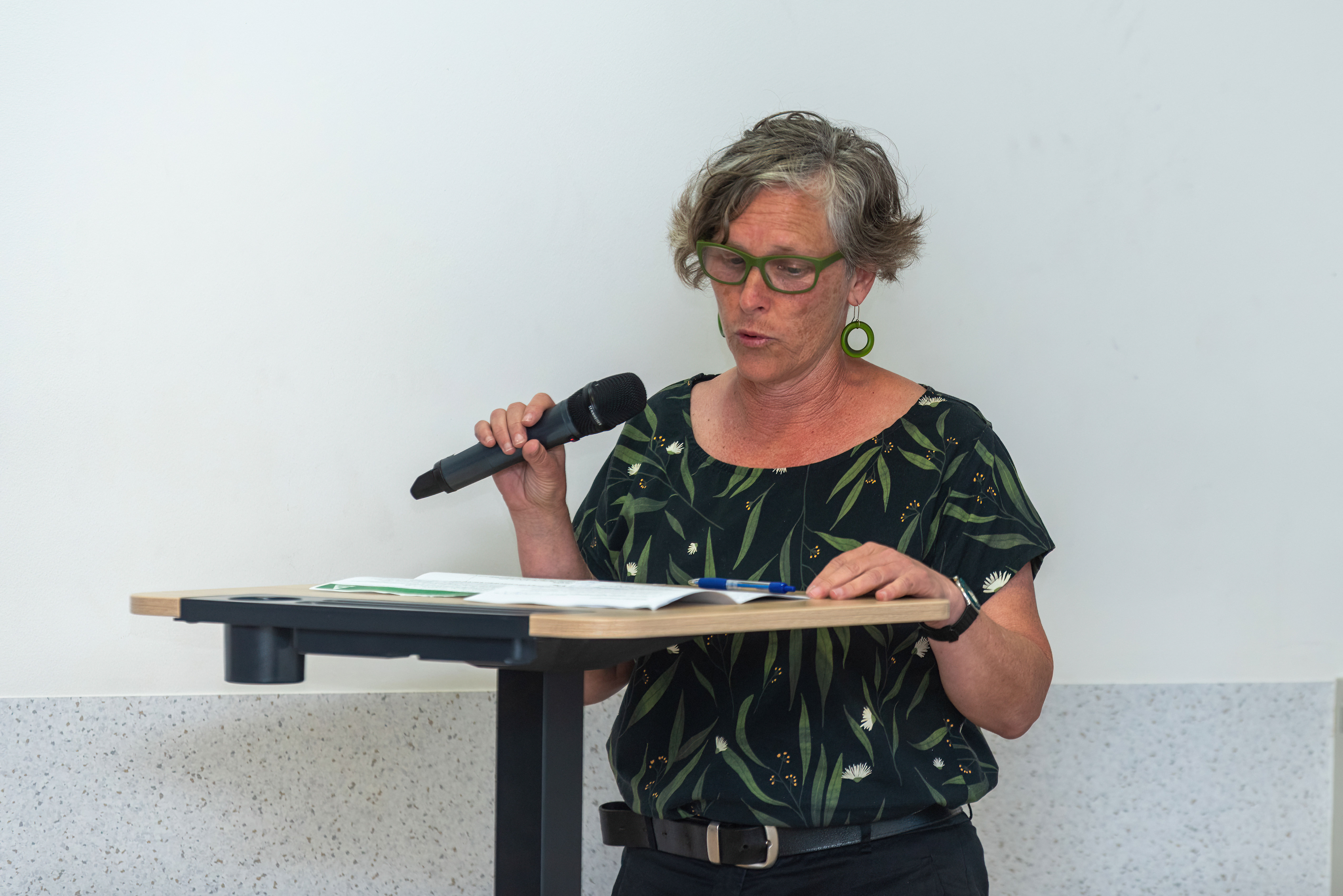 Next we heard from Liz Walsh, Victorian Socialists candidate for Western Metropolitan, who said that her party strongly supports the Better Buses campaign, as well as increased train stations and electrification of train lines in the West. She said that Vic Socialists believe that access to reliable, frequent and free public transport is a social right, not a 'nice to have' extra, and the lack of adequate transport seen in the West is a crime. This lack of investment in infrastructure is also seen in schools, health, community services and more. She said that it is not acceptable that so much of the PT network is inaccessible to people with disabilities, and that this is also about climate action, getting people out of their cars and onto PT will increase air quality and reduce fossil fuel consumption. Vic Socialists are against the privatisation of public services, and want to renationalise public transport. 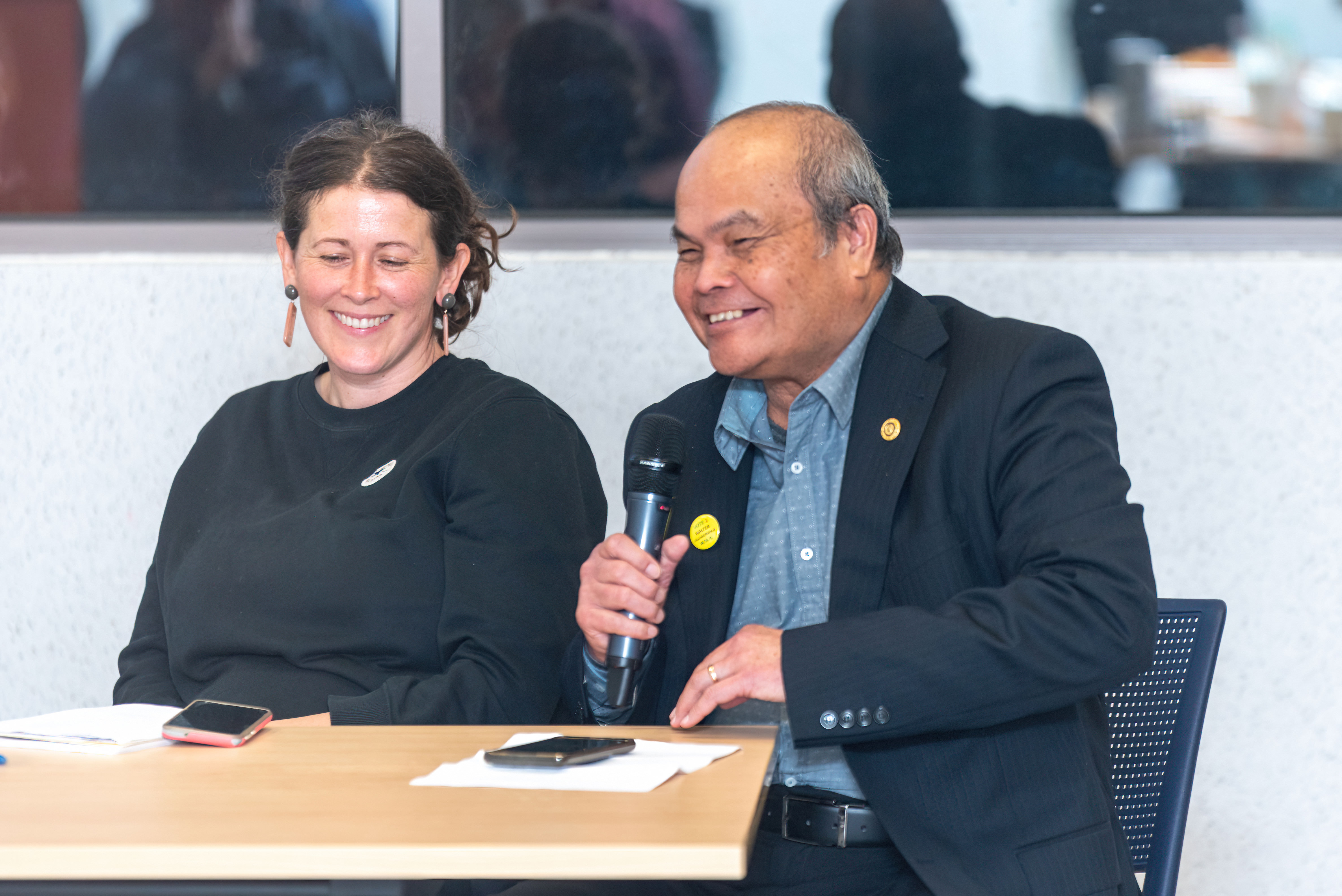 Lastly we heard from Independent candidate for Western Metropolitan, Walter Villagonzalo who has been an active member of the Wyndham community for several decades. During this time the population has increased dramatically, but public transport has gotten worse! He said that we will hear a lot from the government during this election period, but may not see the action. Mr Villagonzalo said we can't keep voting for career politicians if we want to get results! 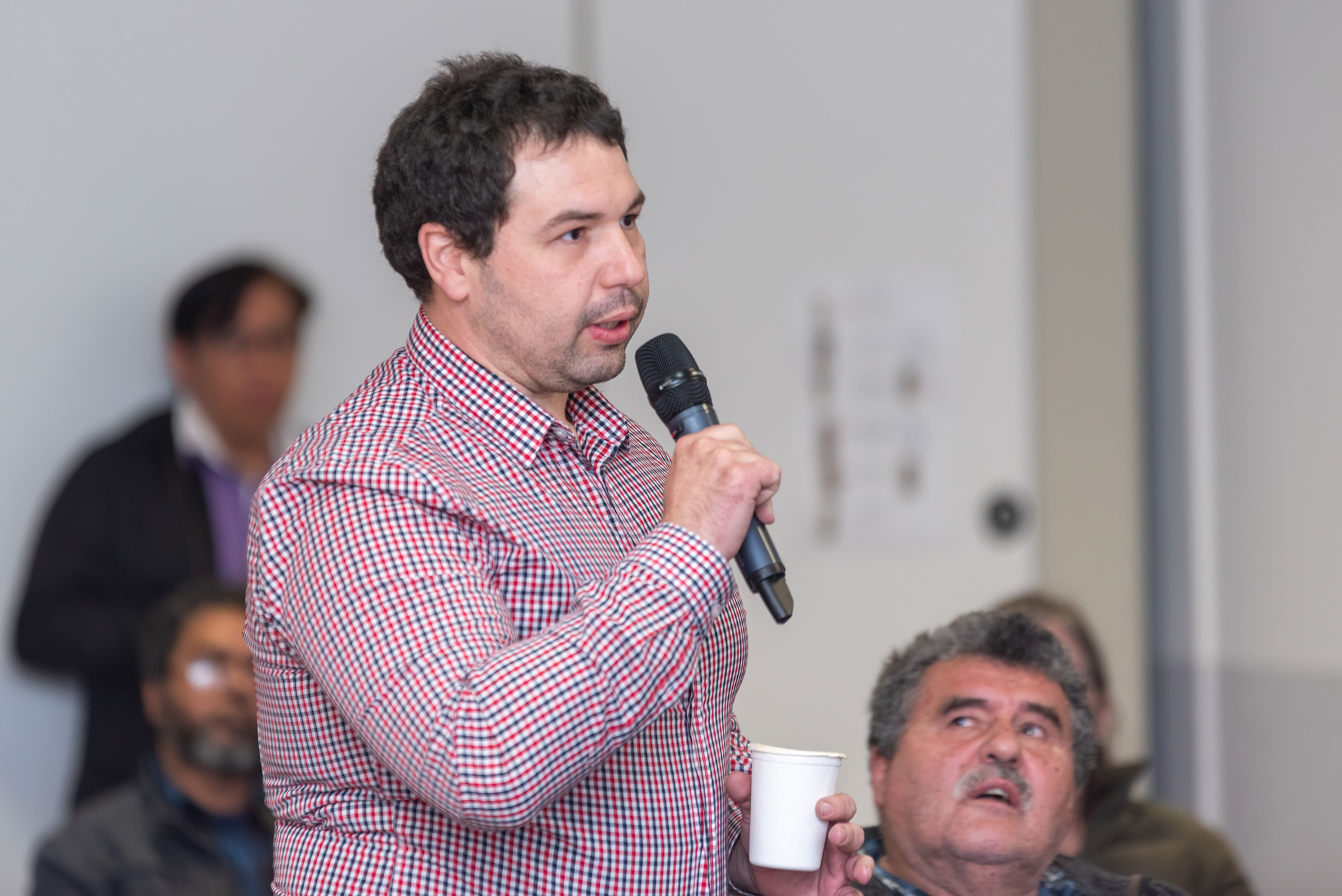 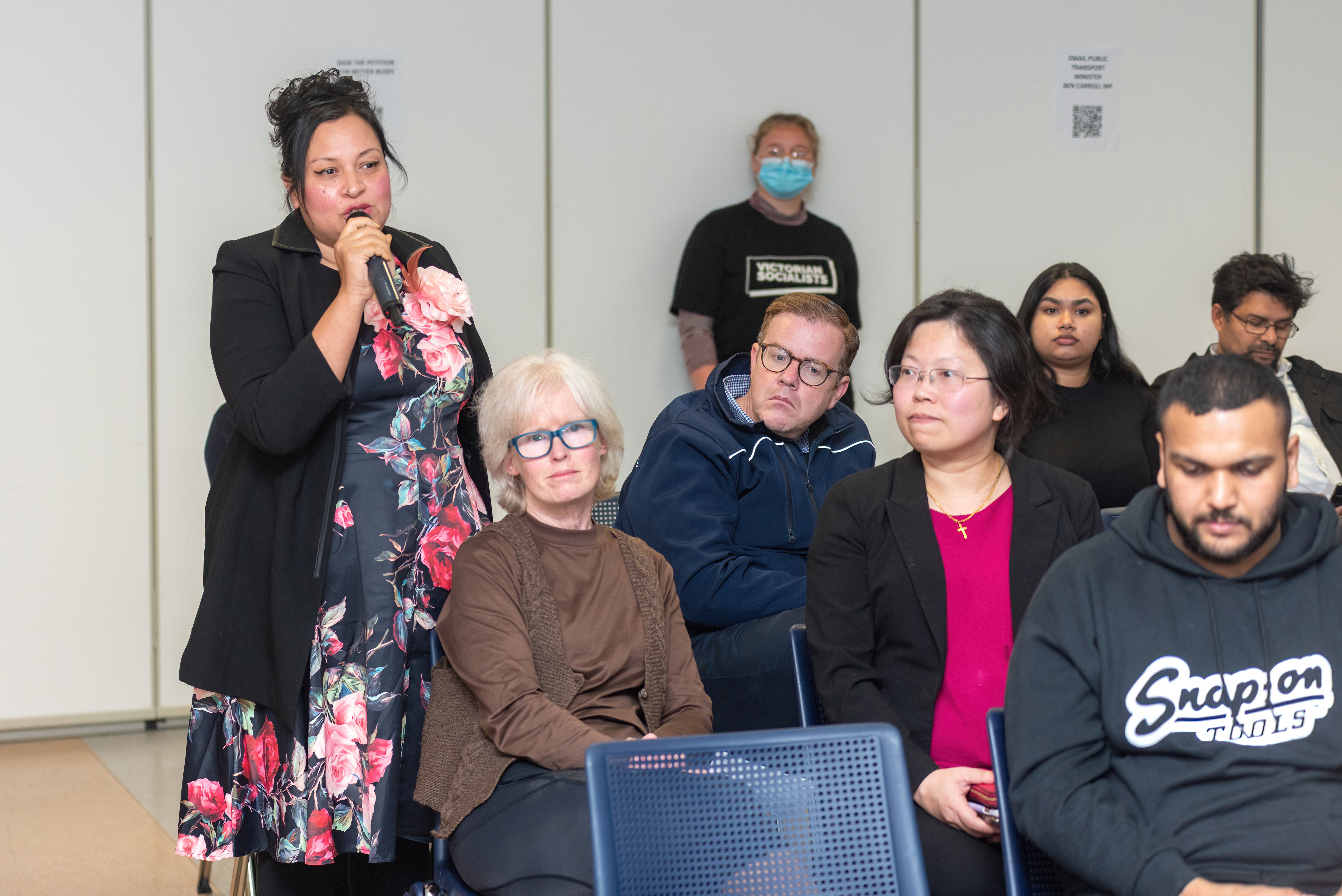 Next we heard questions from the audience.
The first question was "In addition to improving PT, how will you change the culture so people's first choice is walk, bike or PT, not the car?"
Answers included Liz Walsh saying that service needs to be improved to make PT more attractive, and other candidates said that it needs to be affordable.

The next question was a more specific one "How will my son get to basketball at the stadium if the grid bus won't go there, is on-demand the answer, or something else?". Bernadette Thomas answered that we need integrated land-use planning, so that things are in the right place, and that we can retrofit to make sure sporting and other community facilities are accessible to the community. Aijaz Moinuddin think that on-demand buses are the way to go, with real time data available.

The final question was from Nusrat, an engineer who works for the Department of Transport and was around how to increase PT patronage, considering that business cases for PT don't get funding due to lack of users. Walter Villagonzalo pointed to reducing cost, but said that this could create more problems if it means there is not enough money left to improve PT services. Dr. Joe Garra quoted the 1989 film 'Field of Dreams' saying "Build it and they will come".

We were thrilled to have so many candidates from across different parties show up to share their bus plans with the community, however the community were left disappointed that nobody from the Labor party showed up on the night.

There are 2 further opportunities for the ALP to show up for the community in the West. 'Transforming Transport in the West' will be held at W&M Couch Pavillion in Spotswood on Wednesday October 26th, and 'Better Buses for Brimbank' will be held at the STACC in St Albans on Wednesday November 2nd.. Will Labor show up and demonstrate their commitment to providing a fair go for the West? Time will tell...

Sustainable Cities would like to say a huge thank you to all who attended, both in person and online, and everyone who came together to make this event so powerful.

We thank Point Cook Action Group, especially Senthill and Benish, for organising this event with us, we couldn't have done it without you!

We would also like to thank the staff at Wyndham Council Melissa Falkenberg,  Ian MacGowan, Dean Ellis, Adem Saban and Holly Boyle.

Thank you to Tarneit Community Learning Centre for allowing us to host our event at your centre, and to your extremely helpful and friendly staff.

And finally a huge and warm thanks to Iqbal Hossain and friends from the VBCF for helping to set up, and providing the delicious food and drinks.

Finally, we would like to acknowledge that this event took place on Wurundjeri Country, on the lands of the Bunurong and Woi Wurrung people. We pay our respects to their elders, past and present, and to any First Nations people who attended the event. Sovereignty was never ceded, this always was and always will be Aboriginal land. ❤️💛🖤