Betrayal of farmers a bad move for Coalition 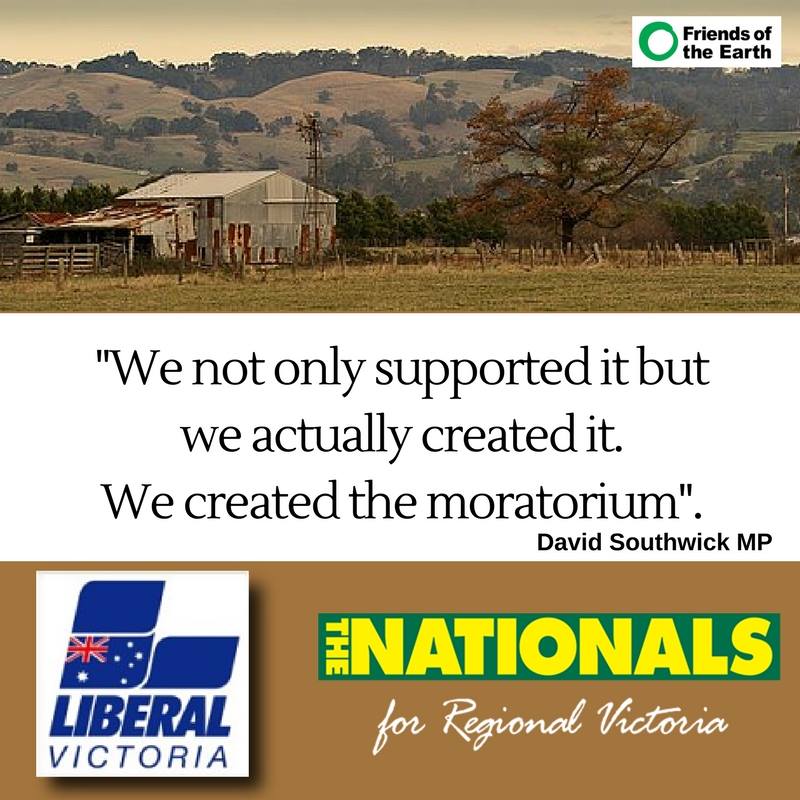 The announcement this morning that the Victorian Coalition will put forward an amendment which would see the moratorium on conventional gas drilling lifted has been met with anger from farming communities and environmental groups.

“The Coalition put the moratorium in place in 2012. It has constantly berated the ALP for changing it’s position on gas mining, yet has now performed a backflip of huge proportions” said Friends of the Earth (FoE) campaigner Ursula Alquier.

“The backflip by the Coalition, which would remove their support for the moratorium on onshore conventional gas, would be a betrayal of rural communities right across Victoria”.

Cam Walker, campaigns co-ordinator for FoE said “the Nationals know that there is deep concern in rural communities about both conventional and unconventional gas drilling. The proposed extension of the moratorium to 2020 will allow the government the time to gather the required information to know whether conventional gas drilling can co-exist with farming. If they choose to support this amendment, the Nationals will do so in the full knowledge that they are ignoring the concerns of the farming communities they keep saying they represent.”

“The five year gasfield free campaign that lead to the moratorium being established demonstrated that here is no social licence for onshore conventional gas mining in Victoria” said Mr Walker.

Ms Alquier continued: ”many farmers and rural communities have been reassured by the Coalition in recent weeks and months that they would not stand in the way of the Victorian fracking bill going through, and that they would support it with no amendments. Putting this amendment forward at the eleventh hour is a stab in the back to so many Victorians”.

Julie Boulton, a dairy farmer from Seaspray in Gippsland said "communities like ours have said time and time again over the past 5 + years that any form of onshore gas mining industry is not welcome here”.

“We have tirelessly talked to politicians from every party, and we trusted the Coalition, especially The Nationals, to listen to farmers, to listen to farming communities. So today's backflip is an absolute stab through the heart of regional Victoria. How dare they promise their support, look us in the eye time and time again and say we support you and then turn around and do this? The Coalition are a joke and have made it crystal clear today that they have no interest in standing up for the bush, all they care about is the trashing of our state and putting at risk our precious food and water security" concluded Ms Boulton.