Wins of the Nuclear Free Movement #2

A huge jump in the uranium price occurred in the mid-1970s, thanks to a cartel known as the Uranium Club. The cartel was exposed by Friends of the Earth (FoE). It was disbanded and out of court settlements resulted in some club members paying about $800 million in penalties. 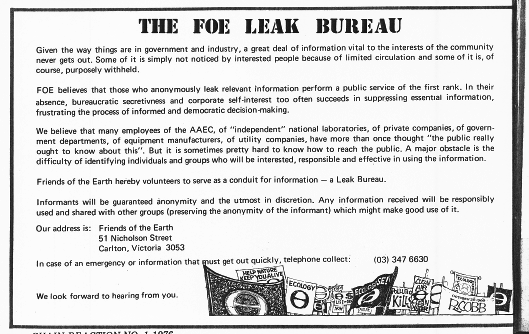 In the mid-1970s, FoE's magazine Chain Reaction carried appeals from FoE's 'Leak Bureau' asking corporate or governmental whistleblowers to provide information. As a result, FoE members were asked to come to a secret location in Sydney and were provided with a large box full of original files and documents leaked from Mary Kathleen Uranium Mining Pty Ltd.

The leaked files had evidence of: shoddy environmental practices; surveillance of environmental organisations; the close relationship between ACTU president Bob Hawke and the chair of Conzinc Riotinto Australia (CRA), Sir Roderick Carnegie; and the complicity of Australian government officials in providing advice to mining companies on how to avoid important nuclear non-proliferation safeguards treaties.

The files also revealed a uranium producers' group called the "Uranium Club". It consisted of the key Australian and other non-US uranium producers. The Club appeared to have been established with the primary aim of artificially increasing the price of uranium from about US$7 per pound to a lofty US$45−50 per pound from 1972 to 1974 in order to squeeze nuclear power producers and US uranium suppliers.

John Proud of Peko-Wallsend was co-ordinator of the Uranium Club at the March 1976 meeting of companies and government bureaucrats. The notes of that meeting finish with the statement: "Mr Proud stressed the need for extreme secrecy".

FoE planned to simultaneously release these documents around the world. One set of documents was immediately taken to the airport, to be hand-delivered to the Californian Energy Commission in San Francisco. The Commission was primed to pass on the documents to the US Justice Department and the US media.

In Australia, the cartel story was published in The National Times in August 1976, causing serious embarrassment to the government and the uranium cartel members that included RTZ, RioAlgom, CRA, Mary Kathleen Uranium Mining (the only company producing uranium in Australia at the time), Electrolytic Zinc, Peko-Wallsend, Pancontinental, Noranda Uranium Mining and Queensland Mines.

On August 30, once the Californian Energy Commission released the documents in San Francisco, the story broke internationally, and it was splashed across the front pages of major financial papers and dailies around the world over the next few days.

The scheduled Uranium Club meetings in New York were immediately cancelled. The US Justice Department had issued subpoenas for the company executives who were named in the documents and other members of the cartel to appear before a Grand Jury any time they set foot in US. Future meetings scheduled for Paris were also cancelled and the Uranium Club was disbanded. 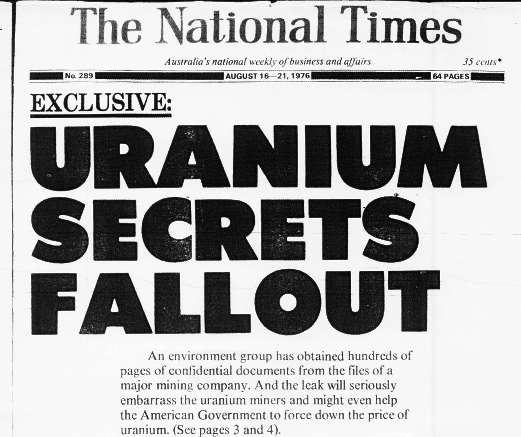 Litigation by Westinghouse and General Electric against the members of the cartel picked up momentum in the US courts and eventually flowed into Australian courts. The conservative Fraser government passed legislation in November 1976 – the Foreign Proceedings (Prohibition of Certain Evidence) Act 1976 – to prevent FoE or anyone else from providing any further documentary evidence against the uranium mining companies from Australia. The Act was described in a Chain Reaction editorial as "one of the most corrupt pieces of legislation to go on to the Australian statutes".

Westinghouse finally settled out of court with the uranium cartel participants for damages in excess of US$800 million to make up for its losses due to the artificially inflated price of uranium supplied over four years and some punitive damages for breaching the US Sherman Antitrust Act.

This is only the beginning of a much bigger story that ran on for many years into the mid-1980s and beyond. Many of the details are covered in books written by former Australian Trade Practices Commissioner George Venturini.