Discussions between traditional owners and government stakeholders have left cracks in dry soil. 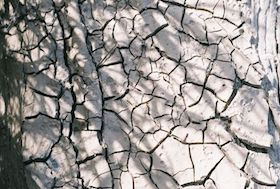 The Nyah-Vinifera Park, 30km north-west of Swan Hill, is home to over 250 sacred sites for the Wadi Wadi people including artifact scatters and a highly significant burial ground. Wadi Wadi Traditional owner, Cain Chaplin, took everyone on a tour of the forest. This gave government representatives the opportunity to see and hear first hand how the forest has changed since industrial irrigation and the commodification of water has seen mass amounts of water pumped out of the rivers to supply big agriculture.

In the past decades, the forest has become dry and the red gums are suffering. There isn’t enough water in the river for Nyah-Vinifera to flood naturally, as it once did, every two to three years. These days, the forest relies on water being pumped onto the floodplain. In May this year, the Federal Government dropped the effort to recover more water for forests like the Nyah-Vinifera, in exchange for Sustainable Diversion Limit (SLD) Adjustment Projects which means bigger pumps and levie banks throughout forests, wetlands and floodplains.

The meeting saw tensions and frustrations arise after a history of community consultation that lacked genuine attempts to understand Traditional Owners concerns and recognise their millenniums old knowledge of land management. The time spent bickering over budgets and infrastructure projects could be better spent consulting with traditional owners who understand the land and deliver water to the floodplains that need it most.

During the meeting, Cain Chaplin handed over a statement to the government agencies on behalf of the Wadi Wadi community firmly rejecting the proposed adjustment projects on the basis that: 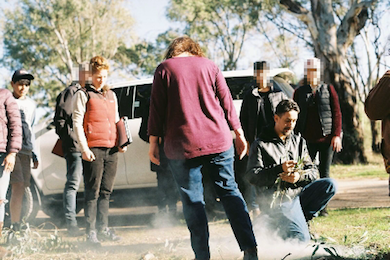 Despite this the Federal and State Governments are trying to push through funding agreements right now.

Water has been stolen, much like the land we stand on. The Nyah-Vinifera is suffering through weed infestations, dense sapling growth and biodiversity loss as a result of failed land management practices and lack of water. ‘One spark and it’s gone’ says Cain Chaplin looking at the dangerous and unnatural levels of leaf litter on forests floor, as requests for cultural burns to reduce bushfire risk have long been left unanswered.

At the end of the day, the discussion boiled down to a request from traditional owners of Wadi Wadi country to be consulted about changes to the land. Free, informed and prior consent must be given before any developments go ahead. Unfortunately, the prevailing premise of the day was seeing traditional owners being backed into a corner, where they are being forced to choose between SDL projects and the security of environmental water being delivered.

Traditional owners are fighting to protect their country and culture from big developments like this throughout the Murray Darling Basin. There’s no simple solution to water management, but indigenous led management would be a good start.

Rivers needs the freedom to ebb and flow, from source to sea.

Sign our petition to state and federal Water Ministers if you want to see water be kept for our rivers.