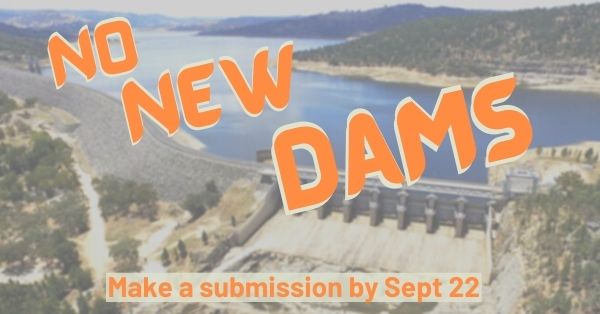 A NSW Upper House inquiry is underway into the impacts of dams in the Murray Darling fast tracked by NSW Government.

The Murray-Darling supports RAMSAR wetlands and critical ecosystems for endangered fish & migratory birds and supplies food for millions. So whether you live near a project, downstream or elsewhere in Australia these projects effect you!

There has not been a new dam built in NSW since 1987, but after the 2019 election, proposals for new water infrastructure have popped up right across NSW.

The Murray-Darling Basin is in critical condition. In recent years there has too little water flowing through the system to maintain the environment, communities or supply family owned agriculture.

Dams don't make water, they take it from one place and store it in another.

Rushing through big projects without proper scrutiny presents a huge risk to environment, Aboriginal culture and way of life right across the Basin, and impacts every person who lives in Australia.

The inquiry will look at the reasons for and impact of these major water infrastructure project.

A couple short paragraphs on who you are and why you care about the impact of new dam projects in NSW will hold our politicians to account.

There's are 40 Indigenous nations in the Murray Darling Basin, all projects take place on sacred land where sovereignty was never ceded.