Menindee to lose the last of their fish 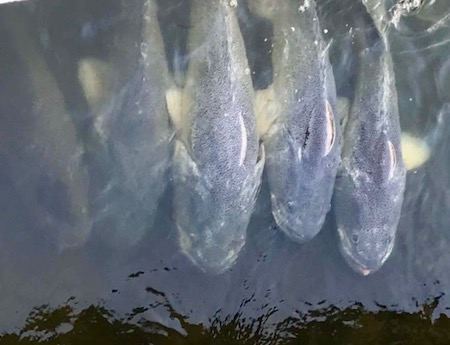 The latest announcement by NSW Minister for Regional Water Niall Blair on the lower Darling has been dubbed a political stunt by Menindee locals.

This announcement comes over a week after the third mass fish kill in the area with locals expecting another in the coming days as temperatures are expected to drop once again. On Tuesday, Murray Cod and thousands of bony bream were seen congregating at weir 32, unable to enter the fish ladder and stuck gasping for air.

Dick Arnold a Menindee resident and life long fisherman said “The first thing that comes to mind is are they healthy enough to withstand the travel? The sudden change in water quality is a major concern”

Badger Bates of the Barkandji Nation also questioned how the fish would cope with the 600km journey to Narrandera. Bates who witnessed first-hand the fish struggling at the weir was brought to tears on Tuesday. “The fish are already stressed, you can see that.”

Both Bates and Arnold insisted experts were needed to ensure the fish were fit enough to be handled and survive the journey. Bates also believed Barkandji people of the Menindee Local Aboriginal Land Council that own Appin Station (where the weir is situated) should have been consulted by the minister’s office before the announcement was made.

As the NSW election nears locals believe the “political rubbish” will continue. “They’re going to big note themselves because they saved a few and yet killed millions” says Arnold.

This announcement from the NSW government comes as a surprise after NSW Premier, Gladys Berejiklian stated in January she “cares more about people than fish”. According to locals, the current NSW and Federal governments have been "missing in action" since this ecological disaster began in December, with locals relying on donations from many generous Australians of clean water for human consumption as well as donated aerators to save remaining fish.

Kate McBride a Lower Darling resident said: “Although we hope to see these animals survive this is simply too little too late from the government which, through mismanagement of the Menindee Lakes, have caused these fish kills”.

McBride says, “Our rivers, environment and communities have been decimated by this disaster and moving the few remaining fish is ultimately a publicity stunt after they’ve sat back and done nothing about the previous three fish kills. What we need is strong leaders who will enforce change to ensure this never happens again” 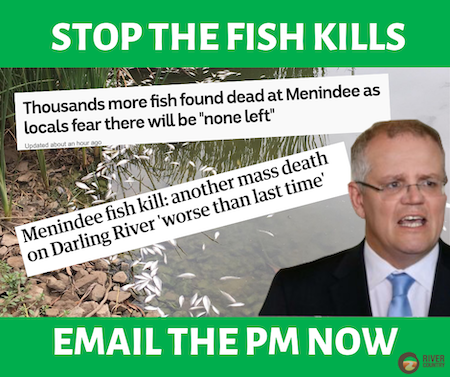 We're calling on Scott Morrison to acknowledge the disaster on the Darling as a state of emergency. The federal Government must step in to supply drinking water and take urgent action to return flows to the Darling.