Keep the loggers out of our Red Gum Parks 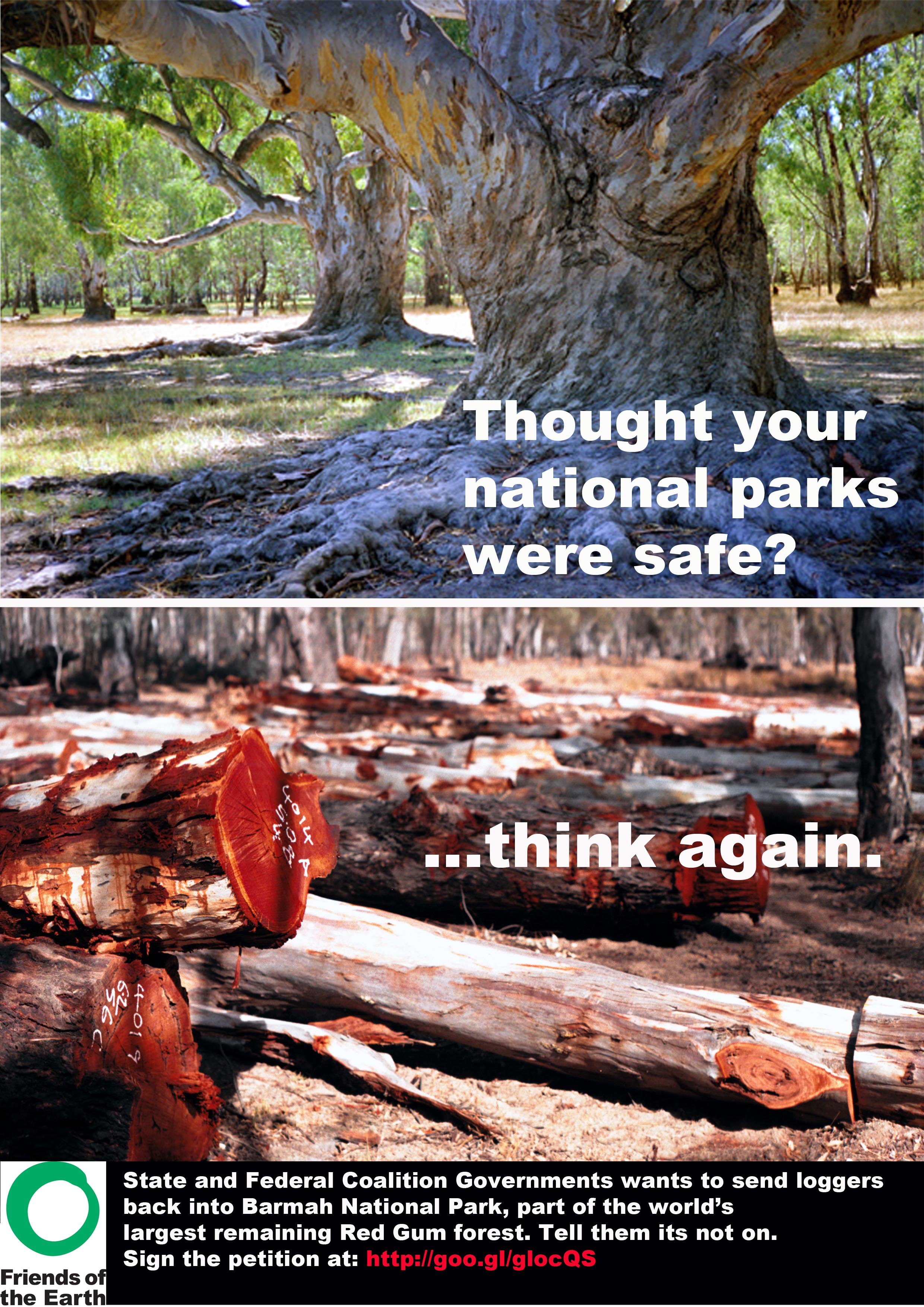 What does ‘Ecological Thinning’ mean for your National Parks?

The NSW State governments plan to run a trial of “ecological thinning” inside the Murray Valley National Park. The trial will use logging machinery to test weather cutting out trees from these River Red Gum forests will improve the health of the ecosystem. The project will have a range of impacts on this landscape of international significance.

Approval has just been given by Environment Minister Greg Hunt for the NSW Government to go ahead with the trial.

Friends of the Earth is asking for your help to keep logging out of our iconic River Red Gum forests and to safeguard the natural environments we all love.

What is the ‘ecological thinning’ trial?

The trial is essentially a scientific experiment that will test the use of “ecological thinning” as a management tool to improve the ecological function of River Red Gum forests.

Changed flooding regimes, logging and cattle grazing over the years have changed the structure of River Red Gum forests. The proponents of the trial argue that dense stands of smaller trees are more sensitive to drought and die-back and also provide less habitat values for native species.

The “ecological thinning” trial would test weather cutting out large numbers of these trees would improve the health of the forest.

How would the trial be conducted?

66, 9 hectare ‘plots’ have been chosen across the Murray Valley National Park which makes up part of the Barmah and Millewa forests (largest Red Gum forest in the world). 44 of these will be ‘thinned’, with either 7 or 15 metre ‘spacings’ between the remaining trees. [i] This is similar to thinning treatments used in forestry management. In all, around 400 hectares of forest will be ‘thinned’. The results will then be monitored to see if the health of the forest improves.

When would the trials start and how long would they run for?

The trial was planned to commence in August 2012, but was delayed due to approval being needed by the Environmental Protection and Biodiversity Conservation (EPBC) Act. We have not been notified of when thinning is planned to start. Monitoring would begin 6 months after the first round of thinning and continue over a 5-year period.

What’s wrong with the trial?

The benefits are unknown, the impacts are certain

No one knows if cutting out trees will improve the health of these forests. The trial is a scientific experiment, not a response to a conservation problem.  It is ‘scientific logging’ with no proven environmental benefits.  Even an independent scientific review of the trial stated that the  ‘overall effect of thinning upon these [ecological] conditions is not known.’[ii]

The trial has significant design faults which will mean that it will be unlikely to provide a strong conclusion about thinning as a tool to improve the ecology of these ecosystems.

Mechanical thinning of the forest could undermine its long term, natural ability to respond to variability and climate change. Natural thinning (whether driven by drought stress or other factors) allows for “self-selection” of the most resilient individual trees from the populations, potentially increasing the resilience of the ecosystem under prevailing conditions as time goes by.

Ramsar sites are internationally significant wetlands listed under the Ramsar Convention. The Millewa and Barmah forests are part of the largest complex of Red Gum wetlands in the world. These wetlands support threatened species as well as large numbers of migratory birds and colonial nesting waterbirds, and provide healthy watercourses for native fish to migrate through.

Potential impacts on the ecological character of the Ramsar wetland site include soil compaction and alteration, contamination of soil and water, transference of diseases and pathogens, siltation, noise pollution and emissions.

Over 15 nationally listed vulnerable and endangered species are known or likely to be present in the vicinity of the proposed trial.  The trial will inevitably impact on potential habitat for these species through disturbance, vegetation removal, noise pollution and haulage activities. It is also likely to increase the abundance of feral predator species like foxes.[iii]

Because small trees will be cut down and left on the forest floor, the thinning trial will lead to higher fuel levels and increase the risk of bushfire.[iv]

The trial will impose a huge cost on taxpayers in NSW. Money that should be invested in increasing funds for Park Rangers, buying water to keep the Park alive and manage weeds and invasive pests will instead be used to cut down trees.

The Barmah-Millewa forest is a landscape of deep significance to Indigenous Traditional Owners the Yorta Yorta and Bangerang Nations. Introducing logging machinery into this landscape will degrade cultural heritage values. Rare and culturally significant species could be impacted on, affecting Indigenous people’s ability to care for Country.

Traditional Owners have expressed their disappointment at not being adequately consulted regarding this trial. The Yorta Yorta people have a joint management agreement over the Victorian side of the Park. They should be partners in the long-term management of this ecosystem. Responses to ecological problems should be developed with Indigenous involvement and direction from the beginning.

Logging has had a long-term impact on the environmental health of River Red Gum forests. In 2009 logging was banned in the Barmah-Millewa Forest to protect the values of the forest.  Sending commercial logging machinery back into national parks threatens their values and undermines the public’s faith in our conservation laws. If a national park isn’t safe from logging, where is?

The Victorian government is running ‘Operation Detroit’ to try and crack down on illegal firewood gathering in Barmah National Park. Firewood poachers have been caught and fined selling firewood meant for personal use.[vi]   Yet, at the same time, plans are underway to fell trees across hundreds of hectares of the park and give the residues away as firewood. This sends a very confusing message to locals, parks users and firewood businesses. There is no way to guarantee that wood sourced from the felling of these forests would not end up being sold on the commercial market.

What are the alternatives?

River Red Gum forests have suffered decades of mismanagement, drought and now dangerous climate change. These iconic forests need long term, visionary solutions to ensure that they flourish into the future. Restoring natural flooding regimes and incorporating Indigenous knowledge into the management of these forests will create the right conditions for them to prosper once again. Friends of the Earth works closely with Traditional Owners throughout the Murray-Darling Basin to advocate for water entitlements for Indigenous people. Properly managed environmental flows, informed by Indigenous land management, could improve the health of these forests.

If a ‘trial’ of ecological thinning is necessary, there is no need to run it in National Parks. There are thousands of hectares of Red Gum forests in State Forests, where timber harvesting is still practiced, that would be much more appropriate. These areas would also be more appropriate sites to test the forest’s response to drought stress as they are experiencing ongoing water shortages.

What can you do?

You can help protect these forests for the long-term. Please be a part of our online action and email Minister Hunt and Premier Baird to express your concern about their plans to bring back logging into our precious Parks.

Tell your friends about this issue and spread the word!

For more information contact the River Country Campaign, Friends of the Earth Melbourne.