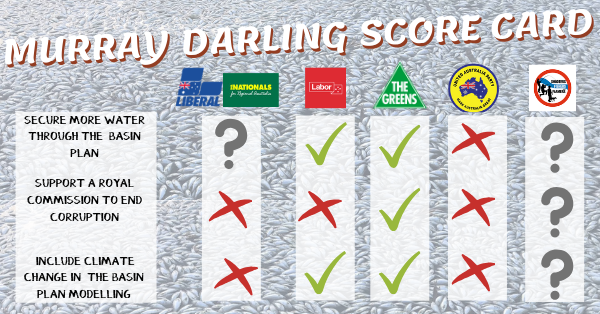 Healthy Rivers Need Water - It's been our catch cry for the last 12 months as we've watched the Darling dwindle from a trickle to a stand still.
But what policies do the major parties have to return water to the rivers, put a spotlight on corruption and transform the Basin Plan so that it can deliver on its key objective - to keep the rivers alive.

Announcements from Minister Littleproud following the release of the Vertessy Report

The Basin Plan is a $13 Billion policy, of which $8 billion has already been spent. The Coalition's policy commits relatively small amounts of funding and fails to detail plans that secure more water for the rivers. In addition, there is no plan to address the alleged corruption within the Government and bureaucracy or to account for the impact of climate change in the Murray Darling Basin.

Note: The Environmental Restoration fund does not have any specifics in the Murray Darling

Repealing the cap on buybacks would be the most cost effective way to secure more water in the Basin Plan, provided water purchases are done with integrity and water for the environment is successfully delivered to floodplains. Renegotiating the Menindee Lakes agreement is a positive for the local community and thorough community consultation including with Traditional Owners is essential for the success of this plan. A formal review of public servants falls short of a Federal Royal Commission, which would have the powers to call witnesses under oath.

See The Greens Plan - Save the Murray Darling

River Country Supports a Federal Royal Commission that builds on the findings of the South Australian Royal Commission. An overhaul of the Basin Plan placing the Environment at the centre with more water buybacks would secure more flows for the rivers.

The United Australia Party has vowed to abolish the Murray-Darling Basin Plan to return the once iconic river system to a healthy, sustainable and functional condition.

The United Australia Party will abolish the plan and take steps to stop farmers paying for their water usage.

To abolish the Murray Darling Basin Plan without a replacement policy would be reckless and irresponsible. The implementation of the Basin Plan is clearly failing, but recommendations from numerous government reports including the South Australian Royal Commission and Productivity Commission provide pathways to improve implementation without creating the instability of abolishing the Plan.

Federal Policy:
Ensure environmental water flows are not set without consideration of the impacts on regional communities and fish stocks.

Note: NSW State Policy has detailed 10 point plan including a Royal Commission into the Basin Plan read it here