From Rural Victoria to Darwin: Fighting for a Frack-Free Australia 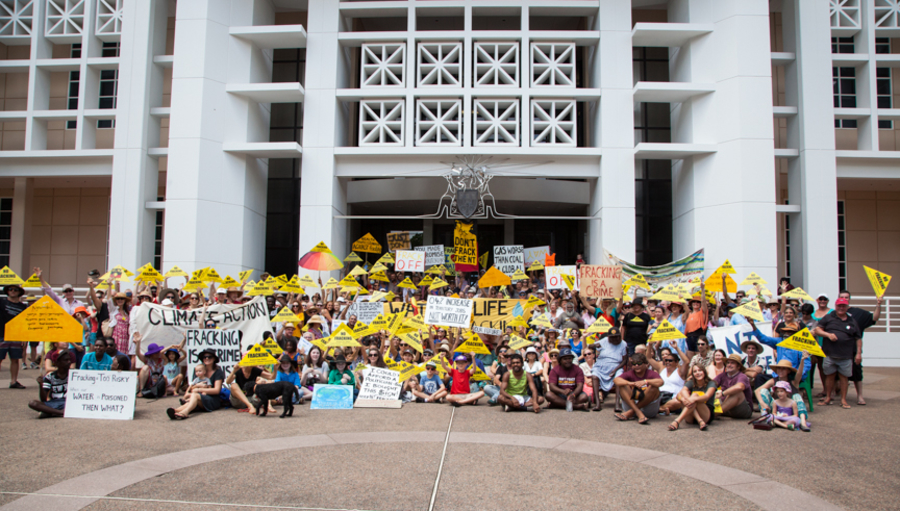 While Jemena carries on with the NT Pipeline construction and the State Government's Inquiry into Unconventional Gas is still underway, communities in the NT are standing up louder than ever against fracking.

As Victorians who continue to feel the relief from our win, we know we haven’t fully won until we have a frack free Australia. In a gesture of support and solidarity, four farmers just traveled over 3000 kms from Victoria to Darwin to rally and stand with communities that are next in line in fighting for land rights, clean water and a safe climate.

Read Deborah O’Connor's reflection, one of the four farmers who took this solidarity trip to the NT.

Fergus and I were looking forward to this trip: our Lock the Gate journey in Victoria has been entirely positive and we have made new friends, renewed lapsed friendships, met with ministers, undertaken research for politicians, had many letters published and Fergus has starred in the odd radio and television interview. We hoped that some of these skills would be transferable to the campaign in the Northern Territory.

What we were not expecting was the fear of the people in speaking out against fracking. The Lock the Gate NT coordinator, Pauline Cass, explained that whilst many people shared concerns about water supplies being contaminated, land being polluted and Aboriginal Land Rights being waived, most people were afraid to speak out or even sign a form in case their name was recognised.

On the eve of the rally we met a young couple who were concerned about the effects of fracking on water quality and supply. We asked if they were intending to go to the rally and they shook their heads. At first they said they had a lot of work to do on their farm and perhaps our faces reflected disappointment. Then they begrudgingly explained that their business had a number of NT government contracts that was vital to its ongoing success. They couldn’t afford to be black banned.

I later noted that the Honorable Justice Rachel Pepper had made provision in the Scientific Inquiry into Hydraulic Fracturing in the Northern Territory for the choice of anonymous submissions, through fear of repercussions from the Territory government. I noted that she did not say “perceived repercussions”.

Whoa… this takes some getting used to in a liberal democracy. This is Australia, not a totalitarian state. Opposition to the government is a right – or am I a southerner not used to Territory ways?

We were anticipating a steep learning curve when talking with farmers about the challenges provided by a wet and dry season, not that there are a different set of rules in society.

On the morning of the rally, we stood outside the most beautiful parliament building in the country (Southern hemisphere... the World?) and introduced ourselves to a number of people. We met Daniel Tapp from Big River Station (who later spoke at the rally) and he told us his concerns about fracking. Daniel and Fergus exchanged livestock farming stories, leaving me in awe of this resilient, strong man who loved his station. I spoke with a number of Indigenous women, who appreciated that we had travelled from Victoria to help their cause. I commented that my journey from Gippsland to Darwin was quicker than theirs from Elliot and Arnhem Land (I have spent time in Ngukurr, Arnhem Land giving me a point of reference in discussion).

There were several reporters from newspapers and television in attendance, most listening to what was being said.

At the rally over 600 people listened to impassioned speeches from a number of people who recognise that good food, clean water, viable land and respect for others are significantly more important than the money gained by a few who seek to exploit natural resources. There was a camaraderie and care for each other within the crowd.

A message repeated by many speakers is that farmers, business owners and Traditional Owners felt united by their values and knew that the fracking industry sought to destroy what was important to them. As one young Indigenous speaker said, “What’s the point of us learning our Indigenous languages if we have no country to speak them in”. 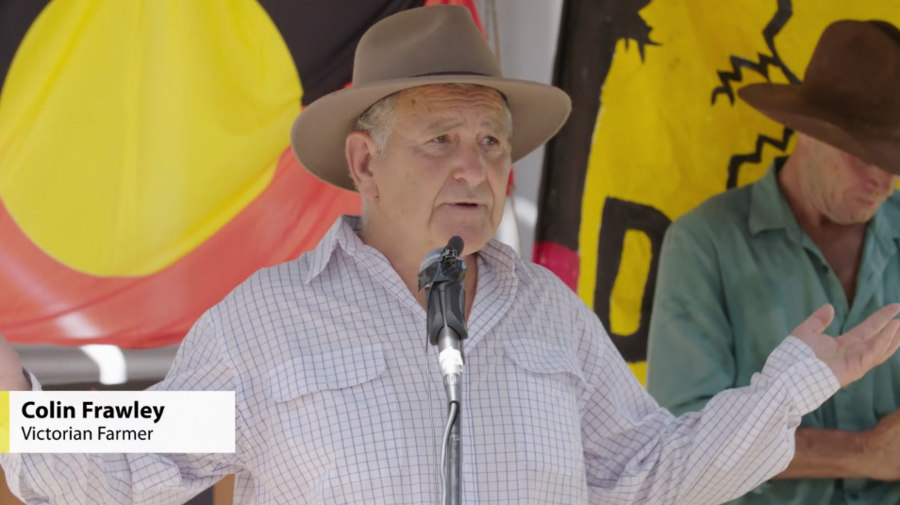 After the speeches, the people moved to the steps of parliament for some photographs, with people proudly waving their yellow triangles and banners. Later we gathered in the park watching dancing from the Borroloola dancers, listening to singers with anti-fracking protest songs and speeches. There was the general recognition of a job well done.

The fight is nowhere near over: it is outrageous that people are afraid to speak of their concerns. The miners, some members of the business community and politicians will exploit the land and we can’t trust their promises to clear up the mess they make. There are too many instances of corporate shenanigans desolating land and contaminating water that leaves people grieving for loss. If through our trip, Fergus and I were able to highlight this gross injustice in a small way then we are happy.

We will continue to raise awareness in the southern states, of the plight of the people in the Territory, as we must continue to stand with them and show our solidarity and support.

Watch a video of the day here and support their travels costs to the NT here.