Four Corners: What Did We Learn?

Last Monday's episode of Four Corners revealed how tens of millions of taxpayer dollars are being used to expand irrigation systems for major agribusiness instead of preserving water for the environment. More than $4 billion intended to protect the Murray-Darling Basin has been handed out, but corporations have been exposed using this money to build new dams to water cotton fields and nut groves. This shocking misuse of public funds for private gain is yet another case of corruption and maladministration by the government. 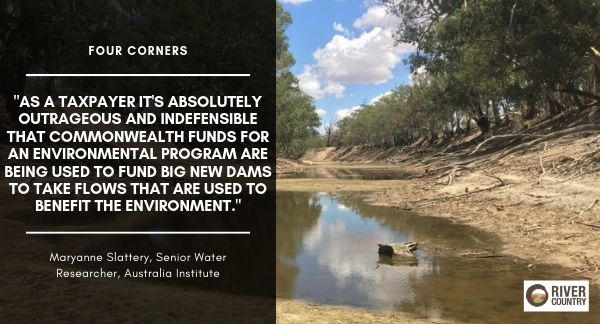 How are they doing this?

The taxpayer-funded scheme, introduced in 2012, intended to recover water for the environment by giving farmers money to build water-saving infrastructure in exchange for their water entitlements. Some of the beneficiaries of the scheme are partly foreign-owned corporations that have used the money to transform vast tracts of land along the Murray-Darling system. New crops such as almonds and walnuts have been introduced, which are extremely thirsty and not suited to the natural climate. These grants and subsequent construction works have allowed for increased extraction of water.

One of the biggest operators is Webster Limited, partially owned by Canadian pension fund PSP. They received $41 million from the water infrastructure scheme to expand their operations by hundreds of square kilometres in the Murrumbidgee Valley. This funding covers more than half of Webster Limited's proposed $78 million capital works program, where they plan to store an extra 30 billion litres of water and irrigate an additional 81 square kilometres of land for cotton farming.

On the Hay Plains, Webster is one of several agribusinesses building dams to store huge volumes of water on the outer reaches of the Murrumbidgee River. The region, where temperatures regularly hit the 40s, is unsuitable for such development due to high rates of evaporation.

Another flaw in the scheme is that of transparency and accountability. Former Commonwealth Environmental Water Holder David Papps highlighted that the Basin Plan accounting system was lacking transparency and rigour, which has been a long-term problem. The Four Corners program revealed that no-one in government monitors whether the taxpayer funded works are delivering on their promised water savings.

Farmers Julie & Glen Andreazza told Four Corners they believe the government overpaid them for works under the scheme, being paid to build infrastructure they would have built regardless of the funding. Glen estimated that the government paid double what it should have to buy-back water on their farm. Later, they were able to buy the same amount of water they gave up the rights to, on the market for a lower price.

Some irrigators are using the lack of regulation to their advantage, buying cheaper water from the Murray river and selling it to the government in exchange for infrastructure projects on farms along the Murrumbidgee.

But what does this all mean?

There is a lot of money the government could have spent a lot more cost-effectively to achieve a lot more recovery of environmental water. Instead, the government chose to fund major construction works which has been incredibly expensive.

"The scheme doesn't work. Its first problem is, it's horrendously expensive compared to buying water licenses. The evidence at the Royal Commission was at least 2.7 times more expensive to the taxpayer" - Richard Beasley SC, Senior Counsel Assisting SA Royal Commission.

Professor Richard Kingsford explained how new dams are trapping water that would have otherwise flowed downstream into habitats and communities. They are increasing the take from the river system, decreasing the amount of water in the river. 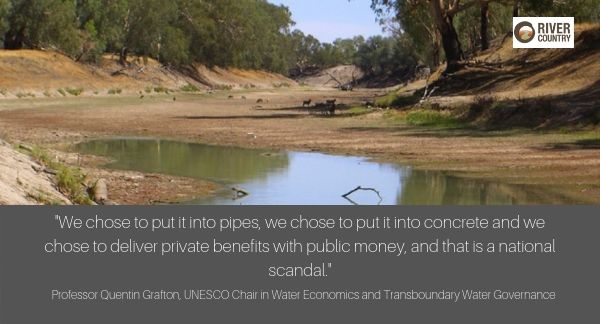 What do we do about it?

We need a complete overhaul of the Murray Darling Basin Plan, to ensure its implementation does what it is supposed to - protect the environment and save our rivers. We must halt any further construction works before a full water audit is conducted; to find out how much net water we have in terms of the impact for the environment. We need strong evaluation processes to ensure the scheme is doing what is supposed to, instead of allowing for increased over-extraction of water.

Email the Victorian Water Minister Lisa Neville asking for her leadership to get the Basin Plan back on track. We need a strong Plan now more than ever before, to save our rivers before it is too late.