Friends of the Earth (FoE) and Friends of Gippsland Bush (FoGB) remain frustrated by the amount of time it is taking to get forest areas added to the Brataualung Forest Park in the Strzelecki Ranges. Only 29.8% of the 8,000 hectares (ha) promised by the Victorian State Government as far back as 2006, has been reserved. 2,390ha of land was reserved by July 2018. The full handback was supposed to occur in 4 stages, with ~2,000ha being handed back every 2.5 years between 2018 and 2028. The second tracts of 2000ha of land were supposed to have been reserved in 2021, but have been delayed by over a year. The delays have apparently been caused by Covid 19 and lack of appropriate regeneration in some logged areas.

The creation of the Brataualung Forest Park has been an extremely complicated process. The Park Reserve will form a 30-40 km linking corridor along the main ridge of the Strzelecki Ranges, stretching from Gunyah Gunyah Reserve to Tarra Bulga National Park. It was initially visualised by Biosis in their 2001 publication 'Strzelecki Ranges Biodiversity Study', in an attempt to protect stands of highly vulnerable Cool Temperate Rainforest with 250 metre forest "eucalypt buffers" and to create an additional reserve in the most depleted bioregion in Victoria. The land however had been sold to Hancock Victorian Plantations in the late 1990's by the Kennett Government making negotiations over its buy back and future management very difficult. 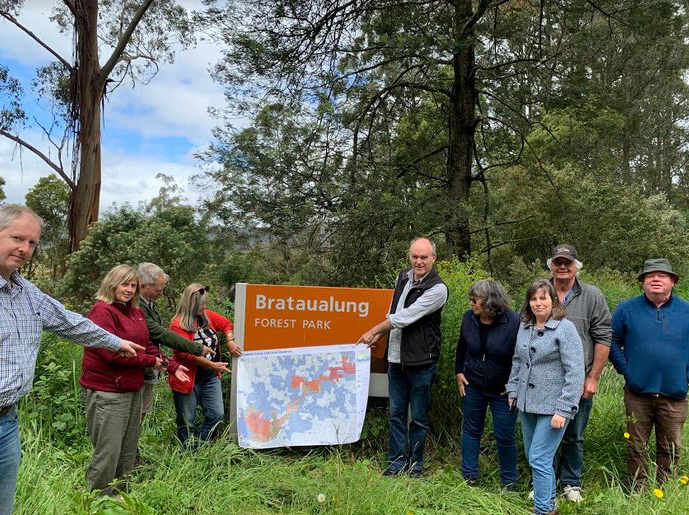 SKAT supporters visited the Strzelecki Ranges in December 2022 asking where is the rest of the promised reserve (reserve is shaded pink on the map). This photo was taken at College Creek which was included in the Brataualung Forest Park in July 2018. 70% of the promised Reserve however is still waiting to be reserved.

A local campaign led by Friends of Gippsland Bush (FoGB) was started in the late 1990's, with supporting organisations including three local shires, West Gippsland Catchment Management Authority, Strzelecki Forests Community Group, National Park advocates and Trust for Nature. Friends of the Earth was also supportive and did alot of work documenting logging breaches and holding Hancock to account. This groundswell of support meant that the State Government came to the table and a number of high level meetings were held by all parties between 2004 and 2006. At that time the area was known as the Strzelecki Cores and Links Rainforest Reserve.

In negotiations in the lead up to the eventual 2006 Heads of Agreement, Hancock claimed that they would not be able to meet their contractual obligations to Australian Paper (300,000 cubic metres of hardwood/year) if they could not log within the cores and links reserve. As a way to move the negotiations forward the parties decided that a once only logging would occur in the least sensitive parts of the linkage and parts of the core areas to make up some of the supply shortfall. Once the logging in these areas occurred those areas would be rehabilitated and added to the reserve. It was vitally important that if some areas were to be logged then the best possible standard would have to be employed so as not to undermine the long term ecological integrity of the future reserve, hence any logging under the MOU meant that Hancock had to consult with Trust for Nature and the Strzelecki Forests Working Group. Furthermore, regeneration was to be given priority over replanting based on the progress of growth on a coupe by coupe basis. This was to be closely monitored by the Trust for Nature Manager for West Gippsland and the community. It was to be a transparent and accountable process.

Conservationists were acutely aware that logging "plantations/regrowth" within the future reserve, would significantly increase the incidence of the fungal disease Myrtle Wilt which can be a death sentence for stands of Myrtle Beech Rainforest. Because the land owned by Hancock was defined as private land, rainforest buffers that apply to public land were much smaller on Hancock land, making the ecological issue of rainforest management in the Strzelecki's even more pressing. During this time, Hancock was also trying to redefine rainforest out of existence. They also ignored expert advice on buffers required to protect Cool Temperate Rainforest and Warm Temperate Rainforest,  ignored recommendations of the BIOSIS Report and discontinued discussions with the community regarding protection of Rainforest, which was part of their Forest Stewardship Council requirements. Any logging therefore increased risks to the rainforests substantially. 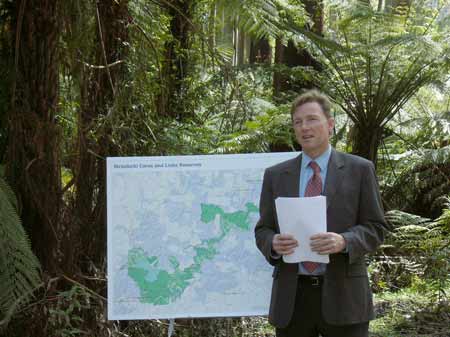 In October 2006, then Environment Minister John Thwaites announced a Memorandum of Understanding between the State Government and Grand Ridge Plantations (Hancock Victorian Plantations), Trust for Nature, Strzelecki Forests Community Group and Australian Paper, where the 8,000ha of land would be purchased and gifted to the Trust for Nature to manage on behalf of the community.

After this MOU was signed, more negotiations and meetings followed for a period of over a year, with Hancock doubling down arguing that they wanted access to more of their "plantations" inside the reserve. Conservationists were also outraged that less than two months after the MoU was signed (Dec 2006) logging had already began in sensitive areas without any consultation with the Trust for Nature and the Strzelecki Forests Community Group in clear breach of the October 2006 MOU. During 2007 and 2008 numerous breaches to the MoU were found by FoGB and FoE. It was clear that Hancock could not be trusted.

With the resignation of Premier Steve Bracks in July 2007 also came the resignation of key Forest Reserve supporter John Thwaites. Bracks was replaced by John Brumby and Thwaites' predecessor was the less than enthusiastic Gavin Jennings. Hancock then increased the pressure on Jennings and the community by claiming that if it could not log almost all of its "Mountain Ash plantations" within the proposed reserve, then it would be forced to log its native forests elsewhere in its Strzelecki estate to make up the volume shortfall.  The stalemate ensured and a new deal was secretly drawn up, with no input from the local community who had fought to establish the Reserve for years. 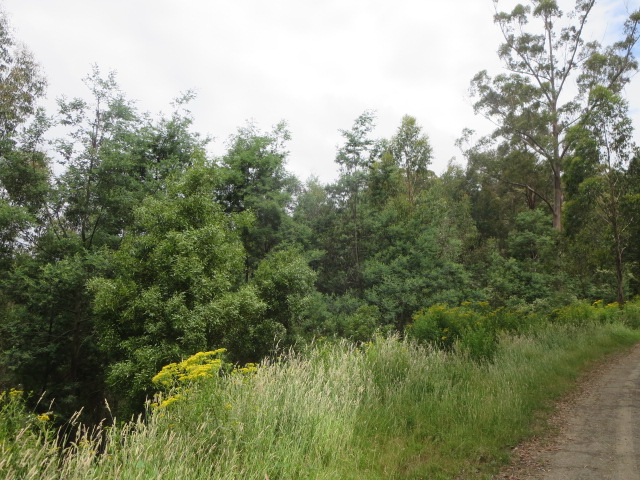 January 2023: 14 years after almost 40% of the College Creek catchment was clearfelled, it is beginning to slowly heal. What is the fate of the rainforest inside the catchment? Hancock started logging College Creek one week after the disastrous February 2009 bushfires.

The new deal was announced in May 2008 by Jennings. It allowed for additional clearfelling of 600 hectares of "Mountain Ash" in some of the most sensitive rainforest catchments including College Creek, Agnes River, Franklin River, Jack River, South Middle Creek, Merrimans Creek, Morwell River and Albert River - complete no go zones for local community reps and FoE.

The new deal was "cooked up" by Jennings with key support from the Director of the Trust for Nature, who did not consult with his manager for West Gippsland or the community. To try and undermine local community resistance, the Government and Hancock also roped in support from the Wilderness Society and Victorian National Parks Association (see page 55 of link) who agreed to the clearfelling of almost 20% of the future reserve, without properly understanding what they were supporting. No explanation (or apology) to the community has ever been given by either of these organisations, however it is likely that they oddly thought they could raise the profile of protecting East Gippslands' forests by allowing logging in the Strzelecki's!!! No awareness of the threats posed to both Strzelecki Cool Temperate and Warm Temperate Rainforest appeared to be understood by parties supporting the new deal. No thought was given to the impacts the new deal would have on species such as the crucial Strzelecki koala population, one of the most important populations in the world.

Of particular concern was 300ha of clearfelling inside College Creek, which was a site of national conservation significance due to its rainforest attributes. What has the impact of this logging done to the these attributes? Hancock also tried to sweeten the deal by claiming that it would now "protect" 15,000ha of its custodial land under Section 69 of the Conservation, Forests and Lands Act. No details of this part of the deal were made public and much of this custodial included drainage lines and isolated stands of vegetation. Hancock supposedly already had a policy of not logging its custodial land. 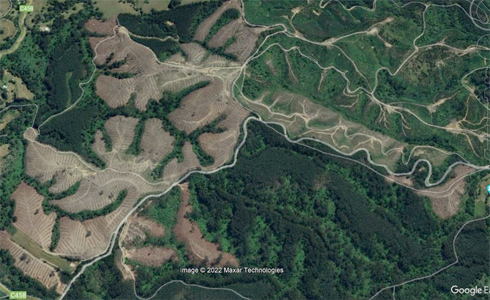 Recent Google Earth image of intensive plantation logging by Hancock in the Morwell River Catchment outside of the Brataualung Forest Reserve. Hancock is converting vast areas of hardwoods into pine plantations in the Strzelecki's, including areas in close proximity to rainforest. Dan Andrews announcement to shut down logging in native forests by 2030, has major ramifications for the Strzelecki's where logging is set to continue until 2098 and beyond. This also would have been the outcome of forests within the Brataualung Forest Park if the Park had not been created. 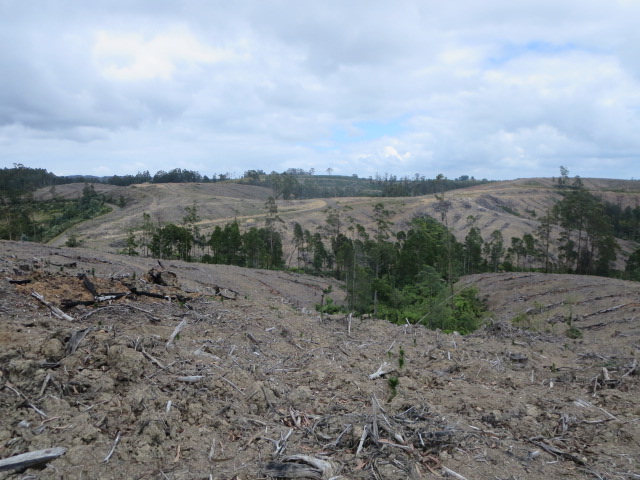 January 2023: A close up of Hancock's recent "handiwork" in the Morwell River Catchment. What chance does a koala have in such an environment? Dan Andrews recent announcement to increase pine plantations in Gippsland by 15,000ha will include areas such as Morwell River catchment, which essentially will now be converted to a massive pine plantation.

The new deal also included a dubiously written regeneration plan, where before areas are reserved they have to meet certain regeneration standards. Hancock has to replant areas that had been logged with 90% Mountain Ash at 300 stems per hectare. If this standard was not met some areas would have to be bulldozed and replanted.

The community had no say in the writing and implementation of this regeneration plan despite the 2006 MOU. Was this plan devised with the plan of future logging?

In July 2018 ten years after the revised deal, the first areas were reserved with the name being changed from Cores and Links to the Brataualung Forest Park after a naming process was put forward by the State Government. 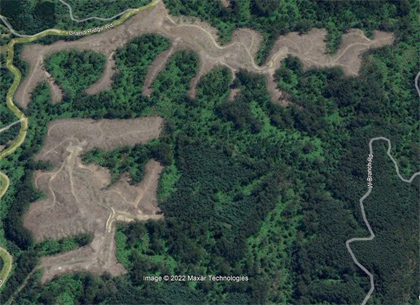 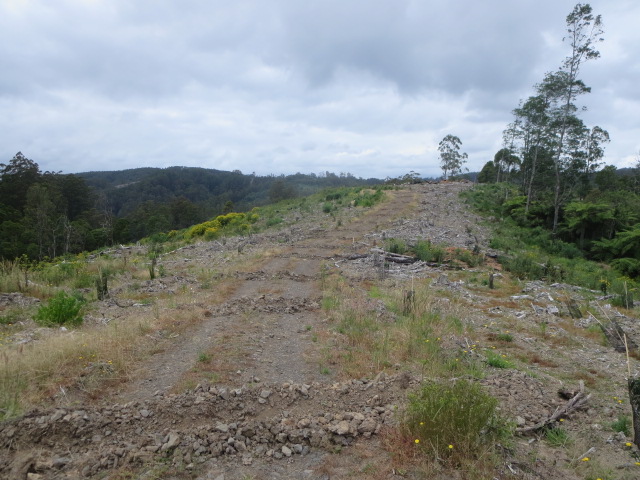 January 2023: Bell Boulevard after logging and recent plantings inside the future Brataualung Forest Park. This might make good koala habitat after 2050?

The Strzelecki Ranges will continue to be a sacrifice zone for the timber industry for decades to come. The establishment of the Brataualung Forest Park may offer some protection to the best rainforest and old growth forest of the region and will mean that establishment, spraying and logging of ~1500ha of "plantations" within the Park will cease. However the majority of the soils, waterways and forests of the eastern Strzelecki's outside of the Park will continue to be depleted and the animals that rely on these areas for their survival be increasingly isolated in islands of native vegetation with little connectivity across the landscape.

Despite FoE being elbowed out of negotiations by Gavin Jennings in 2008, and undermined by parties with no interest in the Strzelecki Ranges, FoE believes that the Brataualung Forest Park deserves wider recognition and understanding. FoE will continue to lobby for its creation and will continue to monitor logging in the region. There has to be a better way.

Whilst not perfect, the Reserve will allow for some ecosystem healing to eventuate and will hopefully provide a sanctuary for a myriad of species in the region. We have already heard that some species of birds are making a comeback in areas that have been replanted. The concern for species such as koalas however could be more daunting considering the lack of Koala Feed Preference Trees in the Reserve. A viable koala population requires a minimum number of 5,000 animals with a contiguous high quality feed source. FoE estimates the current koala population at between 2,000 - 3,000 animals throughout the entire Strzelecki and South Gippsland regions. It would have been slowly increasing from being almost extinct in the 1920's until the arrival of Hancock in the 1990's.

Any donations for monitoring of logging operations in the Strzelecki's are greatly appreciated. A little goes a long way.