Community action and the biggest climate strike in years has put climate justice on the agenda as the 2022 Federal election nears.

The devastation caused by climate-fuelled floods in northern New South Wales reminds us of the consequences if governments and corporations refuse to deliver deep emissions cuts this decade.

Communities on the frontline of climate impacts have shown incredible courage and resilience in response to the latest disasters. We keep them front-of-mind as we fight for urgent action on climate here in Victoria.

Here's a quick update on our efforts in March and upcoming actions...

'RACE TO ZERO EMISSIONS' SHOWS THE COALITION IS AT THE BACK OF THE PACK ON CLIMATE: 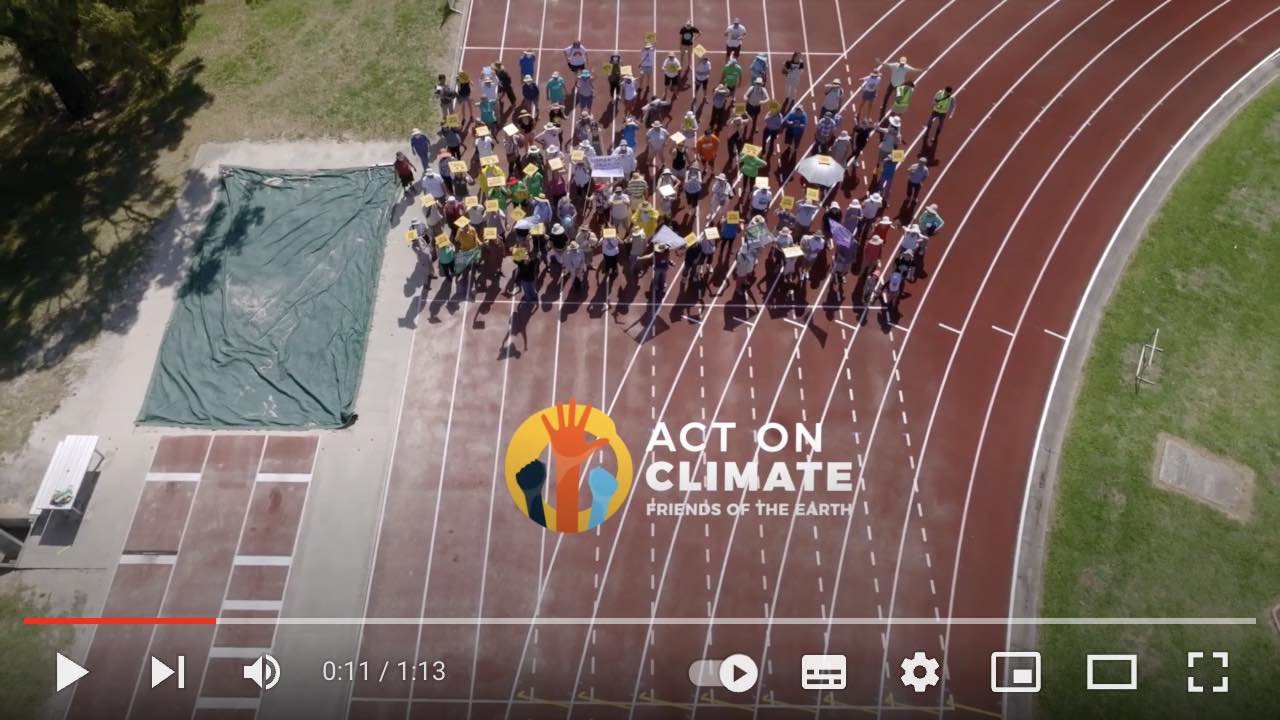 When it comes to the climate crisis, we're in a race to zero emissions. Yet the Morrison government's weak 2030 climate target puts us at the back of the pack in a race we can't afford to lose.

On Saturday 19 March, over 150 community members gathered at the Box Hill Athletics Club in Melbourne to make that very point.

Our Race to Zero Emissions action demonstrated where Australia's political parties and countries stand in that race. It showed that the Liberal and National parties have the most ground to make up if they're to be taken seriously on climate. Click here to watch the video.

Friends the Earth are calling on our supporters to email government MPs and Senators to remind them that tackling the climate crisis is a top priority (it takes less than two minutes).

CLICK HERE to call for the Federal government to adopt a science-based 2030 target. 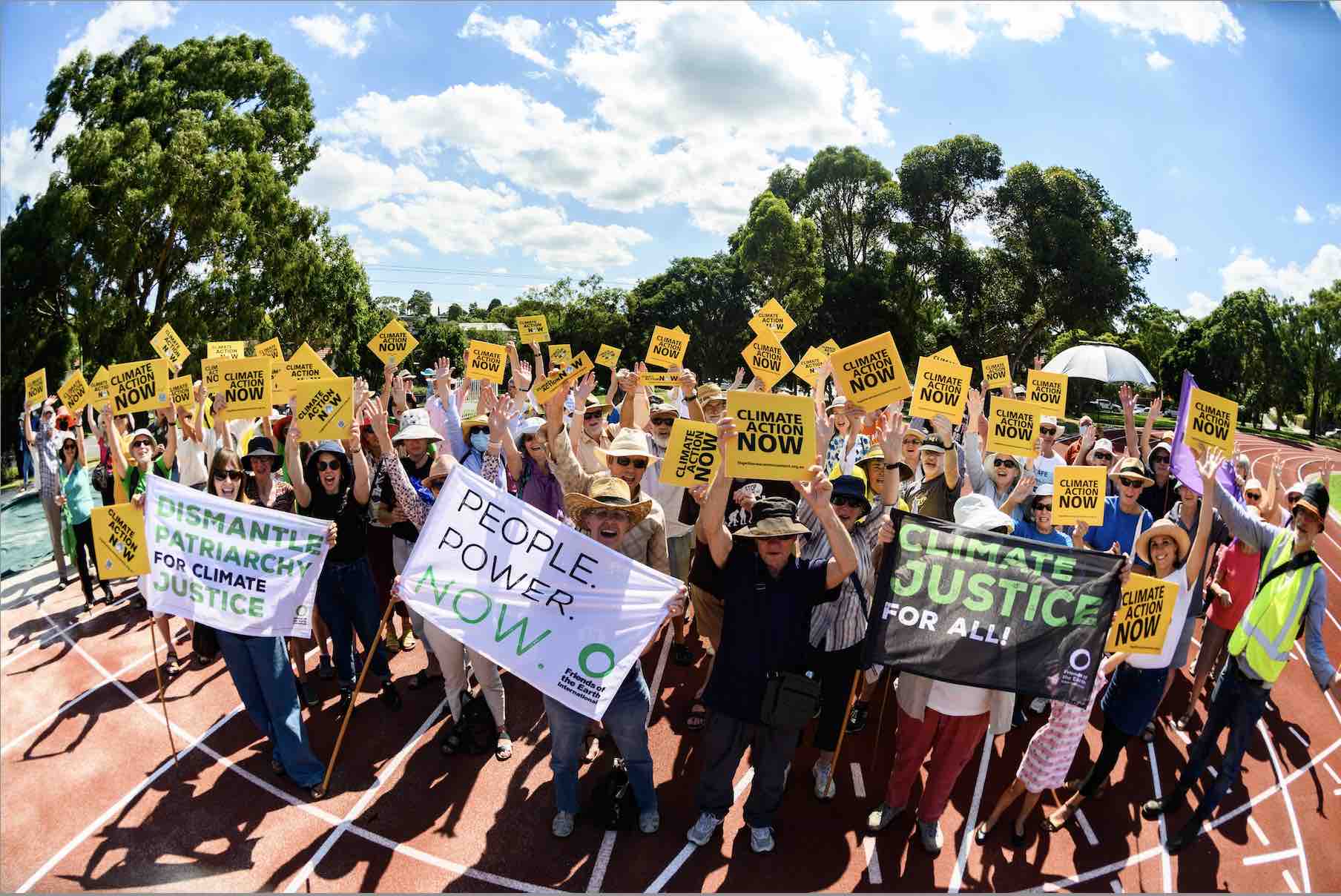 Community members in the eastern suburbs of Melbourne continued their grassroots campaign in March with weekly actions, a climate signage blitz that distributed hundreds of 'Climate Action Now' signs throughout the region, and a well-attended event showcasing Electric Vehicles.

In April, we will see community forums held to elevate the public conversation about Federal government responses to the climate crisis.

These events are a great opportunity not only to get your issues raised in front of candidates, but also other community members. The more people hear about climate change at these events, the more likely it will be a top agenda item and get the attention it deserves.

Act on Climate's Jarred Abrahams has pulled together a blog on how to put climate on the agenda at these events. Take a look for Jarred's hot tips and get in touch if you spot a community forum in your area.

JOIN the next Climate Signage Blitz in Brighton on Saturday 9 April.

FRIENDS OF THE EARTH KICK OFF 2022 WITH JOINT INFO NIGHT: 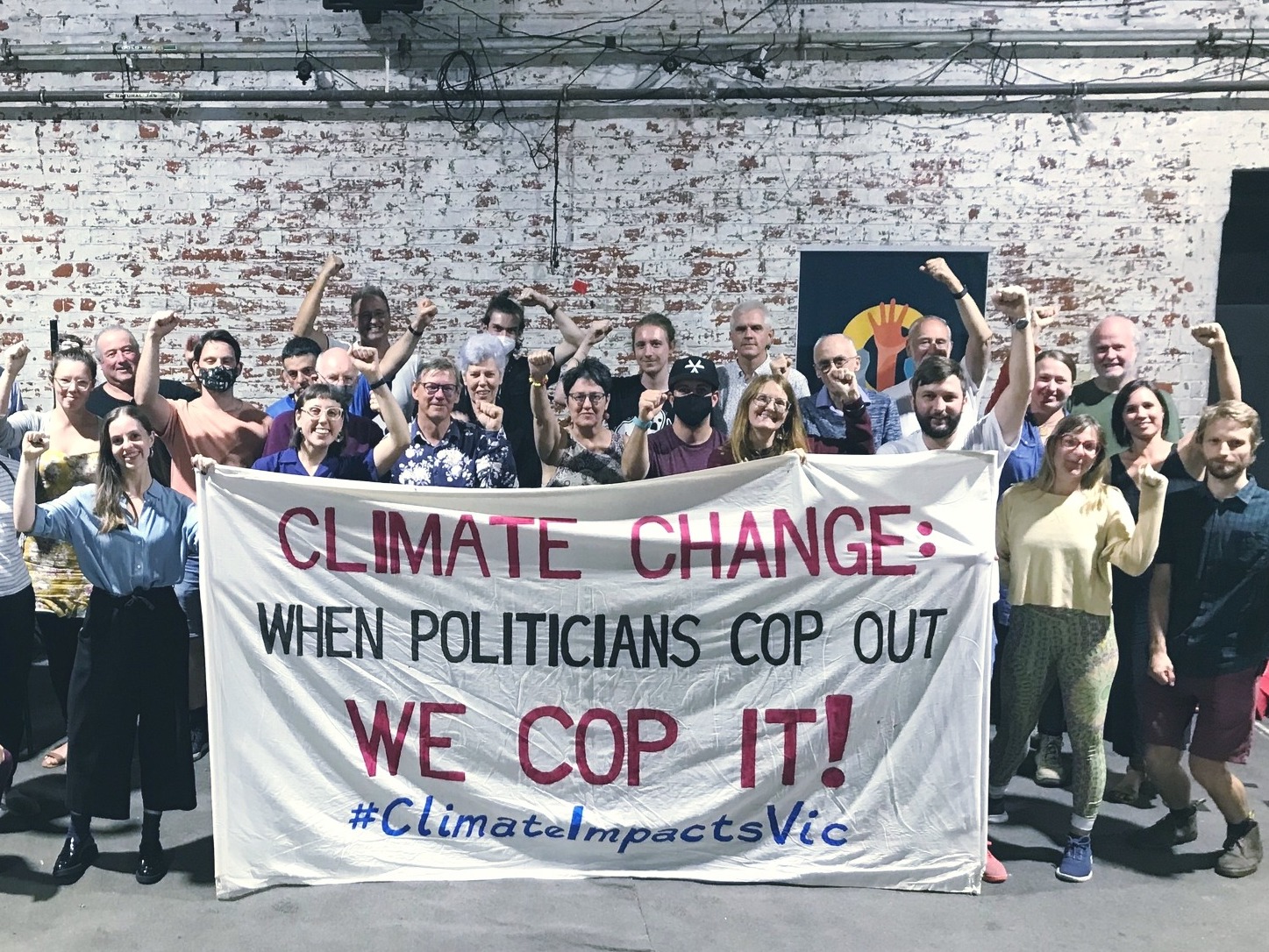 Friends of the Earth members kicked off another big year of grassroots campaigning with our first face-to-face gathering in years.

FoE's community-driven campaigns have had a tremendous impact over the last decade.

Together, we've helped turn Victoria from a climate laggard that had essentially banned wind farms and was open to fracking and coal exports, to a climate champion with a permanent ban on unconventional gas and strong climate and renewable energy policies.

But we have work to do... This year we'll be campaigning for a comprehensive plan for Victoria to smash its target of halving the state's emissions by 2030. Let's get organised and build community power so our demands cannot be ignored.

ATTEND Act on Climate meetings to get involved in the push.

WHAT DOES THE CLIMATE CRISIS MEAN FOR WORKERS? 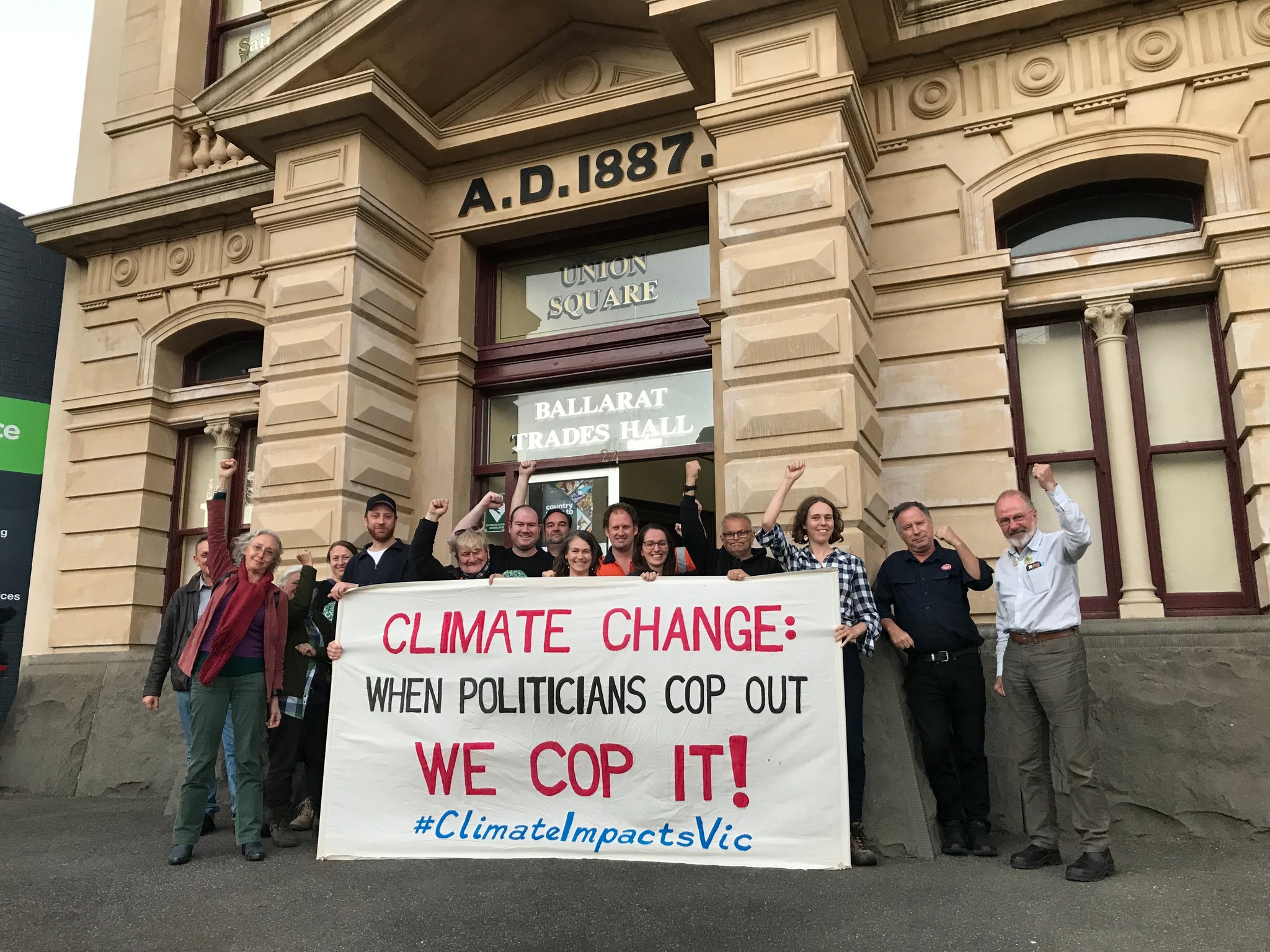 Friends of the Earth has been rolling out a Climate Impacts at Work survey to the members of five Victorian unions since January 2022. The surveys have officially closed and the findings will be released in a few months.

The project has already unearthed powerful stories from workers about how climate change is threatening their health and safety on the job. Check out our interviews with health worker, Jason; cafe supervisor, Monique; and public sector legal advocate, Mark.

You can also read Act on Climate campaigner Anna Langford's piece 'The Workers on the Frontlines of Climate Impacts' in Trades Hall’s We Are Union Journal, and listen to her Dirt Radio interview with two Health and Community Services Union members here. 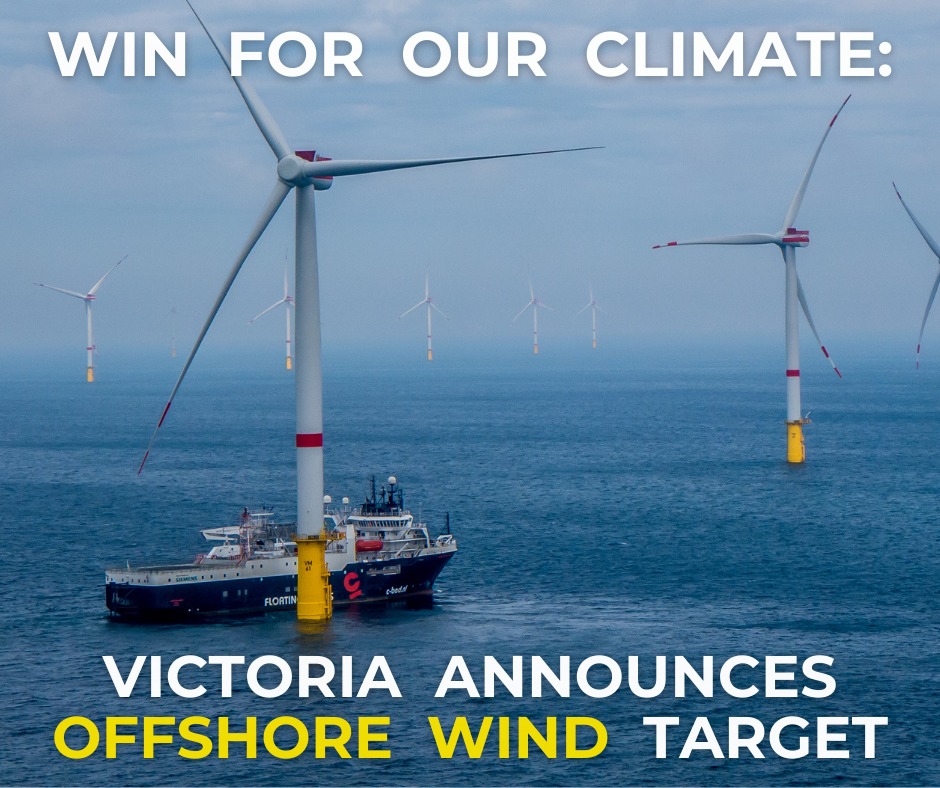 "Establishing an offshore wind sector in Victoria will be critical for delivering the deep emissions cuts needed to avoid worsening climate impacts," Friends of the Earth's Pat Simons told The Age.


WATCH FoE's online forum for details of the announcement. 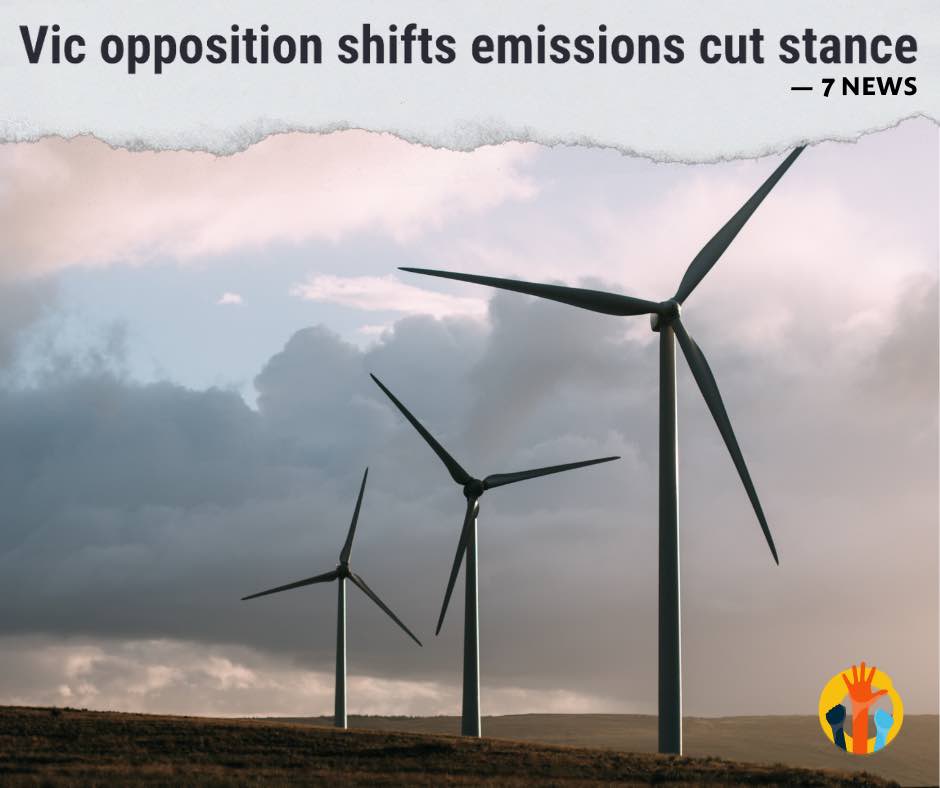 Just weeks after Friends of the Earth and allies sent a sign-on letter to the Victorian Liberal party, the opposition has shifted its position on climate policy.

In early March, The Age reported that the Victorian opposition would commit to net-zero emissions by 2050 and that "the Coalition will support the government's plan to cut greenhouse gas emissions by 50 per cent by 2030."

While the announcement is a welcome first step, the opposition is lightyears behind the Victorian government's climate agenda and what the science demands.

Many in the community will remember the Baillieu government's poor track record on climate and renewable energy. The Coalition's decision to gut the Victorian Climate Change Act and impose extreme restrictions on wind farms cost us over half-a-decade of time to tackle the climate crisis.

Given its record in office, it's no surprise that several supporters have expressed scepticism about the Liberal party's new commitments on climate.

We have written to Matthew Guy to confirm the opposition will uphold the Climate Change Act in its current form and request more details about its plan to meet Emissions Reduction Targets. Stay tuned for an update... 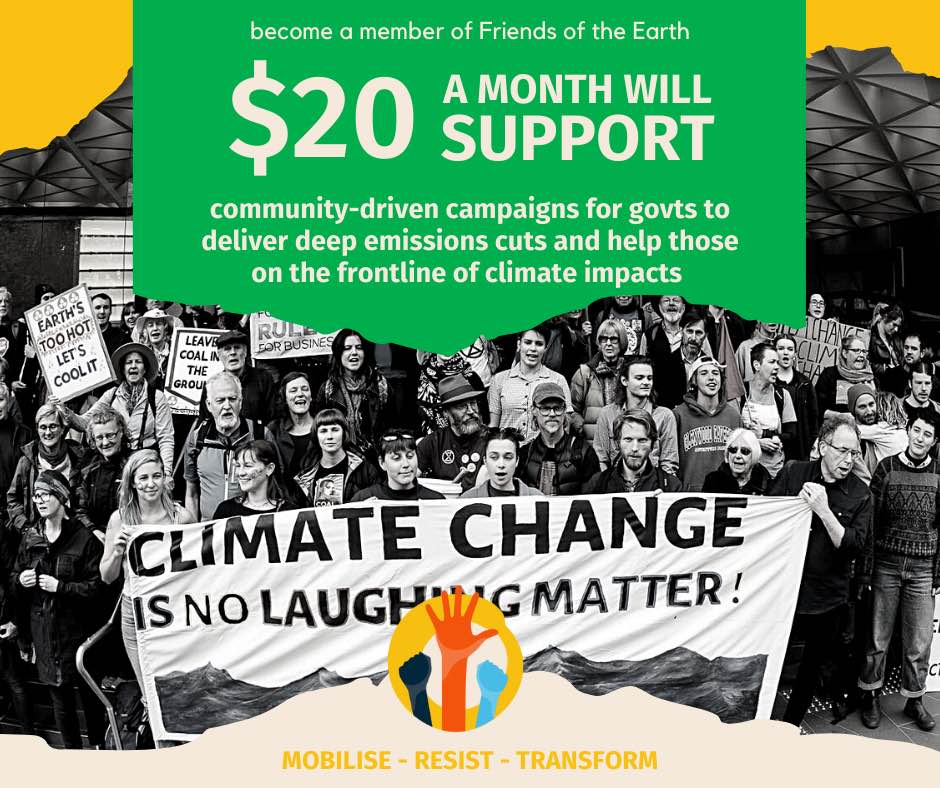 SUPPORT ACT ON CLIMATE BY BECOMING A MEMBER:

Lastly, as you know, the Act on Climate collective have a huge amount of impact on shoe-string budget.

You can count on us fighting hard to for a plan for Victoria to smash its target of halving emissions this decade; a science-based Emissions Reduction Target for 2035; and government support for workers and communities on the frontline of climate impacts.

If you like our work and would like to keep Anna Langford, Jarred Abrahams, Leigh Ewbank, and the Act on Climate collective on deck, then sign up as a Friends of the Earth member today.

The climate justice events calendar for April and beyond is taking shape. We'd love to see you at the following: