The Community and Public Sector Union (CPSU) has teamed up with Friends of the Earth and RMIT University for the Climate Impacts at Work project to investigate how climate change is already affecting workers. We interviewed CPSU delegate Mark about his experiences. 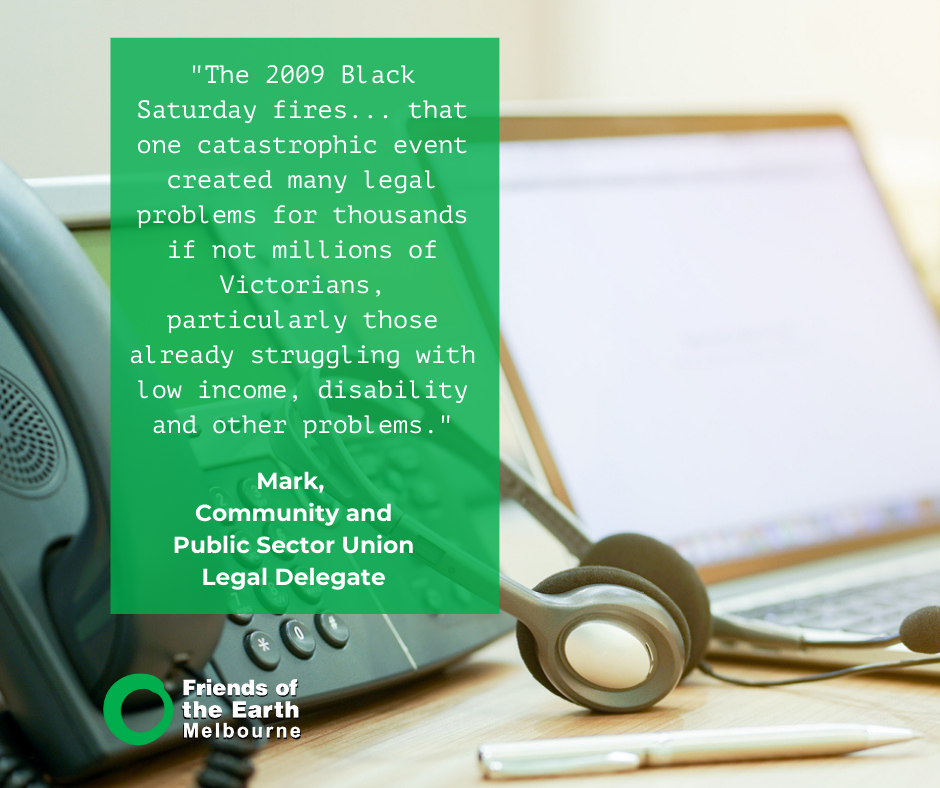 How long have you been working in your industry?

Variety. I’ve learned over my career that I care about variety more than almost anything else. I get to prepare and give presentations, research the law, make videos, help people and lots more. Also the people I work with, whom I love – and share many values with. I like the mixture of teamwork and autonomy too. I’m very lucky to have work that gives me so much.

What concerns you most about climate change?

It’s hard to put that into words. The closest thing I can think to compare with my fears around climate change are when I was a small boy and I heard about nuclear weapons and nuclear war. Back then there were many books and movies that terrified me- I was so worried about the whole world being destroyed and everyone I know dying. The climate crisis is happening more slowly than a nuclear war, but it’s just as frightening. Whole countries could disappear under the ocean. Species extinction is accelerating. Storms, fires, floods, and heatwaves will get more frequent and more severe. I’m frightened most of all for the world’s poor. They will take the brunt of this, there will be so much suffering, and so much death. To me it’s a moral imperative that myself and everyone else in wealthy countries should take climate action to try and help them as much as we can before it’s too late.

How have you experienced climate impacts at work in your industry?

Australia is getting hotter, and it was already very hot! Pre-COVID I noticed getting to and from work in the heat was more difficult, and public transport was having problems coping with the heat. Lately, I’m noticing working from home in the heat is more difficult than working in the office, because my home aircon is not as efficient as the office aircon.

I know there are more indirect impacts, but they are harder to see clearly. Our low-income clients are very affected by the heat. At community legal centres and working on the phone line I could see the emotional effect that heat has on clients to think carefully and regulate their emotions.

I began working in legal assistance because they needed extra staff to work on what was then called the “Bushire Legal Help Line”, after the 2009 Black Saturday fires. That one catastrophic event created many legal problems for thousands if not millions of Victorians, particularly those already struggling with low income, disability and other problems. That service is now called the “Disaster Legal Help Line” and services people affected by bushfires and other climate-affected events like floods, storms, hail etc. The human and financial toll of just one of these events is enormous and combined effect of years is so large it’s difficult to conceive.

What do you think employers in your industry could do to address climate change?

Probably the main thing my employer could do is talk about it more. I know that climate change is predicted to significantly increase the number of refugees in coming years, for instance, and we have a program to help refugees. So, we should be stating that in our internal and external communication.

My employer should explicitly link climate change to the increased need for legal services, through its communication around the Disaster Legal Help Line.

Otherwise, I think my employer should be taking action to lower the organisations emissions and be communicating internally and externally about their plans to do so, what actions they’re taking, and be accountable to how they’re progressing with those plans.

What do you think governments should do to address climate change?

A lot! Australia, particularly after COP26, now has a reputation as a global climate pariah. We are one of the worst countries in the world for failing to act on climate change. Worse than that, the Australian government has actively tried to stop other countries from acting on climate change, through interference and stalling tactics with global treaties. That needs to change.

Australia needs to set an emission reduction target based on the current climate science – something neither the government nor the opposition has done. It needs to accompany that with a detailed plan on how it will be achieved and legislate it.

This needs actions from state governments too. State and federal governments need to stop pursuing new gas and coal mining projects immediately and phase out the use and export of coal and gas as soon as possible. They need to make massive investment in the renewable energy sector and help transition Australia’s motor vehicles towards EVs. They need to have a just transition plan to transition workers in the fossil fuel industries to renewable energy and other industries fairly.

CPSU members can take the Climate Impacts at Work survey through the member portal of the CPSU website.