Act on Climate update: March is a month of action!

With a Federal election in months and a state election in November, Act on Climate are hitting the ground running to hold the Morrison government to account and secure stronger policies here in Victoria.

In the wake of devastating climate-fuelled floods in Queensland and northern New South Wales and another sobering IPCC report, we're calling for community members to channel the rage into action.

Let's make March a pivotal month of action that will help the climate movement build momentum and have impact this year.

Here’s a quick update on our efforts in February and upcoming actions... 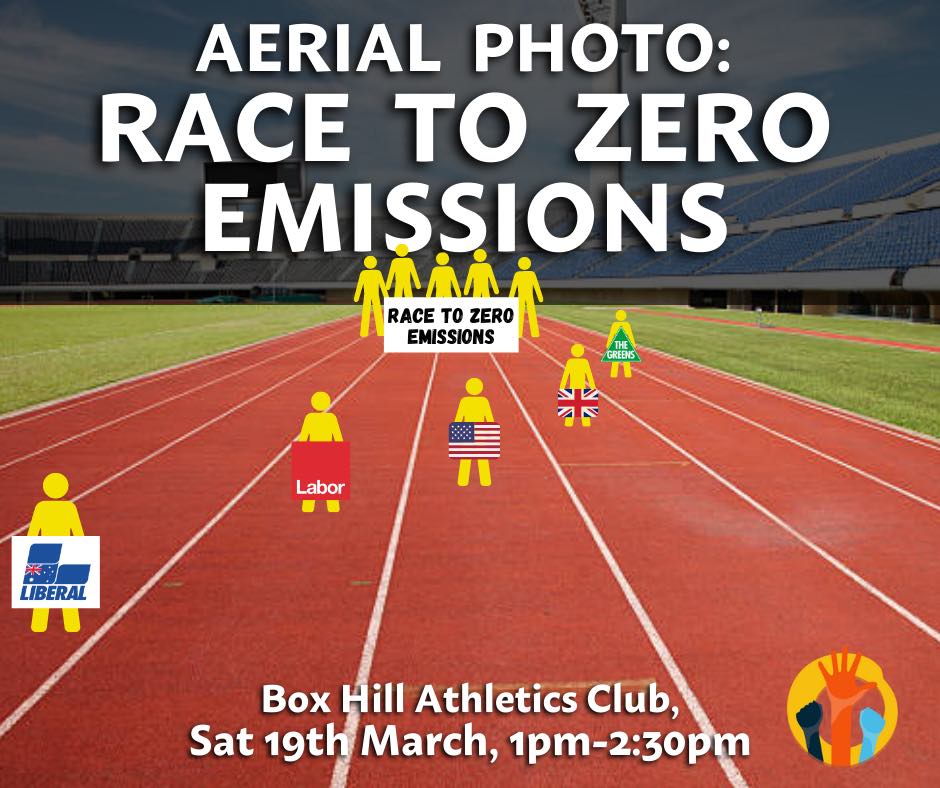 Friends of the Earth are known for organising big and bold actions to put climate on the political agenda.

We're kicking off 2022 with a creative action to send a strong signal to all political parties: When it comes to tackling the climate crisis, we’re in a race to zero emissions.

At 1pm on Saturday the 19th of March, community members will gather at the Box Hill Athletics Club for a choreographed aerial photo.

We will use the 100-metre-sprint track to mark where each political party stands in the race to zero emissions.

The Morrison government's 26-28% emissions cut by 2030 would be represented by standing on the 26-metre mark (and so on for each party). A big crowd at the 100-metre mark will represent the community’s call for zero emissions ASAP.

The images will be used in posters and flyers, and hopefully featured on the nightly news.

It will be a great afternoon with the family too, with some fun activities for kids, food and coffee carts. The event will be an opportunity to meet other people who support greater leadership on climate.

REGISTER now to help us build the numbers. 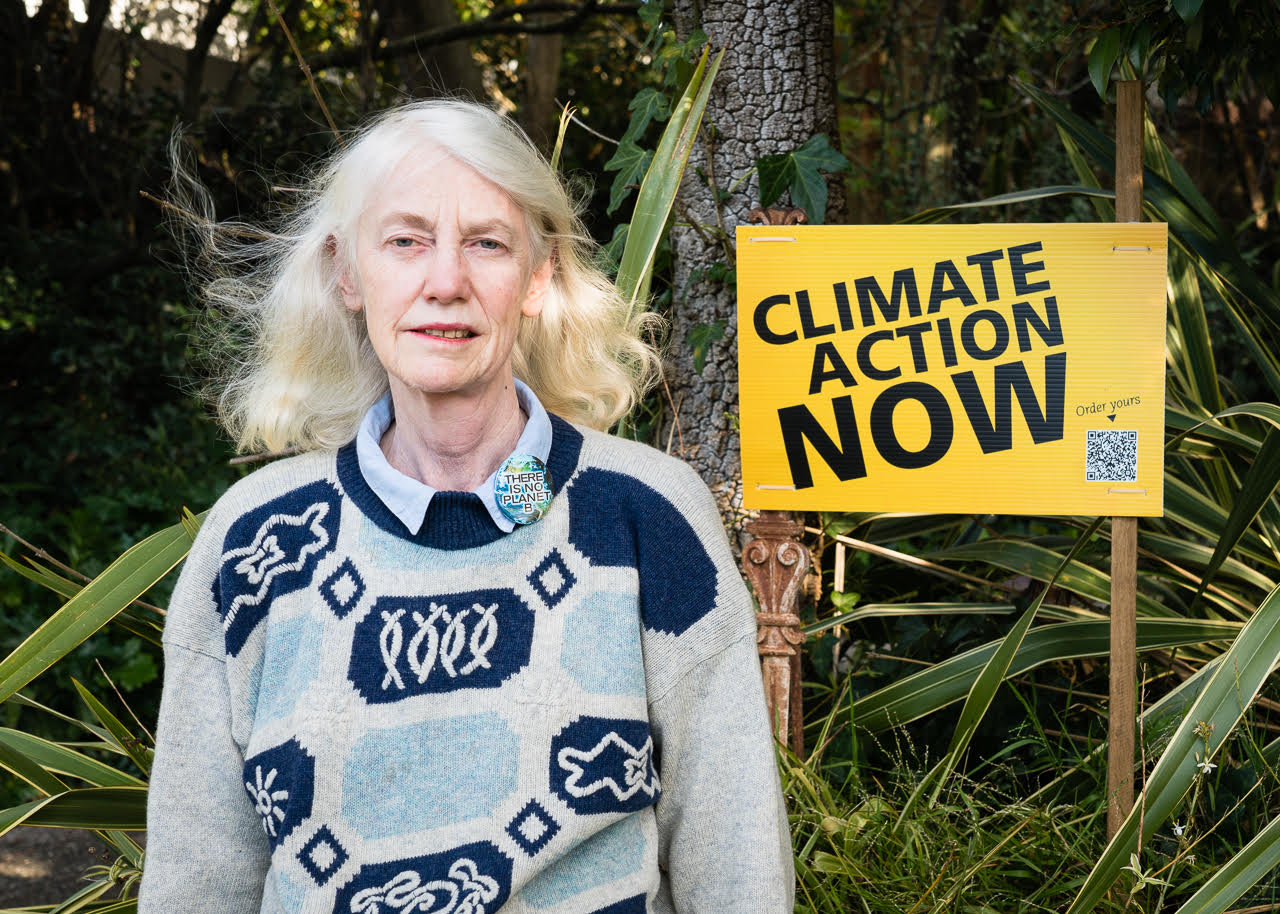 Community members in the eastern suburbs of Melbourne are getting organised to fight for climate justice. In recent weeks, we've seen community actions in Box Hill, Syndal Station, and at the electorate offices of Federal government MPs Gladys Liu, Dr. Katie Allan, and Treasurer Josh Frydenberg.

Liz Reen of Mont Albert is one of the many community members who has stepped up to call on the Federal government to increase Australia's 2030 climate target.

Liz and her community raised their voices ahead of the critically-important COP26 summit in Glasgow. They’re continuing the fight for stronger targets ahead of a Federal election and COP27 summit in November—where Australia is required to announce increased ambition.

Act on Climate caught up with Liz Reen for a chat about the community’s campaign and upcoming Climate Signage Blitz.

FRIENDS OF THE EARTH PUT CLIMATE ON THE AGENDA EARLY IN STATE ELECTION YEAR: 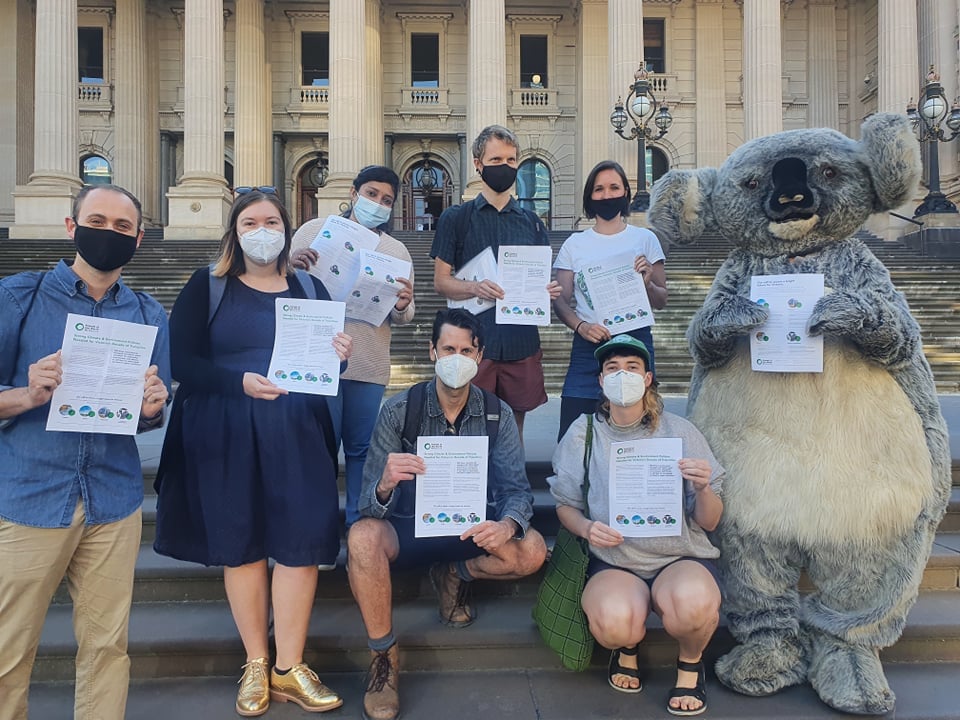 Act on Climate joined Friends of the Earth campaigners and Cranky the Koala at the Victorian Parliament on the first sitting day of 2022.

We handed out copies of our policy platform to Leader of the Opposition, Matthew Guy; Ministers Ben Carroll and Shaun Leane; Victorian Greens MPs, and others, urging all parties to commit to stronger climate policies.

In 2022, Act on Climate will defend the gains achieved at the state level and press the government and opposition to ramp up efforts to tackle the climate crisis.

We got started by celebrating the fifth anniversary of the vote to strengthen Victoria's Climate Change Act and used the occasion to write to the opposition and newly appointed shadow minister for climate, James Newbury, calling for a commitment to uphold the act and deliver state climate targets. 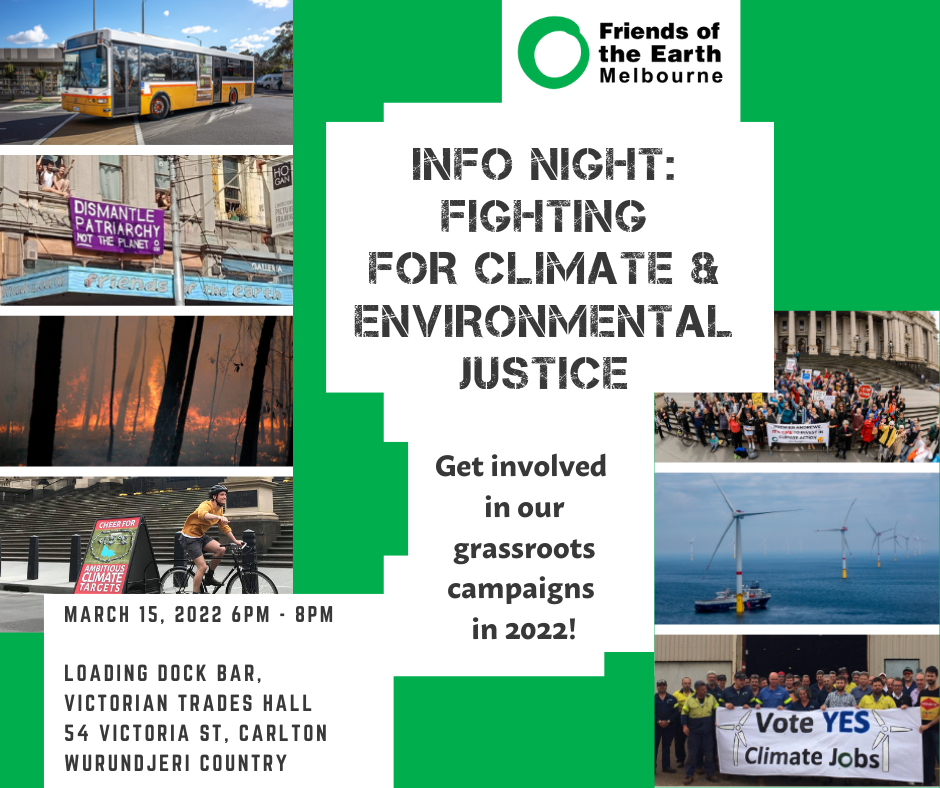 Want to get involved in the fight for climate justice and environmental protection?...

Then join Act on Climate and Friends of the Earth campaigners on Tuesday 15 March for an info night at the iconic Victorian Trades Hall in Carlton.

With both a state and federal election approaching, 2022 is going to be a crucial year for our climate, communities, wildlife, and the places we love.

There's a lot of work to do to secure strong policies to tackle the climate crisis, drive a just transition, and protect ecosystems, so join us on 15 March to hear about our campaign strategies and get involved. 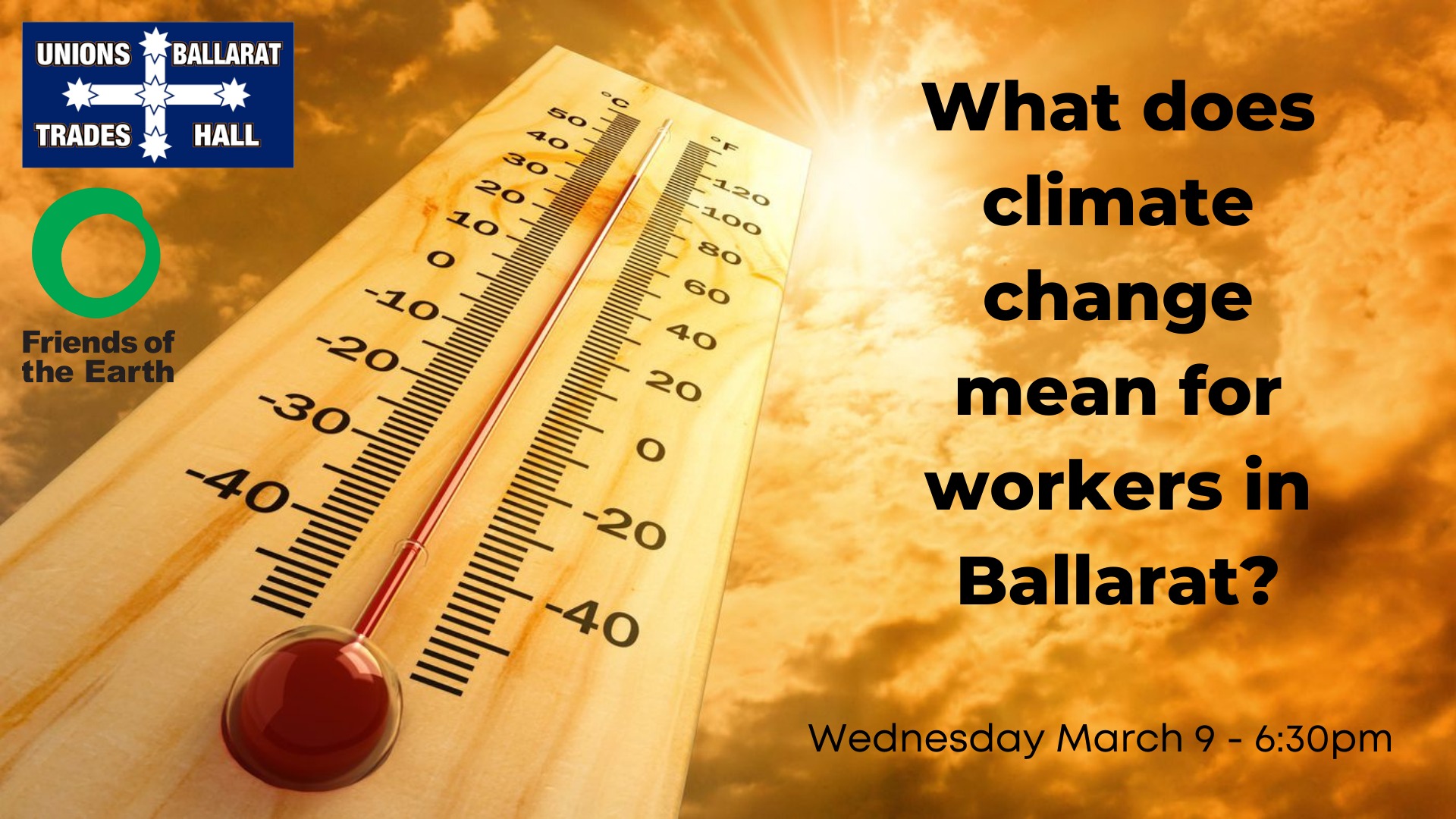 Attention all Hospo, Retail, Fast Food, and Health Workers: Today marks the two-week countdown to the close of the Climate Impacts at Work survey.

Do you know the pain of waiting tables outdoors or working in hot kitchens during heatwaves? Has your health and safety, or that of your client, been at risk during extreme weather events like storms and bushfires?

Tell us about your experiences of climate impacts in the workplace by taking the survey relevant to you here and sharing it with your coworkers.

And if you live in the Ballarat region, we'd love to see you at an event we're holding with our union comrades at the Ballarat Trades Hall on Wednesday 9 March, 'What does climate change mean for workers in Ballarat?'.

REGISTER to let us know you're coming. 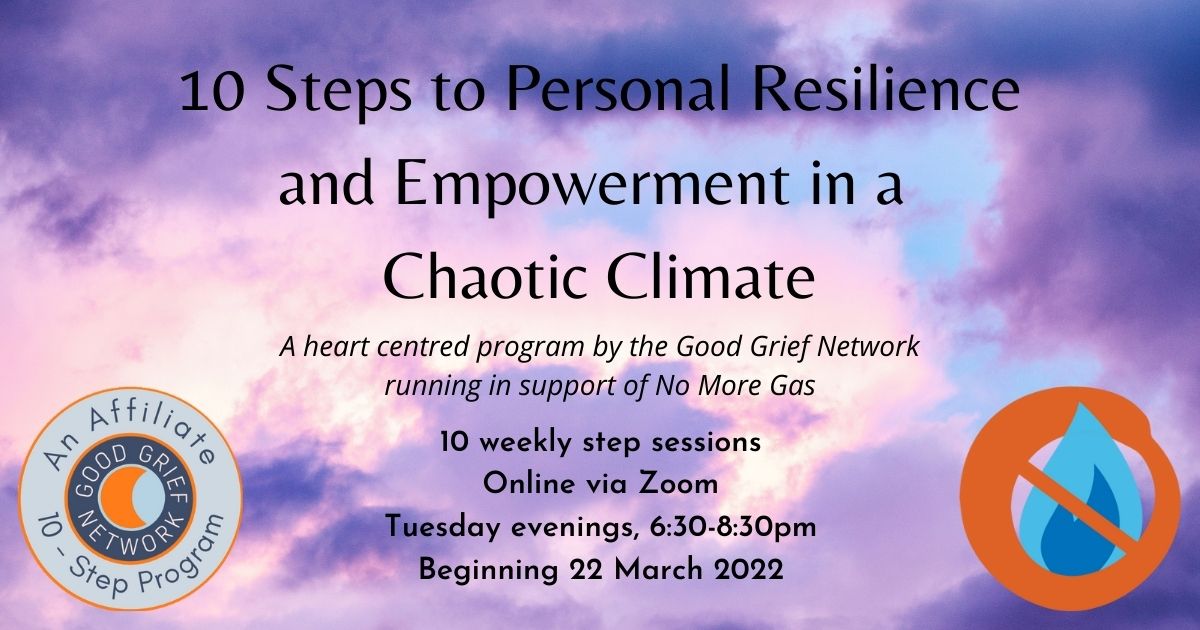 Climate grief, eco-anxiety, despair, dread, overwhelm, paralysis, guilt, frustration, anger... These are just some of the heavy feelings that can be evoked by the systemic predicaments we find ourselves caught up in.

The Good Grief Network program, "10 Steps to Personal Resilience & Empowerment in a Chaotic Climate," creates a space for us to lean into and move through painful feelings about the state of the world together so that we may continue our work for a better future.

Join the sessions to share, be heard, and listen, to deconstruct cultural narratives, build skills and knowledge, and reorient towards meaningful efforts while growing resilient communities.

Places are limited so BOOK NOW.

The climate justice event calendar is chock-a-block in March. We'd love to see you at the following: