On May 28 2022, Friends of the Earth revealed that a number of koalas had been killed at Mount Richmond National Park in Victoria’s south west during a burn off carried out by the Department of Environment, Land, Water and Planning's (DELWP) Forest Fire Management Victoria (FFMVic). FoE witnessed two unfortunate animals that were incinerated and another one suffering from burns. Another burnt koala had been found by carers on the evening of May 27. The two burnt animals were unfortunately euthanised.

A flurry of media occurred, meaning that FFMVic had to undertake a defensive public relations strategy

Friends of the Earth compiled a report on the incident which was sent off to the Office of Conservation Regulator (OCR) and DELWP/ FFMVic. 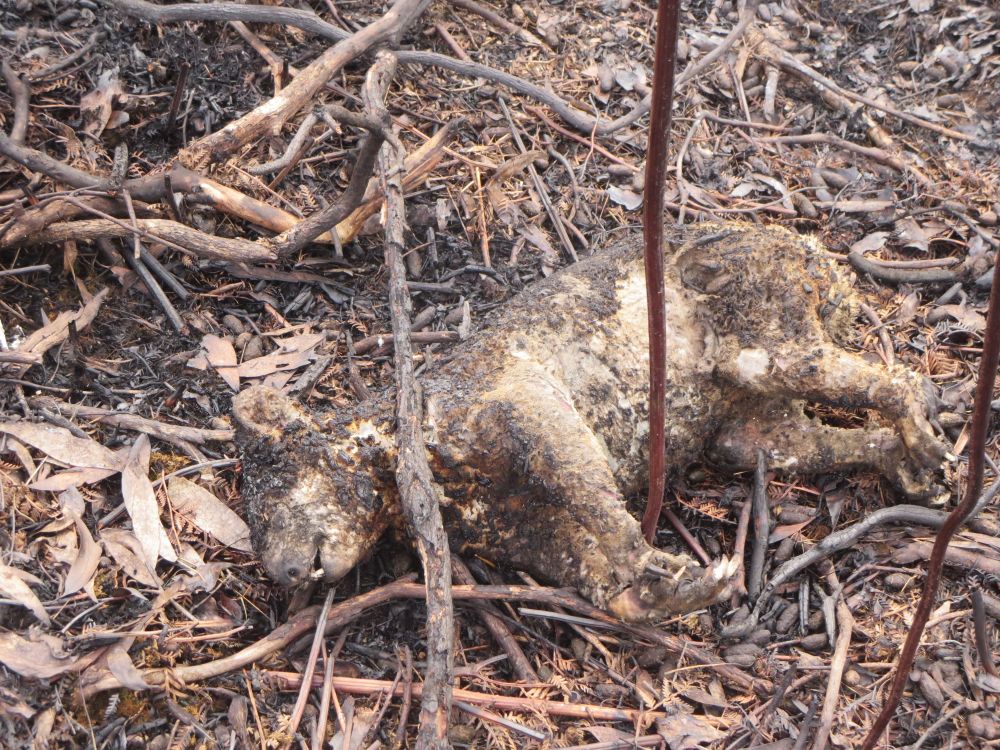 Responses from the OCR and DELWP highlight that there is essentially no independent regulatory oversight concerning wildlife impacts from burn offs that can occur in Victoria’s most significant ecological areas. Eg National Parks.

According to the OCR response:

“The Conservation Regulator does not have a role in regulating planned burns conducted by the Department of Environment, Land, Water and Planning under the Forests Act 1958.

The role of the Conservation Regulator role in fire prevention, referred to in its Compliance and Enforcement Policy, relates to reducing risks from unauthorised and poorly managed campfires.” 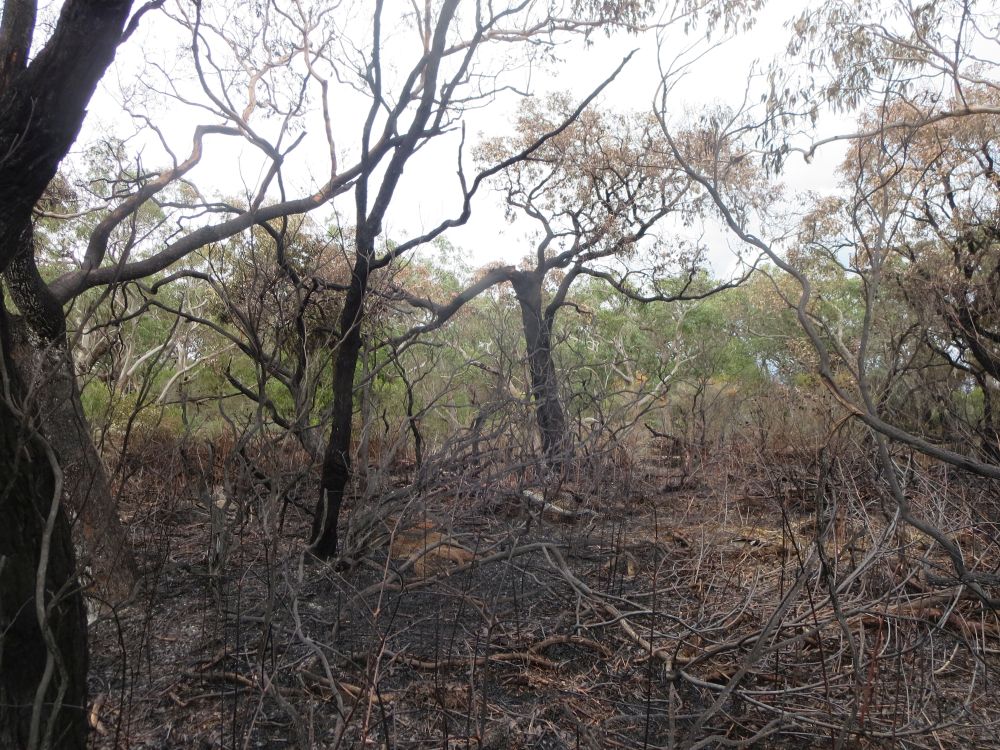 The site where a male koala was incinerated at Mount Richmond National Park. Prior to the fire, most of the scorched area would have been dominated by Coastal Wattle.

In May 2022, FFMVic scheduled a burn at Bridgewater Track to tackle overgrowth of coastal wattle contributing to fuel loads and affecting the koala habitat in the area. The overabundance of coastal wattle is making it difficult for a range of plant species, including the manna gums to reseed and regenerate. These gum trees are the primary habitat for koalas in this area.

A burn was ignited on 23 May at Mount Richmond as part of the Far South West Joint Fuel Management Plan 2021-2024. Before the burn, a values assessment confirmed the site was home to koala habitat trees and several areas of winter sun orchids. The winter sun orchid sites were wetted down and patrolled, and following a site check no koalas were found to be present within the burn area.

On day two of the burn two koalas were observed. Crews were instructed not to ignite under habitat trees and a wildlife officer was on call during the burn. The crew carried out a mosaic burn with different levels of intensity and burnt approximately 60% of the target area leaving corridors and a patchy landscape which also creates informal ‘escape corridors’ for koalas and other animals. The two koalas were monitored throughout the burn and were not affected by fire".

(* Note that FoE visited the burn area on Black Waterhole Track on May 28 and rang the alarm about the incident that same evening. DELWP not only failed to find injured and burnt koalas in four days following the fire, but only did so two days after the incident was reported by FoE. One has to ask the question where else have these wildlife incidents been occurring during and after burnoffs across the state and how diligent are DELWP in finding wildlife pre-burning and finding injured wildlife after burning)?

"In the days after the burn FFMVic crews patrolled the burn perimeter and did not find any injured wildlife. On Monday 30th May and Tuesday 31st May crews were deployed to further inspect the burn site. Crews located two dead koalas and seven healthy koalas…

Trained wildlife officers conduct checks before and after planned burns and are on site during the burn. FFMVic is disappointed we did not locate all koalas in this instance.” 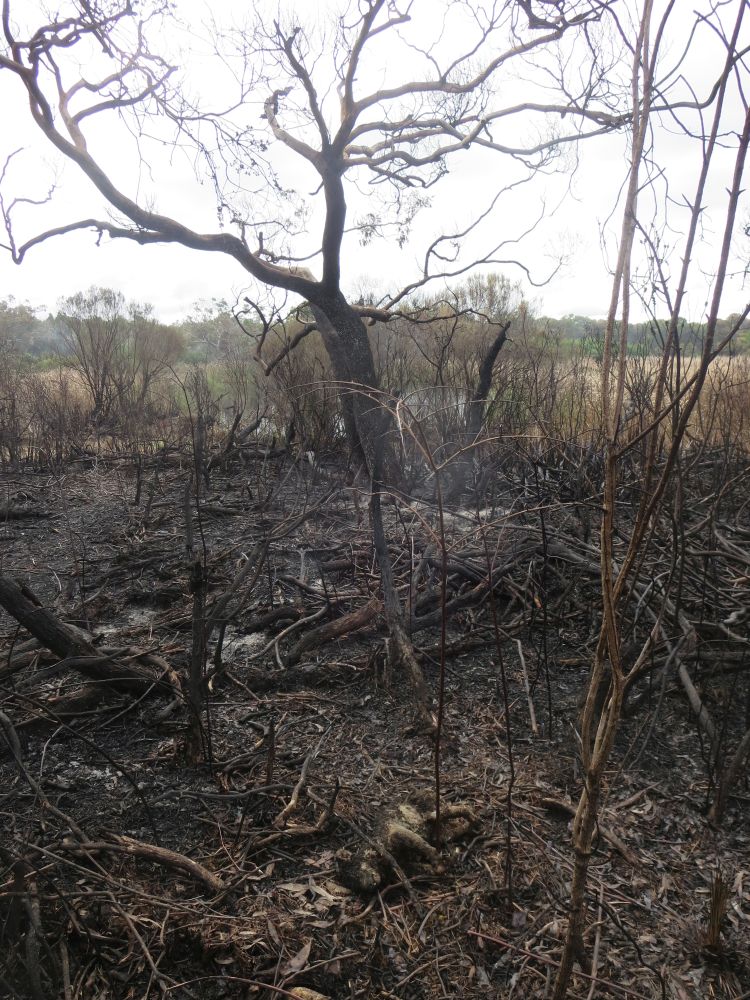 The site in the Mount Richmond National Park where the incinerated burnt female was found.

What neither the OCR or FFMVic explain is that there are laws that would normally apply to the death of animals, eg the Wildlife Act, Prevention of Cruelty to Animals Act and Planning and Environment Act. Why is statutory compliance not seen to be of significance in the case of animals killed during burn offs? Disappointment only from FFMVic is definitely not a good enough response.

It would appear that there has been an abject failure to undertake due diligence and that the koala deaths caused by the burn offs were possibly deliberate, negligent or incompetent. No review process appears to be in place, to make sure such events to do not happen again. The whole incident seems to be swept under the carpet.

It is bizarre and confounding that the OCR has issued legal charges including animal cruelty in regards to the infamous koala massacre near Portland that occurred in February 2020 and is currently investigating the deaths of at least 16 koalas in a timber plantation near Hamilton, yet claims that it is unable to investigate koala deaths carried out by State Government employees in a burn off in a National Park in the same region.

There is also clearly an issue regarding a conflict of interest, where OCR is part of DELWP, but that it was DELWP/FFMVic that undertook the burn and caused the Mt Richmond National Park incident. Effectively then DELWP is investigating itself. Is it no wonder that nothing is likely to eventuate from this incident? The "regulator" is effectively muzzled.

For OCR to be fully responsible for environment compliance with burn offs, it should be set up outside the influence of DELWP. Wildlife in Victoria’s Parks system and elsewhere appear to have no protection if state sanctioned burn offs occur under the existing regulatory environment.

Details of where FFMVic intend to burn throughout Victoria can be found here.

Our SKAT collective is continuing surveys in Mullungdung State Forest. Any donations are greatly appreciated.