Community members are getting organised and making sure political candidates are engaging with the challenge of climate change in the lead up to the Victorian state election. Melissa Abel, a community climate champion from Bendigo, reports on a recent candidates forum in her region:

In the lead up to the state election at the end of next month, our Australian Conservation Foundation community group in Bendigo have been running a series of “Politics in the Pub” events with our local politicians and candidates, focusing on one party at a time. Bendigo is covered by two state electorates – Bendigo East and Bendigo West, and so we've at times had candidates from both. So far we've had Labor, the Greens and the Liberals.

We are yet to lock in a date with the Nationals, but they – perhaps surprisingly, given the topic of climate change – appear keen so far. As a side note, I asked our Nationals candidate at a different forum why they want to scrap Victorian Renewable Energy Target (VRET) and was told that they don't want to see a “piecemeal, state-by-state” approach to energy policy. Call me cycnical, but to me that looks like an attempt to tear down the states that are actually attempting to do something about climate change... 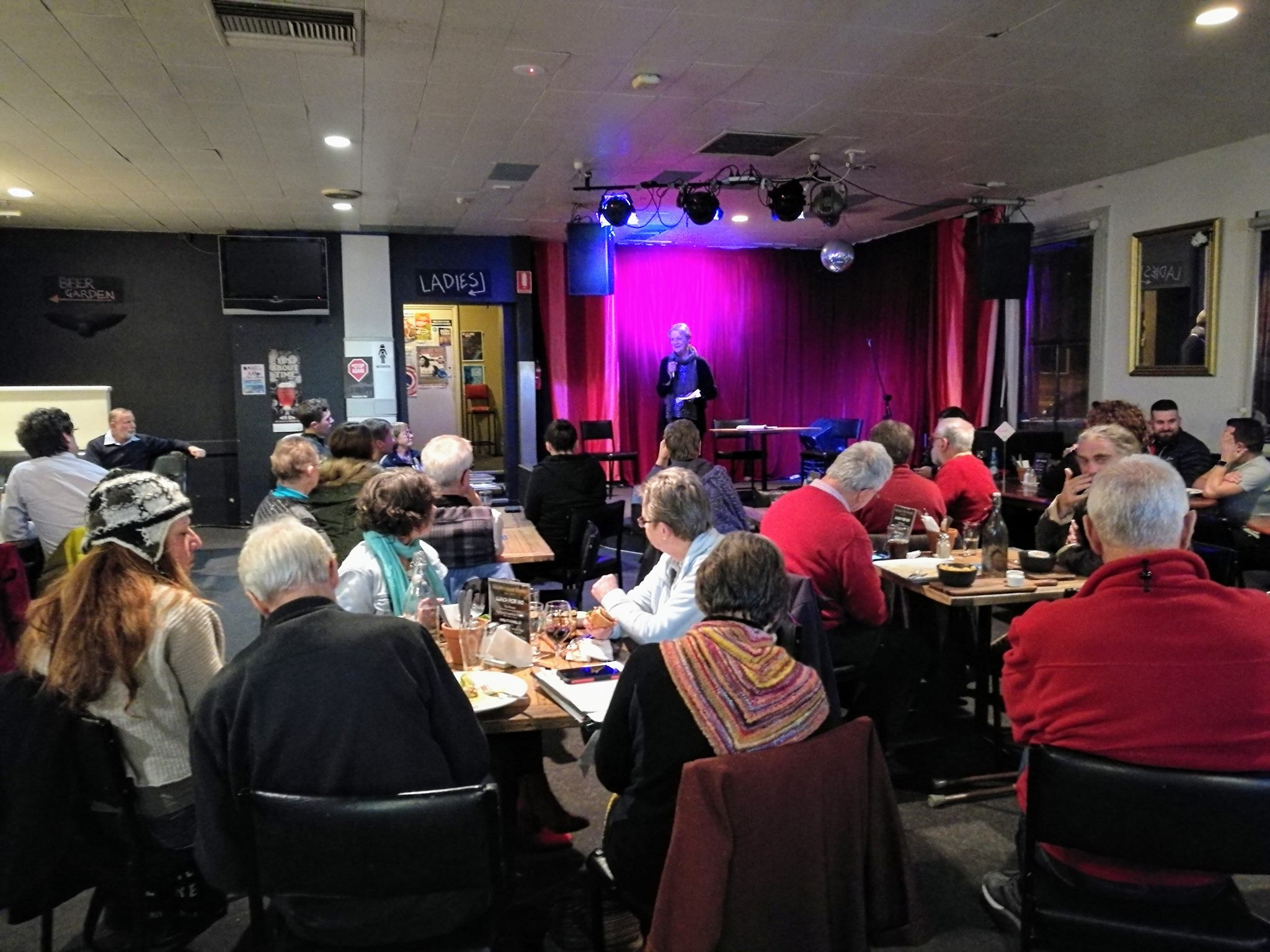 Maree highlighted the fact that the opposition are threatening to overturn the VRET if they win the upcoming election, but she pointed out that this would be made more difficult and time-consuming for them by the fact that it is already enshrined in legislation, and would be a highly unpopular move in the eyes of everyday Victorians. Maree stated that Labor have a target of 100,000 jobs in the climate and renewable energy sector by 2030; she spoke about the Victorian Renewable Energy Jobs Fund being completely overwhelmed with applicants, and the need for it to be retained and increased.

A local uni student asked about the importance of partnerships in addressing climate change, such as those between environmental organisations, businesses and government, which Maree answered by saying how imperative it is that state governments lead the way. She quoted Victorian Labor's target of making all government departments and agencies carbon neutral by 2025, and stressed the importance of TAFEs for retraining purposes in supporting communities through this transition. The Bendigo Sustainability Group's proposal to use the existing mine shafts under Bendigo as pumped hydro storage was quoted by Maree as an example of the state government collaborating with local groups to achieve targets.

There was quite a bit of talk about public transport – the trains are notoriously late coming into Bendigo from Melbourne, with heritage listed tunnels only allowing one lane. While Bendigo is not as isolated as other regional as areas, there is still a high reliance on cars due to the lack of reliable public transport, leading to a discussion around how to reduce our car usage and fund bus and train routes that wouldn't otherwise break even. When asked if we would see incentives introduced for electric vehicles such as we've seen happen in other countries, Maree Edwards simply said she hadn't seen any policy around that yet, but acknowledged that it would be helpful. She also said that electric vehicles will naturally take off as costs become prohibitive for everyday families – it still wouldn't hurt to see some policy brought in to hasten the transition! The Climate Council had done a report just prior to our event on Australia's transport sector, as the second largest source of greenhouse gas pollution after electricity.

Things not surprisingly went rather pear-shaped when coal exports were mentioned, with Lisa Chesters side-stepping the question and saying that there is no alternative for coking coal. This of course is not the only coal we export – Adani's mine, for example, will be producing thermal coal. She raises a good point about the need for investment into alternatives for some of our current unsustainable practices, but there is already work being done around producing stainless steel without the need for coking coal. She spoke about the need for clarity around the facts when it comes to coal, and that we can't simply ban coal exports. She was challenged by a Bendigo ACF member saying that we have a responsibility as global citizens and cannot only focus on decarbonising our own economy – we also need to help the efforts of developing countries, not simply supply them with more coal (not to mention killing them with the resultant pollution). He acknowledged that he wouldn't receive the answer he was looking for though, because if Labor say they will stop coal exports they'll be “committing political suicide.”

The Greens candidates included former Bendigo councillor Laurie Whelan, psychology student Nakita Thomson, and tax lawyer and upper house candidate for Northern Victoria Nicole Rowan. They focused quite heavily on waste and container deposit schemes, at times more so than climate change (one of the candidates is a big zero waste advocate), but of course they are the only Victorian party to have a plan in place to get to 100% renewables. They also spoke about the lack of decent regional public transport, an important campaign issue for Nicole – the electorate of Northern Victoria is huge, covering almost half of the state, and so rail services are a relatively high-profile topic. Previous successes that the Greens were involved in such as the VRET, the closure of Hazelwood and Alcoa power stations, a ban on fracking and a moratorium on onshore conventional gas in Victoria were mentioned by Nakita, who is fiercely proud of the Greens policies and their transparency. 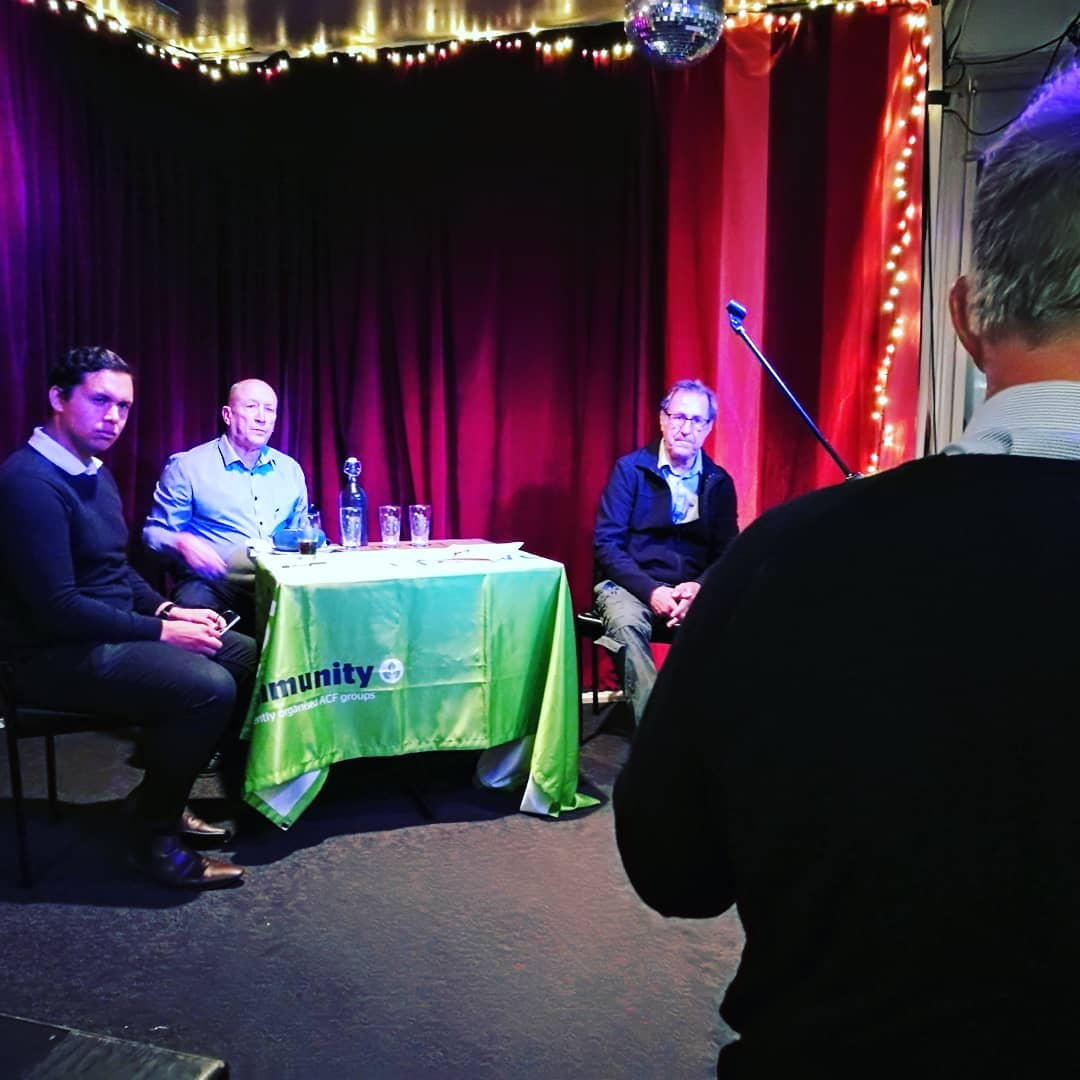 Our local Liberal representatives were candidate for Bendigo East Ian Ellis and part-time federal electorate officer (and recent Journalism graduate) Matthew Evans. I made sure to mention former Liberal party leader John Hewson in my introduction on the night; he's been doing some fantastic work lately around calling out the Liberal party on their climate inaction.

We actually had a very productive discussion around climate change, much more so than I'd expected. The evening didn't get off to a great start when in his introduction Ian launched straight into a discourse about the pollution caused by the building of solar panels, their lack of recyclability, and how producers should have more responsibility for old panels. I did want to try to keep the interaction positive though, and so I tried to be diplomatic when I pointed out that while his thoughts on whole-of-life manufacturing were admirable, perhaps those standards should be applied to industry in its entirety and not just the renewables sector! There was the usual amount of blaming the other major party for errors of judgement, but they acknowledged that climate action does make economic sense and will not take a wrecking ball to the economy as some would claim.

A highlight of the evening was when one of our ACF members asked when we would see Scott Morrison in parliament with a miniature replica of a solar panel, given that the Liberal party are “energy agnostic” as they claimed that evening! The Liberal reps were good sports though, and jokingly offered to provide Morrison with one of their boating solar panels to use as a prop.

The evening ended with Ian even saying that if he was elected he'd push for stronger climate action within the Liberal party, as he is concerned for the future of his young grandchildren. Who'd have thought, these political candidates are real, actual people, with loved ones whose futures they are concerned about! He also stated that he's against the current old growth logging that's happening in the central highlands, putting extreme pressure on critically endangered species like the Leadbeater's possum, the faunal emblem of Victoria. It all slightly restored my faith in Liberal politics – only just slightly though! It also gave me hope to see a young Liberal who was so passionate about the environment and had a history of involvement in sustainability projects.

All of these interactions have been so enlightening and enjoyable; it's important to always bring it back to the fact that these are actual people we are dealing with, with genuine concerns of their own. We can't expect to entice better people into politics if we spend all of our time disrespectfully tearing down those who are currently in power (that's not to say that there isn't a massive problem internally with the major parties). At the same time, it's been a wonderful opportunity for the candidates to have some proper engagement with members of the public about the things that matter to us, and a warning that they will be held to account.