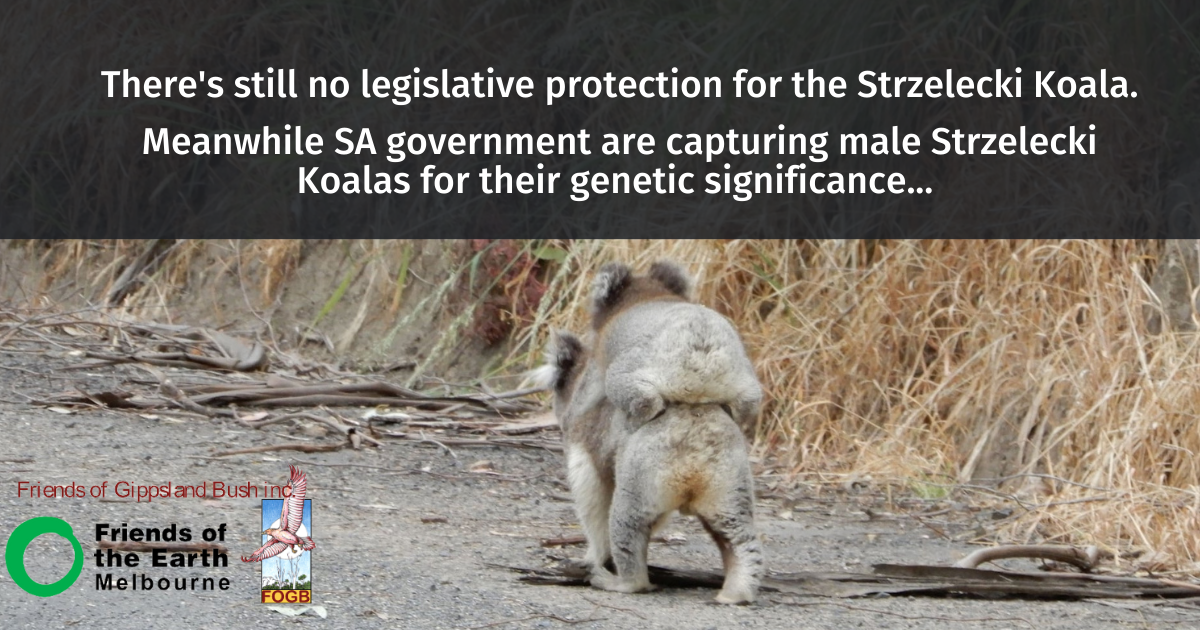 In November 2021, Friends of the Earth (FoE) were made aware of a koala translocation proposal which would involve the removal of an unspecified number of genetically diverse male Strzelecki koalas. Under the plan, the Strzelecki koalas were to be transported over 900 km’s to the Cleland Wildlife Park in South Australia (SA) in an attempt to breed with “chlamydia-free” koalas.

FoE’s queries were answered in mid December by the SA Government only when the relocation plan was already underway. The group leading the translocation plan were a South Australian Government entity called ‘Koala Life’.

As koala numbers dwindle nation-wide, Koala Life are supposedly focused on saving the koala, but at what cost? The intentions of this project are to breed a genetically robust and chlamydia free group of koalas. The idea may appear to have merit, however FoE along with many people in the South Gippsland region are very concerned about the complete lack of communication and ambivalence about what impacts the removal of animals will do to a dwindling koala population in the Strzelecki Ranges. FoE are also well aware of problems associated with translocated koala populations as seen in south western Victoria and SA. Will this translocation plan solve these problems?

When FoE emailed Victorian Environment and Conservation Minister Lily D' Ambrosio asking for clarification regarding the project we weren’t even granted a reply. Some of our key concerns question:

Send an email today to SA and VIC Environment Ministers to share your concerns about this poorly implemented translocation project that overlooks the welfare of the Strzelecki koala which still fails to receive legislative protection?

We have received anonymous tip-offs which continue to raise concerns. Koala capture techniques employed during the project, use a method recommended by DELWP that has not been used in NSW for twenty years and will undoubtedly stress captured animals. Animals are being located by drones on land under the control of Hancock Victorian Plantations. Not all South Australians are happy with the plan which seems to be part of a broader agenda to boost koala tourism in SA. Virtually no work has been done by Koala Life to understand the population of koalas in the Strzelecki’s, with no work being done to better understand the impact of removals on koala social hierarchies, koala boundaries and impacts on the breeding population.

The Strzelecki koala is believed to be one of the most significant koala populations in Australia because of their genetic diversity. Their population size is however uncertain with estimations between 1,500-2,000 animals. They are at increased risk to climate change, logging, habitat fragmentation, car strikes and dog attacks. There is no state or federal legislation in place that serves to protect this unique koala population, yet SA and NSW have recognised their importance through attempted translocation plans. When will the Strzelecki koala be safeguarded by legislation before it's too late and their population collapses?

Strzelecki Koalas to be Relocated to South Australia