Make the Switch to Cooperative Power!

We have made the switch to Cooperative Power! Will you join us? Cooperative Power is a collectively-owned ethical energy retailer that can help us take the power back from polluting and profiteering energy companies.

The History of Cooperative Power

Launching in 2019, Cooperative Power was founded by the National Union of Workers with the help of a New Energy Jobs grant from the Victorian government.

Friends of the Earth is a founding member of the Cooperative Power network, alongside other unions and environment groups. In creating Cooperative Power, we were united by a shared vision for an alternative model to the current privatised, profiteering energy market: a community owned energy provider that puts people before profits.

Since 2019, Friends of the Earth Melbourne's campaigns office, Food Co-op and Cafe, and community meeting spaces in Yalla Birrang / Collingwood have sourced all of our electricity from Cooperative Power. As a customer member, we also get a say in how the profits of the cooperative are distributed.

As a democratically-controlled energy retailer, Cooperative Power's future will evolve according to its membership, both individuals and member-groups. Make the switch today to be part of the Cooperative Power energy revolution! 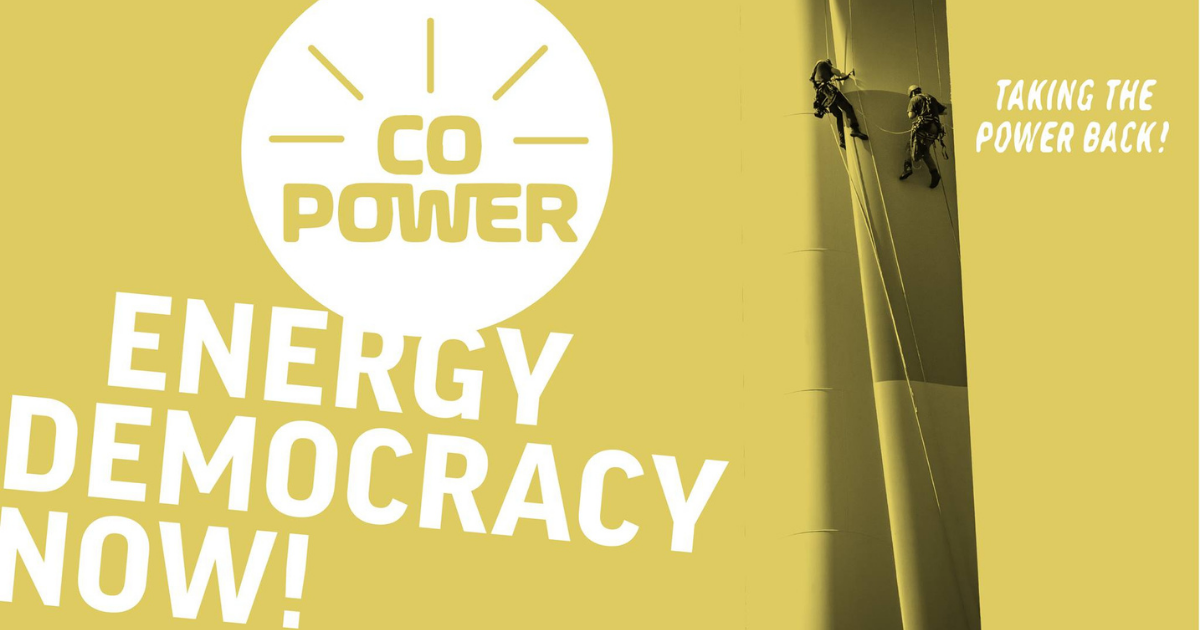 Cooperative Power is the only 100% community-owned and democratically managed energy retailer in the country. Beyond simply being an energy provider, it is committed to advancing work for social and environmental justice.

This vision includes investing in and purchasing community-owned renewable energy, and subsidising the rollout of energy efficiency improvements and renewable energy infrastructure for working-class households. No one, and no community should be left behind in the energy transition already underway.

As part of its structure, Cooperative Power is obliged to reinvest all surplus earned back into community groups and projects - and where this money is distributed is proposed by and voted on by its members.

For example, in response to the unfolding COVID-19 pandemic in 2020, Cooperative Power put 100% of this surplus money into addressing the COVID-19 social crisis in Australia and the Asia-Pacific region.

In the face of Powershop being bought by Royal Dutch Shell...

The recent news that energy retailer Powershop has come under the ownership of global fossil fuel giant Royal Dutch Shell shocked thousands of Powershop customers. Shell has a history spanning back decades of undermining climate action and the credibility of climate science around the world.

We had huge cause to celebrate when earlier in 2021, for the first time in history, a judge held a corporation liable for causing dangerous climate change.

As a result of legal action brought by Friends of the Earth Netherlands (Milieudefensie) together with 17,000 co-plaintiffs and six other organisations, the court in The Hague ruled that Shell must reduce its CO2 emissions by 45% within 10 years. This historic verdict has enormous consequences for Shell and other big polluters globally.

So, it is no surprise that Shell might be perceived to be trying to greenwash its way into the energy market. If, like many others, you don't buy this new look for Shell, you can join many thousands of others who have already made the switch to Cooperative Power today.

Cooperative Power takes the power back from huge energy corporations like Shell, for the benefit of people and our planet.  Their retail product partner - Energy Locals - is in the top three of the Green Electricity Guide for supporting renewable energy.

Here's the link to switch your energy provider to Cooperative Power!