Kranky the koala commemorated National Threatened Species Day (7/9) by rallying and walking in solidarity for our country's declining state of environment with comrades to parliament steps. I as Kranky the koala tried to imagine what a koala may like to share with the crowd, if they could offer an exchange of words on such as sobering day. It went a little like this... 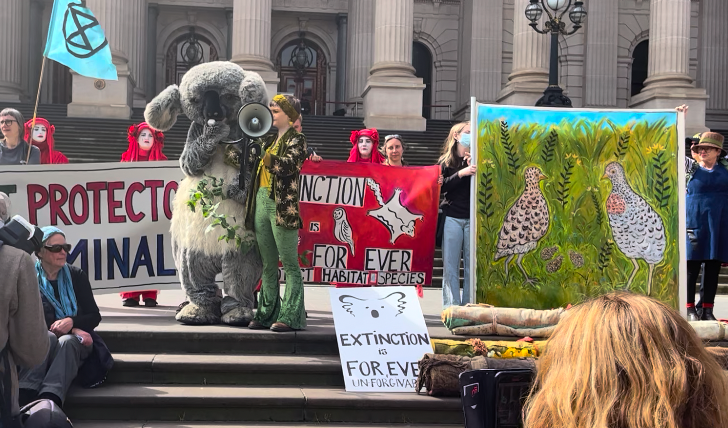 My name is KRANKY the koala, and I’m sure you can imagine why… Today I've roamed over from the Strzelecki Ranges because like you all, I’m here like you, because we are cranky, frustrated and dis-heartened by the state of our environment and our threatened species. We are here, because we are ENDANGER-TOWN and it ain’t no joke.

We Strzelecki’s, are a small population of 2,000 or so koalas that miraculously survived the colonial-enforced hunting expedition which almost summoned extinction to koalas in so-called Victoria in the 1920’s. Back then, the Strzelecki Ranges were not kind to settlers or farmers with their steep and tall ridges, many people had abandoned their properties, perhaps this is why we survived.

It’s important to know that most koalas in Victoria originate from a handful of koalas that were moved to French island by a fisherman in the late 1800’s. However, unfortunately, as the gene pool was very limited, these koalas experienced a genetic bottleneck and their own set of challenges. Most koalas across Victoria are the result of these translocated island populations which have comparatively lower genetic diversity which may affect their long-term survival.

Since we survived the hunting expedition, an unwelcome neighbour came to town, this was as I call it, the graveyard for trees. The largest paper-mill in Australia came to operation in Maryvale from 1937, and apparently they have the right to continue to clear-fell our native growth forest for another 8 gruelling years. What about our right to live in our home? Old growth, bloody oath. [crowd begins chanting - old growth, bloody oath]

The most recent fire in Yinnar south in early 2019 burnt out almost ¼ of our habitat and as we know across the country, these fires are only intensifying. When our environment is stressed, so are we, which can make us more susceptible to disease. Quite a few of us are now climate refugees, as we have been displaced from our preferred habitat trees. This means, we are in search of new food, and sometimes we journey across paddocks, fences, buildings and roads. I have to be extra cautious when I’m on the move at night. Those long, black, snake-like things you call roads, can be a scary place to be, especially when you see those bright lights zoom by. Whilst I’m lucky to get away unscathed, just down the road I see my comrades that didn’t make the crossing in time, and lately I have seen a lot of wombats and wallabies.

It may appear that the odds are not in favour for us koalas, with increasing pressure on our land, our future is at threat. But it’s not just us, Swoopy the greater glider has become increasingly harder to get a hold of, and I hear less of Sooty the powerful owl. The sounds of the forest have been suppressed, but for how long? I’m worried, for the day that I bear offspring, I don’t want them to come into the world accepting the scarred forest as they see it, I hope that one day they will see the natural abundance and riches of biodiversity that I grew up around.

Kranky was also joined by many other koalas including the groaning and decaying Blinky bill. Photo credit - Anne Abbot.

Once, when I was snoozing away in my favourite Mountain Grey gum, I awoke to sounds of excitement as I saw a group of forest-protectors make a record of my fresh droppings, who would’ve thought people would get so excited over my crap? It was as if, they were looking for gold! Apparently they were making a map for us to monitor our presence. Down the tree trunk, I also heard of the upcoming Strzelecki koala festival in Moe mid-October being organised by people we call guardians of the forest - they often go by the names of activists, advocates, vets and carers and they help to protect and nurture my injured or sick friends. I hear of university students and local residents eager to learn more about how to protect our future. I hear of community groups lobbying for the return of land occupied by timber harvesters into a protected reserve. I hear of people planting koala-friendly trees and re-vegetating their backyards. Some say, if you grow it, the wildlife will come back.

The SKAT team at Friends of the Earth will pledge to extend a reserve boundary in Mullungdung Forest due to high presence of koalas and endangered greater gliders. Friends of Alberton West have flown thermal drones across forests of concern to monitor the greater glider, and the forest collective are considering ways to carefully transition the forestry industry. Community efforts play a key role in propping up our environment, but when will the government rise-up, empower and back community-led initiatives by helping to fund research and advocacy so that our environment is a first-thought rather than an after-thought.

If interstate governments can recognise the genetic diversity of the Strzelecki koala than when will the Victorian government? Why do governments wait until crisis point before they pull the trigger on so-called recovery plans? The Strzelecki koala has been nominated to the federal EPBC as a way to receive some legislative recognition for protection but an outcome is yet to be heard.

I must ask a question to the government as a lot of our problems are rooted in colonialism, capitalism and extractivism. These systemic issues are interwoven and complex. Are we willing to inherit these colonial-rooted injustices, or can we up-root from what we know, and re-seed the importance of the environment and grow back our threatened species?

Tune in to our monthly collective meetings, if you are inspired to get active and involved in helping us advocate for the protection and future for the Strzelecki koala before they join the list of threatened species list.