The long road to healthy land and water 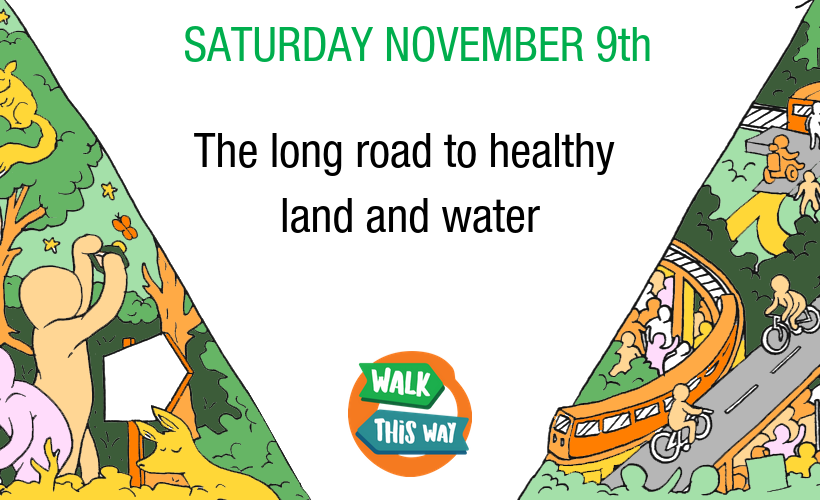 The story of the Merri Creek begins more than 4.6 billion years ago, as its pathway was eroded through sandy sediments left behind by a receding sea. From 4.6 to 0.8 billion years ago, lava from volcanic eruptions flowed down the Merri and Darebin creek valleys, along the Yarra to the Yarra to the CBD. The remains of these lava flows are still evident.

(Comparatively) more recently, the Merri Creek was inhabited by the Wurundjeri-willam people, and scar trees and other important artifacts remain along its trajectory. Once a thriving ecosystem, it sustained the Wurundjeri-willam with bountiful eel, murnong, shellfish, ducks and nearby kangaroo and emu.

Sign up to Walk This Way today and hear about the origins of Friends of Merri Creek from one of their members on our walk along the Merri Creek.

Healthy ecosystems and healthy rivers need water. The Merri Creek and its tributaries are home to rare habitats including shrubland, wetlands, plains and grasslands. Friends of the Merri Creek work hard to protect the biodiversity of these ecosystems, planting, surveying, and testing water quality.

The Merri Creek is only one of many waterways that have suffered since European invasion. Friends of the Earth Melbourne’s River Country project came after a successful 15-year-long struggle in alliance with First Nations and other green groups for the formation of the Barmah-Millewa National Parks. The 185,000 ha Murray River Red Gum Park was established in 2010 with co-management of the park to be between State Governments and the Yorta Yorta Traditional Owners. New National Parks and Regional Forests were created after a Victorian Environmental Assessment Council (VEAC) report found that 75% of Red Gum trees were ‘dead or dying’.

Since then, the River Country Campaign has continued to work collaboratively with traditional owners seeking co-management along the Murray River. The campaign has also worked to improve policy and funding for Indigenous Protected Areas, on capacity-building projects with local communities along the Murray, and on on-ground surveying, threatened species and weeding work.

The impacts of unsustainable agricultural practices are increasingly being seen through soil erosion, pesticide use, land clearing and unsustainable irrigation. The poor condition of the Darling demonstrates the impacts of failed water management, unsustainable crop selection and over-extraction of river water.

The collective and community are calling for a stronger Murray Darling Basin Plan, sovereign rights and co-management of land and water for Traditional Owners, and a stop to floodplain development in redgum forests, lakes, and wetlands. Walk This Way will raise vital funds for Friends of the Earth - get walking to support campaigns like River Country continue to fight for the health of Victoria’s river systems.

The Merri Creek has undergone many changes since European invasion. It had a close shave in the 1970s when Government engineering agencies planned to concrete line the creek and build a freeway alongside it from Clifton Hill to Craigieburn. In response to this threat, a coalition of community groups and local councils formed the Merri Creek Coordinating Committee. This later evolved into the Merri Creek Management Committee and Friends of the Merri Creek.

FoE Melbourne’s Sustainable Cities Collective has big shoes to fill as it continues the long-running, cross-generational campaign for better public transport in place of mega roads. In the ‘70s, it was MCCC and the Merri Creek proposal; in the ‘90s it was CAFE (the Coalition Against the Freeway Extension), campaigning against an extension of the Eastern Freeway; and as recently as 2013-14 a coalition of community members and organisations (some of whom, including FoE, had also been members of CAFE) collaborated to stop the East-West Link.

The mega roads may be different, but the messaging is much the same. In 1995, Green Left Weekly reported on the CAFE campaign:

“CAFE wants the government to build a rail link to the eastern suburbs instead, as was recommended in a 1988 report commissioned by the state government. CAFE has pointed out that building roads, rather than less polluting public transport alternatives, only increases the volume of traffic and congestion.”

“Our trains, trams and buses are overcrowded, infrequent and unreliable, poorly maintained, leaving 75% of Melbournians forced to drive to work, sitting in traffic jams and paying huge amounts in tolls and parking. Experts keep telling us that more roads don’t reduce congestion; they create it.”

The transport sector is the second-largest and fastest-growing source of polluting greenhouse gas emissions in the state.  Continued investment in mega roads locks in decades of polluting road-based transport and compromises funding towards sustainable transport options; it increases geographic socioeconomic disparity, forcing those residing in lower socioeconomic areas to rely on road-based transport options, leading to greater risk of isolation, lack of access to essential services, and increased poverty; it increases our already dangerous levels of air pollution (a 2014 report from Environment Justice Australia found that 3,000 Australians die prematurely from air pollution every year); and of course it causes untold harm to the environment.

One of the necessary pathways forward, though evidently not a new concept, is investment in public transport. projects such as MM2, the Suburban Rail Loop, and the Airport Rail Link would transform our city. They would position Melbourne as being ready for a climate constrained future, take many thousands of cars off the road, improve air quality, decrease the incidence and costs of road accidents, and free up existing road networks for those who do need to drive such as our emergency services.

There is potential for long-term jobs in the sustainable transport sector, from manufacturers, transport workers, construction workers, maintenance crew, technicians, tradespeople, station attendants, and more. The job potential is huge. And ongoing. While some jobs are created for building the initial infrastructure, many more will be required to maintain the service, provide upgrades and increase capacity as the city’s requirements change.

When you sign up to Walk This Way on November 9th, you’ll be supporting our campaigns to #TransformVictoria. Join us in finding the communities taking the lead in creating a safe climate future.