The Coalition government and ALP continue to refuse to rule out a new allocation of brown coal reserves for new mines in the Latrobe Valley. The Coalition holds the view that Victoria could even have a brown coal export industry.

The environmental, climate and public health costs of new coal mines will be enormous.

It is time to rule out new coal.

What is Brown Coal?

Coal undergoes several changes during its formation. Beginning as plant material, it is exposed to high temperatures over millions of years. It first becomes peat, before maturing into brown coal (lignite) and finally black coal. The water content of coal decreases at each stage, at the same time as energy content increases. Brown coal has a higher moisture content than black coal (up to 70% moisture), which means that it is not currently exported for economic reasons.

The federal and Victorian state governments are currently funding an experimental program, the Advanced Lignite Demonstration Program, with the aim of increasing the economic viability of brown coal for domestic uses or export. There are additionally a number of privately funded programs operating with the same objective.

At present, 92% of Victoria’s electricity generation is sourced from five brown coal power stations, four of which are located in the Latrobe Valley.

The Latrobe Valley contains a number of areas that hold large coal fields lying between 10 and 20 metres below the surface. These are located underneath essential agricultural land within one of Victoria’s key food producing areas, as well as towns, the Federation University in Churchill, and the secondary school also located on its campus. 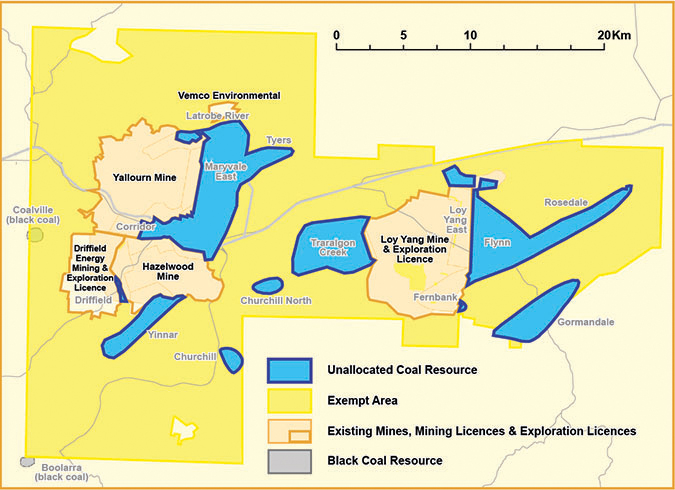 The Story So Far…

In July this year, it was announced that a fifth power station, Energy Brix, which manufactured briquettes for use in Australia and overseas, would be closing down. This announcement was partly a result of the 40-day fire that burned at the Hazelwood mine earlier this year.

The last time the Latrobe Valley was opened up to new brown coal allocations was in 2002 when three companies - Australian Power and Energy Limited (APEL), HRL and Loy Yang Power - successfully bid for allocations. None of the proposed ‘clean coal’ projects were developed, and APEL sold its allocation to another company, making OVER $100 million from the government-granted application. Treasurer Michael O’Brien has since described the 2002 allocation process as “a bit of a dud.”

In 2012, the state government announced that it intended to open up 13 billion tonnes of coal in the Latrobe Valley in mid-2013. Many of the companies planning on bidding for allotments were doing so with the primary intention of developing technology to produce products designed to economise export, such as transport fuels, briquettes, fertiliser, char and feedstock.

The government has not currently followed through on this promise, however its commitment to developing an export industry remains unchanged.

The state government has also proposed the creation of a new coal terminal. A number of possible locations have been identified, including  Geelong Port, Corner Inlet (near Wilsons Prom) and the Ninety Mile Beach, as well as a significant expansion of the existing Port of Hastings in Western Port Bay.

What Does This Mean?

Opening brown coal up for export would mean a huge increase in the amount of coal shipped from Australia to countries such as India and China. Considering the extremely high greenhouse gas content of brown coal, this would be disastrous in the context of climate change. It would also see the loss of farmland, impact on ground water, and be another threat to the health of local communities. It could also lead to a significant increase in the cost of domestic energy.

What You Can Do

The state government is sitting on this issue, as any new coal allocation in the Valley will cause significant unrest amongst local communities. Please help us to make this an issue in the build up to the November 29 state election, and let's force the main Parties to show their hand: will they rule out a new coal allocation?

Sign our petition to the Premier and the Leader of the ALP.

Contact your local Member of Parliament and let them know that you do not support further coal allocations in the Latrobe Valley.

Write a letter to the editor and send it to:

If you are from the Latrobe Valley, get in touch with Voices of the Valley, a local community group that advocates for Valley residents - http://www.votv.org.au/home

Drop in to Friends of the Earth and say hi, find out about volunteering, or become a member - we’re located at 312 Smith St, Fitzroy