It just wouldn't be a United Nations Climate Change conference COP in recent years without Australia at the Fossil of the Day Awards. And this year does not disappoint.

The failure to rule out use of Kyoto carbon credits to meet it's low Paris Agreement 2030 targets while demanding robust accounting and transparency is just too galling. Even best buddy New Zealand reckons, Crikey, using Kyoto credits is just too much.

And watching the Australian ambassador for the Environment on the panel of the US side-event promoting coal the other day...

As well as Australia standing back being silent over whether to 'note' or 'welcome' the IPCC Special Report on 1.5C. But hardly surprising given Environment Minister Melissa Price had rejected the findings of this report in the Australian Parliament when it was published in October.

And then there is Energy Minister Angus Taylor trying his damndest to help new coal fired power into the Australian grid, when firmed renewables are already a far cheaper option.

Or Prime Minister Scott Morrison telling students striking over climate change to be 'less activist', and Resources Minister Matt Canavan saying a student climate strike would lead to the dole queue, none of which deterred tens of thousands of students from joining protests around Australia organised by School Strike for climate action.

All this while Australia abolished a perfectly good carbon pricing scheme in 2014, to produce record rising emissions over the last 4 years.

So give it up for the return of Australia at COP24.

They thought they could hide behind the soot and smog of Katowice, but not today! Let’s welcome back Australia to the scoreboard – where have you been?

The Aussies are big on transparency and have a robust system of greenhouse gas accounting and report on emissions at home, which is why we know they have had four years of rising emissions after scrapping a successful emissions trading system. So how will they meet their target?

Through carbon credits, of course! While their neighbor, New Zealand, came out this week and announced they will not use Kyoto Assigned Amount Units (AAUs) to meet their Paris Target, Australia has remained silent in transparency and accounting in anticipation of using its hundreds of millions of credits to meet its target in a canter.

Let’s be clear, Australia is not interested in reducing emissions, it saddled up to the Trump sideshow on coal to promote its fossil fuel exports and Carbon Capture and Storage technology and, at home, its Energy Minister is fast tracking plans to use taxpayer dollars to build new coal fired power stations.

So, welcome back Australia – don’t you think it is finally time to wake up and smell the smog? 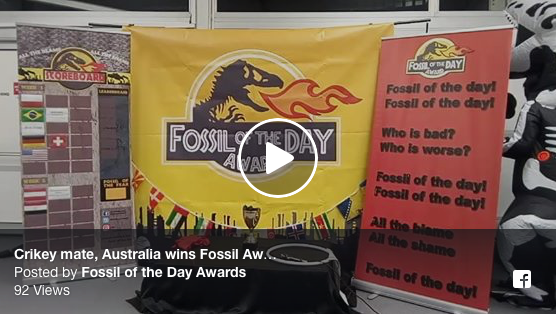 and visit the Climate Action Network Fossil of the Day webpage and Facebook page.