The Andrews government will provide $1.15 million in emergency funds to help arrest dramatic beach erosion occurring in Inverloch on the Bass Coast. The funding will go towards short-term projects such as the installation of a geotextile sandbag wall to help protect the Inverloch Surf Club.

Friends of the Earth say the emergency funding shows the Andrews government is increasingly aware of local climate impacts and prepared to act, but must show greater leadership when it comes to cutting emissions:

“It’s clear the Andrews government is paying close attention to the frontlines of climate change in Victoria. It will take a commitment to science-based Emissions Reduction Targets to limit the long term damage.”

The Labor government’s funding announcement comes in response to a community campaign sounding the alarm about the local climate impacts.

Bass Coast citizen scientist Aileen Vening has documented over 40 metres of beach erosion from rising sea levels and intensifying storm surges since 2012. Vening’s work has gained significant media attention and was presented at a town hall meeting attended by over 150 people in June. It has drawn attention to the imminent threat posed to the Surf Life Saving Club and nearby Bunurong Road.

“The sea level is rising, storms are becoming more severe – let’s not lose sight of that,” said Aileen Vening.

“The Inverloch coastline is a daily reminder of climate change impacts; it should also be a prompt for everyone to realise they have a role to play – by reducing their carbon footprint and lobbying for a low emissions, safer future.” 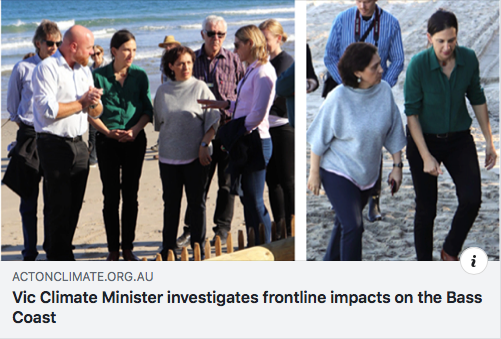 Victorian Minister for Climate Change Lily D’Ambrosio, who visited Inverloch in May, said the government was “preparing the Victorian coast for the climate challenges it’s facing through research, policy change and on ground action.”

Vening notes the Andrews government’s upcoming decision on interim Emissions Reduction Targets for 2025 and ’30 and the need for ambition.

“The Victorian government has legislated a zero net emissions target by 2050. The later we leave serious action to reduce emissions, the more costly and difficult it will be – so ‘heavy lifting’ now!”

Friends of the Earth has been pushing for bold and ambitious Emissions Reduction Targets since 2017. Our community campaign is calling for the Labor government to:

Friends of the Earth will continue to work with frontline communities such as Inverloch to ensure they have a strong voice in climate policy decisions.