Act on Climate update: Ramping up at the state level

The countdown to climate action continues. The Andrews government has less than nine months to set an Emissions Reduction Target for 2025.

The Federal Coalition has finally caught on to the process occurring in Victoria and they're starting to throw their weight around. Minister for Energy and Emissions Reductions, Angus Taylor, launched a media offensive in late June—branding Victoria’s targets 'crazy.'

Taylor's attack came with revelations EnergyAustralia might close the Yallourn coal power plant years ahead of schedule based on climate and energy policy.

Angus Taylor, the Federal Coalition, EnergyAustralia, and the Australian Industry Group are shaping up as the main Climate Blockers to ambitious climate action in Victoria. 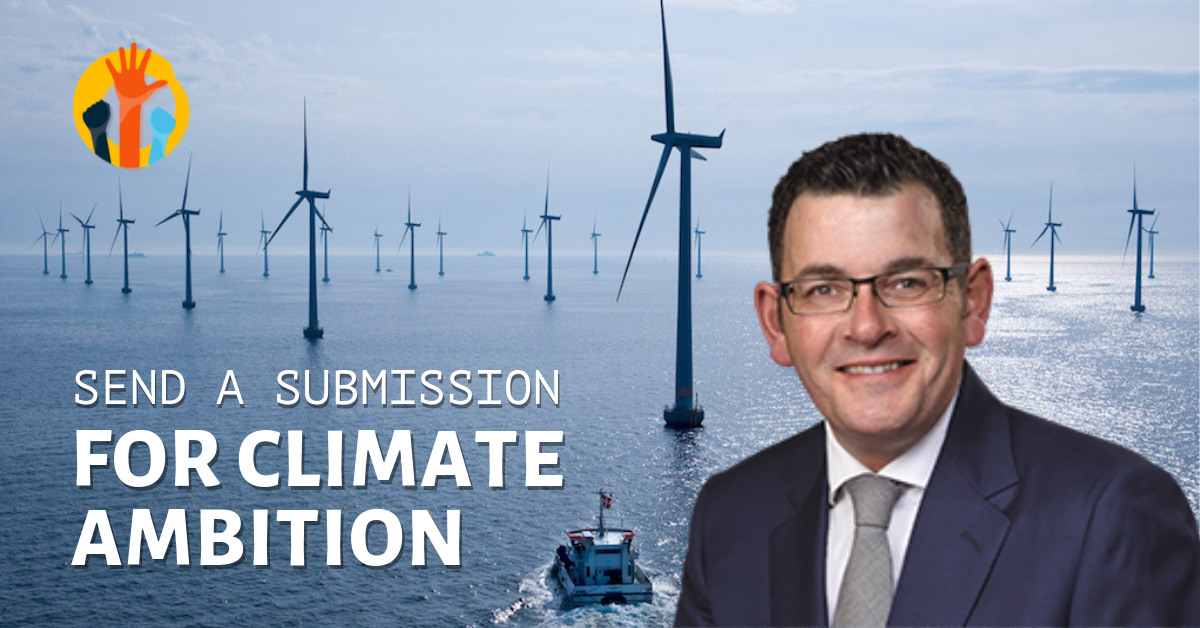 We've been campaigning for science-based Emissions Reduction Targets since the Climate Change Act was passed in 2017. But we're not the only players in the game...

Fossil fuel companies and big business are pushing for loopholes and low ambition—an outcome that will imperil our climate and communities. This is why we need to get as many submissions as possible to the government before the 22 July deadline.

We've put together an online form that allows you to send a strategically-worded submission in just one minute. CLICK HERE to send a submission for climate ambition!

Support for our online submission drive has been so great we smashed our target of 500 in five days and doubled it to 1,000.

Securing an Emissions Reduction Target that meets the 1.5°C challenge would require the continued rollout of solar, wind, and storage in Victoria and greater investment in public transport, among other positive changes. It's a moment to steer the state towards a cleaner, fairer, and more sustainable economy.

If you'd like an Act on Climate representative to give a presentation on the topic at your community group, workplace, etc, then please reply to this email and we can lock something in. 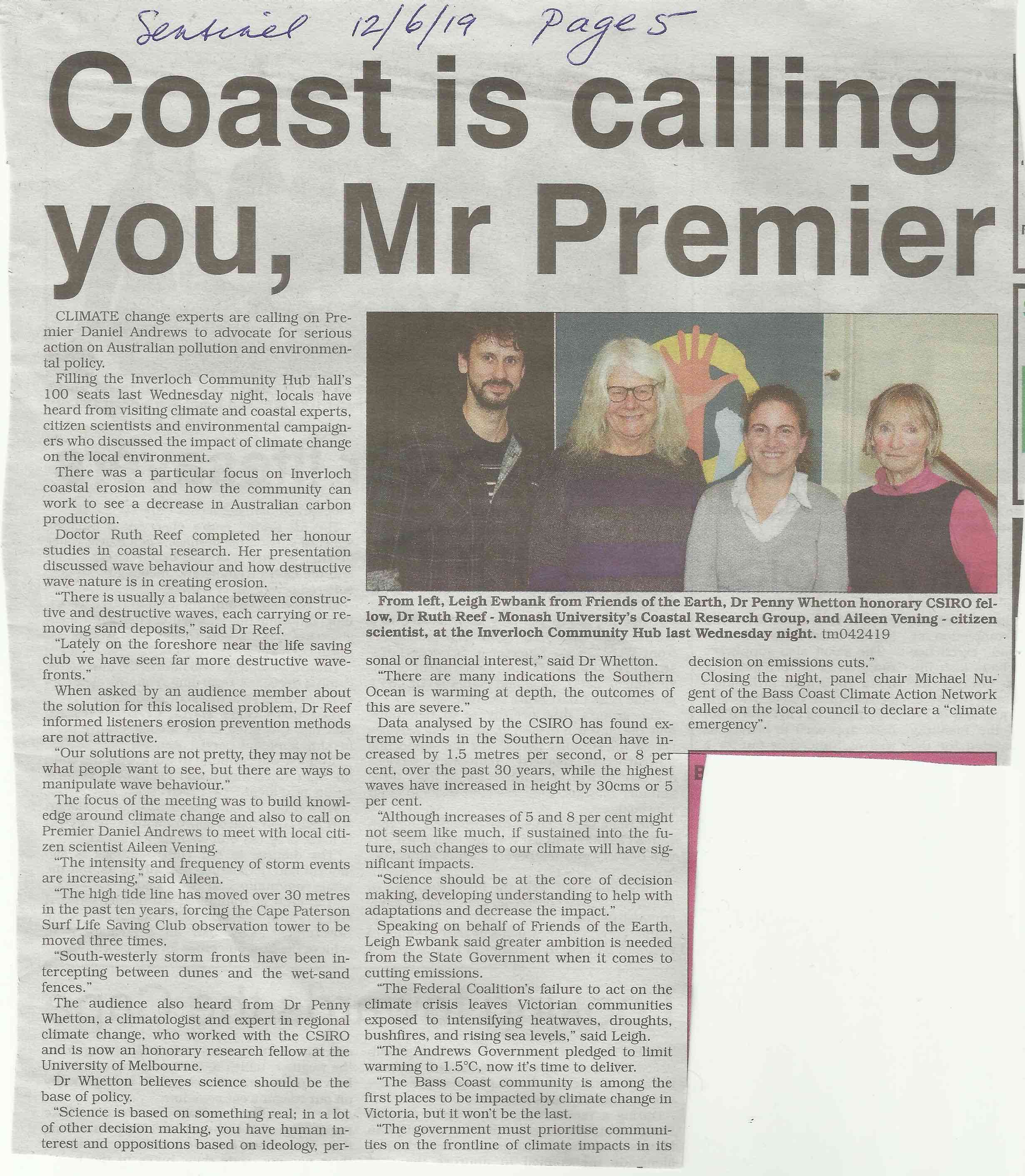 RAMPING UP SUPPORT FOR FRONTLINE COMMUNITIES:

For months we've been working with community members on the Bass Coast where climate impacts can't be ignored.

Act on Climate and the Bass Coast Climate Action Network organised a Town Hall meeting in Inverloch to raise awareness in the community about the impacts of sea-level rise and intensifying storm surges. Over 150 people attended to event.

We want Premier Dan Andrews to make an informed decision on Emissions Reduction Targets, so we're calling on him to meet with Aileen for a briefing on local climate impacts.

Will you sign the open letter to help get Aileen an audience with the Premier?

Inverloch is among the first communities to see the impacts of climate change, but they wont be the last. The state government must pay special attention to this case when it develops climate policy. 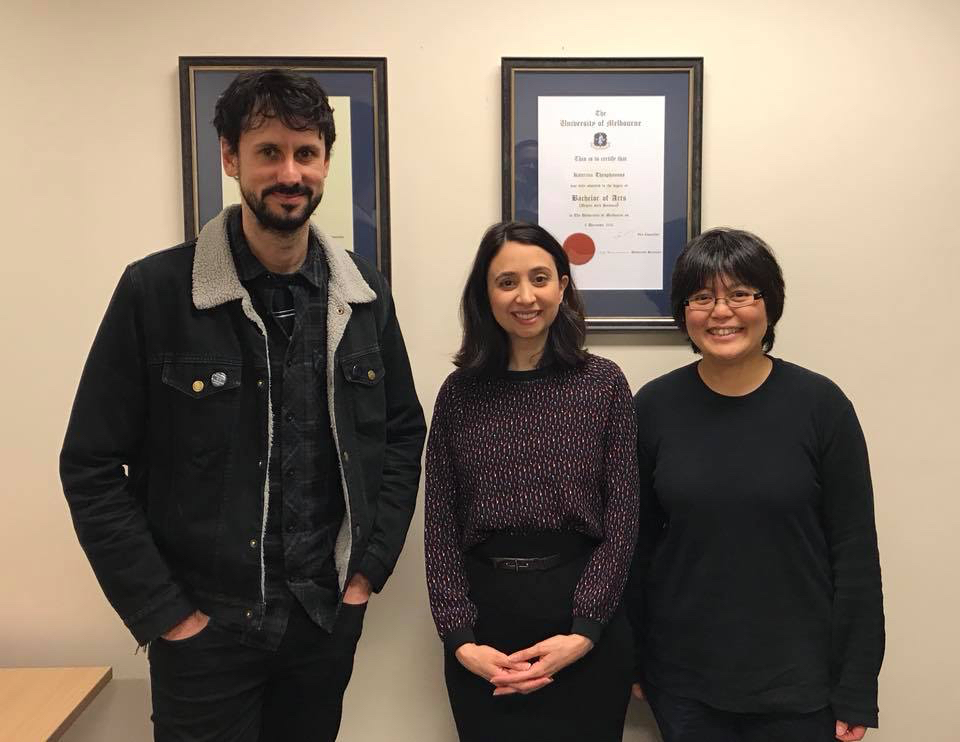 PUTTING CLIMATE ACTION ON THE AGENDA & HAVING IMPACT:

Act on Climate briefed newly-elected Labor MP for Northcote Kat Theophanous on our push for ambitious emissions cuts and long-term campaign for a Climate Budget. The seat is a hot spot for Friends of the Earth supporters.

Just weeks after our briefing, Premier Dan Andrews and Minister Lily D'Ambrosio visited the seat to launch the Solar Homes scheme at a Northcote-based solar business.

Similarly, Bass MP Jordan Crugnale raised the issue of climate impacts in Parliament by asking Minister D'Ambrosio a question on the government's response to beach erosion in Inverloch. We'll keep you posted about the Minister's response.

If you'd like to engage your local member on climate policy and don't know where to start, please reply to this email and we'll give you a helping hand.

ACT ON CLIMATE RAMP UP WITH INFO NIGHT: 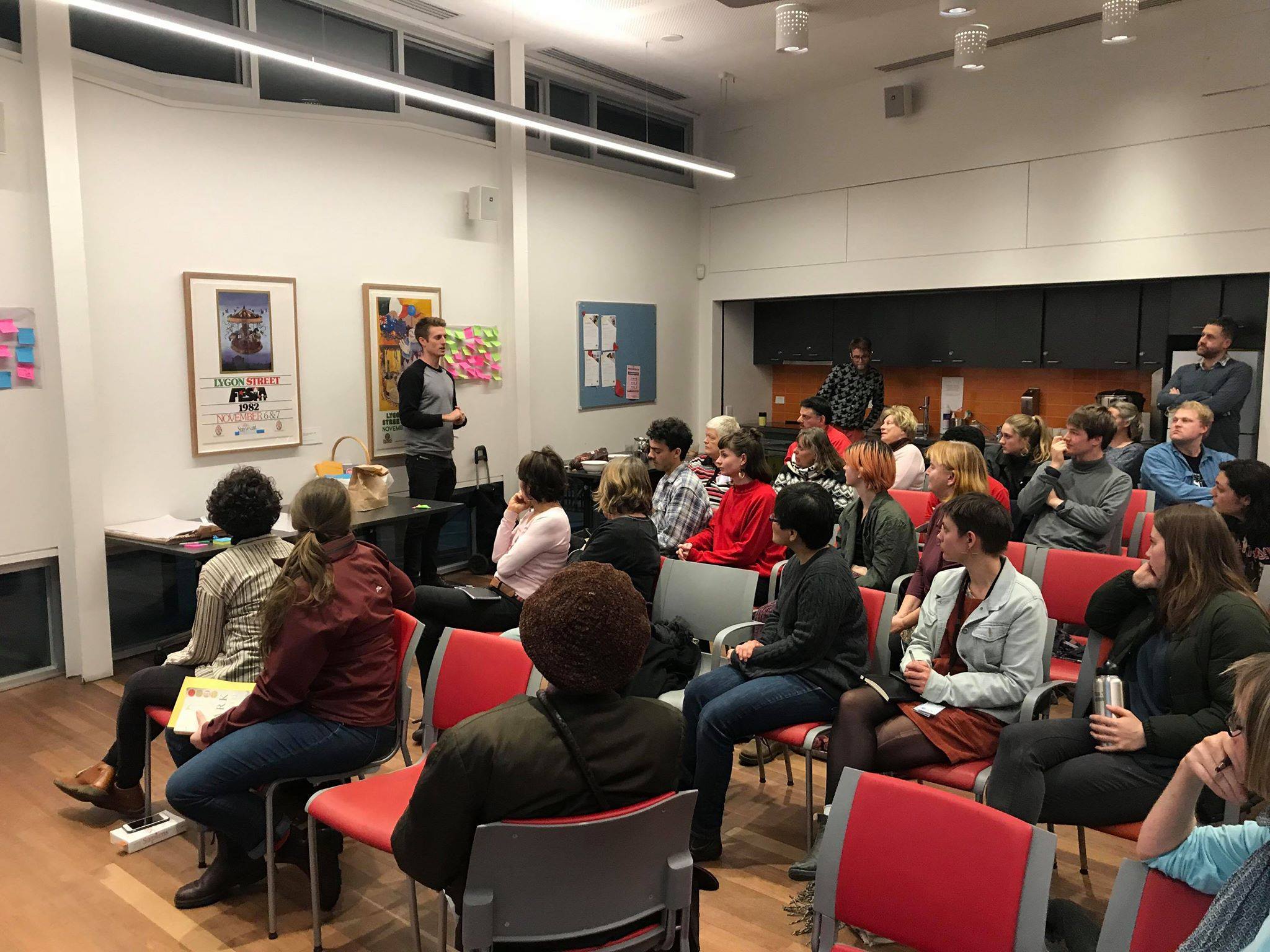 University of Melbourne expert Tim Baxter outlined the state's carbon budget and the cuts needed to limit global warming to below 1.5°C. Aileen Vening detailed what's at stake by sharing her presentation on climate impacts on the Bass Coast.

Look out Climate Blockers... The Act on Climate campaign is growing and fired up for action! 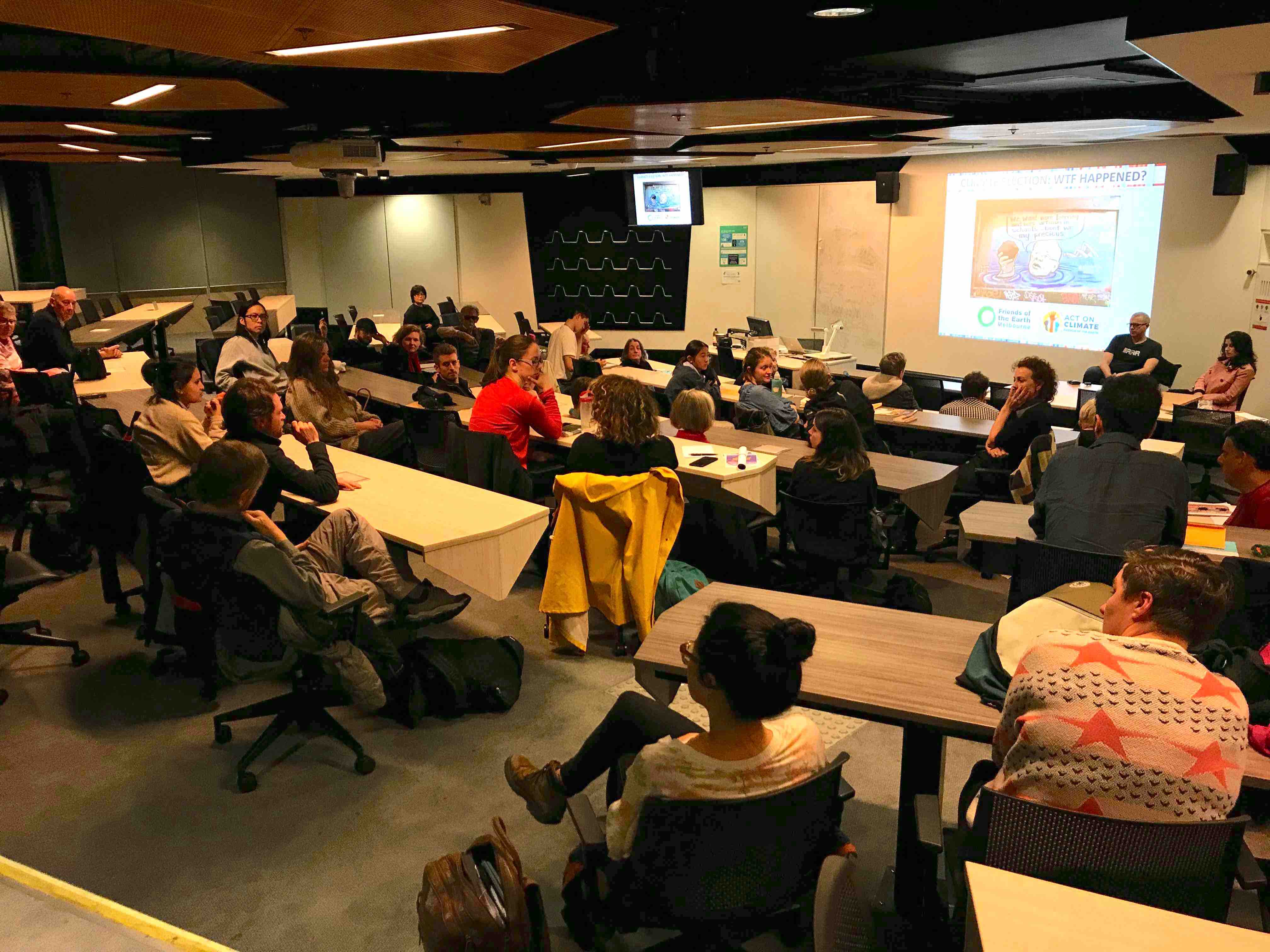 Around 80 people from across the climate/environment/social justice movement gathered at RMIT University to hear the analysis of author Jeff Sparrow and climate striker Fatima Kidwai on the 'Climate Election.'

Sparrow and Kidwai set the scene for a fruitful discussion on what worked, what didn't, and next steps for the climate movement. If we're going to win then we need to undertake a clear-headed assessment of where we're at.

While the title was tongue in cheek, we're wholeheartedly thank everyone who campaigned for climate action in the Federal election. Hats off to you! 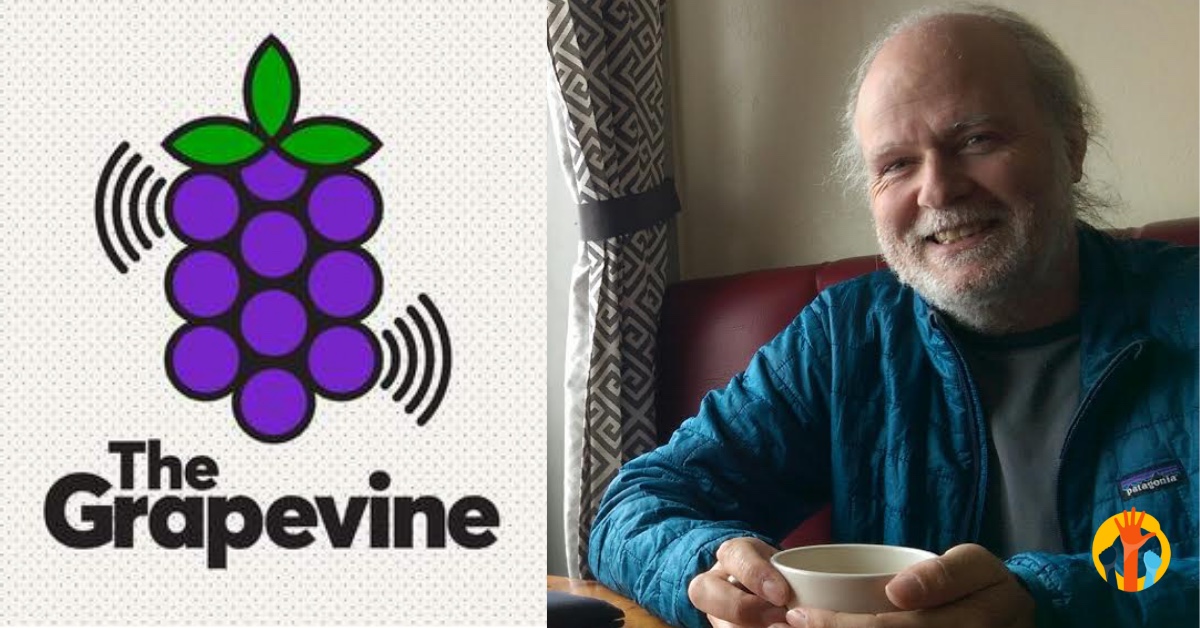 Friends of the Earth campaigns coordinator Cam Walker spoke with The Grapevine on 3RRR FM about Victoria's Emissions Reduction Targets, among other things.

Click here and tune in from the 19-minute mark.

There are plenty of fun events coming up in July and beyond. This month is all about strengthening ties in our community and skilling up. We'd love to see you at the following:

And remember, you're always welcome to join us for weekly Act on Climate meetings at Friends of the Earth's home base in Collingwood (Mondays at 6pm).