By now most of us are familiar with the little South Gippsland town of Mirboo North (population 2688 or thereabouts).  We know the name because it has been under siege by the threat of mining and unconventional gas for years.  A huge number of local people opposed Mantle Mining’s coal licence application at a public meeting in 2012, and theirs was the only town to host a community forum prior to the publication of the Reith Report.  The people of Mirboo North declared the town coal and gasfield free on the 9th of February 2014, with 96.6% in favour of the declaration. Since then they have seen the extension of the unconventional moratorium, community consultations, and now the Parliamentary Inquiry into Unconventional Gas.  The community has been on alert for a wearying length of time. 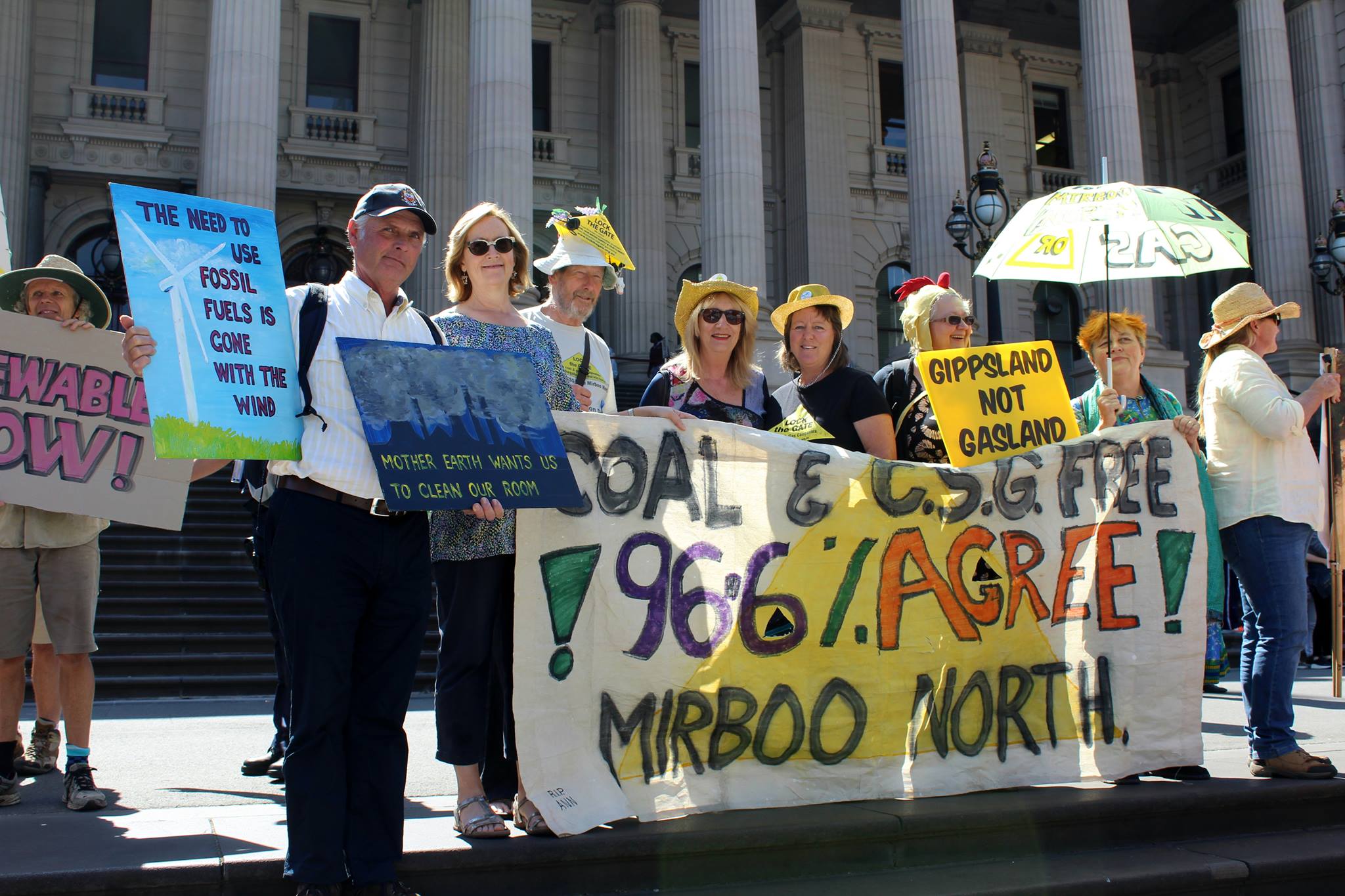 On Monday I talked with Marg Thomas, spokesperson for Coal and CSG Free Mirboo North.  Marg was on her way to the unconventional gas inquiry in Sale and I was fortunate to catch her during the hour-long drive there.  Marg explained that the pinger boxes were there to pick up the results of seismic testing being carried out in trucks around the area.  They were part of the Department of Economic Development, Jobs, Transport and Resources’ process in assessing for the likely impact of a coal seam gas industry.  The results of this survey will also be useful to coal mining.

Most of the locals were caught unawares.  In a meeting with the Department a few weeks ago, workers stated that they would come to Mirboo North to consult with people.  Their local paper advertising was ineffective, with maps too small to read.  Few had the opportunity to voice any concerns, as the department only informed those who lived on the roads where trucks and pingers are located.  Some residents worried that vibrations from the testing will trigger seismic activity.  A few were understandably angry and pinger boxes have been damaged, driven over and pulled out.  Marg states that this is not the sort of thing that Coal and CSG Free Mirboo North encourages or condones; nevertheless she understands the community’s frustration.

Marg explains the feeling in the community: “a mining company can get a retention licence when the exploration licence runs out and that can last for 10 years. They can get two renewals after that, so a community can be left under a cloud for 35 years.  We are feeling the stress and suspense, and are worried about the loss of land values.  We are all anxious about the exploration in Mirboo North.  It is a volatile situation, because people are exhausted and stressed and it seems never ending.

“It is sad to see the stress this causing, and I haven’t come across one person in favour of coal or unconventional gas mining in the area.”  This is despite Coal and CSG Free Mirboo North opening up an info centre, where people can come in off the street.  They are supported to write letters, sign petitions, get information “and often come in just to have a good cry.  The group is run off its feet.  There is always something to do: setting up meetings with ministers, talking to press, and generally keeping people informed.”

“The Latrobe Valley area is of great concern.  There is a licence at Callignee.  They lost people in the 2009 fires and the community hasn’t recovered.  Some people still haven’t rebuilt their houses, as they don’t know what is happening about mining. There is the Hazlewood Inquiry and the current CSG Inquiry.  Are they going to close down Hazelwood then open up Mirboo North for mining?”

Marg is also concerned about the impact of coal transportation: “if it does go ahead there will be transport of coal through to Port Anthony in Corner Inlet, just by Wilsons Prom.  It all seems to be happening at once.  Gelliondale has just got a retention licence for coal near Port Anthony.”

I asked Marg if the community was becoming too tired, giving up and moving out, but no: “people have dug their heels in. T hey are determined to stay and keep their businesses and livelihoods going.  They have great resolve.  Generations of families have grown up here.  They get up in the morning and say ‘my god I’m tired’, then they continue, as it’s so important to keep going. Venting sessions are essential. The mothers in these old families are the heart and soul of the community, and they are very sensitive to the issue of unconventional gas.”

There are also the tree changers: “people who have come from Melbourne, spent every last cent they had to get here and develop a little acreage to live in tranquility.  The threat of a coal mine will stop people from moving here.” And it is not promising for the young people: “these [unconventional gas and coal companies], are not good solid businesses providing work into the future. They are boom and bust industries.  There is no work for locals in the coal industry.”  But once there is a mine in the area, house prices go down and people can’t sell: “if you do get a coal mine, forget it, you’re stuck there.”

“APPEA (Australian Petroleum Production and Exploration Association) tries to sell the industry as a job provider.  They talk down the Gippsland area and say farmers need diversity, and our economy is not doing as well as it could.  People don’t need this. They appreciate the ambiance of the area.”  Marg said: “there are few jobs for locals in mining.”

Mirboo North is surrounded by rich agricultural land and produces dairy, vegetables, wine, organic fare and boutique foods such as berries, jams and homegrown garlic.  Lots of this delicious nosh ends up in Melbourne, and 25% of Australia’s dairy comes from Gippsland.  The town is also an attraction for tourists, backed by the Strzelecki Ranges, and at the beginning of the 13K Grand Ridge Rail Trail, in close proximity to forest.

“India and China are crying out for our farm products, and with the effects of climate change on this area we will still get reasonable rainfall. So if we want to save the food industry, and the jobs it provides, save South Gippsland.”

And the more support we can give from Melbourne the better: “ we are really happy to be creating stronger links with Melburnians. It is very important to have this relationship.  Our food goes to Melbourne plates.”

And I, among millions, don’t want to see the end to that.